I am looking to take my kids out for an early (5:30p) pizza dinner tomorrow evening. We were going to go to Regina’s in the North End, but there is a 3p Celtics game. I prefer to save trips to the North End for days when there is nothing going on at the Garden. Our parameters are great pizza and someone we won’t have to wait too long.

We’re not fans of Santarpios. We like Babbo and Flatbread, but have been to both a lot lately. We loved A4 pizza which has unfortunately closed, but find the original Area 4 to be very inconsistent. We have been wanting to try Picco again, but the wait was insane (90 min) the last time we tried to go there, even on the early side. Pastoral, meh. Gran Gusto service can be very slow, so not somewhere I love bringing young children.

What about the new Frank Pepes; any good; what about the wait that time? The new Max and Leos at Game On; is it as good as the original? What am I missing?? Any suggestions would be greatly appreciated.

I thought the pizza at Frank Pepes was good, but the vibe wasn’t great - there is a waitress but it felt like an order at the counter place, almost. What about Otto in Coolidge Corner? I’m a big fan. Or Babbo?

How about Flatbread Company in Davis Square?

What about Otto in Coolidge Corner?

That’s a good call. It’s been awhile for Otto as we had a food safety issue with one of their salads at the BU location several years back. It left a really bad taste, but I do like their pizza.

How about Flatbread Company in Davis Square?

We love Flatbread but have overdone it a bit. It has been a family favorite since opening and now it is a frequent stop on the kiddie birthday party circuit.

Has anyone tried the Anthony’s Coal Fired in Reading? (right by Jordan’s Furniture). I have been to locations in Florida, all of which were excellent.

I never liked the BU Otto location - the one in Coolidge is a lot better.

How bout Posto in Somerville?

We ended up at Otto in Coolidge Corner, which worked well for our needs. However everyone agreed that the pizza was just fine, nothing more.

We snagged the last table before they went on a wait shortly after 5:30. Service was fast and friendly, and the atmosphere in the restaurant is nice. We got a half cheese, half roni pie, and the garlic white bean and spinach. Both were cooked well and had good crust decent flavors, but just nothing that stands out. We get delivery from the HSQ location a bit, so maybe we just eat too much pizza and get fatigued. There was nothing bad about the pizza, but also nothing that left us wanting more.

We should have dealt with the NE crowds and went to Regina. Next time…

We ended up at Otto in Coolidge Corner, which worked well for our needs. However everyone agreed that the pizza was just fine, nothing more.

i have given the cc location 3 tries. they are out. last time my slice was so oily it made me queasy and i couldn’t finish it.

i have given the cc location 3 tries. they are out. last time my slice was so oily it made me queasy and i couldn’t finish it.

I don’t mind a little grease, but my wife was definitely doing some blotting which prompted my daughter to ask: “please don’t dry off my pizza”.

I’m late to the game but hopefully this will give you another option for next time. We’ve REALLY been enjoying the pizza at Brewer’s Fork in Charlestown lately. We live in Union Square, Somerville and have been maybe 5 times now. It’s easy to find parking on Sundays. I do want to note that we’ve only been for brunch so I can’t speak to any wait times at dinner. I know they don’t take reservations but we’ve never had any problems at brunch so hopefully dinner is the same. They are very friendly to our 17mo son and he loves the pizza as well, which makes me unbelievably happy.

I hope you enjoy!

I’m curious to check out the new location that Otto is opening in Arlington (the old Comella’s space). I have to say, nothing beats the original Otto in Portland (always the wine bar side).

This is great, thanks. I was hoping to find some places which weren’t even on my radar. We have a family pizza night at least once a week, so we will definitely have occasion to try Brewer’s Fork in the future. Where do you park when you go there?

So, on Sundays it’s free street parking so we’ve been getting spots right on Bunker Hill Street very close to the restaurant. I tried to take a screen shot from Google maps - not sure if it worked. But hopefully you will get the general idea.

There are also some metered spots on Moulton Street (the little street that the restaurant is on) and the past two times we’ve been there we have totally forgot and laughed as there have always been at least two spots available right in front. Who knows though, we could have just gotten really lucky! I hope you enjoy! 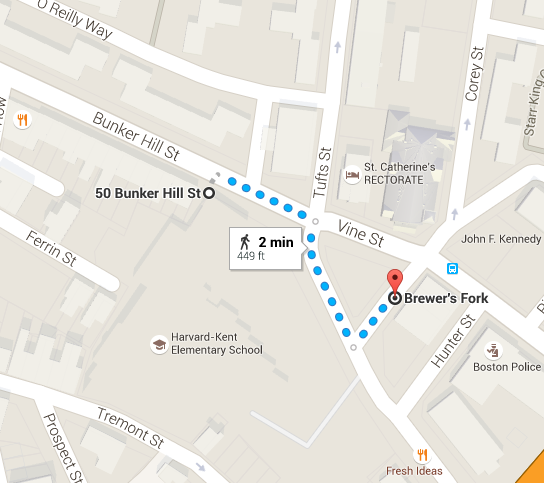 I’m late to the game but hopefully this will give you another option for next time. We’ve REALLY been enjoying the pizza at Brewer’s Fork in Charlestown lately.

Brewer’s Fork is a great suggestion! Wish I’d thought of it. The clam and bacon pizza is really good.

A quick update on our excessive pizza consumption. We finally tried Frank Pepe’s in Chestnut Hill last week, and followed with the original Regina’s in the North End yesterday.

The verdict? Give me the original Regina 8 days a week.

Yes, I have tried Anthony’s in Reading. If you like dark crusted, well cooked pizza dough, you will like Anthony’s. We weren’t that hungry, so shared a small and the size was fine, it was almost too dark for me.

The couple next to us were raving about theirs and it was huge and the crust looked a little thicker, which could handle the well done crust.

We didn’t have reservations and waited about 1/2 hour for a table on an early Saturday lunch (noon).

The place was packed, so perhaps you can get a reservation.

I am definite outlier here.
I do not like Brewers Fork pizza.
We’ve tried it 5 or 6 times. We know the consensus is it’s great. Here’s a different voice.

For us, it’s thin crust, charred on the bottom, doughy on the inside. Every time. We like thin crust. We don’t mind charred. We don’t like doughy.
We’ve tried the bacon and clam twice… The bacon was undercooked and very greasy, drowned out the clam taste, and made the crust soggy with bacon grease…
For us, no fans of salt, the crust is under salted.

In general, and we’ve had lots of dishes here, they are either vastly over salted or completely under salted.
We do like the atmosphere and the welcoming of children and families. That’s a plus for us; we come without our teen but like seeing the little ones.

There is a small parking lot just to the side of the restaurant, which often has spaces so you don’t have to try to find a street space.
Service is usually welcoming and friendly, unless the server ignores you while talking to peers at the pizza oven. Or, when you ask about a brunch dish before ordering, says, I don’t know, I never ate it. and only comes back after you’ve eaten to explain what the dish is. Couldn’t ask someone else?

Exhaust system could be better.

It doesn’t work for us, but obviously others love the addition to the neighborhood.

Has anyone mentioned Babbo’s yet? This restaurant surprises me every time. Really good pizza, some interesting salads, and at a great price point. The sausage is really good! My only issue is, getting there and back home takes more time than I generally devote to grabbing a pizza.

Second that…we are hooked on Babbo’s. Love the prosciutto and arugula pizza (sadly not on the current menu) and the various salame/salsiccia incarnations. But do try the fried smelts.