If you try it again, try the square,. I agree the round is average to a little better than average.

I believe it is an entirely different place. They cook the pizza in that other building. Never get take out there.

The pizzas from Keyport’s Old Glory are very good. In or take out consistent and they offer decent variety but you can also customize.

Hi all, first post - I live in Howell for almost 20 years now by way of Brooklyn. Of all the pizza joints in Monmouth and Ocean counties. IMO, the very best by a good margin and consistently so is Cucina Alessi in Manalapan (shopping center of Wegmans) off Route 9. It’s been unbeatable regardless of the type of slice or sicilian variety.

where to start…Maruca’s Tomato Pies on the boardwalk in Seaside is our sentimental favorite…grew up eating their pizza in the summer and we’re still big customers. Located in JR’s Bar on the Seaside Hts. boardwalk. I’m in love with Porta in Asbury, but to be specific it’s Pizza Napoletana style, not a big round typical pizzeria pie. The 14 1/2 at Porta I hope to be buried with to take to the other side. Hot Sopressata, house made mozzarella, housemade ricotta, San Marzano, Calabrian chile flakes , evoo, oregano…it’s a absoulte joy to eat. Down here in my part of the shore there’s a PORTA vs TALULA’s rivalry…both produce the same style of brick oven pizza. Talula’s is ok…Porta rocks my world. Most of the pizza down here just is…ok. 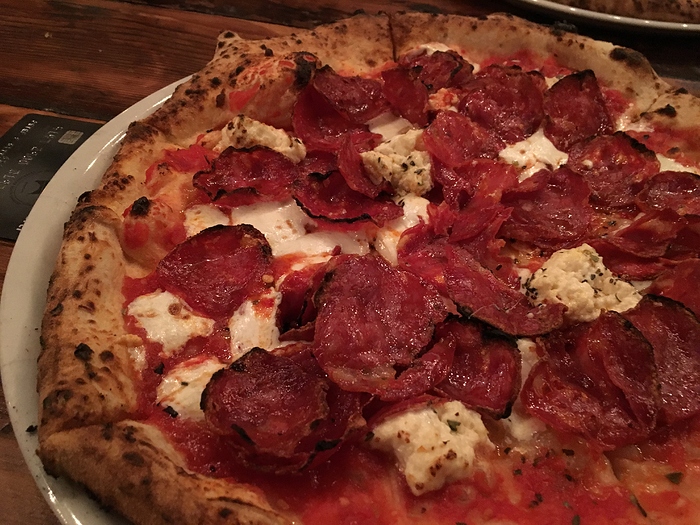 I’m with you on Porta–been going there since they opened, and I don’t think I’ve EVER left thinking the food was anything but excellent. But we’ll have to disagree on Talula’s–when it comes to that style of pizza, I think their Beekeeper’s Lament may be my favorite EVER. ANYWHERE. Hot sopressata w a drizzle of honey. SIGH… But it’s a very tight race between the two, imo.

I first had that honey/chile napoletana pizza at Roberta’s in Brooklyn and Manhattan…they were the first, everyone else followed…their version is my favorite…Talula’s just didn’t pack , imho, the punch that it should have…again, for me. my 60th Bday party was at Porta last year, we had our daughter’s sweet sixteen there, graduation parties, birthdays…i should be their pr person LOL.

My wife and I are regulars at Porta. Usually we are quite happy with everything and really enjoy the space - we’re bar people. There have been occasional service issues - these have been handled from ‘very professionally’ to ‘are you really a manager?’ They can be a bit short of adults from time to time.

I don’t even know what this is but I’m about to watch the Dodgers game and I see a commercial for a cheezit stuffed pizza.

Ok so I googled it. Greg this reminds me of one of your reviews lol 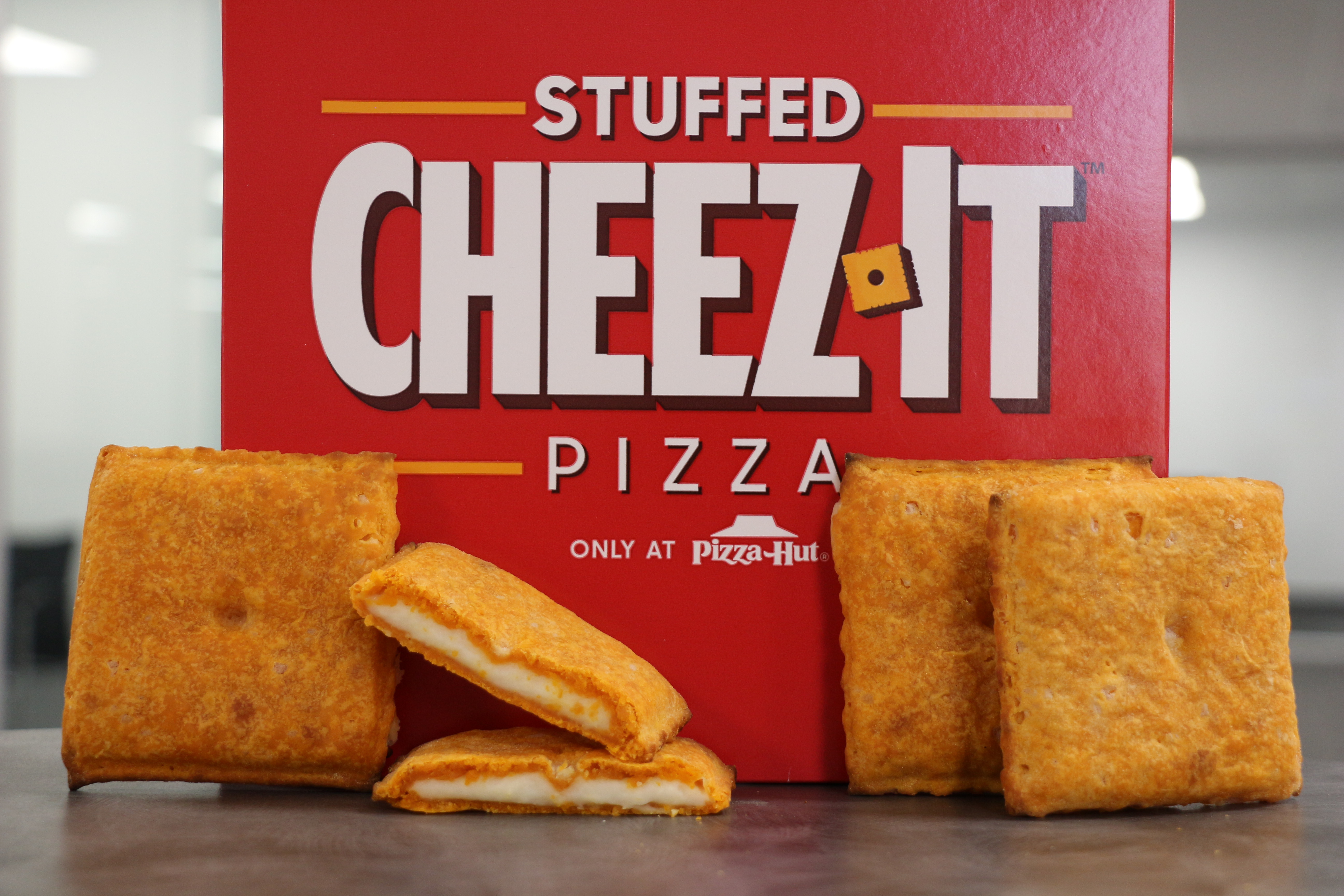 Here's what the crazy new cheese concoction from Pizza Hut tastes like.

…like a cross between a flat mozzarella stick and a memory foam throw pillow.

I’m geting my flame suit on now but back in my college days pizza hut, lots of beer and possibly something else went together pretty well!

also, did I ever tell you guys the story of the “Chad special”

Chad worked as a delivery guy for a local pizza joint in Daytona where I was in college, not pizza hut. He had a side hustle and you could call up the pizza place and order a “Chad special” and also some pizza if you wanted. A Chad special was 20 so we would pool money together and get a few Chad specials and a few pizzas…incredibly convenient. The manager and everyone was in on it so you didnt have to worry about anything. College…I want build a time machine and go back.

I used to end nights with Dominos. Only catch was the pizza sucks. I only ate the cheesy bread sticks. They used to be unreal, esp to soak up cheap beer by the dozen. Only problem was about 50% of the time I’d get someone on the phone who would only deliver if we order a pie. I’d explain to them that the cheesy breadsticks cost more than a pie and I was ordering two. About half the damned time they would not budge and I’d have to throw out a 5.99 dogs&t pie just to get my breadstick fix…Tried them a few years ago while waiting to get my car serviced next door to a location. I don’t know if perhaps they changed the recipe or I was just that drunk, but they were HORRIBLE.
On a related note- I too would love to go back to college (would like to keep my current salary though)

New pizza place coming to Atlantic Highlands. And no, its not Una Pizza Napoletana. From my blog:

While everyone is waiting for the seemingly delayed Una Pizza Napoletana, another new pizzeria is opening in Atlantic Highlands. Julio’s Pizza Company will be located on 1st Avenue roughly 125 feet away. However, this would not be the first time the town saw two pizzerias operating within close proximity of one another—Julio’s will occupy the spot formerly used as 1st Avenue Pizza, which was literally next door to Gianni’s Italian Specialty Foods, which also sold pizza.

There has not been much fanfare regarding Julio’s, whose grand opening will be this Thursday, October 17th at 11 am (the soft opening occurred today). I just happened to come across a few posts on Instagram and decided to do some investigating. Color me surprised when I realized that another pizza place was coming to Atlantic Highlands. Their website is up, but there is currently no menu. Some digging online reveals that the owners are Erin Willet and Brendan Smith. Julio, the inspiration behind the restaurant, is actually their dog!

We would like to wish the folks at Julio’s the best of luck with their new business. I am looking forward to stopping in for a slice or two!

Could def see both places surviving as they will likely look to hit different segments of the market. Nice to see more stuff opening in AH. One of my fav downtowns in the area

Soft open was today, no?

I wish atl would let a few food trucks open. They have the space. It amazes me they dont want more taxes and traffic in town. I could be missing something though.