Something off my bucket list – had it ever been on it 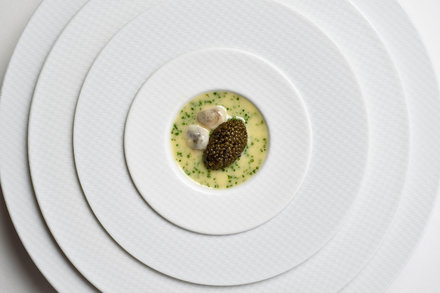 At Thomas Keller’s Per Se, Slips and Stumbles (Published 2016)

A new look at one of the nation’s landmark restaurants.

Choice quotes: "I don’t know what could have saved limp, dispiriting yam dumplings, but it definitely wasn’t a lukewarm matsutake mushroom bouillon as murky and appealing as bong water. "

“Mr. Keller wrote in “The French Laundry Cookbook” that poaching lobster in butter “cooks it so slowly and gently that the flesh remains exquisitely tender — so tender some people think it’s not completely cooked.” There was little danger of anyone’s making that mistake on two occasions when the lobster was intransigently chewy: gristle of the sea. The first time, it was served with a sugary Meyer lemon marmalade and a grainy chestnut purée that tasted like peanut butter to which something terrible had been done. Subsequently, it was paired with a slick of cold oatmeal.”

Ouchie INDEED! Quite a shock to read that one… I posted in the Comments and the gist of it was that when I went 2 years ago, the food was fantastic, and the experience was WAY more fun than I expected. I figured it would be stuffy and it was–until my friends and I showed OUR personalities. The staff enjoyed us and made the entire meal more wonderful.

I’m with you. Unless someone else had been paying, no way. I can buy airplane tickets and ‘stuff’ for that kind of money. And NOW if someone wanted to pay I’d suggest somewhere else. It really did sound ‘off.’

I especially liked “…one of the worst food deals in New York.”

No words yet from the restaurant or from Thomas Keller.

If we consider Per Se as part of the Keller chain, the issue with chains is that its difficult to maintain the level over time if the head person cannot devote enough attention to any one place, even if they have videoconferencing system connected to Yountville.

But Per Se has been open for more than ten years and it seems these are fairly recent problems. His absence from the kitchen didn’t seem to be a problem in the past. NB: I’ve not eaten there.