What do you all think about this list? I’m just happy to see my favorite pie from Talula’s… 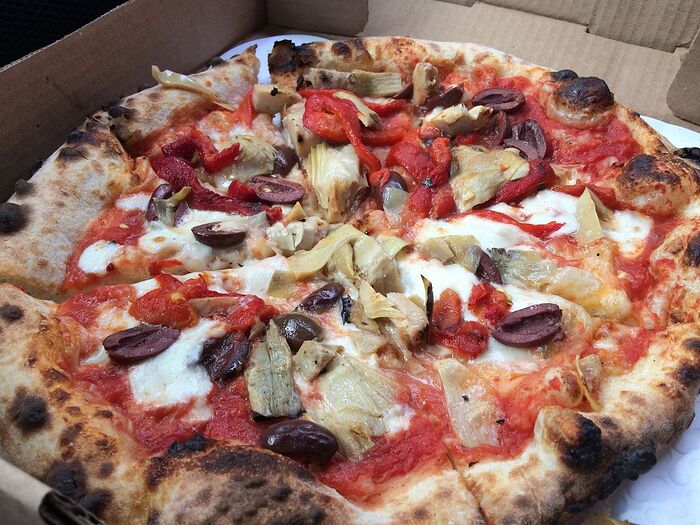 There's some major movement in our semi-annual rankings, including a new number one choice

finally love for deninos Brick- I’m telling you- it’s great if you like thin crust pizza…anything with sausage or the garbage pie, MOP, some fried calamari…can’t miss…

Friends have been saying we need to get over there…glad to hear you like it!

You have to like thin crust/crispier pizza- but it’s amazing…anything with sausage is great too…stick traditional/old school & stay away from any newer types of pies…can’t vouch for anything other than pizza, calamari, chicken fingers…chicken/meatball parm heros were good- anything else is not on the SI menu thus off my radar…

Another trip to Deninos brick and still phenomenal . Love the garbage pie, meatball sausage pepperoni onion hold the mushrooms. Money in the bank. Fried calamari and a cold beer. Can’t be beat. Have noticed that the sauce for th calamari has gotten more of a kick over time though.

Ironically while picking my son up from college for the Easter weekend, he was hungry so I picked a random exit and was at Delorenzo’s Hamilton Location. Having heard of them, but never having tried, I decided there was no better time than NOW to give them a shot.

My opinion; not very impressed. I’m not a big fan of thin crust pizza to begin with so that was “strike” one with me. I got the half Trenton and Half white (ricotta and garlic) and both were fine, but really nothing I found exceptional about either.

I will say the place is big, nice and full service. It was pretty busy for a Friday afternoon, and I certainly wouldn’t shy away from going back, but for it to be #1 on this list, not for my tastes.

From what I understand, the two Delorenzo locations share family roots but each is now independent of the other. The Robbinsville location seems to get the acclaim, and they even have the original sign from the old Trenton location hanging inside. I’ve been there a couple of times and enjoyed it. I have yet to try Hamilton.

bumping this one up since I couldn’t find a better one to do so on. anyone have any good or new pizza spots to recommend these days? I think Rosie’s in PPB is highly recommended? Locally I keep meaning to try Nicky’s in Oceanport as I am a fan of the thin crust. Just had another Pete and Elda’s pie and love it.

Not so locally, had a really really good pie in Peddlers village a cpl weeks ago; one of the better ones I’ve tried. Nice thing crust, personal size pie with ample cheese and the tiny slightly spicy pepperoni. Highly recommended.

Rosie’s was excellent, imo, and I’m still a fan of Porta, Talula’s, and Medusa (all in Asbury Park).

Rosies is great, definitely get there. The crust is amazing.

I forget where you are but the relatively new Basiles up in Middletown is good too, in the traditional slice joint way. Not a destination place, but currently my favorite around here.

This is why a site like HO is so great! Now I can sit here at my computer and be angry at myself for lacking the motivation to get my lazy ass to AP and Porta and get a free pie.

And definitely get the round pie with added provolone at Rosie’s.

was a fan of their restaurant in Staten Island back in the day- local neighborhood spot…sadly its gone but now they have a slice joint empire…need to check this place out didn’t realize it was open…
did you try the signature artichoke slice?

I have not. Actually didn’t realize it was a thing until my last stop in…and then I forgot.

Is this place in the old pathmark shopping center?

Metsfan, brothers and vals have thin crust too.

keep meaning to try them too- really need to get to brothers…that’s prob my next new spot
Problem with Vals is that if I’m over there I’m heading to Barneys or Surf…
Think (Basilles) it’s across the street in the J&M and Bottle King spot, but I could be wrong- but that’s def the vacinity.

OK I was there one time a while back. I’m not sure it was the same owner. I had a half decent cheese steak. This was a door or two down from Sono.

Think (Basilles) it’s across the street in the J&M and Bottle King spot, but I could be wrong- but that’s def the vacinity.

This was a door or two down from Sono.

Yes, that spot. As metsfan said, only open a few months with these owners.