Pete Genovese lists what he considers the best bbq spots throughout the state. He also includes a list of what he calls “personal favorites” and another list of places recommended by readers.

I had no idea that there was such a boatload of bbq spots in NJ, so no surprise that I’ve never heard of most of them.

Of those on his best list, we’ve been to Big Harlie’s (Sayreville), Jersey Shore, and Local Smoke (Neptune). Also on that list is Mighty Quinn’s (Clifton). We’ve been to but at the flagship in Manhattan right after it opened and so way before they began branching out. The only place on that list I’ve heard of but not been to is Fink’s. (Dave Fink was a member of eGullet when I was active there.)

We went to Big Harlee’s once for lunch. It was new at the time, and we were the only patrons there. Maybe they were still getting their act together because I thought the ribs and sides were awful. Now I’m thinking we should check it out again. I’ve already mentioned elsewhere on this board that I was underwhelmed by our one visit to LS Neptune but plan to give the new Red Bank location a try. We’ve been Jersey Shore twice. The first time was right after they opened. Everything we had was well-executed and tasty. Our second visit was a few years later and the food was not as good. That was in 2013, so perhaps we should revisit. As for Mighty Quinn’s, we liked the food and have been meaning to return but haven’t gotten around to it. The flagship is way more convenient for us than schlepping up to northern NJ since we can walk to it – or take a very short bus ride – from our NYC apartment.

Surf is listed at the very end of the readers’ recommendations category. Reports about our two visits there are in the Surf thread.

Roz, another visit to JSBBQ is definitely in order! Imo, they’re putting out some of the best wings and brisket I’ve had anywhere! I’m particularly fond of the Kayla wings, which are a mix of sweet/spicy, but they have a bunch of flavors worth trying. Their collards are also excellent, as are the fried brussels sprouts…

We went to Big Harlee’s once for lunch. It was new at the time, and we were the only patrons there. Maybe they were still getting their act together because I thought the ribs and sides were awful. Now I’m thinking we should check it out again.

We really like Big Harlie’s. Our standard order is the six-rib dinner (“Large Rib Dinner”), which we split. I will agree their sides leave something to be desired–we stick with fries and the beans, which are the “least bad”. Didn’t like the collard greens at all–and I like collard greens. (Never tried the mac and cheese, though, or the various other salads.) I know BBQ places are not bastions of healthy eating, but it does seem like almost every side is unhealthy. Would love to see one offering corn on the cob as a side.

(Parenthetically, whenever we eat at Red, Hot, & Blue in Cherry Hill, my sides consist of two orders of fried okra.)

As our visit to Big Harlee’s was in February 2014, I had to look at my photos to see what we had. We each ordered a rib dinner: 3 ribs served with two side. Mr. RBI chose macaroni & cheese and dirty rice with sausage. I picked baked beans and cole slaw. His sides were plated; mine came in containers. We shared all of them.

Frankly, since you agree with my assessment of the sides, i.e., poor, I’m not going to bother trying Big Harlee’s again.

We’re going to the Red Bank Local Smoke for lunch later. Given the good reports so far, I’m hoping it’s better than our disappointing experience in Neptune. 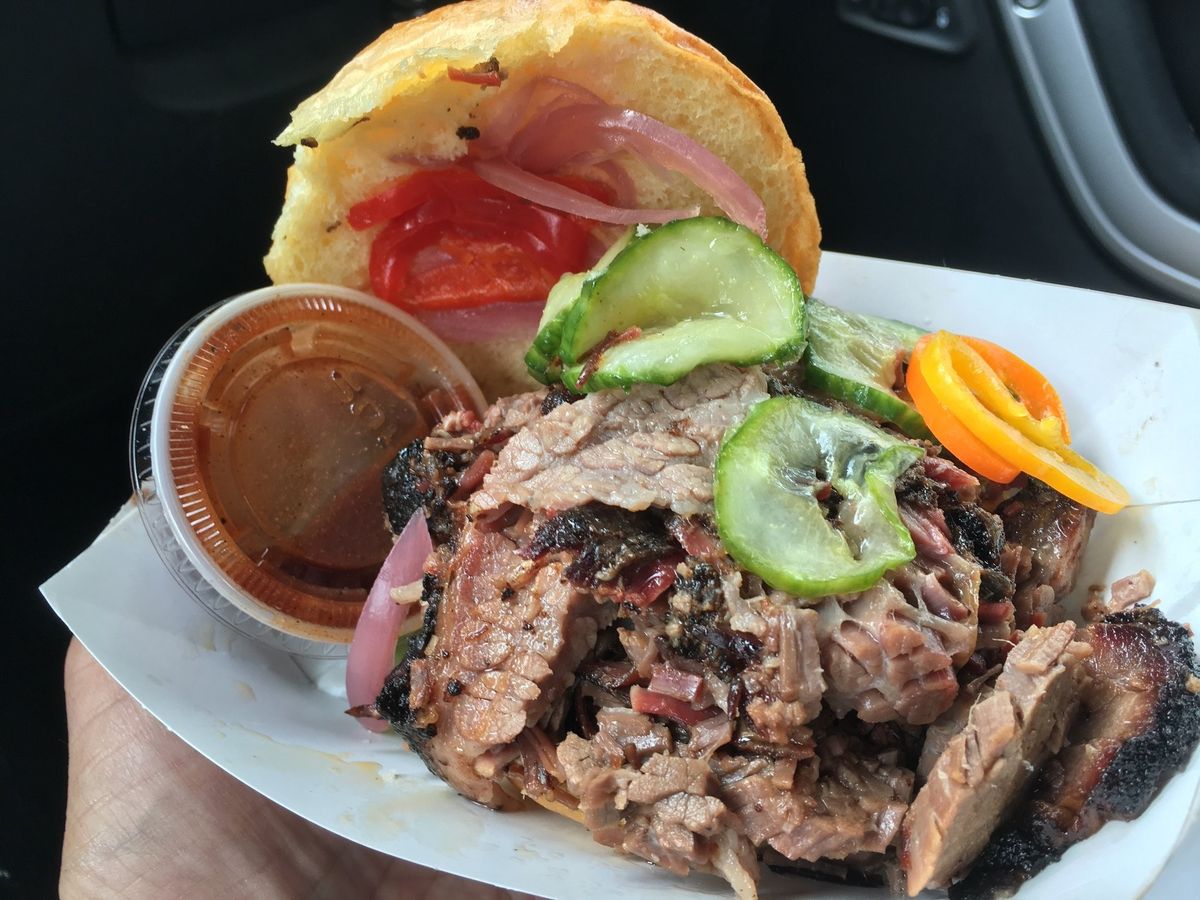 Here are our expert picks for the state's best BBQ joints.

Has anybody been to Kimchi Smoke? That I gotta try

I ordered takeout from Kimchi Smoke last year & it was excellent. Chef Cho gives a nice spin on Korean BBQ.

I ordered the K Town Dog ( Hot dog with Bourbon Chipotle sauce (BCS), smoked Kimchi Chili, and scallions), Korean Redneck Tacos (smoked pork shoulder, BCS, Korean slaw, & Kimchi), Cholander Mac & Cheese (3 cheese blend topped with pulled pork, BCS, & smoked kimchi), Chonut 2.1 (smoked brisket, smoked kimchi, cheese, bacon, scallions, on a glazed donut), the bulgogi burger, smoked kimchi, and baby back ribs. I really enjoyed the Chonut 2.1. As ridiculous as it sounds, it was very well balanced. the glazed donut really added a nice sweetness to offset the rest of the ingredients. The Korean Redneck tacos were also excellent. The Hot dog was very good and the baby back ribs were very meaty and not fatty at all. The mac & cheese was very good. I loved the BCS sauce & the smoked kimchi. The bulgogi burger was just a little too tough & fatty. However, it might have tasted differently if I had it fresh & hot, instead of taking it home.

Damn. Too bad this is so far up north.

You’re welcome. Yes, it’s even a half hour / 45 minutes further up North past where I live. He used to have another location closer to me in Montclair, but that location has since closed. It was further down Bloomfield Ave. where the parking situation really sucks.

Hey, how come Big Ed’s never makes any of these PG lists?

I was thinking the exact same thing. Big Ed’s is by far my favorite in the area. The ribs are always amazing. I can’t comment on the rest of the menu since I always do all you can eat baby back (Cajun dry rub and BBQ!)

We, on the other hand, haven’t gone to Big Ed’s in literally decades, even though it’s only about a mile away. 1) We don’t think it’s very good, and 2) the AYCE menu means small eaters like us get grossly overcharged.

Does anyone bbq any of your signature NJ food such as your revered Taylor Ham?
Maybe not scrapple though.
Does anyone serve fries or are most places
Set up more as Southern/Soul Food places?
Things aren’t much better in the PNW, if it’s any consolation.
My classic bbq joints in the KC of my youth were typically like a hamburger stand with a variety of bbq’ed meats. Fresh cut skin on fries, beans, and beer and red cream soda.
Beauty in simplicity.

I was thinking the exact same thing.

Does anyone bbq any of your signature NJ food such as your revered Taylor Ham?

You occasionally see BBQ Ham on the menu in Kansas City (at Gates for example), but not around here.

NJ is not natural BBQ country. Five years ago there were maybe three places serving BBQ around here, and Big Ed’s was two of them. In NYC you had your choice between Virgil’s, and … Virgil’s.

A lot what you see here gets started because somebody from Jersey moved out of state, got interested in KCBS competition, and then moved back.

So when places in NJ do BBQ they are usually slavishly copying other places, rather than doing their own thing or mixing it up. Its not like you have roadside stands like you do throughout the South. Everything we get is Texas or Kansas City derivative. So for example no North Carolina whole hog chopped BBQ anywhere in the Tristate area.

Taylor Ham is actually like a process chopped ham product with spices added, so it’s more like a lunch meat. Things with that much salt in them don’t tend to BBQ well since they are already cooked and even low and slow just removes moisture and concentrates the salt.

Fresh hams are a different story, but you don’t see many of those here either. I’ve brined and smoked a fresh ham or two, they are delicious. I use a little rosemary and thyme in the cure, it turns out awesome. But all you get in a joint here is pulled shoulder.

I think a natural for BBQ around here would be a spicy fennel based Italian sausage, which you see everywhere in Italian restaurants, but again missing on BBQ joint menus.

There is a place here that does a pastrami spiced short rib, but that’s more quirky than mainstream.

So for example no North Carolina whole hog chopped BBQ anywhere in the Tristate area.

So I say that and then I have to take it back. There is an dude called Tyson Ho who went down to Carolina and looked around, came back and opened a “beer hall” in Brooklyn with chopped whole hog.

It gets mixed reviews, and I have heard zilch about it, and as a KCBS certified judge if it had been good would have heard something. But there you have it.

Since he’s a Ho I may have to do a little r & r with some napkins handy.

Funny. Beef and ham with fries was my standard order for decades at Gates.

Folks do bbq bologna so could be possible!
Chef Jasper back in KC just finished up a set of Italian bbq recipes, including a sauce. I’ll try and search it out.
I have the same experience here in Oregon where it is a somewhat synthetic mix of styles and meats.

Does anyone serve fries or are most places
Set up more as Southern/Soul Food places?

You can find cornbread and greens, but they’re usually not very good.

Not a lot of good pickles unless you go to a deli.

One thing that I find really unusual is that most of the newer BBQ places have an extensive salad menu.

Which shows that they are concieved as restaurants serving a product, rather than an old school joints with a limited meat heavy menu.

It’s just not the same as the South or Midwest.

No sir. No one bbqs porkroll. It is cooked already. It’s simply ground up pork shoulder, sugar, salt and sodium nitrite. Picture bologna but much better lol.

We put it on different sandwiches and burgers

As for whole hogs, we have them here but no traditional BBQ spots do them that I know of locally. Lots of BBQ catering places do whole hog. Also, you will see whole hog at some food truck events and the Puerto Ricans and Cubans cook them whole too
…but that is a different style. The Portuguese like their suckling pigs too. I’m not sure I would define it as BBQ in our American terminology but I’m just talking pig lol

Some PR pig near me…good stuff 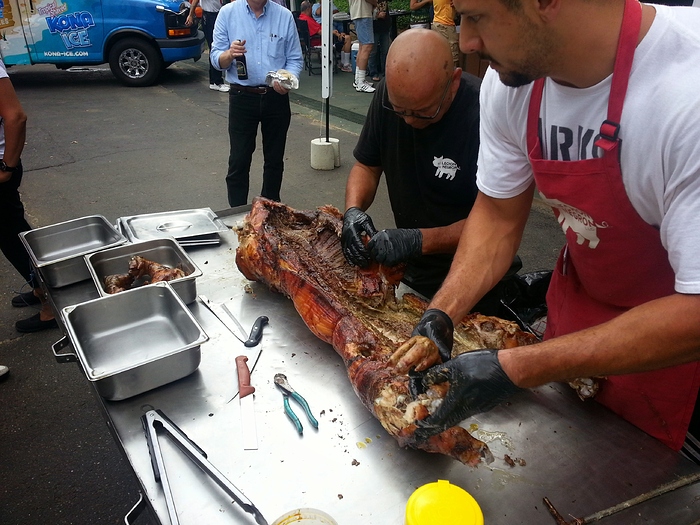