Penang is undoubtedly Malaysia’s (if not South-east Asia) street food capital , with a wide choice of good eats at every corner. One of Penang’s best-known street food dish has to be the “Char Koay Teow” - a fried flat rice noodle dish of Teochew/Chaozhou (潮州) origins.

The Teochew-Chinese are the second largest dialect group in Penang (as in Singapore) after the dominant Hokkiens, but Teochew influences on Penang’s street food is everywhere: from the “char koay teow” to “koay teow th’ng”, “koay chiap”, “char koay kak”, etc.

“Char koay teow” in Penang is pretty different from its counterpart back in its homeland in Southern China, where the rice noodles are fried with meats like pork, and flavoured with fish sauce. Teochew cuisine flavours tend to be lighter than Hokkien, Cantonese, Hakka and other Southern Chinese cuisines. The Teochews also love shellfish and cockles. When the early Teochew settler emigrated en masse to Penang during the 19th-century, they conceptualised the Penang “char koay teow” dish which puts together all the things they missed from home: flat rice noodles, shrimps, cockles, Chinese waxed sausages, chives, duck eggs, beansprouts - and came up with a dish which would become much, much better than its predecessor back in Chaozhou and Shantou where the Teochews came from.

Penang-style “char koay teow” is distinct from those found anywhere else where the Teochew immigrants settled: Bangkok, Singapore, Manila, Kuala Lumpur, Phnom Penh, Ho Chi Minh City. It tends to be lighter, with an emphasis on using the freshest ingredients.

My fave “Char Koay Teow” spots in Penang are:

[1] Ah Leng Char Koay Teow (evenings only)
Lorong Zoo 6,
11500 Air Itam,
Penang
Often voted top in the island for its rendition of Penang CKT. The version here is “wetter”, with water added in towards the end of the frying process. Large juicy prawns, cockles and egg - it’s fragrant and well-seasoned. [2] Sin Wah Char Koay Teow (evenings only)
Pulau Tikus Market
Jalan Pasar
Pulau Tikus, Penang
Some folks endured up to a 2-hour wait for the CKT here. The stall’s been around since post-WW II, and very popular among Singaporeans visiting Penang. Smaller prawns compared to Ah Leng, and even smaller cockles, but it produces a drier rendition with the all-important “wok hei” (which Ah Leng seems to be missing). [4] Siam Road Char Koay Teow
Corner of Siam Road and Anson Road
(Seating in Hock Ban Hin Café).
Georgetown, 10400 Penang
The old man who runs the Siam Road stall is of Teochew descent, though both he & his son (who took food orders from the customers) spoke Hokkien, Penang’s lingua franca. Siam Road’s version differed markedly from others in that the flat rice noodles used had a thinner texture. Priced at RM4 (US1.20) a plate, it’s also very much cheaper than its other famous rivals, though Lorong Selamat’s version had extra-large, plump shrimps, whilst the MacAlister Road Sisters also topped their dish with fresh steamed crab meat. Be prepared for a 40-minute wait here as there’s a crowd all day long (the stall’s closed in Sunday I first had Char Koay Teow at Sedap in London. It was very good but the version I had in Penang was wonderful. I loved the cockles and it had a smokiness to it. I could really eat some now but I’m in Mcleodganj in India at the mo which has a large Tibetan population, still the momos are good. Will just have to wait.

Penang-style "char koay teow’ is somehow very difficult to emulate outside Penang - I’d been in Kuala Lumpur for 5 years already - it’s only 350km from Penang - but genuine-tasting Penang “char koay teow” is almost impossible to find: only two places in KL did it well - a stall in Hutong foodcourt at Lot 10 in downtown KL, and Penang One, a popular eatery in Bandar Puteri Puchong on the outskirts of KL. The rest all ended up with a “KL-fied” version of the dish which is closer to the version back in China.

Ditto Singapore where I spent most of my life - Singapore-style “char koay teow” has very strong Hokkien influences and the fat rice noodles (“koay teow”) will be mixed with yellow Hokkien noodles and fried together. Dark, sweet soysauce and a blend of salty dark soysauce and light soysauce will be used to give the finished dish a darker hue and slightly sweet-savoury flavour.

Mary Yeoh and her husband, Yeoh Teng Chye, who own/run Sedap are from Penang, so they “should” know the authentic version. It’s hard to replicate in their kitchen, though - genuine Penang “char koay teow” is seared over very high charcoal flames, uses a lot of lard, and is usually plated on banana leaves.

My visits to Sedap yielded some of the best Malaysian/Singaporean food I’d had in London, but nothing tasted 100% authentic - inadvertently, the tastes and textures have been tweaked to suit the London palate.

UPDATE: Sisters Char Koay Teow is no more. The son of younger sister, Lam Mew Heng, has decided to hang up his wok for good. Lam Mew Heng herself is 80 years old this year, fully retired & stays at home in Mount Erskine (an upscale suburb known to Penangites as “Pek Hoon Sua” or “Opium Hill”).

The elder of the famous two sisters, Lam Geok Kee, has passed away about a decade back, and her own son has refused to take on the trade made famous by his legendary mother.

Siam Road Char KoayTeow is now located at a new address along Siam Road, and with longer operating hours: 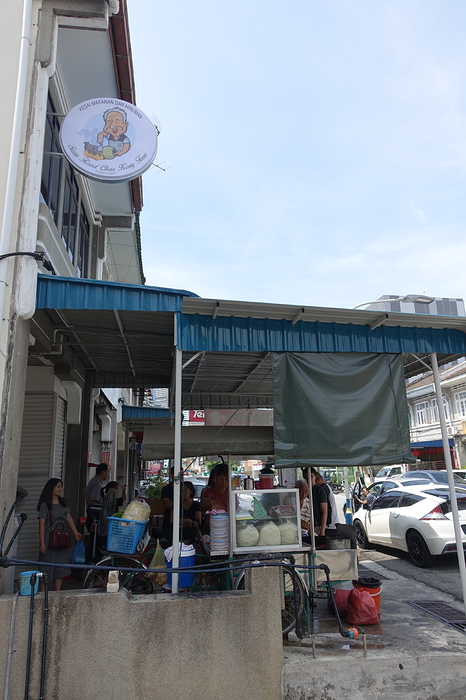