Roti canai is the uniquely Malaysian term for the ubiquitous Indian flatbread known as paratha, parotta, parantha or any other regional variations on the same. In Singapore, we call it roti prata, and it’s one of my favourite breakfast items of all time. 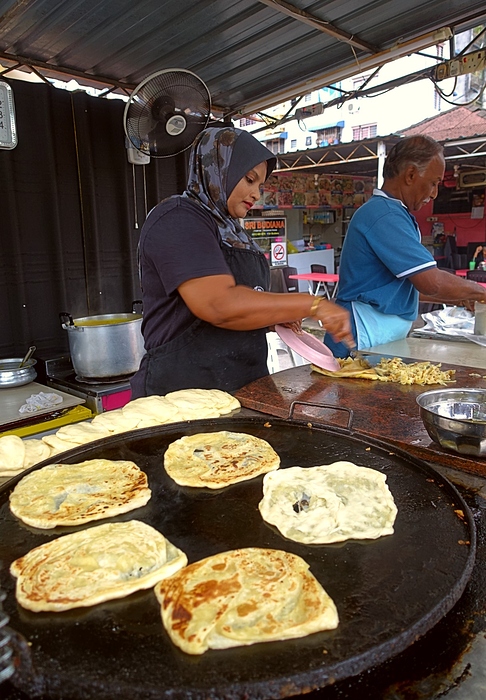 Singaporean roti prata and Malaysian roti canai are virtually the same, coming from the same origins and roots: introduced to British-Malaya in the last century by Jaffna-Tamils (brought in by the colonial British government to build the railroads, work the rubber plantations and man the government offices as civil servants) and their close cousins, in culinary terms: the Malayalees from Kerala, South India. Consequently, roti canai or roti prata as Malaysians/Singaporeans know it is closer, texture-wise, to the light, flaky Keralan parotta than the chewier, denser ones I found in Chennai, Tamil Nadu, despite the fact that the Tamils make up the majority of the Indian population in Malaysia (8% of the total population) and Singapore (9% of the population) as compared to other Indian sub-groups.

In Northern India, where oven-baked naan breads hold sway, the griddle-fried, greasy paratha holds its own in Delhi’s Gali Paranthe Wali, near Old Delhi’s Chandni Chowk bazaar. Here, one finds some of the oldest paranthe vendors in Delhi: Pandit Gaya Prasad Paranthewala (Est. 1872), Kanhaiyalal Durgaprasad Dixit (Est. 1875), Dayanand Shivcharan (Est. 1882) and Baburam Devidayal Paranthewale (Est. 1886) vying to be top dog. The last 3 still remained till today, run by the 6th-generation of the clan which started it - yes, the three spots are somewhat related, run by distant cousins of the same family.

I didn’t quite like Delhi’s paranthe - I found them stodgier than their lighter, tastier Singapore/Malaysia counterparts. But, I do like Trinidadian buss up shot, the Caribbean’s version of the paratha, which is also dense, but very tasty. In London, I love Roti Joupa, although my Trinidadian friends in London said its standard has been pretty erratic the past few years.

ROTI CANAI IN PENANG
Usually, when one eats at popular roti canai spots in Penang like the one on Transfer Road, you often wondered where all the local Penangites are, since virtually all the customers seemed to come from out of state.

Well, local Penangites know where to get the best roti canais in their local neighbourhoods, much better than anything one finds on Transfer Road or others of its ilk. And one such place is this hidden gem - Roti Canai Batu Lanchang, run by 69-year-old Abdul Rahman, who hailed from Parit Buntar (in the neighbouring state of Perak), but has been plying his trade in Penang since 1995. 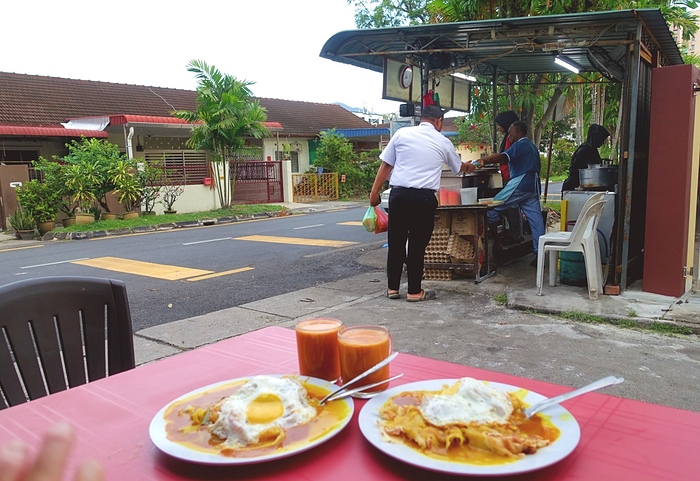 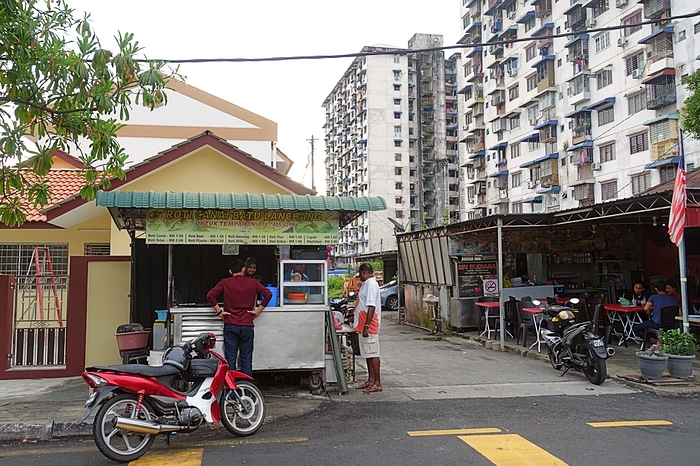 His freshly-kneaded and fried on-the-spot roti canai was large and substantial, with a slight bite to it. He served it with two curry sauces: a robust dhal curry flavoured with chicken stock. and a redder-hued fish curry - both of which were bursting with flavours, “and no msg”", as Abdul Rahman proudly declared. 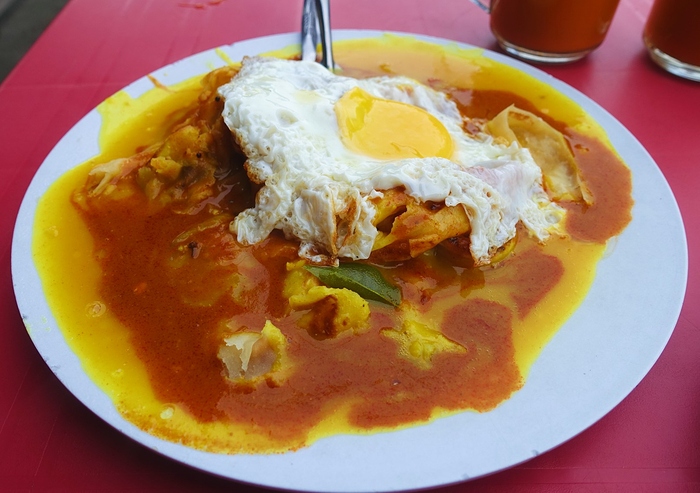 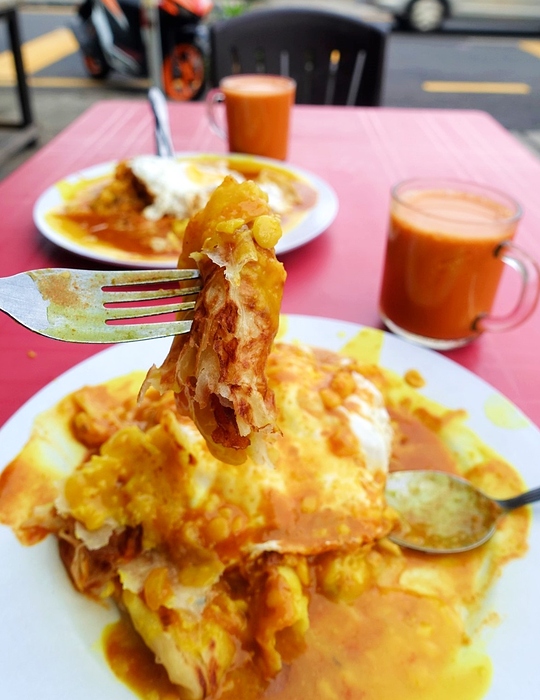 Rolling out and flipping the wet dough to stretch out is Abdul Rahman’s daughter, Berkat Nisa. It’s pretty unusual to see a woman handling roti canai as, somehow, it was seen to be a man’s vocation. But this roti canai-woman is better at making these flatbreads than 90% of the roti canai-men I’d seen. 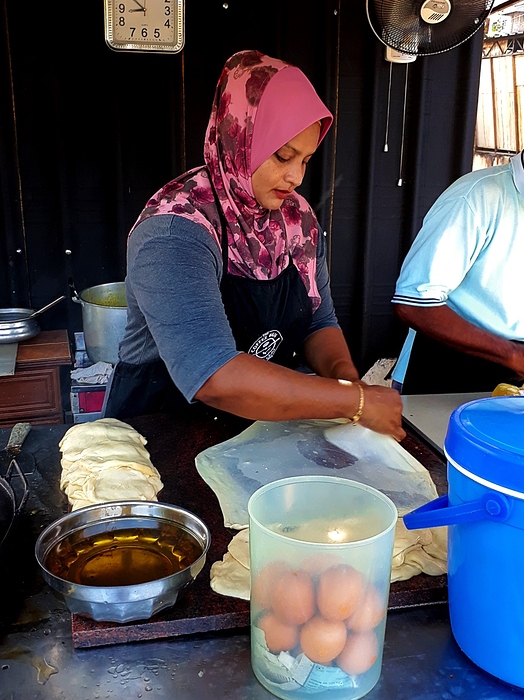 His roti canai stall is a popular neighbourhood breakfast spot along Lintang Batu Lanchang and operates from 7am till 10am daily. 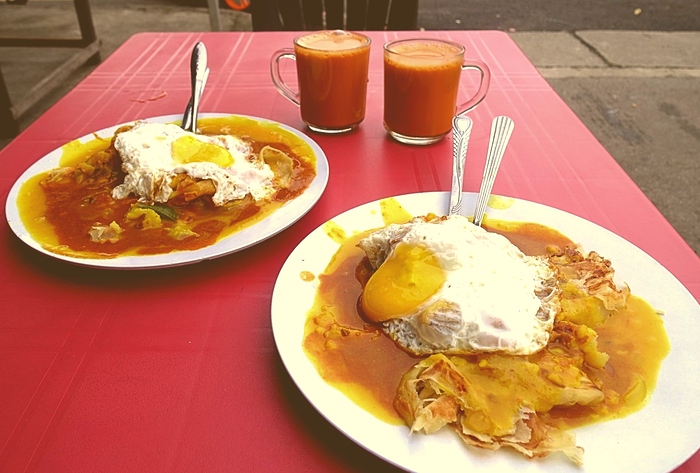 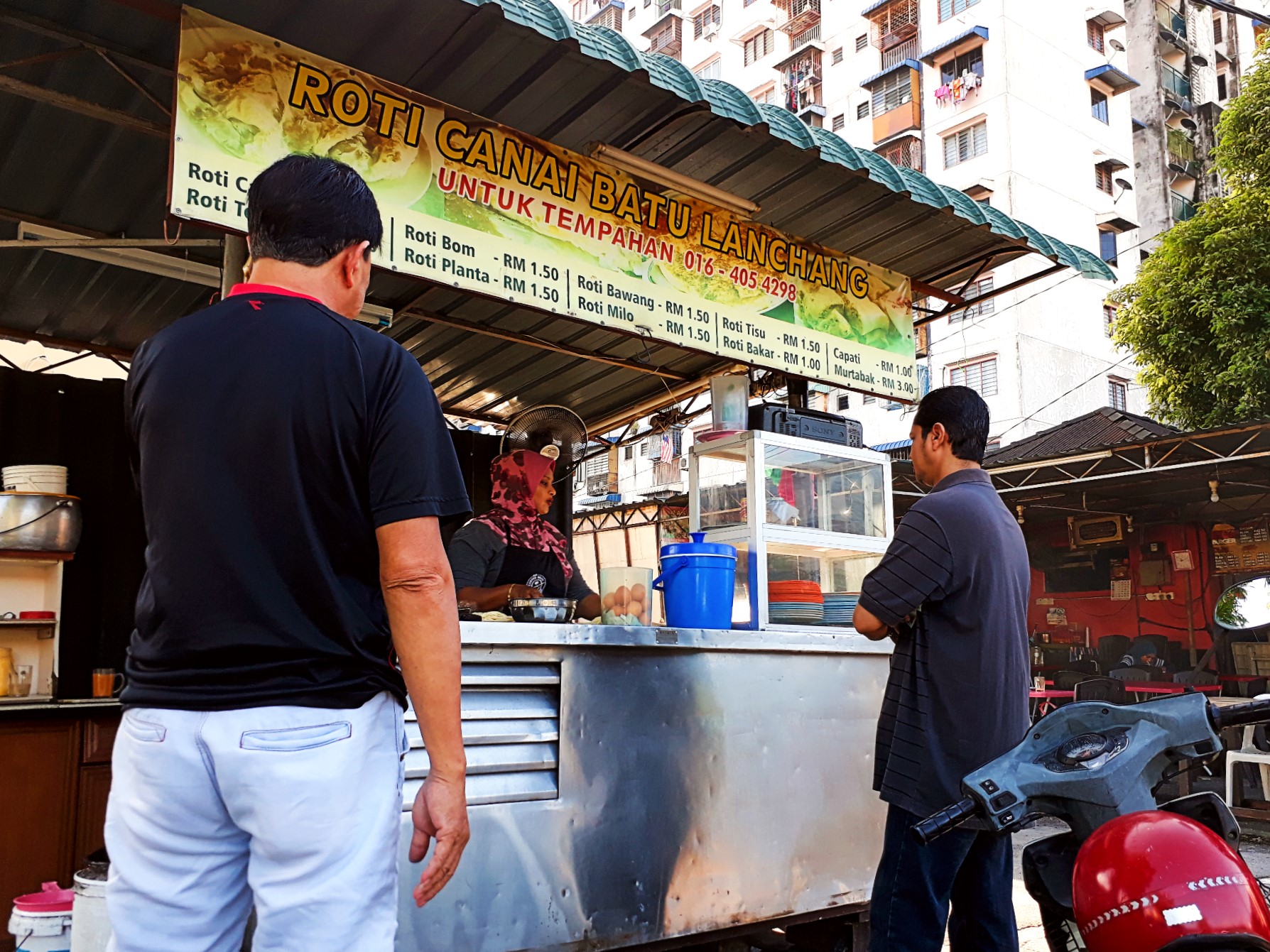 I have an affection for roti canai and it’s cousins.

My first experiences were the “rooti” that’s a staple of the Cape Malay community in Cape Town. We did a food tour round their main area which included a visit to a woman’s home where she showed us how its made. I helped with samoosa making before we all had lunch. We also had it in a well known Cape Malay restaurant - it was the best thing we ate all evening . And better than the homemade one.

I’ve had it a couple of times locally at Malaysian restaurant. One nice roti, one not so good (very oily).

My first experiences were the “rooti” that’s a staple of the Cape Malay community in Cape Town.

I’d like to visit the Cape Malay communities in South Africa one of these days. Physically, they don’t look anything like the Malays, but more Indian/South Asian. Apparently, the earliest Cape Malays were mainly Javanese from the Dutch East Indies, or modern-day Indonesia, but the term slowly began to encompass any practicing Muslim, irregardless of ethnicity. 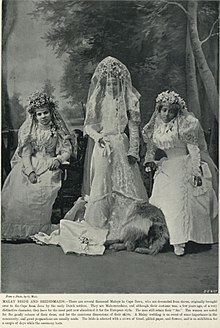 Cape Malays (Afrikaans: Kaapse Maleiers, کاپز ملیس in Arabies script) also known as Cape Muslims or Malays, are a Muslim community or ethnic group in South Africa. They are the descendants of enslaved and free Muslims from different parts of the world who lived at the Cape during Dutch and British rule. Although the initial members of the community were from the Dutch colonies of South East Asia, by the 1800s, the term Malay encompassed all practicing Muslims at the Cape, regardless of origin...

My interest is in their food, an inter-mix of Indian, Javanese and Dutch cooking.