The Muslim month of Ramadhan, where the faithful fast from sunrise to sunset, started last Saturday, 27 May, and will go on for a month. In Malaysia, food bazaars spring up everywhere, usually toward the late-afternoon, and their customers will flock to these pop-up food stalls by 5pm thereabouts to buy their food for the breaking of fast.

In Penang, one of the good Ramadhan food bazaar is at the Astaka Taman Tun Sardon in the Malay-Muslim enclave of Kampung Kastam and its environs in Gelugor. The array of food stuff on offer was amazing. Tastewise, the food I sampled here blew away those I bought from Kuala Lumpur’s pasar Ramadhan in Bangsar, Chow Kit and Masjid Jamek. 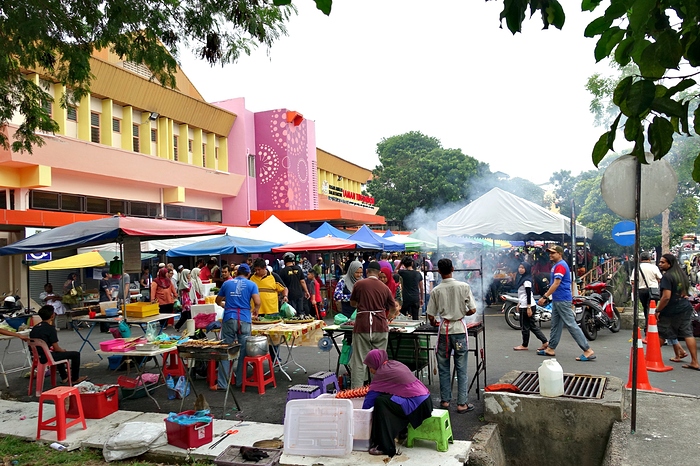 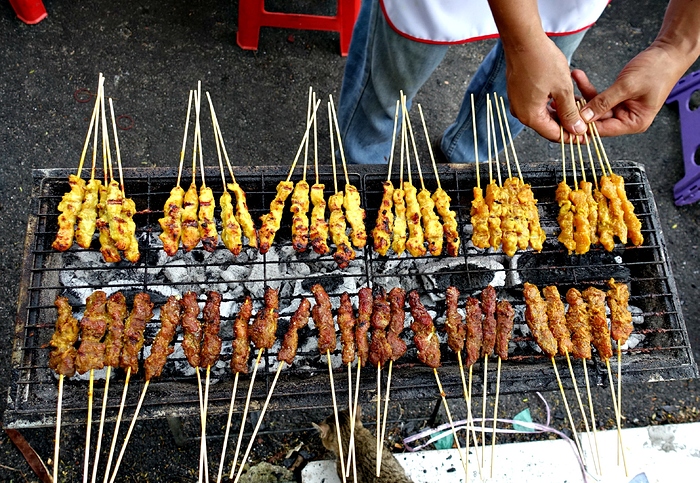 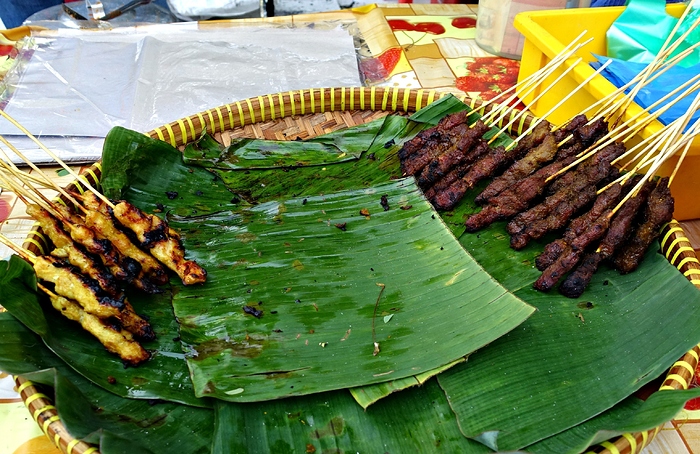 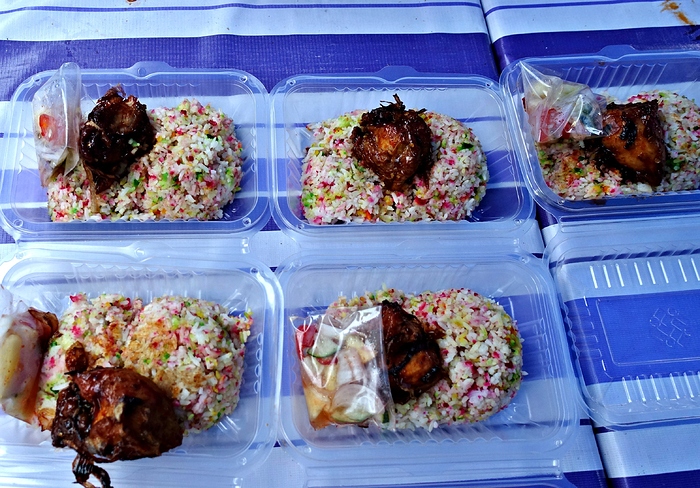 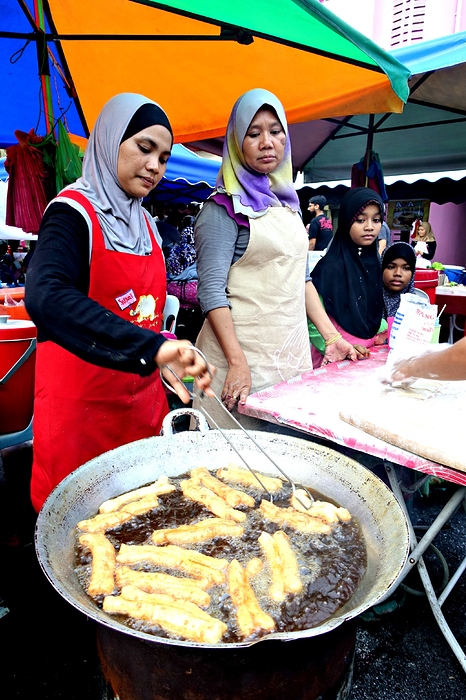 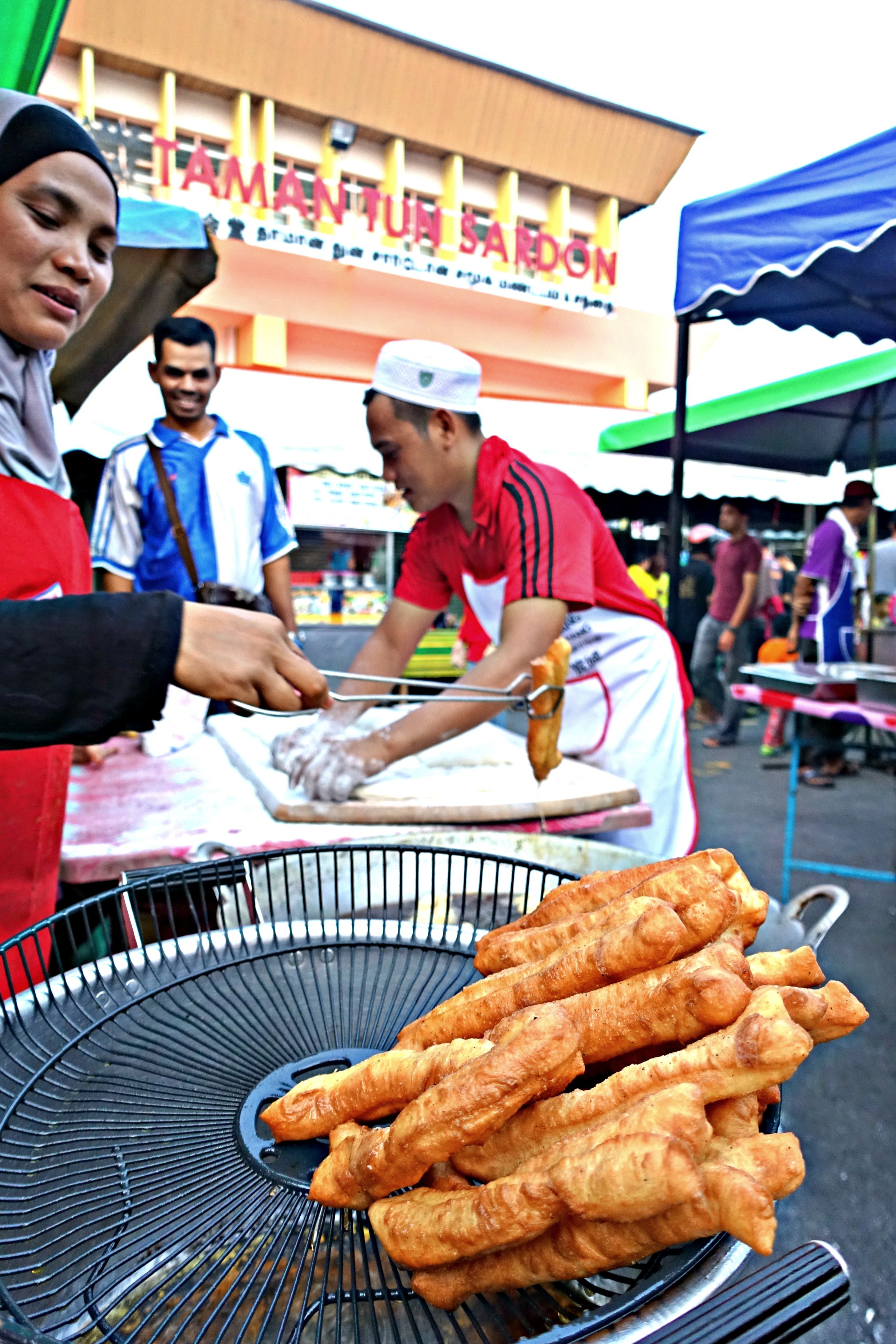 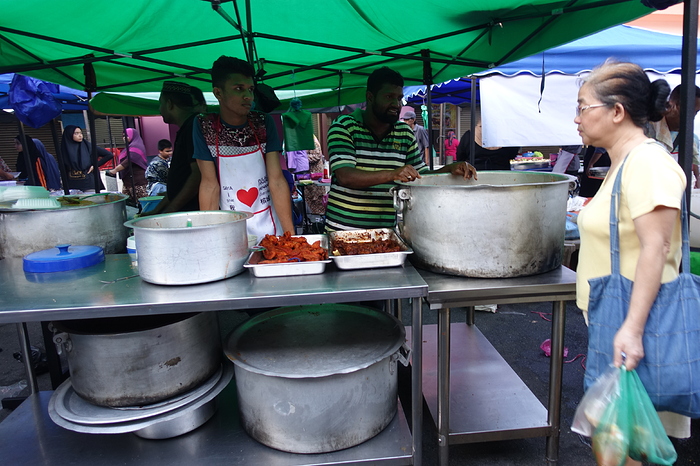 The breaking of fast in that particular area, Bukit Gelugor, is around 7.20pm. Usually, it will be announced from the local mosque. Masjid At-Taqwa here is located 1 minute away from the food bazaar. 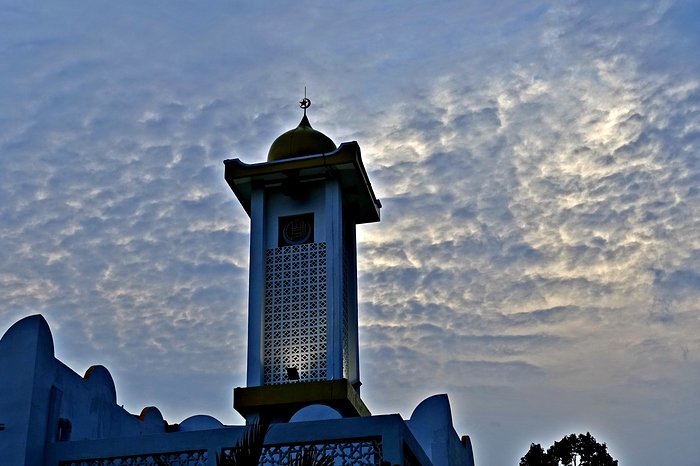 Interesting that the two murtabaks look quite different. The first looks much more pancakey, whereas the second looks more like what I’ve eaten at Hameediyah.

I’m thinking that, at the first murtabak stall, he’s frying the meat-egg-onion filling as large, flat patties first, and will subsequently use a thin, pancake-y dough to wrap those filling-patties. I did not wait to see if this was the case, but it’s very likely.

In fact, you can see this about to happen at the second murtabak stall I was at - the roti man was flipping the dough to spread it thin, whilst you can see a just-fried patty sitting there waiting to be wrapped up, before being griddle-fried again till crisp, golden-brown. 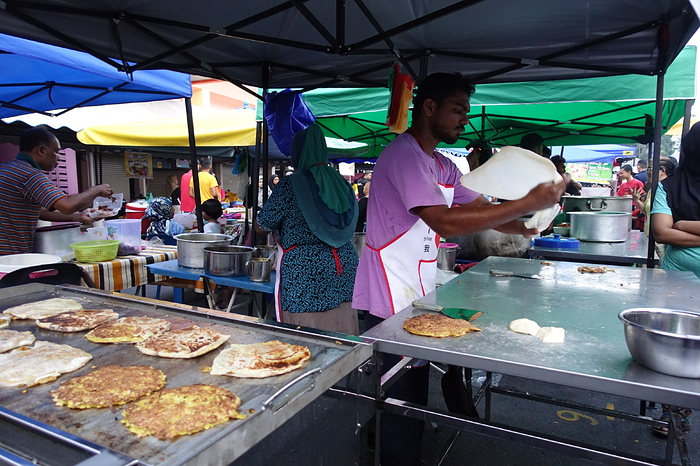 Thank you for sharing your experiences. It’s great to see how different cultures celebrate Ramadan.

Yes, a very interesting time of the year. Malaysia has a 60% Muslim population, and 40% Buddhists (which I am), Hindus, Christians & others. Most festivals are celebrated with public holidays: the Muslim Eid, the Buddhist Vesakha, the Hindu Diwali, Christmas, etc.

Penang Island is, in a way, different from the other 12 Malaysian states as it’s the only one with a Chinese majority population, who are largely Buddhists, Taoists and Christian. Penang Malay-Muslims still form a sizeable minority, and Ramadhan is also very much an important religious period. However, having a majority non-Muslim populace means finding food during the day is easier in Penang, compared to states like Kelantan and Terengganu, where the populace are 97% and 98% Malay-Muslim respectively, and almost all eating places are closed from sunrise to sunset.

The two sets of murtabak do look different. I’ve also been to Hameediyah and had murtabak elsewhere in Malaysia.

In Indonesia they spell it martabak and the version I had in Yogakarta was a different. Much thinner dough. Much crisper but also a lot greasier and no gravy. 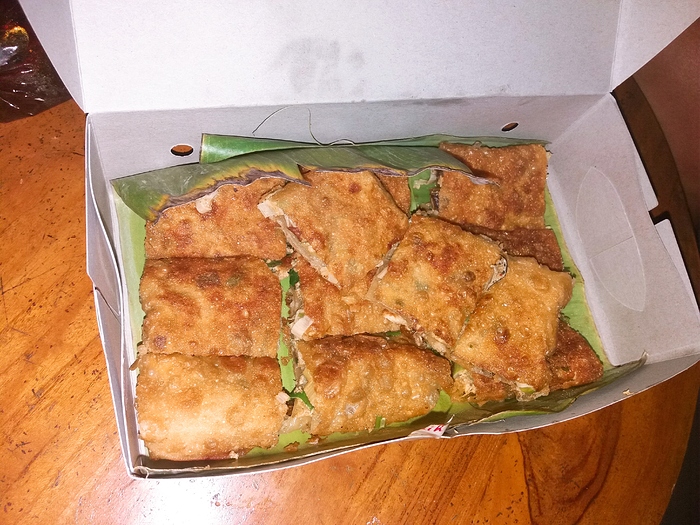 A sweet version is also very popular in central Java . Very much a pancake batter. This chocolate, peanut powder and condensed milk was very rich and indulgent. 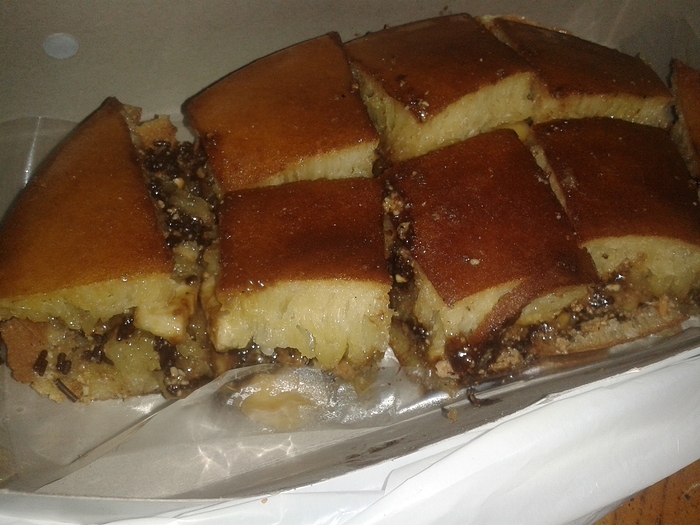 A few days in Kuching i had murtabak with tandoori chicken and cheese. Very delicious and the curry gravy made it. This wold go down a storm in The UK. 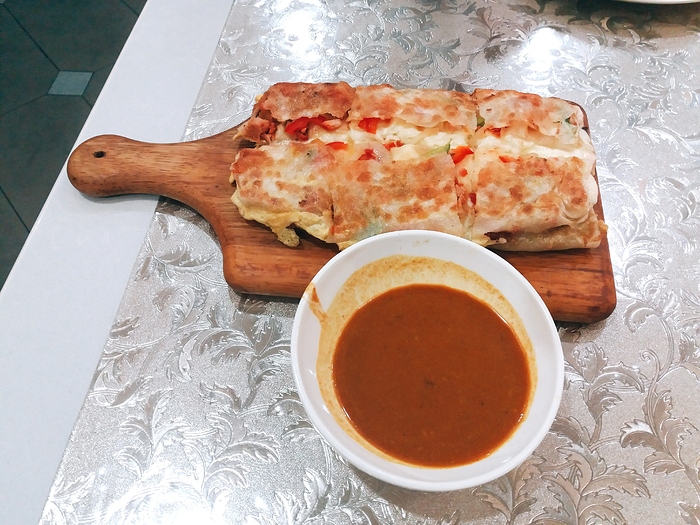 Both food items require different cooking techniques and very different ingredients, so we were amazed that most martabak spots in Jakarta, etc. maintain two sets of preparation stations side-by-side, one making martabak manis and one for martabak asin.

For the record, martabak asin (or murtabak, as we know it in Singapore/Malaysia) is of Arabic origins, and came to South-east Asia by way of seafaring Indian-Muslim traders in the 19th-century, whilst martabak manis is of Chinese origins - having been purportedly invented by the Manchu General Tso Tsung-t’ang (who, in America, has another dish named after him: General’s Tso’s Chicken

Thanks for sharing the photos, very interesting.

On a complete tangent, how did you find the food in Kuching/Sarawak?

I didn’t stay there long enough to get a real feel for it. And only had one bowl of the famous Sarawak laksa in the end - was meant to have more on the last day but the alarm failed and I had a stressful dash to the airport instead.

I really got a taste for the fiddlehead fern / midin that they have over there though, that I managed to have a few times.

Oops, just saw all the separateKuching posts that have been made. Ignore the hijacking of this one!

@Lex. Don’t worry about hijacking I seem to have turned it into a martabak thread.

I really liked the food on Kuching. Up there with Penang and Kota Bharu in terms of places I’ve eaten in Malaysia. I went there from Java where a lot of the food is very samey ( there’s only so much bakso, soto and gado gado you can eat). Even in food courts there’s row upon row of stalls all doing exactly the same thing. If youre willing to spend money you can find good food but on a budget it’s more difficult. I’m now in Sabah and Kota Kunabalu is much more like Indonesia than Kuching is. I think the size of the ethnic Chinese population makes a big difference.

I tried the jungle ferns at a village where I took part in a bamboo raft race and at a restaurant and they were very tasty. I have put up some posts on my time in Kuching if you are interested.

Great time to visit Malaysia and durians are in their peak season too.