Sometimes, I wondered what would have been, if Penang had remained under Thai rule today. In a quirk of history, with the intervention of the British Empire, Penang had ended up being part of present-day Malaysia.

Back in 1826, in an effort to preserve the Kingdom of Siam’s independence, King Rama III and Great Britain signed the 𝘽𝙪𝙧𝙣𝙚𝙮 𝙏𝙧𝙚𝙖𝙩𝙮. The treaty affirmed that Gret Britain and Siam respect each others’ territories. The British agreed that Kedah, Perlis, Terengganu, and Pattani were Siamese provinces, while Penang and Province Wellesley belonged to the British, and also that the Siamese would permit the British to trade in their two provinces of Kelantan and Terengganu.

Then, in 1909, the 𝘼𝙣𝙜𝙡𝙤-𝙎𝙞𝙖𝙢𝙚𝙨𝙚 𝙏𝙧𝙚𝙖𝙩𝙮 were signed between Rama V (King Chulalongkorn) and Great Britain which established the border of present-day Malaysia and Thailand.

In return, Thailand relinquished its claims to sovereignty over their erstwhile provinces: Kedah (Thai: ไทรบุรี, Saiburi), Kelantan (กลันตัน, Kalantan), Perlis (ปะลิส, Palit) and Terengganu (ตรังกานู, Trangkanu), which became British protectorates, and later to become part of the Federation of Malaysia in 1957.

However, Thai/Siamese influences remained strong in Penang up till today, as the Siamese have been present in Penang since its founding by Captain Francis Light back in 1786.

Fast forward to breakfast-time this morning, where I’d gotten some Thai breakfast options from my local market: 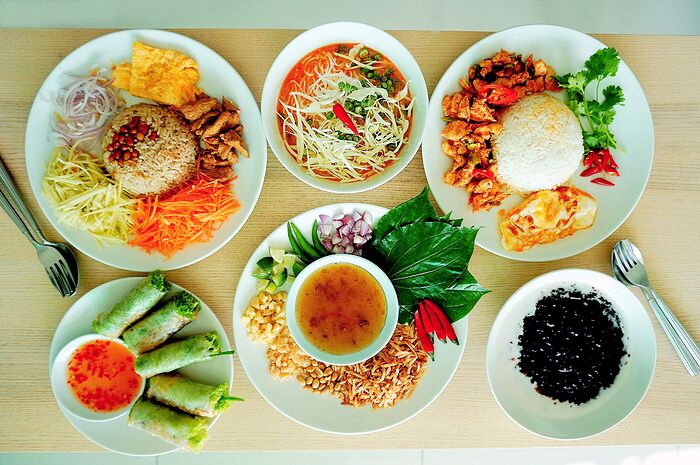 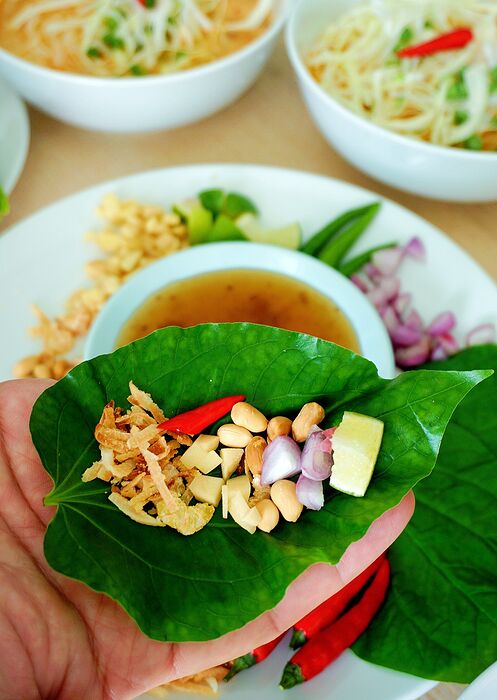 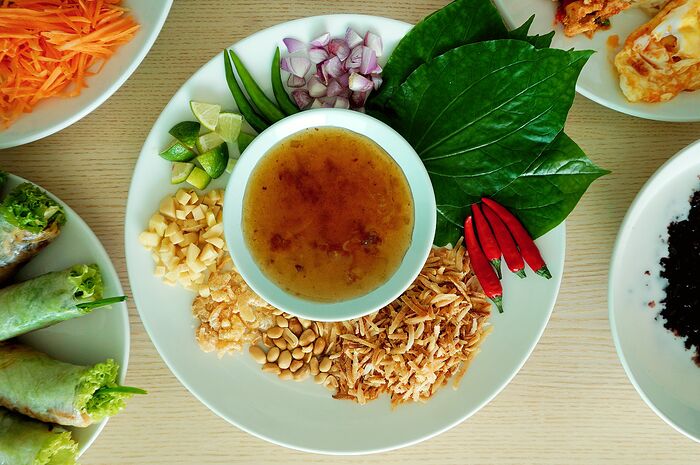 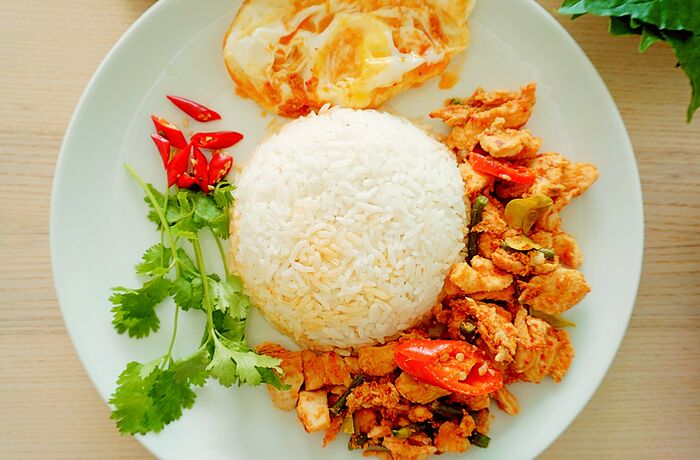 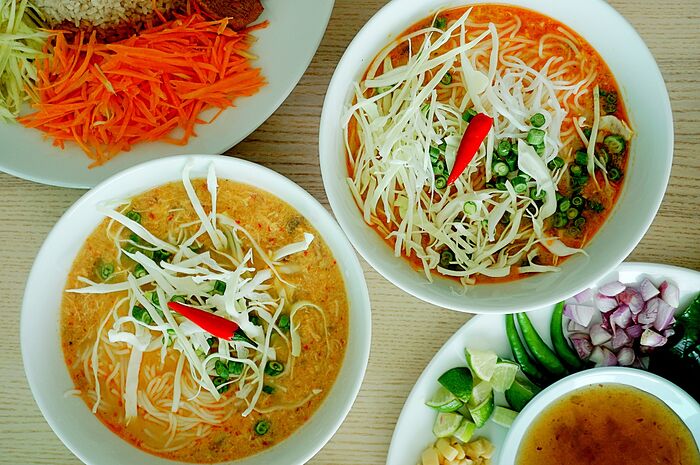 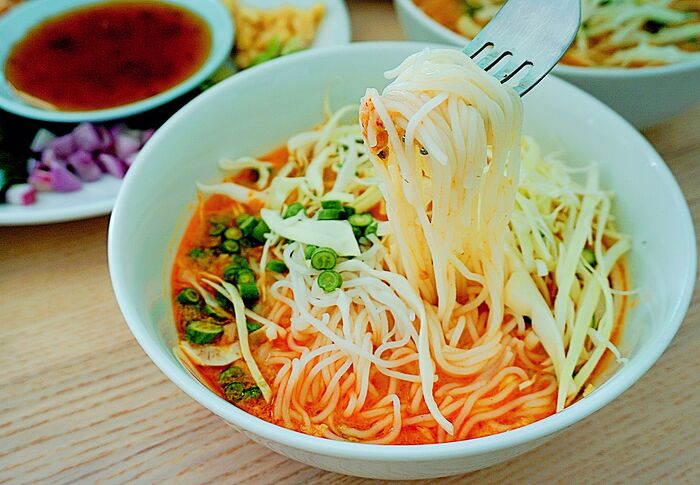 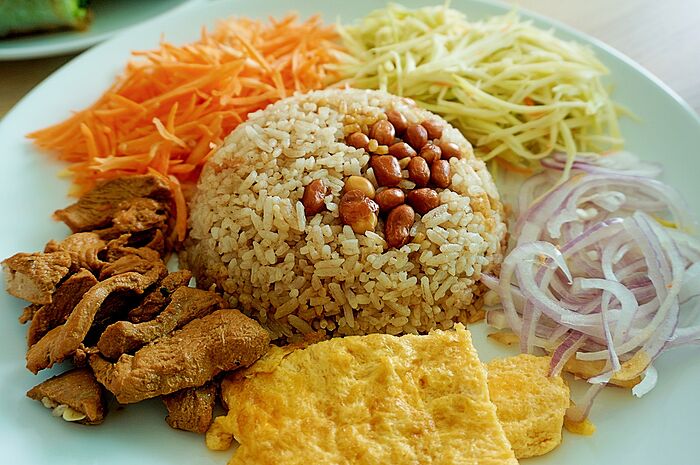 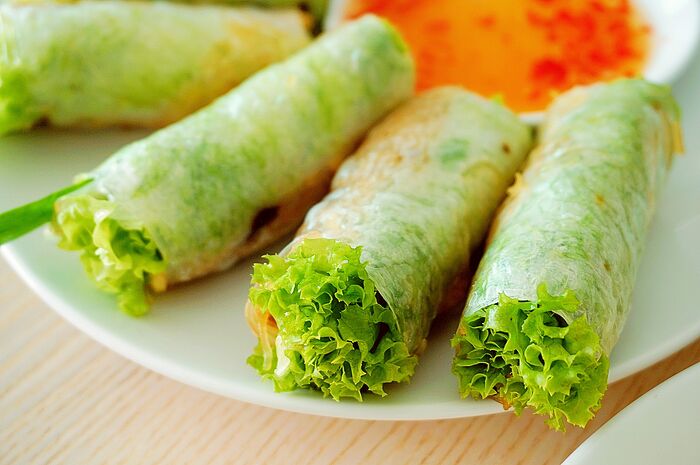 The Thai vendors’ operating days are erratic - they were all here today (a Friday), but all of them weren’t around last Friday. 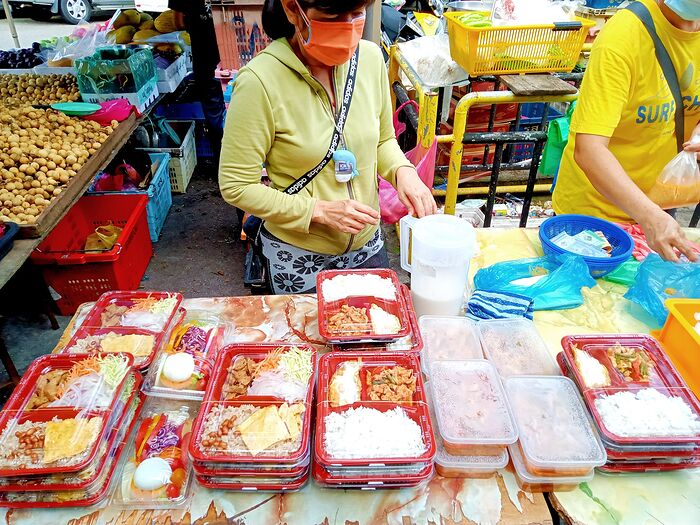 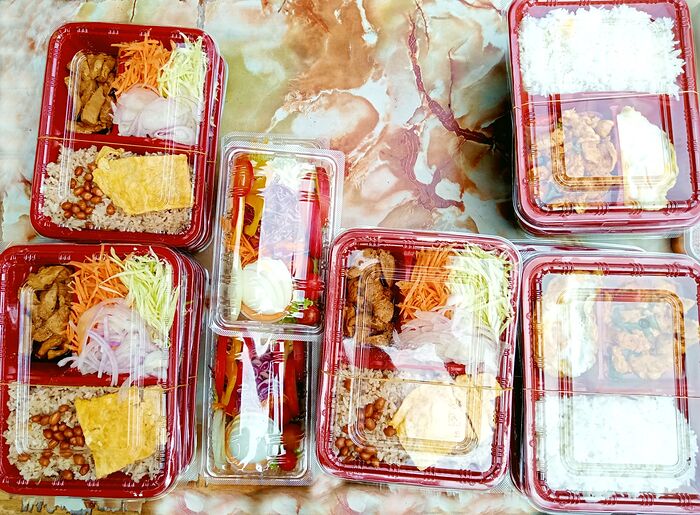 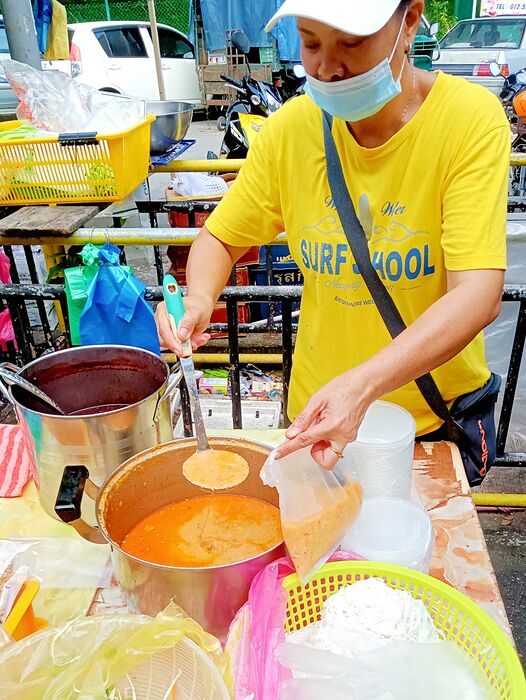 I’m literally salivating at everything. And the historical backdrop, as always, is fascinating.

And the historical backdrop, as always, is fascinating.

Thanks, @digga . I hope you can come visit us here one day.

In order to understand Malaysia’s food culture, it is very necessary to look at it from the historical perspective - for this is a very young country which only achieved its independence (after more than two centuries of colonial rule under Great Britain) in 1957. Malaysia is a loosely cobbled-together federation of disparate centuries-old sultanates, protectorates and colonies whose only common, shared legacy was that all of them were under British rule at the time.

So, each state in Malaysia has its own culinary culture which had existed separately for centuries, before they are all bundled together as one “country” a bit over 6 decades ago. It explained why I can drive 1.5 hours from Penang to Ipoh, the capital of neighboring Perak state, and find nothing in common between the food of the two cities. Penang’s Chinese cuisine is influenced by the Hokkiens (Fujianese) and Teochews (Chaozhou) whereas Ipoh’s is dominated by the Cantonese and Hakka. You won’t find a single one of Penang’s famous street food in Ipoh, vice versa. Even the Malay food of the Perakians are distinctly different from Penang’s.

Historically, the states of Perlis, Kedah, Kelantan and Terengganu were formerly part of Siam (modern-day Thailand), whereas Penang and Singapore were British crown colonies which were developed by the British East India Company over two centuries.

Malacca was a flourishing old Malay kingdom that was much invaded by different foreign powers - the Portuguese in the 16th-century, the Dutch in the 17th-century and the British in the 19th-century. The other Malay states of Johore and Perak were offshoots from the Malacca sultanate after the sultan lost his kingdom to the Portuguese conquistadors.

Then, there were the Borneo states of Sabah (formerly British North Borneo) and Sarawak, once ruled by the White Rajahs: English adventurer James Brooke, and his descendants, until the British government forcibly took over the state from the Brooke family after World War II.

So, one finds Siamese/Thai-influenced Kedah, Perlis or Kelantanese cuisine, whereas Malacca has fusion dishes influenced by the Portuguese and Dutch. Sabah and Sarawak food are closer to Filipino renditions due to their proximity to the Philippines.

Penang and Singapore have the closest food culture to each other due to their shared history and similar population make-up, but, even then, there are local variations for many of their dishes.

I much preferred the thicker Thai rice noodles (khanom cheen) over the Chinese rice vermicelli. The Thai noodles are also not as toothsome as the Chinese versions used for laksa. 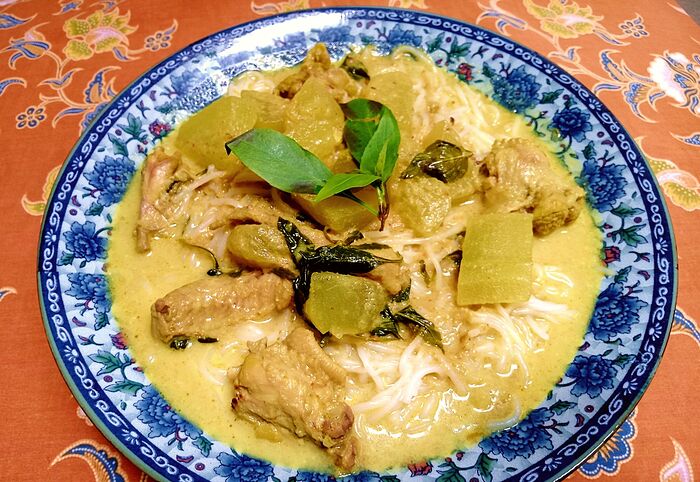 The “keng kaew wan kai” (green curry chicken) had all the requisite flavors from the galangal, lemongrass, green chilis, kafir lime peel and spices such as cumin and coriander. Thai holy basil leaves lent it the signature green curry scent. 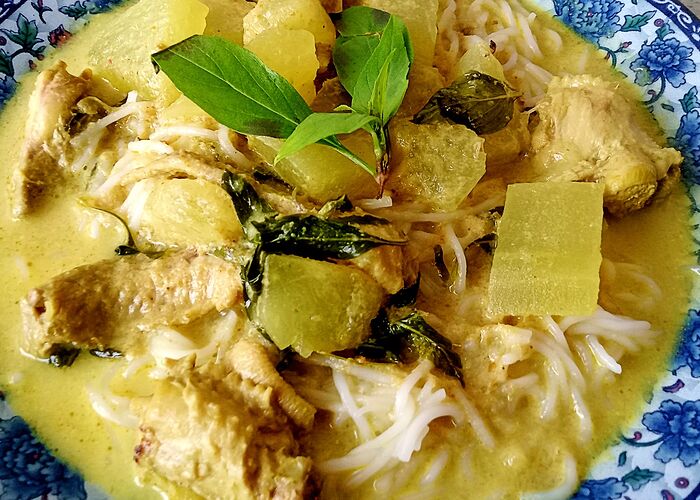 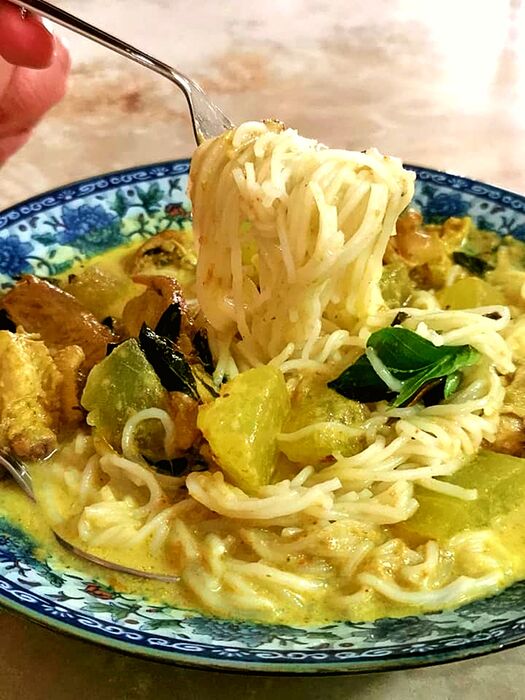