The former Madras Lane Food Court underwent a few changes of ownership in recent years, and its latest incarnation which opened on 28 July 2020 is Sun Wo Loong (Copra) Square Food Court. One of the main attractions here is the wide range of breakfast dim sum - up to 100 varieties - offered each morning from 6am onwards.

Traditionally, in Penang, Kuala Lumpur and Singapore, as in Hong Kong, dim sum is a breakfast food (Singapore’s legendary Chinatown dim sum joint, Nam Tong, used to serve its dim sum from 4am), with the dim sum-making kitchen space then given over to noodle stations and for cooking other types of dishes by lunch-time.

Madras Lane in Penang, so-named as the street was mainly settled by Tamil immigrants from Madras (present-day Chennai) in the early-19th century. During the time of Indian independence in 1947, it was estimated that the Tamils constituted 85% of the Indian population living in Malaya and Singapore.

The local Hokkien-Chinese called Madras Lane alternately as “Eu Kar Lor” (“Oil Mill Road”) or “Chha Lor Thau” (“Timber Landing Place”), a reference to its initial function as a place for off-loading timber at Prangin River/Canal there. One of the major industries on this street were the oil mills. Penang, by the 1880s, was a major centre for exporting copra and coconut oil to the rest of British Malaya and Singapore, as well as to Burma and Siam.

Copra/coconut oil processing mills proliferate on Madras Lane due to the availability of wood from the timber-processing factories there then. There were 4 major oil mills in Penang at the time:

The largest of them all was Sun Wo Loong. But the historic oil mill closed down over 2 decades back. Some of the original structures are still there, but most of the space has been re-purposed as Sun Wo Loong (Copra) Square Food Court, a food & beverage complex instead. The place gets pretty busy on weekends, when dim sum fans flocked there for their yum cha sessions with family and friends. 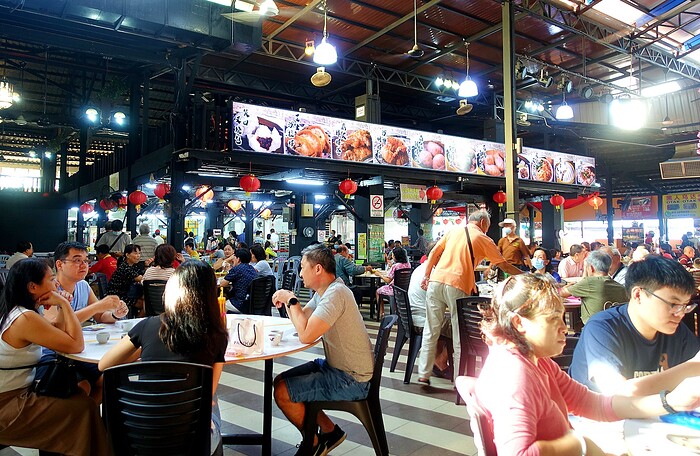 Each table will be given order cards, to be used to record one’s orders when one queues up to order at one of the serving stations where dim sum are freshly steamed.

It’s all self-service: just fetch one of the trays stacked up at the head of the queue, point to the dim sum items which catches one’s eyes (which the server would place onto your tray), and let another staff at the end of the queue tally up your orders on your order card. 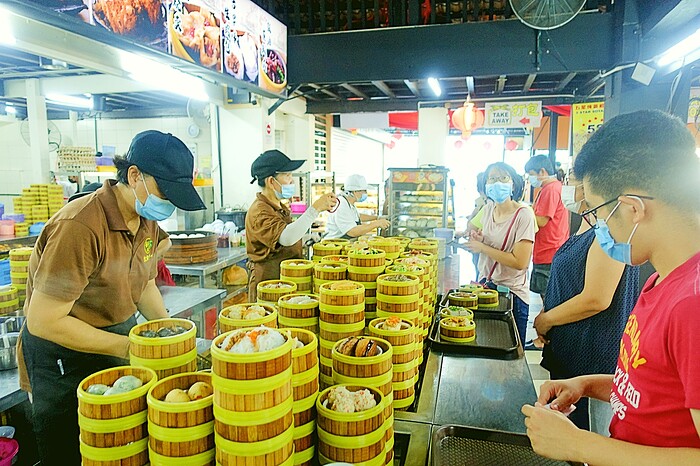 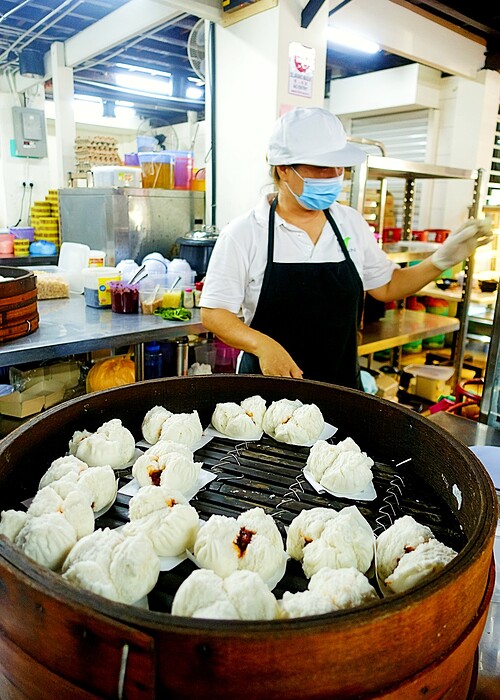 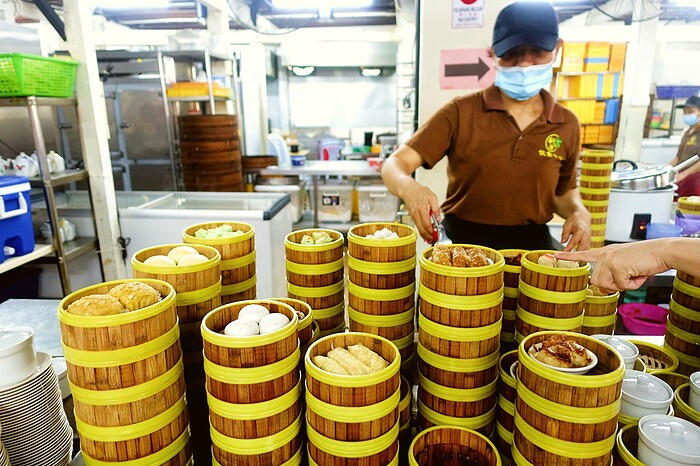 The problem I have with this kind of system is that I always ended up over-ordering! 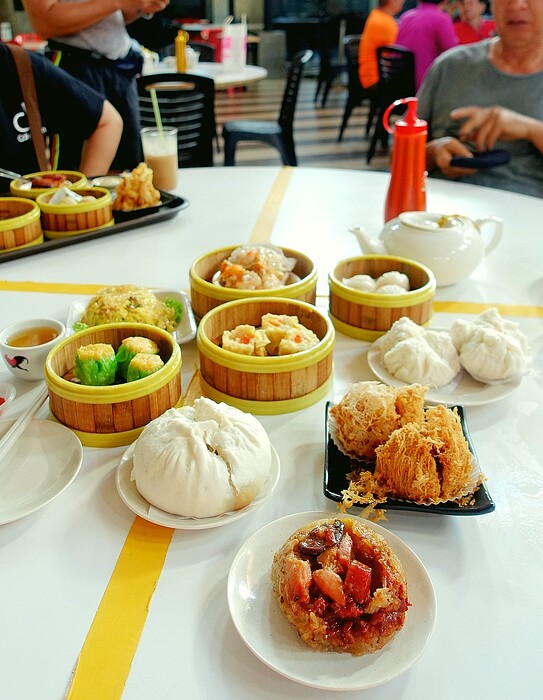 For the prices here, the dim sum we had were not too bad, although some of the items were on the salty side, especially the shrimp-pork dumpling topped with grilled Japanese “unagi”/eel. 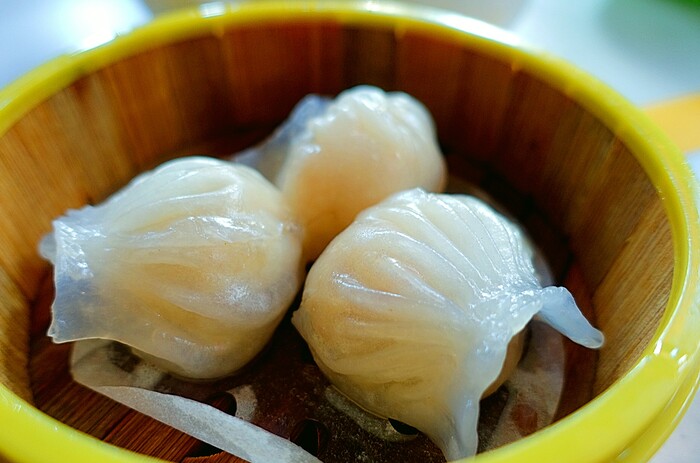 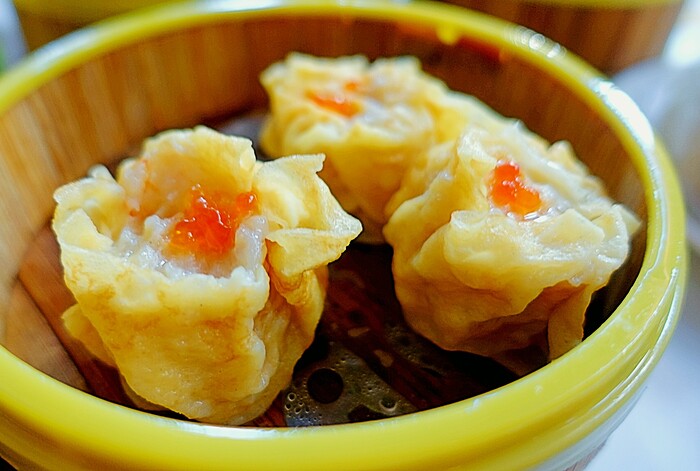 Har mai - we weren’t sure what to make of this: the filling was also a mixture of minced pork with shrimp, but with the addition of a bit of dried/salted shrimp to lend it some piquancy. It also made the dumplings quite salty. 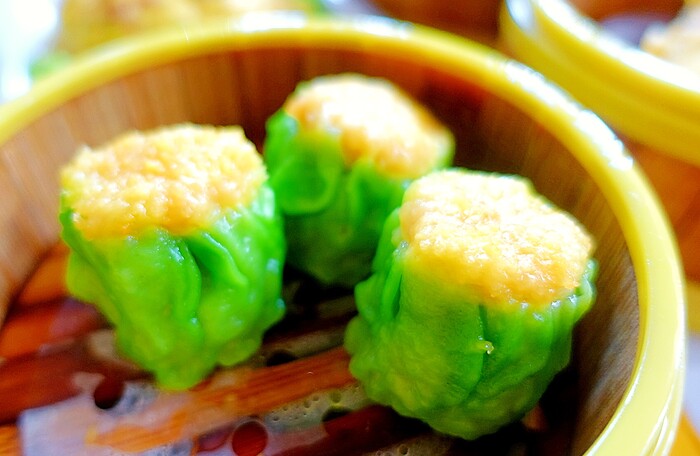 This largish disc-shaped dumplings topped with whole scallops were the best-tasting of the lot. 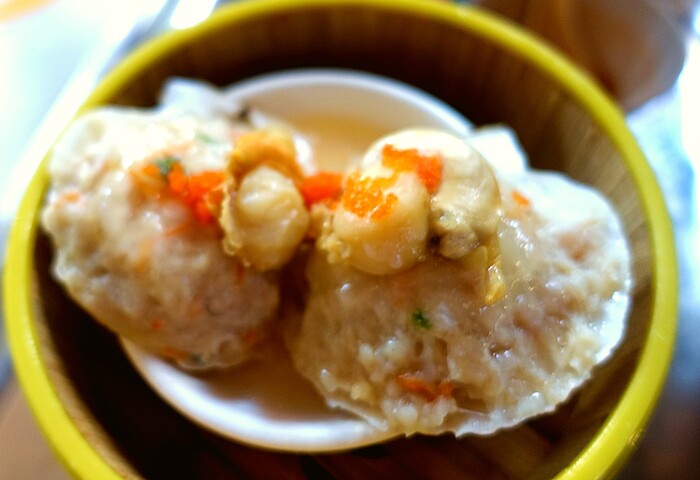 The steamed BBQ pork-filled char-siew bao buns were heavy and rather stodgy, and with the caramelly pork filling overly-sweet. 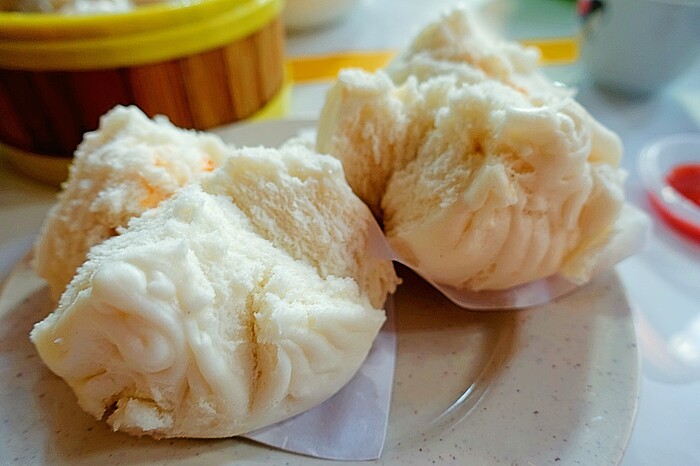 A non-dim sum option we tried was the “sharks-fin” omelette - not real sharks-fin, but one made from gelatin/mung bean flour. The dish, overall, was blander than expected. 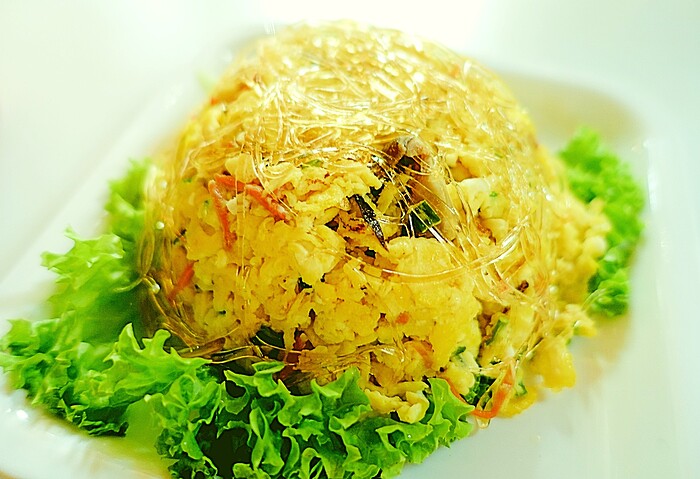 Taste-wise, Sun Wo Loong’s dim sum standards were slightly above average, by Penang standards. But the large choice available puts it far ahead of its other main rivals in town.

Our favourite place in Manchester’s Chinatown does a reasonable range of dim sum. Of course, because they are mainly catering to Anglos, they are offered as starters, rather than their stand alone traditional use at breakfast or lunch.

Our favourite place in Manchester’s Chinatown does a reasonable range of dim sum.

Very nice selection, as per their menu. I’d sure like to try this place if I’m ever in Manchester. My all-time fave dim sum restaurant during my days in San Francisco is called Yank Sing.

London Chinatown’s restaurants all open at around 12 noon, so dim sum is only offered for lunch there.

Back in the 1970s (?), Manchester’s Yang Sing was often mentioned, by serious commentators,as the best Chinese restaurant in Europe. That is a long time ago and it may not even be the best in Manchester now. It was and is owned by the Yeung family. Originally started by Harry and Warren, there was a falling out between the two brothers years back. Warren left the partnership and set up the Little Yang Sing.

Back in the 1970s (?), Manchester’s Yang Sing was often mentioned, by serious commentators, as the best Chinese restaurant in Europe.

It’s amazing that Yang Sing is still around today. Most of London’s most-established Chinese restaurants from that period are all gone: Mayflower, Fung Shing, etc.

Lee Ho Fook, mentioned in Warren Zevon’s 1978 classic, Werewolves of London, was replaced by Leong’s Legend (one of its chefs is now plying his trade in Penang’s Osmanthus Alley).

Yang Sing owners, the Yeungs, share the same family name as me: Yeoh is the Hokkien/Fujianese rendition of Yang (Mandarin) and Yeung (Cantonese). All Yeoh/Yang/Yeung, no matter where they come from, originate from the same clan in Xi’an, Shaanxi, China. Our clan’s progenitor (Yeoh Guy Pin) was born in 1312 AD during the reign of Buyantu Khan (Emperor Renzong), the Eighth Great Khan of the Mongol Empire.

Xi’an is today known for its Terracotta Army site.

My all-time fave dim sum restaurant during my days in San Francisco is called Yank Sing.

Yank Sing is still there and still great, although expensive. I haven’t been there for over a year due to covid. I miss it!

Yank Sing is still there and still great, although expensive.

That’s so cool! I hope to be able to re-visit it again one day.

I haven’t been there for over a year due to covid. I miss it!so.

Keep safe!
I miss being able to travel everywhere. Hoping for a return to some semblance of normalcy in the next year or so.