Perhaps my favorite food item from Borneo is the Sarawak laksa, and my search for a good one in George Town has finally come to a successful end this morning! 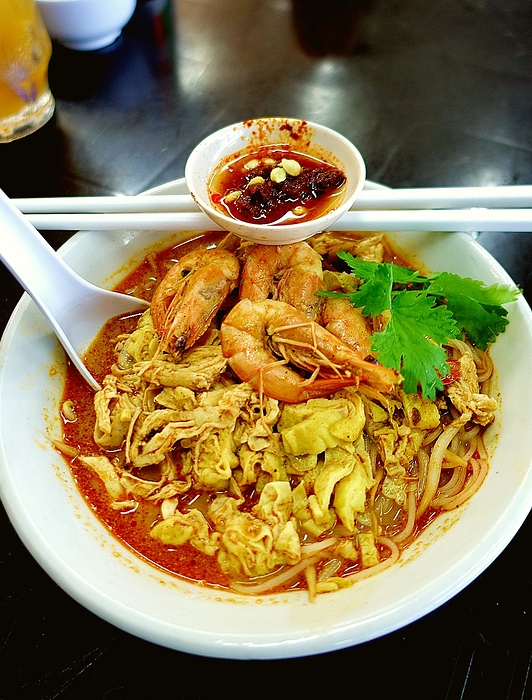 Borneo, the Land of the Headhunters, has always held a certain amount of mystique for me during my childhood years. Largely unexplored even today, its dark interior jungles are made up of primeval tropical rainforests, the largest caves in the world - the biggest one: the Niah caves in Sarawak are so massive, one can park four jumbo jets inside its largest cavern, and thousands of species of flora and fauna, some yet to be discovered, hidden within its deepest recesses.

The indigenous inhabitants of Sarawak are the headhunting Dayaks, fierce tribesmen who hunt with blowpipes and poison darts, and collect the decapitated heads of their fallen enemies, some as recent as the mid-20th century. Today, many have become urbanized, though they still hold onto their beliefs and traditions in many ways. 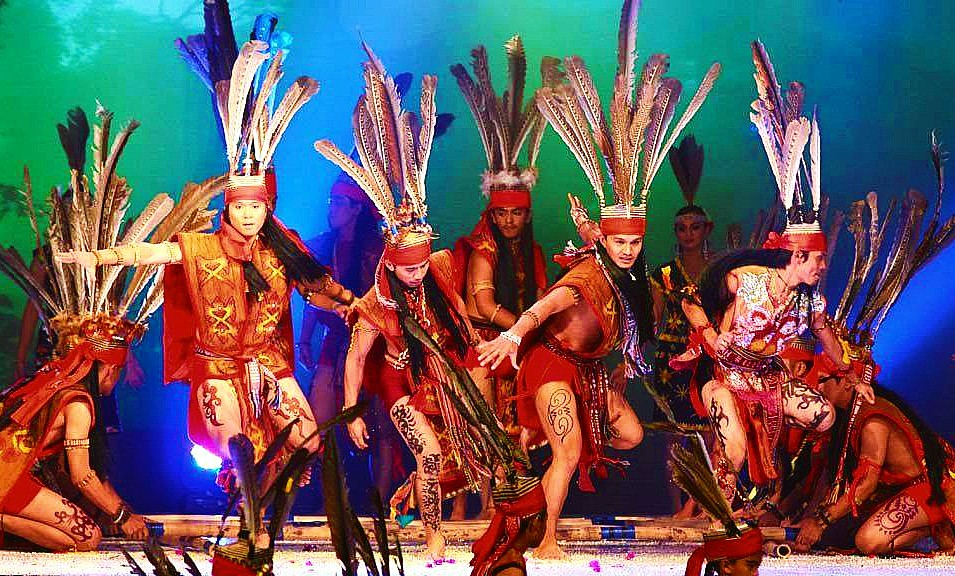 There was also a certain amount of romance attached to the White Rajahs, a dynastic monarchy of the Brooke family, which ruled over Sarawak for over a century (1841 to 1946). The founder was British adventurer, Sir James Brooke, who helped the Sultan of Brunei quell a rebellion. His reward was a kingdom of his own: Sarawak, which, at 124,450 km², was about half the size of the United Kingdom (242,495 km²), but peopled largely by ferocious tribes of headhunters. Sir James Brooke set about building the seat of his kingdom on the site of what is today modern-day Kuching. 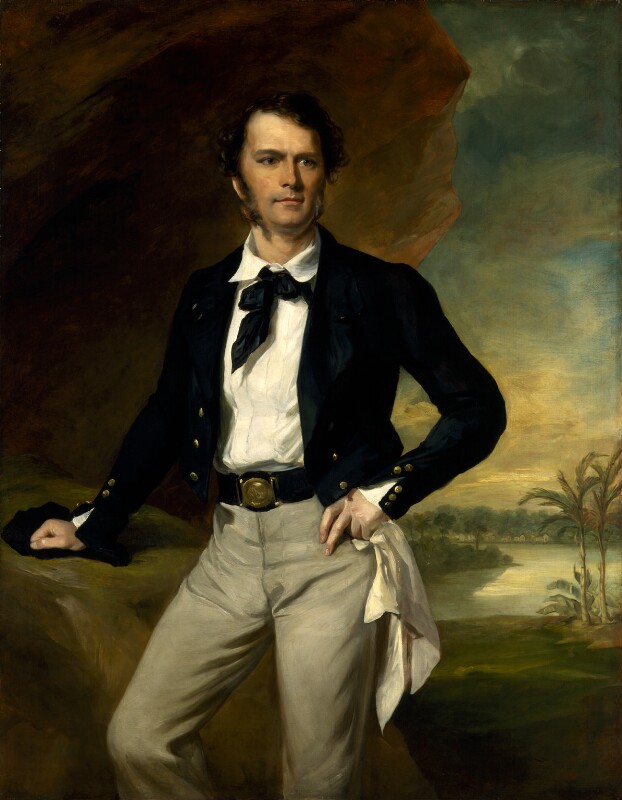 Sarawak was finally ceded to the British Colonial Office in 1946 (right after World War II) by the Third Rajah, Charles Vyner Brooke.

Sarawak, together with Sabah (formerly North Borneo) and Singapore, joined the Federation of Malaysia in 1963, although Singapore seceded 2 years later amidst political tensions. Brunei , the tiniest state on Borneo, opted not to join Malaysia from the onset.

Today, many young Sarawakians and Sabahans have moved to work and settle in Penang, working in its many industrial parks, as well as in the service sector in George Town, which is Malaysia’s second-largest urban centre after Kuala Lumpur. The immigration pattern from Sarawak/Sabah to Penang is unprecedented in the country’s history and, with it, was the appearance of many food stalls and eateries selling Sarawak kolo mee, Sarawak laksa, and Sarawak kampua mee - all Sarawakian noodle staples, but which most West Malaysians, including Penangites, had never encountered before.

So, how does one know if the so-called Sarawak kolo mee which one encounters in Penang is in any way “authentic”? Most Penangites have never visited Kuching, despite it being only a 2-hour flight away across the South China Sea. I myself had only been to Kuching once - back in 1993 when I was a cadet officer with Singapore Airlines. My only memory of that one-week visit was having Sarawak laksa every morning for breakfast ever since discovering it on my first morning in the city - yes, that dish was really that good! 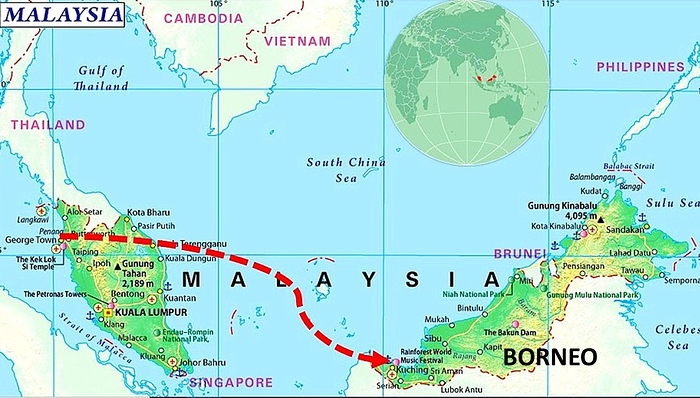 Then, a Bruneian friend of mine who’s a long-time resident in Penang, tipped me off on this place, Sajo Cafe, operated by a woman from Miri, a town near the border between Sarawak and Brunei, whom he attested made the most “authentic” Sarawakian kolo mee he’s had in Penang!

So, I made a trip to Sajo Cafe this morning - it’s actually located in Farlim, a housing estate in the Ayer Itam district on the outskirts of George Town. I knew I’m on the right track as Farlim is known as the unofficial epicentre of the Sarawakian/Sabahan diaspora living in Penang. It’s also a pretty blue-collar, working-class area - dense, bustling, verging almost on the chaotic. I found Sajo Cafe on the ground floor of a block of council flats: 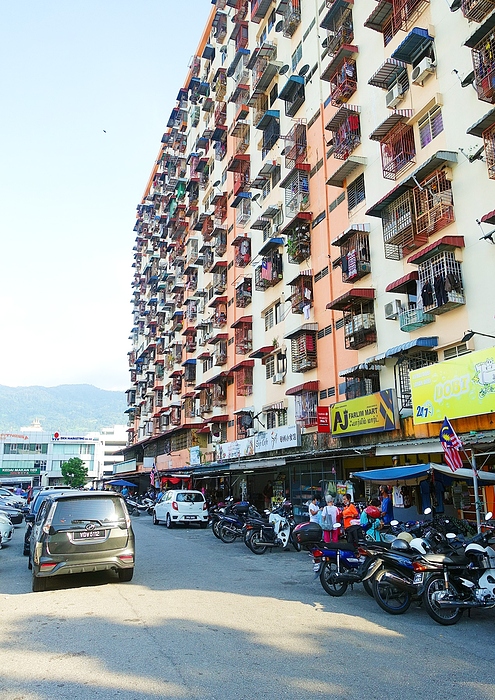 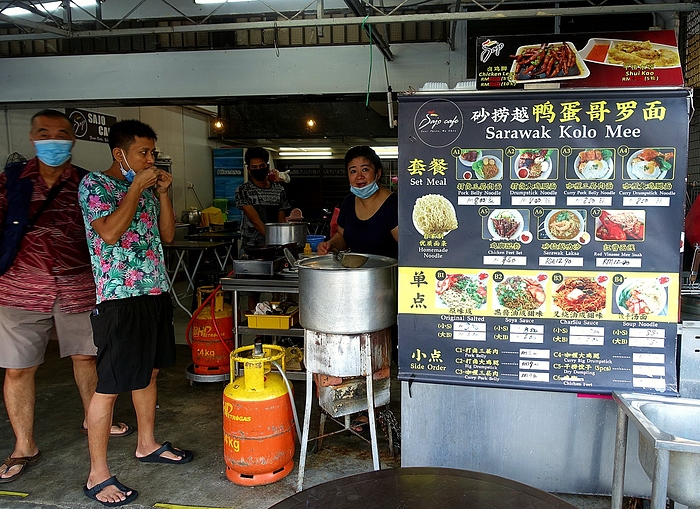 Proprietress-chef, Vivian Sim, was busy preparing the noodles herself: 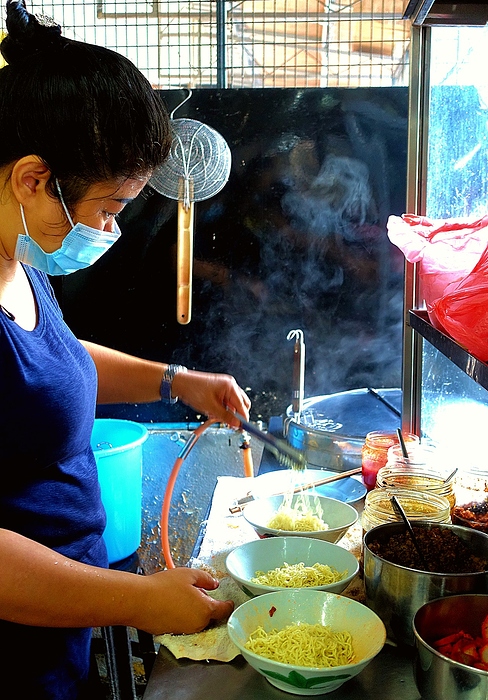 I couldn’t decide which flavor of kolo mee to have, so Vivian suggested a “tasting platter” comprising all 3 flavors: the “original” dressed in only pork lard, an orange-hued one dressed in sweetish-savoury “char-siew” (Cantonese BBQ) sauce, and a dark-brownish one dressed in piquant dark- and light- soy sauces. I taste shallot oil, garlic oil, lard, and a smidgen of salt in the overall dish. The 3 different flavors were pretty distinct. Shallots and scallions were sprinkled on top for additional flavor and texture. 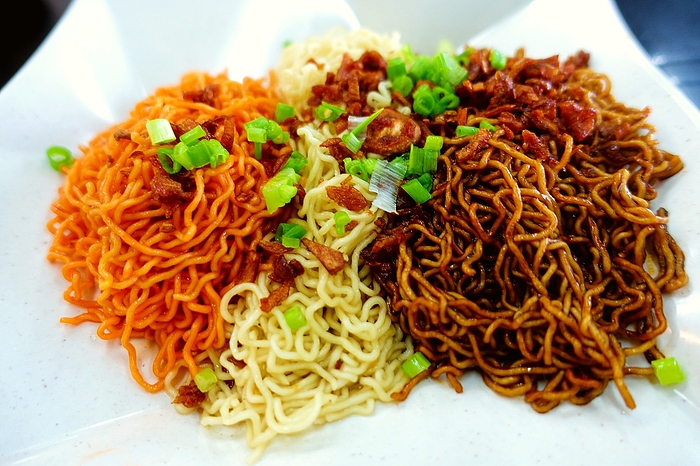 To accompany the noodles, I opted for a Sarawakian chicken curry, instead of the usual minced pork and “char siew”. The chicken curry came with a fried egg, and had deep flavors unlike any other type of curry I’d ever tasted in West Malaysia - as the East Malaysians liked a liquorice-like scent from the addition of a lot of coriander in their spice mix. It was surprisingly spicy - Vivian said Penangites liked their food much spicier than Sarawakians, so she actually “localized” the spice level to satisfy her local clientele. 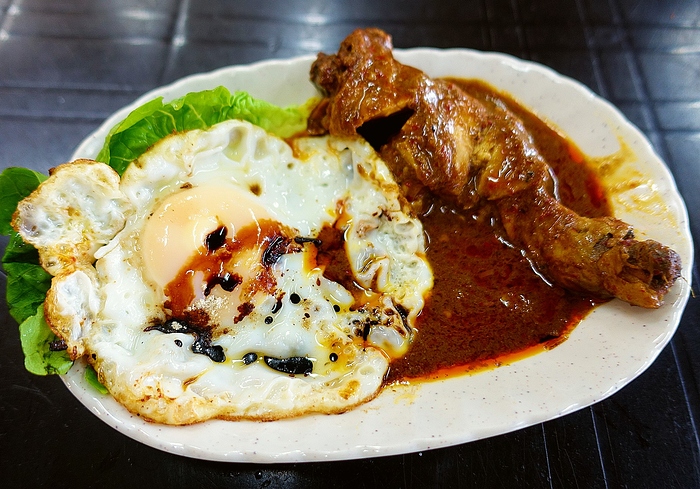 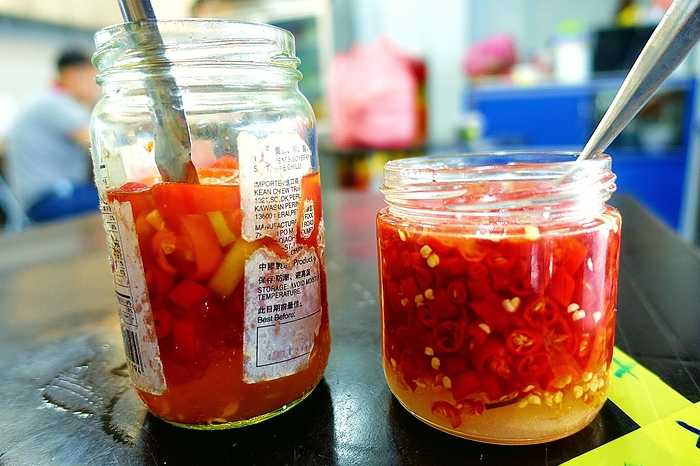 I couldn’t resist ordering the Sarawak laksa, and was rewarded with perhaps the best one I’d encountered in Penang: Vivian actually “imported” her laksa spice mix from Kuching, Sarawak. She said it consisted of 12 ingredients, but she bolstered it with 12 more types of spices and herbs, giving the overall laksa broth a deeper, more complex flavor. 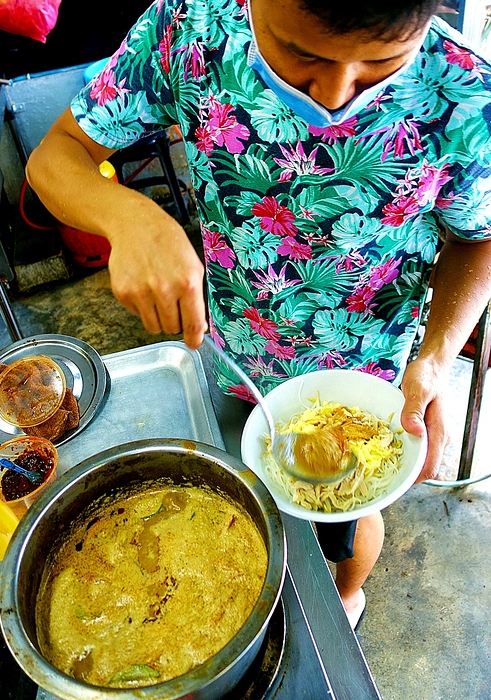 Sarawak laksa consists of fine rice noodles, blanched beansprouts, finely-shredded poached chicken, par-boiled shrimps, and julienned ribbons of egg omelette. The Sarawak laksa gravy is piquant, with a fragrant heady aroma from its liquorice-like scent as its spice mix is heavy with coriander and gets its heat from black pepper, rather than chilis, The gravy is enriched with coconut milk, and the overall concoction is rather addictive. 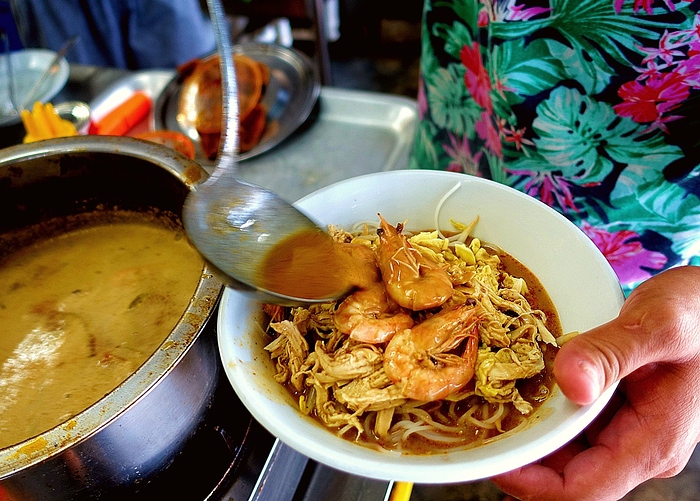 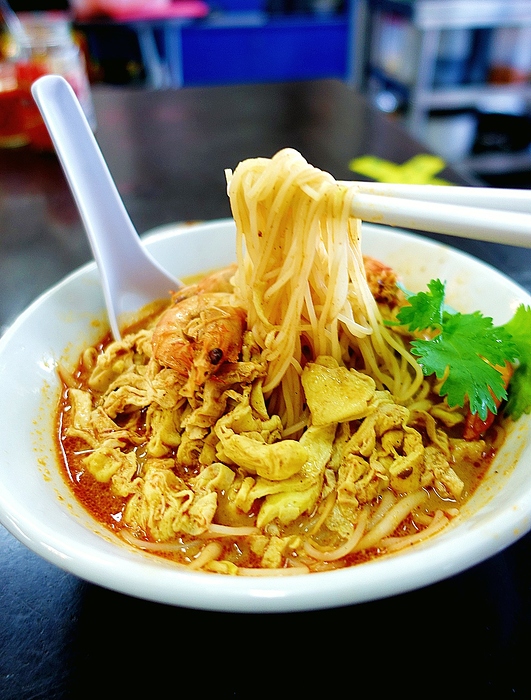 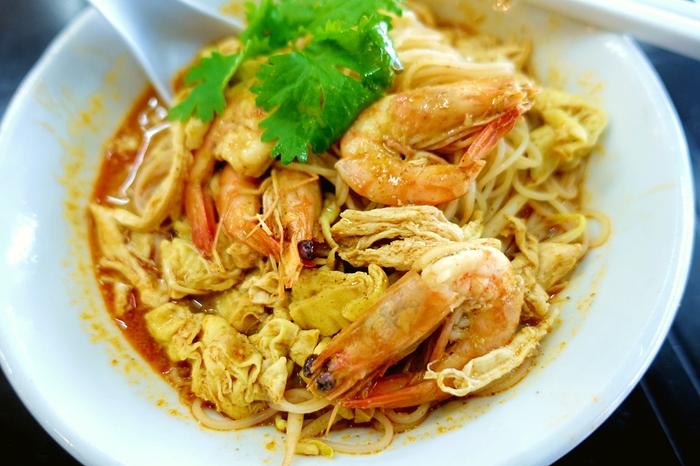 Proprietress, Vivian Sim, is Miri-born but settled in Penang 20 years ago, married a Penangite husband, and raised a Penang family. But she still has a deep longing for her homeland in far away Borneo, and she poured her passion for her native cuisine into her cooking. Lucky us here, I suppose. 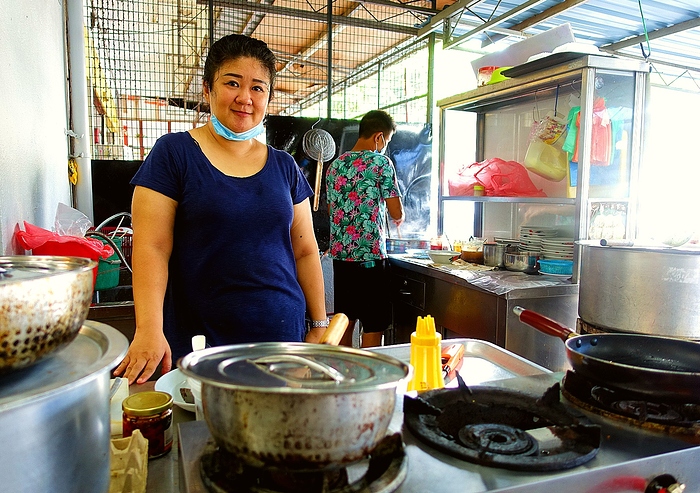 I love it when your food reviews come accompanied by a historical and sociological account. Many thanks.

It sort of put my breakfast bacon sandwich to shame.

My pleasure, John.
Hey, I love bacon sandwiches, too!!

Thanks for the history lesson. Would love to visit Borneo. (High humidity, high temperatures, biting insects…

Thanks for the history lesson. Would love to visit Borneo. (High humidity, high temperatures, biting insects…

Thanks, Jim. There is always so much to share about the various states in the Malaysian federation. They are a disparate lot - all brought together to become one country simply because they were all former British colonies.

Back to Sajo Cafe for breakfast this Sunday morning. We had two types of kolok mee: 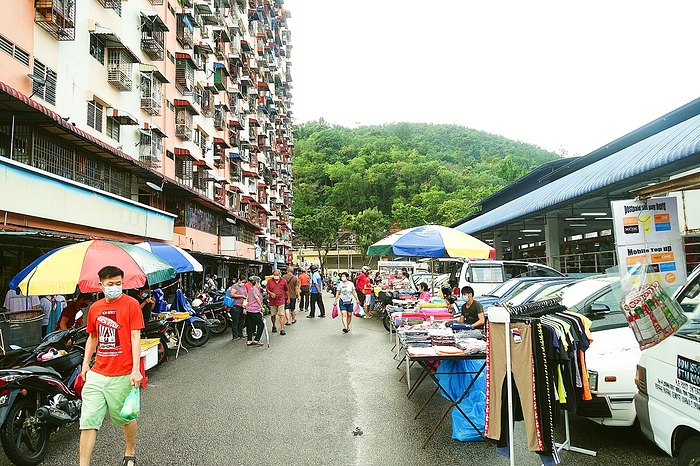 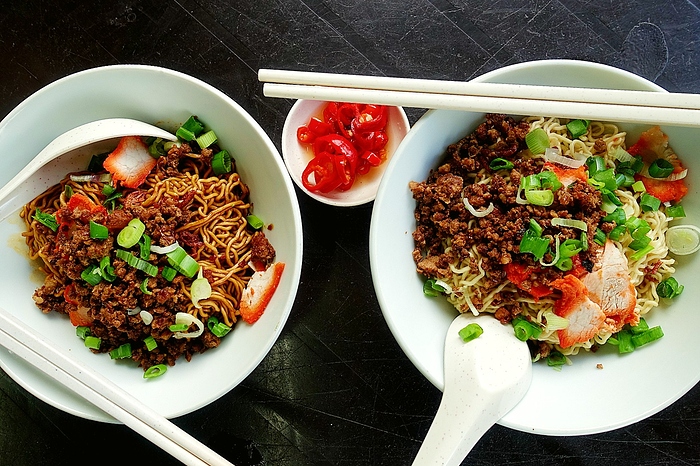 The kolok mee noodle is different from Cantonese wantan noodles, in that it’s finer, has a drier texture, and easily identified from its crinkly appearance. 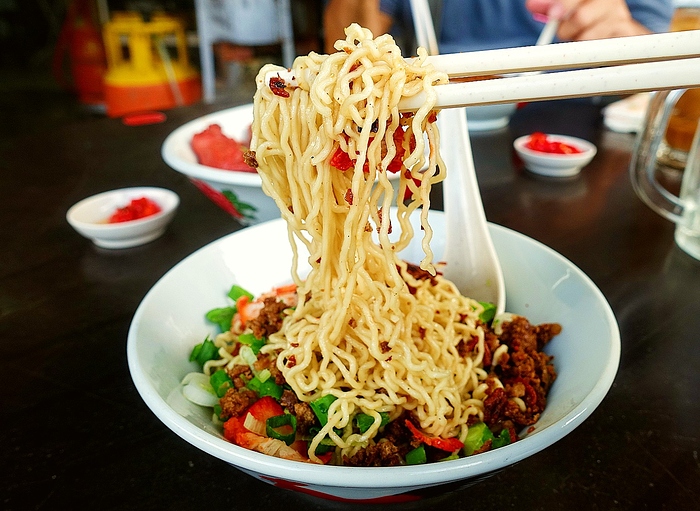 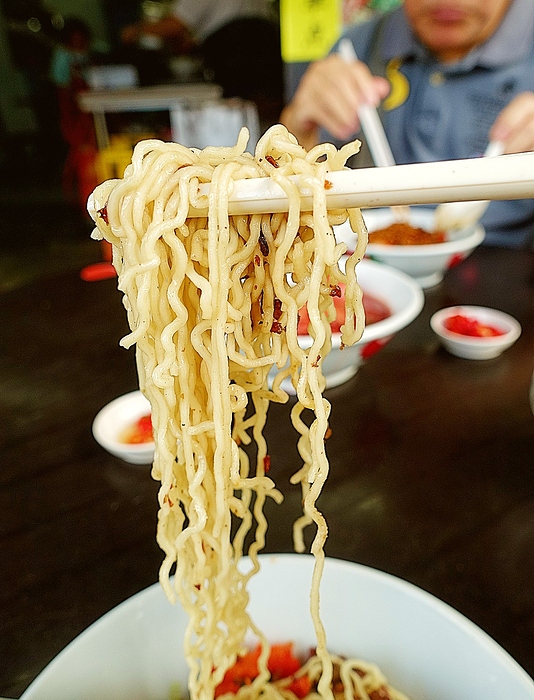 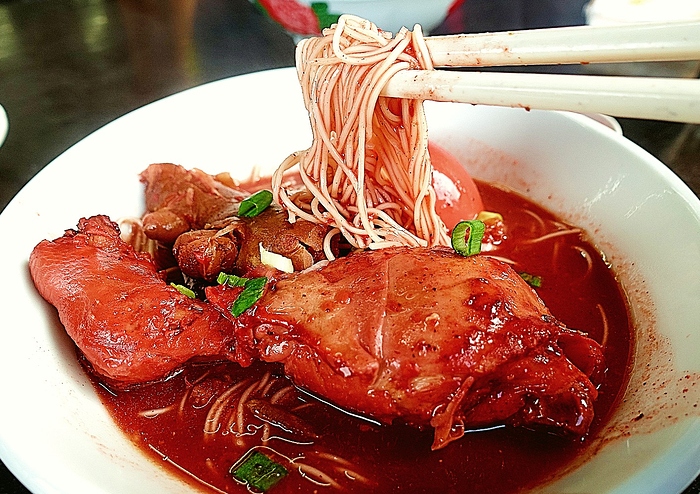 Delish. A great start to our Sunday.

Are the noodles super chewy? Wish I were there!

Are the noodles super chewy? Wish I were there!

Oh no, surprisingly not, unlike the usual Hakka noodles - these were delicate strands of noodles with a pleasant bite. No wonder the Sarawakians serve it with minimal dressing.

Oh yes, you have to come to Malaysia: Penang, Ipoh, then off to Kuching, Sarawak, on Borneo island: they have some great restaurants and cafes there, too.