Mr Lim Nan Sheng, 48, the current stall-owner, had taken over the business from his father, the well-known Mr Lim Teong Lai at this “oh chien” (oyster omelette) this stall inside Seng Thor Coffeeshop on the corner of Carnarvon Street and Kimberley Street, which was started in the 1930s by his grandfather. It’s now nearly 90-years-old. 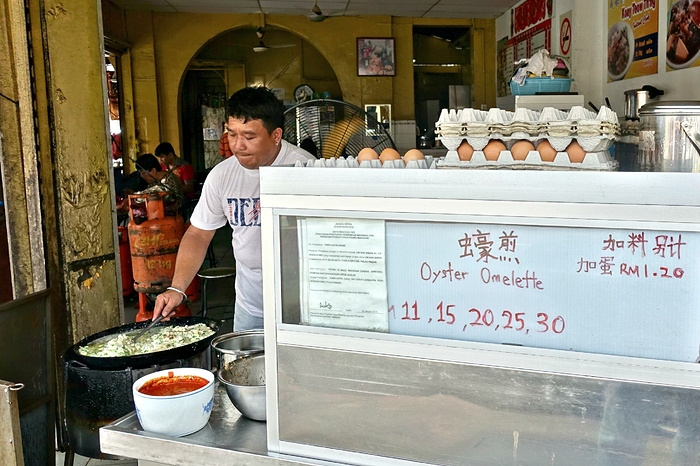 Its rendition is greasier than those at other places, but at least Mr Lim now uses vegetable oil instead of lard, as was the case previously. 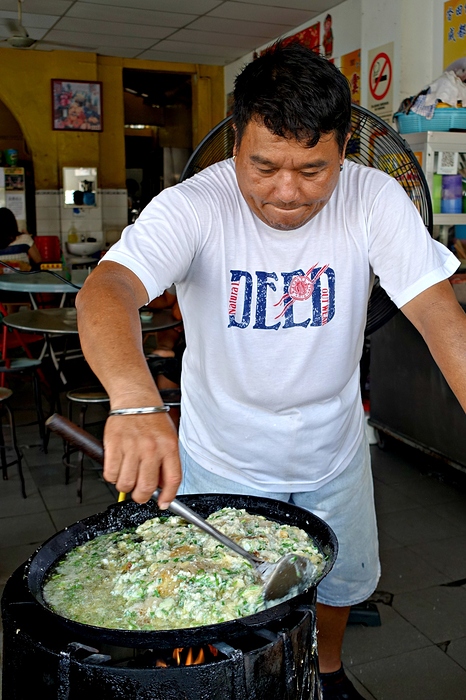 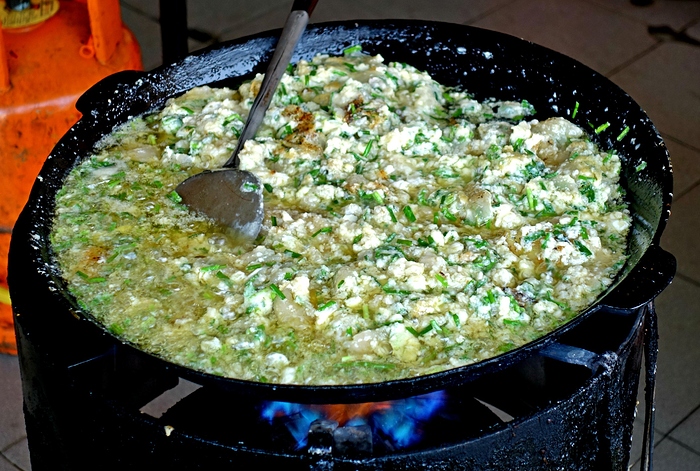 It takes a while to prepare Hokkien-style “oh chien”, where the eggs were beaten, then fried with a slurry/paste made from tapioca starch and water. Scallions were also added, plus the owner/chef’s own blend of seasoning. It takes a while for the egg-tapioca starch mixture to cook - the constantly stir-fried concoction would achieve a crisped, golden-brown “cakey” texture when it’s finally cooked - crisp on the outside, fairly moist but greasy inside. Local “baby oysters” are used, and added right towards the end, lightly sauteed in oil. 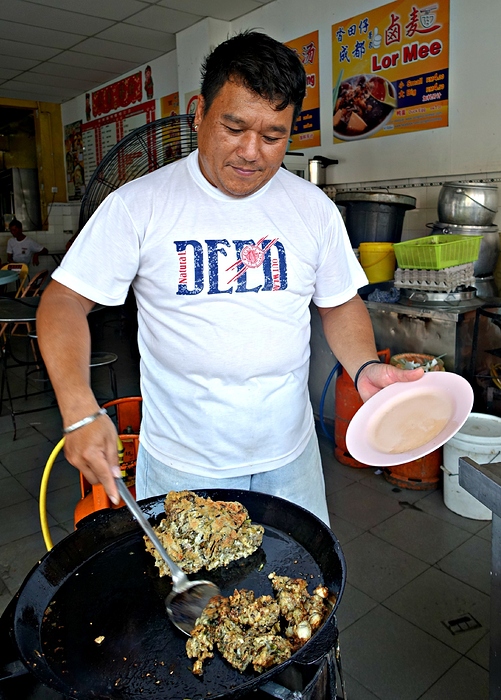 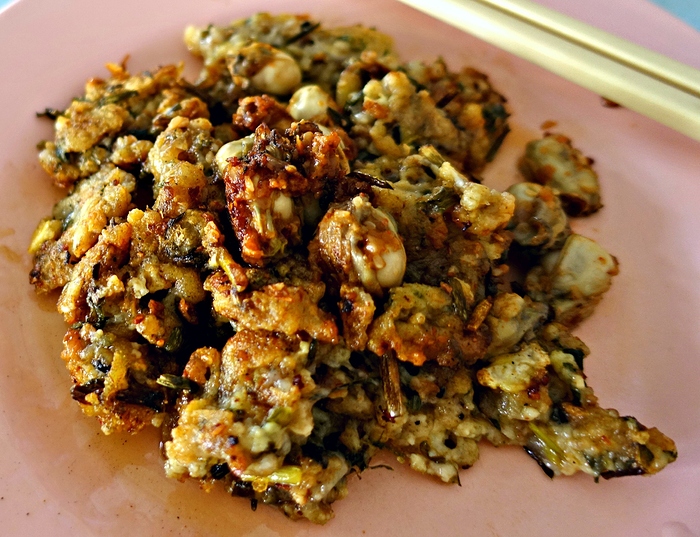 For me, the accompanying chilli sauce with lime juice and minced garlic is a must for the oyster omelette. Not really my preferred “oh chien” in town, though it’s one of the best-known. 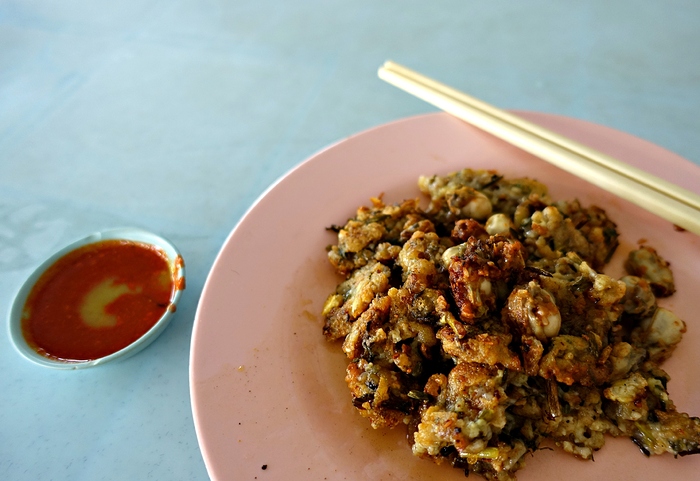 The oysters used for “oh chien” in Penang are local mini-oysters, which yielded sweet, firm flesh, suitable for frying: 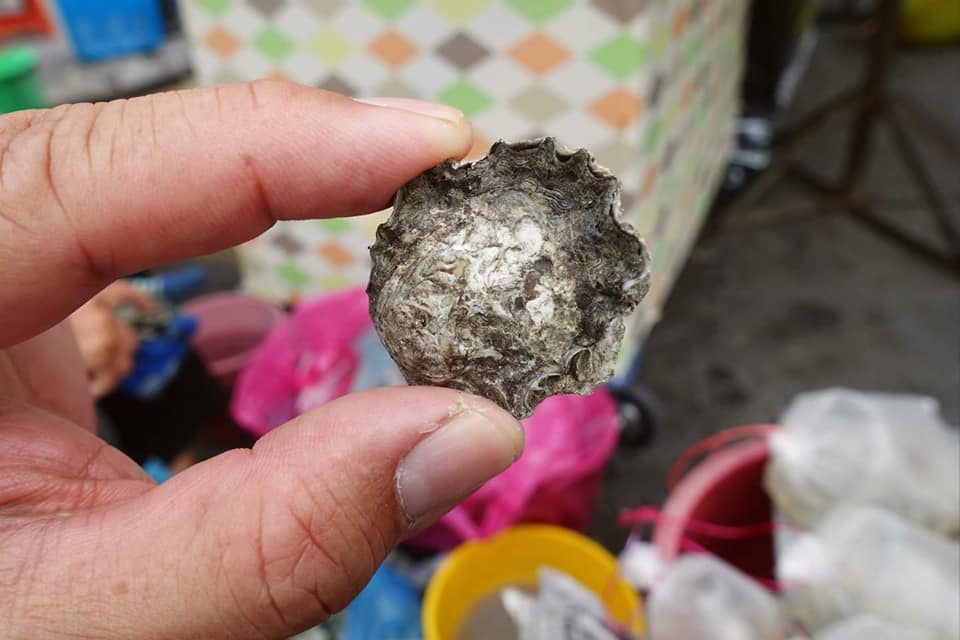 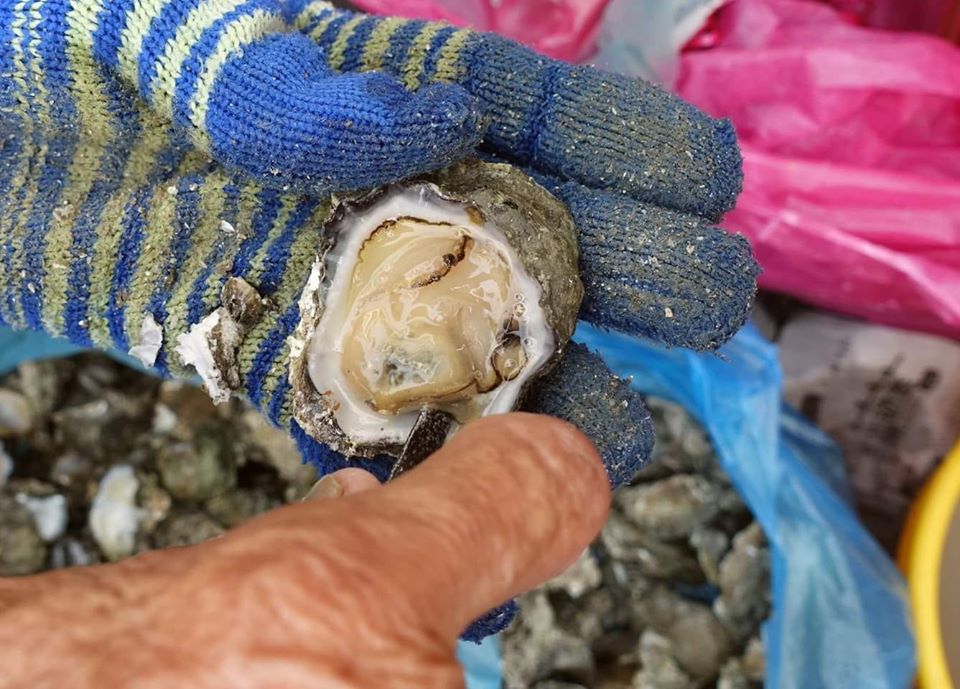 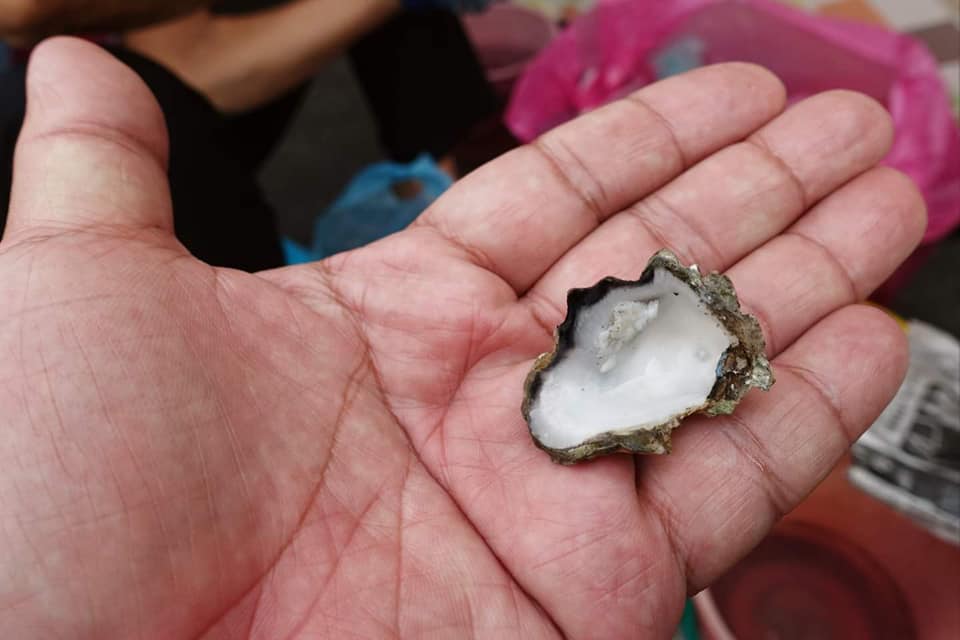 Not really my preferred “oh chien” in town, though it’s one of the best-known.

Which is your favourite in town?

I just love baby oyster cakes, the ones I ate in Penang were better than those I had in Hong Kong, due to often too cooked.

There are no standouts at the moment (for me) in Penang. The one at Presgrave Street is not bad.

I need to remember one thing - the famous Presgrave Street Hokkien mee stall is NOT open on Thursdays. Ditto the famous “lor bak” stall (formerly from Ho Ping/Kampung Malabar) right next to it. [image] [image] However, there are other options this evening, and here are what we had. Oh chien (oyster omelette) - “oh chien” is a Hokkien/Fujianese-style oyster omelette. Similar excellent renditions, with minor localised variations, can be found in many places in this region with sizable Hokk…

There is one oyster omelette stall inside Sin Guat Keong coffeeshop on Kimberley Street (also famous for its Char Koay Teow) which is worth trying:

One of Penang’s best-known hawker dish is the “char koay teow” - fried flat rice noodles, a dish of Teochew (Chaozhou/潮州) origin, but which underwent a localisation process in Penang which rendered it better than the native version in the Teochew homeland back in China. The Teochews has been emigrating to South-East Asia for centuries. In Penang, the Teochews came en masse during the British colonial period in the 19-th-century. Homesick Teochews concocted the Penang-style “char koay teow” whic…

For many people, the best “oh chien” in Penang is from Mr Gan at OO White Coffee on Carnarvon Street - he’s only open for lunch.

Loo Seow Theng (better known by her moniker, ST Loo) who purveys perhaps the best beef noodles in Penang, has moved from her long-time location at the corner of Beach St and Chulia St to her current location at OO White Coffee Café along Carnarvon Street (near the entrance to the Teoh Clan Association). [image] [image] [image] ST Loo’s beef noodles, replete with beef balls, sliced beef, tripe and tendon, are absolutely scrumptious and still tasted every bit a good as the time when her fat…

This is a specialty in my hometown, FuChien
We do call it Oh Chien meaning oyster omelets or translated, fried oyster
My mother loves OH Chien , she would look for it evertime she is expecting a child. I posted a recipe here a month or so ago when I found a recipe for I believe (? calamari omelette but there was no response from anyone.)
I cannot find it now.
If you can find it, it is a very good recipe.
I do not measure when I cook.
It would be a recipe homeowners can follow, excellent / not greasy ,/ healthy
I found it in a Chinese restaurant in DC ( not in the menu) but can ask the chef to cook it for me and my friends which he would grudgingly oblige as his wife is patient. The restaurant is probably non existent now.

The recipe calls for sweet potato starch ( fine one as opposed to the coarser kind) , an egg or 2 to bind, depending on how much you are cooking, very fresh bean sprout, rinsed and dried on a towel, lots of chinese chives, ( green type , yellow if yo u can find them but quite pricey especially y when they have flowers on them , fresh oysters, you can chop it if you want and its juice as well as tiny shrimp that i precook, sauteed in olive oil, ginger and garlic, S/P. SCALLION IS NOT WHAT WE USE. YOU WILL FIND THE CHINESE CHIVES ARE SO MUCH TASTIER…
Mix all of these together, consistency of pancake batter, then pan fry on very lightly greased pan. I use my Vulcan Plancha which is part of my range, as I will cook while people would eat them as I am cooking… Can never cook fast enough for m guest who hovers around as I am dying them Alternatively, you can buy very small 2-5 inches size cast iron pan to cook it in for presentation. We eat it with ketchup and tabasco.

Pls see my reply to klyeoh
I think if y ou are adventurous you will cook this yourself
Use Chinese chives and bean sprout and sweet potato starch ( fine ones no coarse type )
Hope u will try it.
It is awesome.

Last year we had the Oh Chien at presgrave street and thought it was OK but don’t remember loving it.

We also went to the stall at Lam Ah as I’d read it had one of the better renditions - it was different, lots of tapioca starch but also very very greasy, definitely not the best. Googling leads me full circle back to klyeoh posting here and someone else’s blog saying how the chef has moved from Lam Ah to Carnarvon Street at the coffee shop next door to Seng Thor. So looks like Lam Ah has a new Oh Chien stall that isn’t what it was.

You’re either in the know or not when it comes to eating in Penang!

The last time I passed by that neighbourhood (corner Beach St and Chulia St), Lam Ah was no more - replaced by a motor workshop! Mr Gan Teik Seong, formerly of Lam Ah, has indeed moved (together with his long-time co-hawker at the now-defunct Lam Ah) Ms Loo Seow Theng, to ply their trade at OO White Coffee on Carnarvon Street.

Loo Seow Theng (better known by her moniker, ST Loo) who purveys perhaps the best beef noodles in Penang, has moved from her long-time location at the corner of Beach St and Chulia St to her current location at OO White Coffee Café along Carnarvon Street (near the entrance to the Teoh Clan Association). [image] [image] [image] ST Loo’s beef noodles, replete with beef balls, sliced beef, tripe and tendon, are absolutely scrumptious and still tasted every bit a good as the time when her fat…

Back to Seng Thor this afternoon to take-away some lunch options. Dining in is now allowed in Malaysia for fully-vaccinated individuals, but many coffeeshops in Penang are still reluctant to allow dining-in, preferring to stick to offering take-outs or home deliveries only. 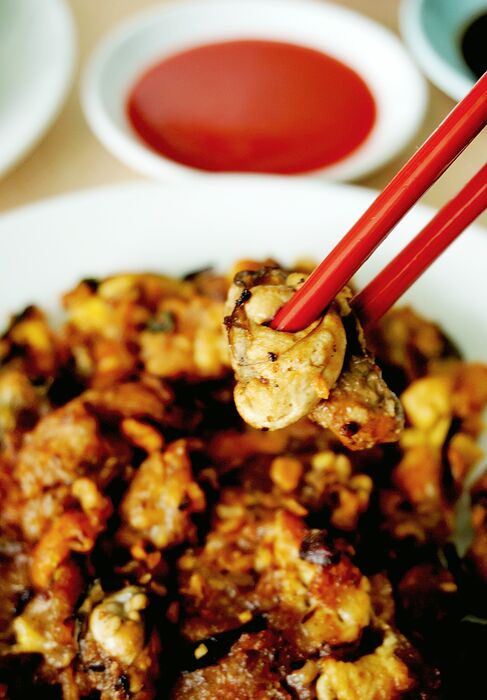 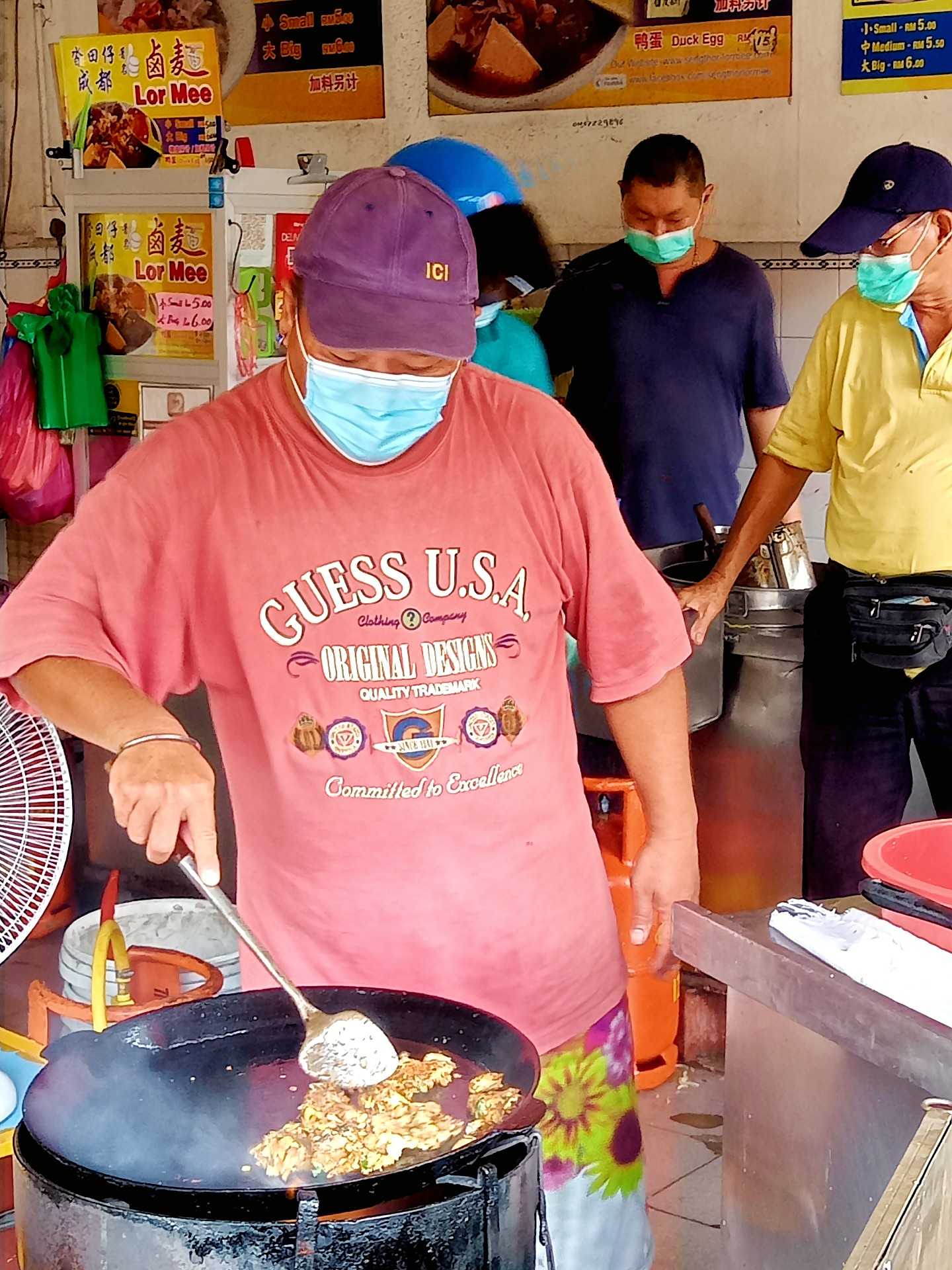 Lor mee is a Hokkien/Fujianese noodle dish of yellow wheat noodles and rice vermicelli, smothered with a gooey, gloopy brown gravy, scented with Chinese 5-spice and soy sauce, and streaked through the egg ribbons. The lor mee here was garnished with soy-braised pork, hard-boiled egg, and braised tofu.

Lor mee in Penang has a gentler flavor than its Singaporean counterpart. In Singapore, lor mee may also include fish-meat and crisp-fried batter crumbs for additional texture. Singapore lor mee will also be topped with minced raw garlic, and a splash of black vinegar.
Penang lor mee, on the other hand, will never have fish-meat, whilst some places offer soy-braised chicken feet and pig’s intestines, which one cannot find in the Singapore version. So, stark regional variances for the same Hokkien noodle dish. 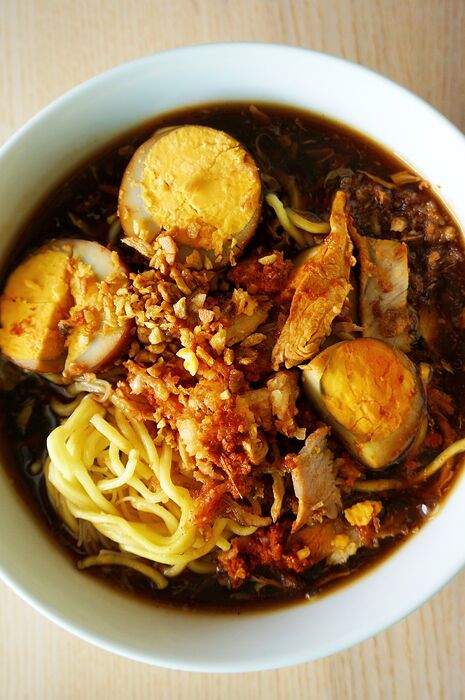 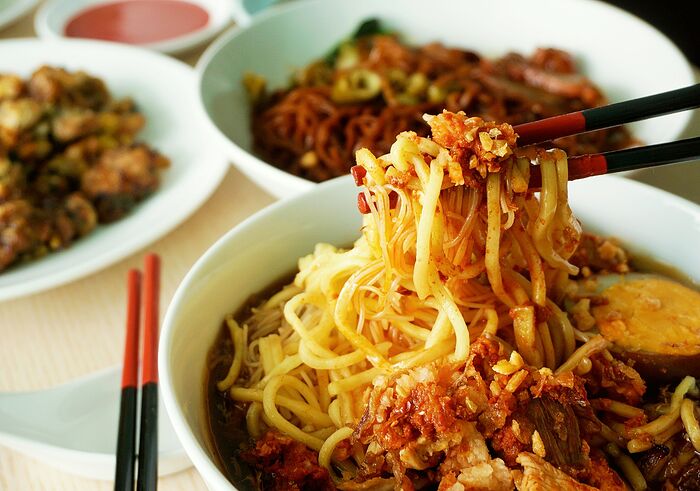 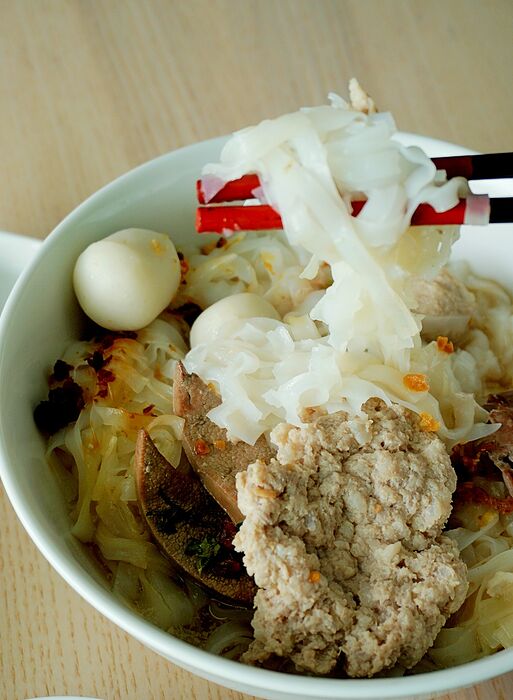 In typical Malaysian-style, wantan noodles here would be served with sharp, pickled green chilis, to cut through the noodles’ richness. 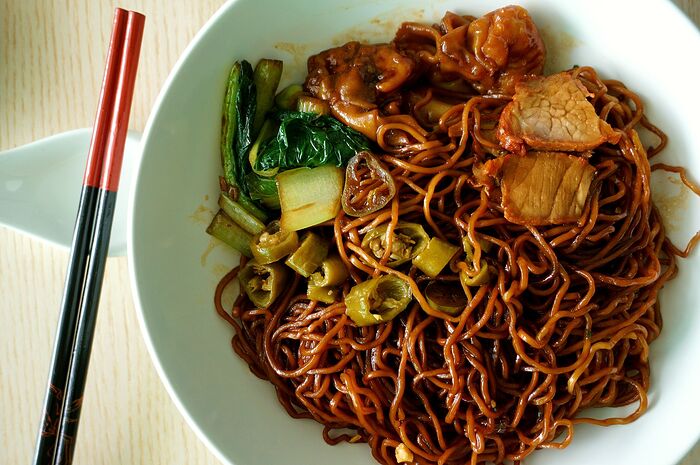 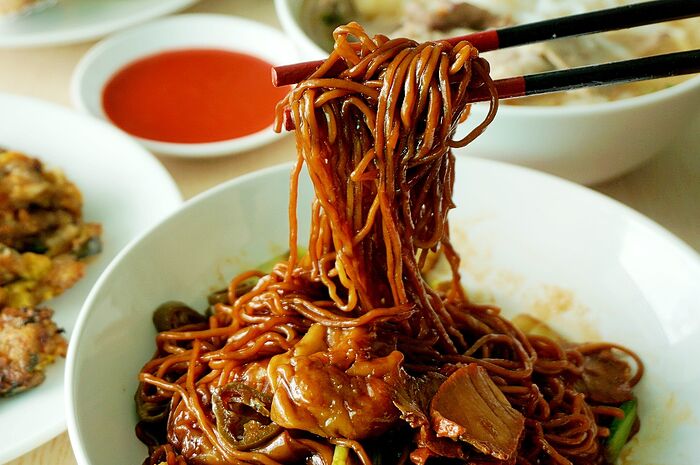 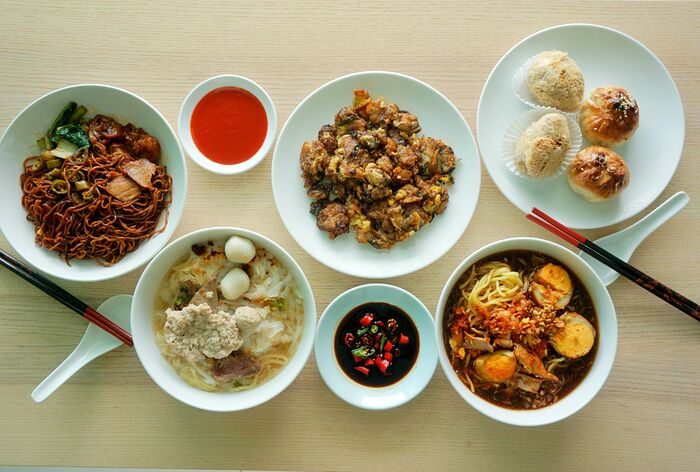