Muthu’s Chettinad Mess is a popular little Indian eatery is located on Acheen Street, facing Armenian Park (closer to the intersection with Carnarvon Street, than Beach Street at the other end). Known among local Tamil-Indians (who formed their main clientele) simply as “santhu kadai” (meaning ‘alley shop’), it was one of the pit-stops featured in Anthony Bourdain’s “No Reservations” episode on Penang. There is no signboard outside or any where of its name - just look out for its yellow walls and pink door- and window-frames on 143 Acheen Street. 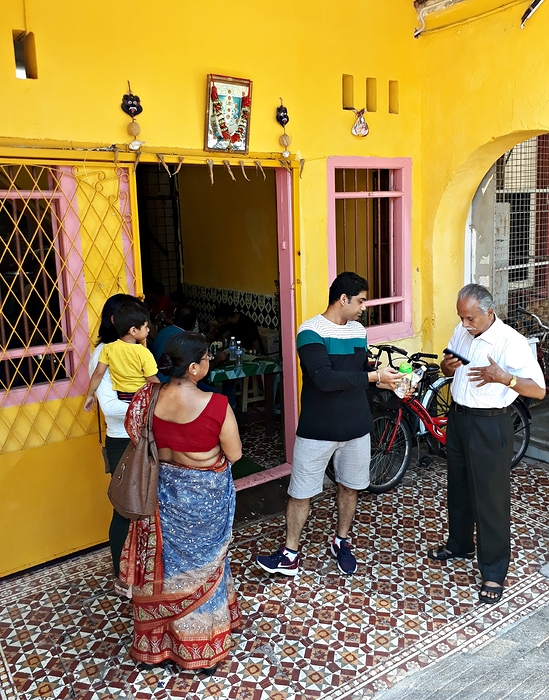 Muthu’s only opens for lunch, from 11am to about 2.30pm, Monday to Saturday. It only serves the traditional Indian banana leaf curry rice meal. 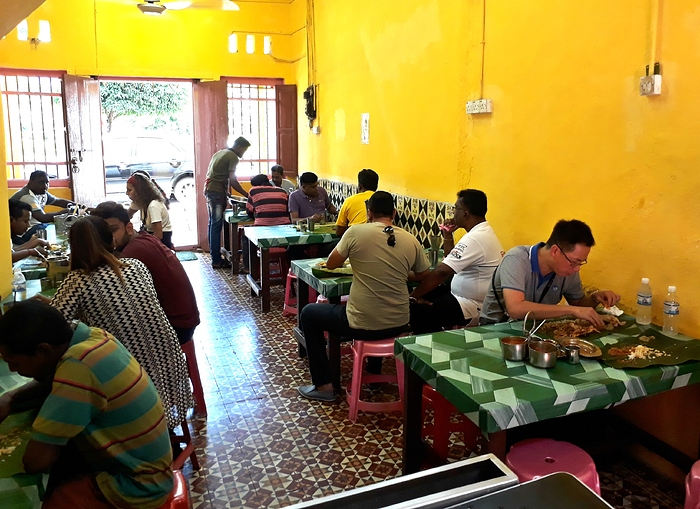 Just sit down and one of the waiters will come round to lay a banana leaf on the table in front of you. It’s not a placemat - it functions as your plate. One of the waiters will come by and ladle two types of curried vegetables and a chutney onto your banana leaf, followed by a heapful of steamed white rice. A trio of curry gravies (chicken, crab and dhal) in metallic gravy-holders wil be placed in front of you. Help yourself to the gravies - the gravy-holders are shared between different tables, so after you’ve ladled your choice onto your rice, the waiter(s) may take the vessels away. This constitutes the basic banana leaf rice set meal and costs only MYR7 (US$1.80). 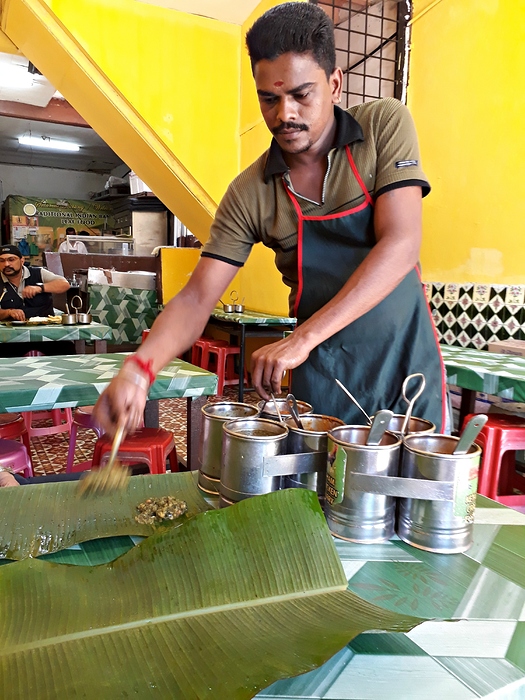 The waiter(s) will then come around with trays of “add-on” side-dishes which you might want to try: crab masala (the eatery’s signature dish), curried fish, curried tripe, mutton curry, a very spicy chicken Varuval, egg omelette, and various spiced vegetables. 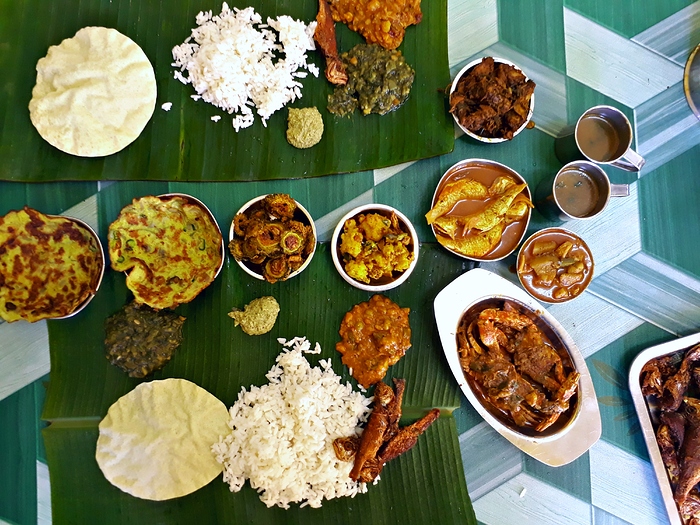 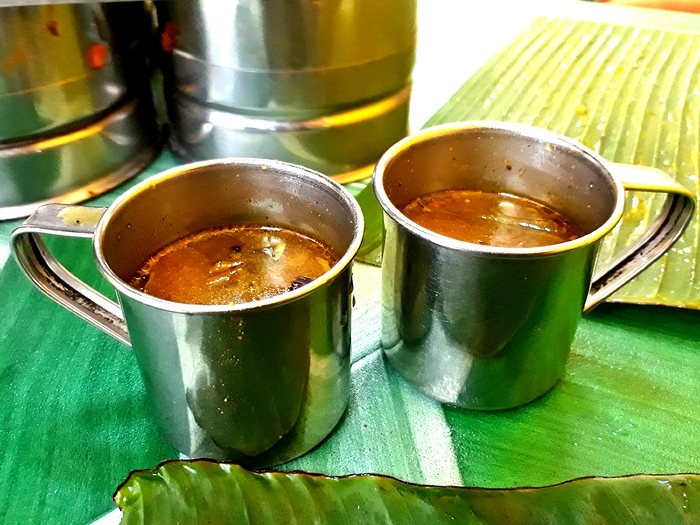 Some of the best side-dishes which we tried were: 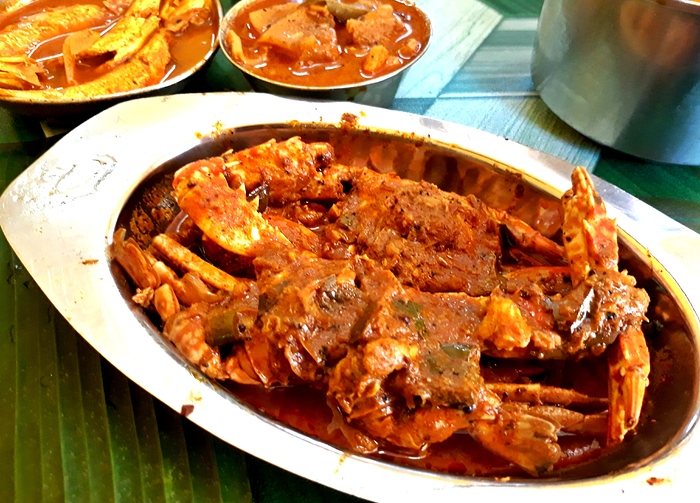 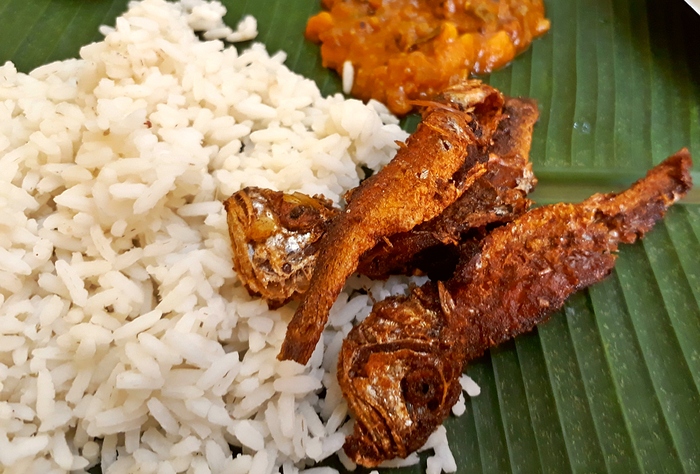 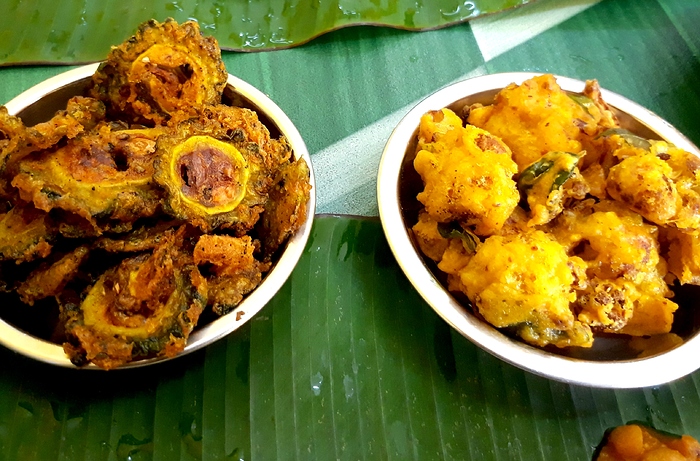 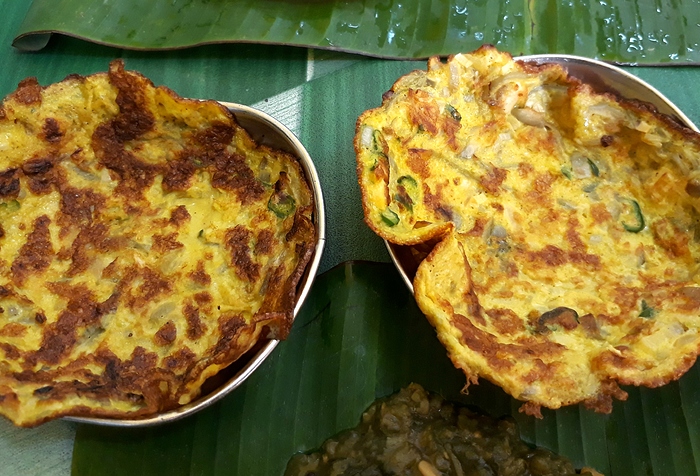 Muthu’s do not serve any other drinks or beverages besides bottled plain drinking water, or a diluted salted yoghurt drink with spices. 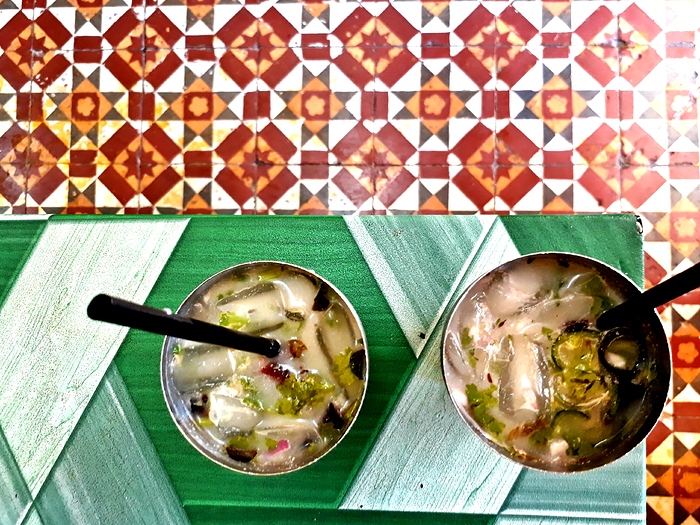 Their curries were ultra-spicy (to my palate) but very popular among the mainly Tamil-Indian clientele. My lunch bill - for two persons, including the yoghurt drinks, amounted to MYR45 (US$11.40).

Come early - before 12 noon - if you want to snare a seat. There is also a long communal table on one side of the dining room. We were there at 11.45am and the eatery was quiet and empty. Half an hour later, the lunch crowd came pouring in. 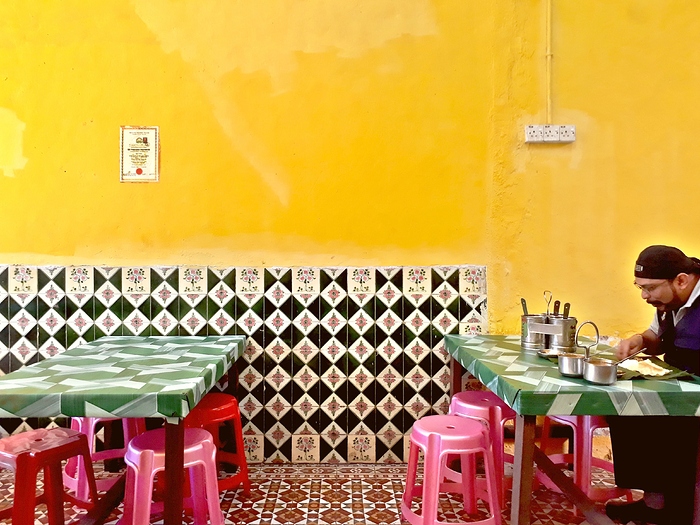 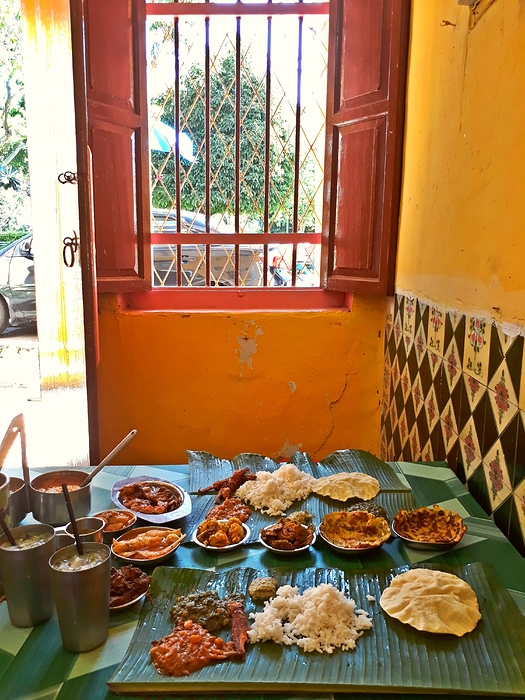 Acheen Street, and neighbouring Armenian Street, are pretty, picturesque little streets within the historic quarter of old George Town - worth exploring before or after one drops in for a meal here. 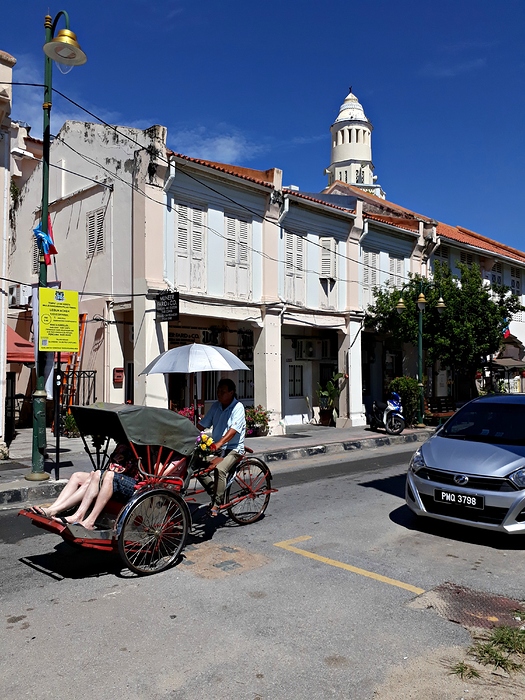 Is crab masala a traditional Tamil dish, or a local Penang adaptation?

And what does ‘mess’ mean in South Indian food? I have been under the impression that it just means military mess hall/ cafeteria food but curious why they name the place ‘mess’, or whether it serves the type of food in mess halls.

Is crab masala a traditional Tamil dish, or a local Penang adaptation?

It seems to be a pretty generic crab dish in Penang, although the term “crab masala” is not usually used here. Chinese-Penangites tend to call this dish “Indian crab curry”, whereas Tamil-Penangites call the dish offered by this restaurant “crab masala”.

I’ve seen crab curry in Sri Lankan-Tamil restaurants - so I take it that it’s probably a Sri Lankan import than a Tamil Nadu one. I’d been to Chennai a few times and eaten extensively there, but never encountered crab curries yet.

And what does ‘mess’ mean in South Indian food? I have been under the impression that it just means military mess hall/ cafeteria food but curious why they name the place ‘mess’, or whether it serves the type of food in mess halls.

I think the “mess” used here originate from the military term as you’ve mentioned. Somehow, it was one of the British words adopted by the local Indian community, although the meaning would have changed. In the context here, it probably just referred to a place serving food.

Back to Santhu Kadai for lunch on Buddha’s Birthday/Wesak Day (29 May), which is a public holiday in Malaysia. 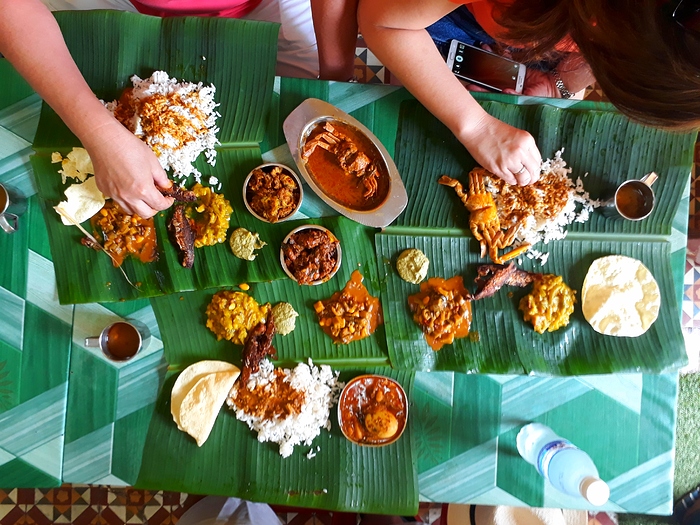 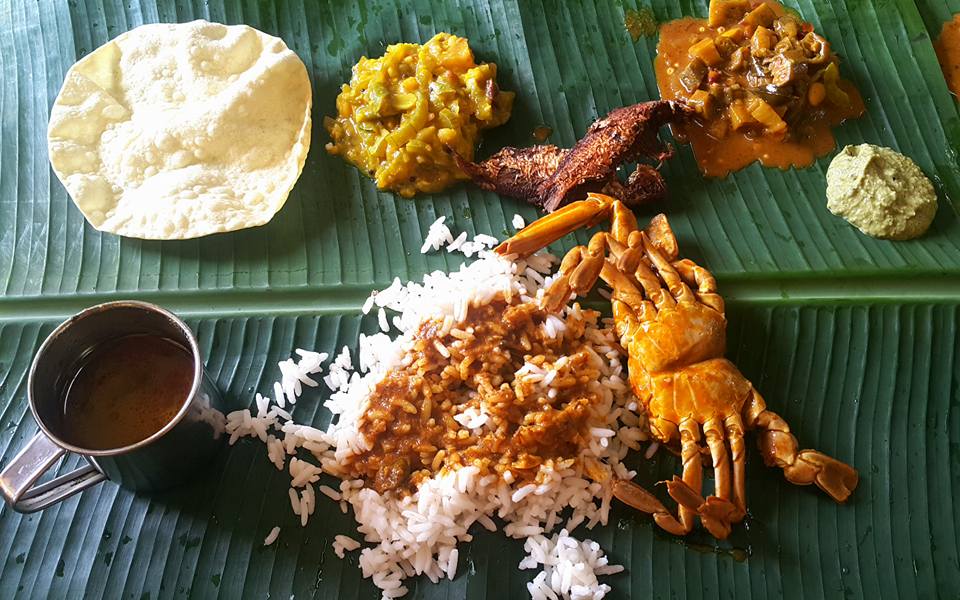 Choice of curried sides to choose from: 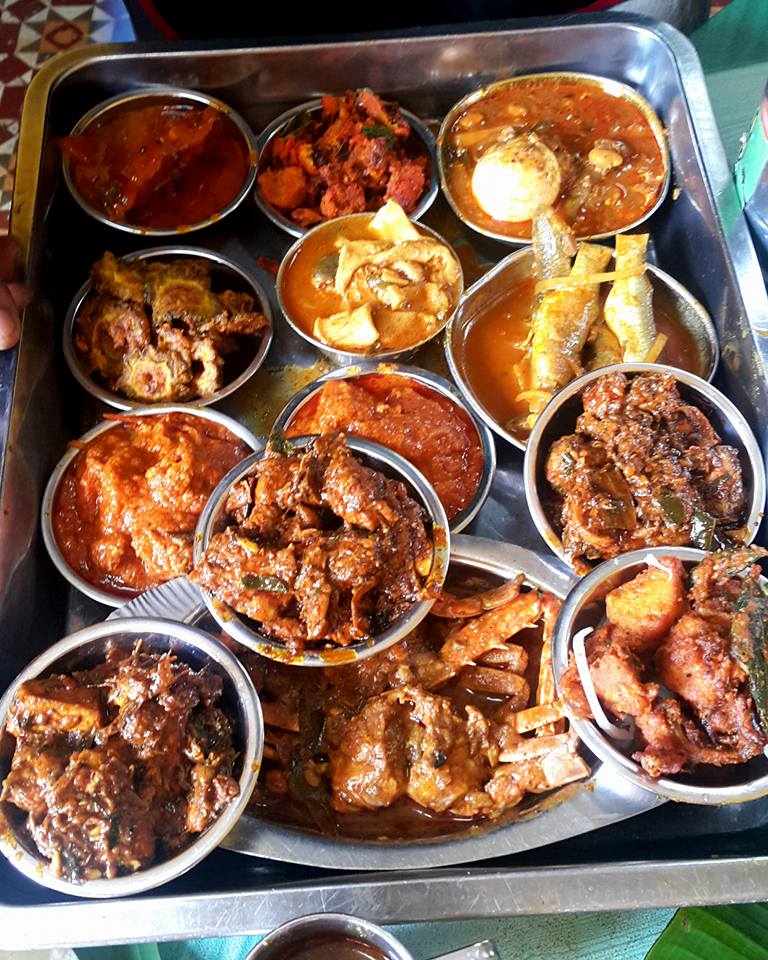 The restaurant has just been renamed Muthu Banana Leaf Restaurant by its current owner, PVM Magen. Mr Magen first took over its management in Sep 2010, but shared that the eatery was founded over 80 years ago by an enterprising émigré from Kalaiyar Kovil, Tamil Nadu, India.

It had started off as an eatery within the Sri Thayemanggalam Muthu Mariamman Hindu temple on Lorong Lumut, around the corner from its current location. At the time, it was known as “Bottle Kadai Sapadu” - a reference to the eatery’s location near a bottle shop there.

Muthu Banana Leaf Restaurant is covered by the Penang Arts Council’s new 10X10 program which will feature 10 heritage eateries on the island. 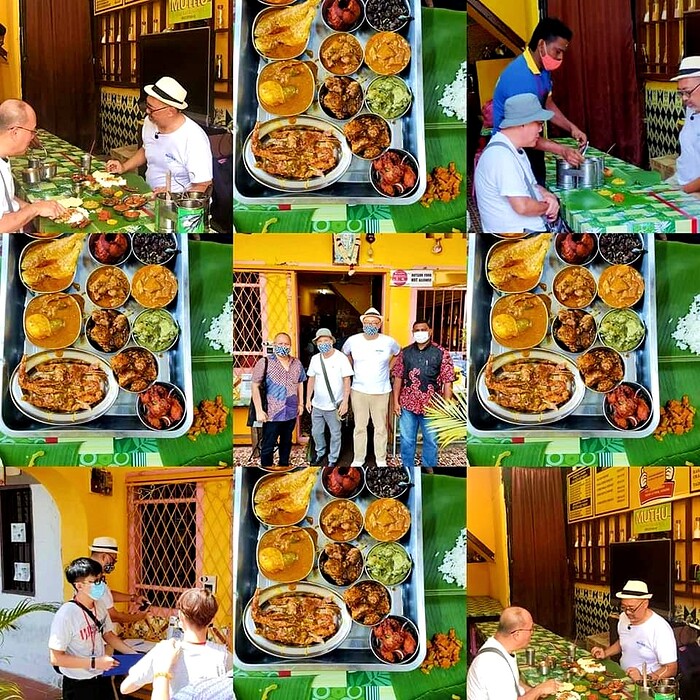 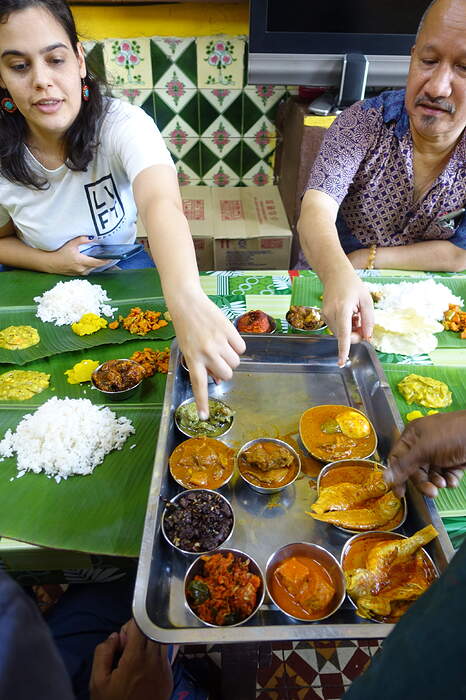 the eatery was founded over 80 years ago

Impressive longevity. I struggle to think of more than a couple of places in my city that have that sort of heritage.