Koay teow th’ng is another of Penang’s best-known street food dishes: flat rice noodles (koay teow) in a light, flavorsome broth (th’ng) made from boiling chicken, duck and pork bones. This Teochew/Chaozhou dish also includes fish-balls and fish-cakes, all made from fish forcemeat.

The Teochew people harked from Guangdong Province in Southern China, near its border with Fujian Province, which made the Teochew dialect closer to Minnan dialect spoken in Fujian than the Cantonese dialect of its home province. Echoes of how the Catalan language seems closer to French than Spanish.

Historically, the Southern Chinese from Fujian has been going to South-east Asia since the 13th-century for trade. In the 19th-century, constant civil strife and famine drove thousands of Cantonese and Fujianese peoples to South-east Asia. The Cantonese, especially from Toishan (Taishan) made their way to the West, building railroads in the American West and working the plantations in Mexico and the West Indies, whilst their compatriots worked the tin mines in British Malaya.

The Teochews, together with the Fujianese dominated the mercantile/retail trade in South-east Asia in the 19th-century: Siam (modern-day Thailand), British Malaya, Spanish Philippines, French Indo-China and the Dutch East Indies (modern-day Indonesia).

But the Teochews went one step further: they also went into street food in a big way. The streets of Bangkok, Singapore, Saigon or Penang will have itinerant Teochew street food vendors hawking their goods. Vietnam’s hu tieu Nam Vang (i.e. “koay teow” from Phnom Penh) was so-called because Teochew noodle vendors from Cambodia came to Saigon to hawk their dishes.

A close relation to the hu tieu Nam Vang is Penang’s koay teow th’ng - a Teochew noodle dish which consisted of flat rice noodles (called “koay teow”) in a light broth usually made from boiling chicken, duck or pork, or a mixture of those meats. The soup noodle dish would be garnished with springy Teochew fish balls, slivers of chicken, duck or pork, chopped scallions, golden-fried garlic in oil, lardons or, in some places, minced pork. 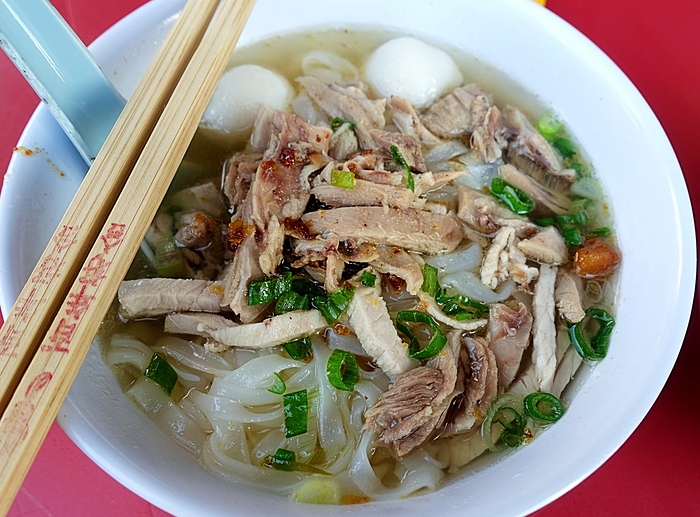 One of the most popular “koay teow th’ng” spots in George Town is Lorong Ngah Aboo Duck Meat Koay Teow Th’ng, which has been operating in the little alleyway, Lorong Ngah Aboo, off Kimberley Street for the past 3 decades. Kimberley Street was named after Lord John Wodehouse, the Earl of Kimberley, who was the British colonial secretary for the Straits Settlements, consisting of Penang, Malacca and Singapore, in the 1870s (writer P.G. Wodehouse was a cousin).

One sits on small plastic stools on Kimberley Street’s pavements to eat here in the mornings. The stall starts early, around 7.30am, and closes by late-morning, when the tropical sun makes outdoor dining quite stifling. 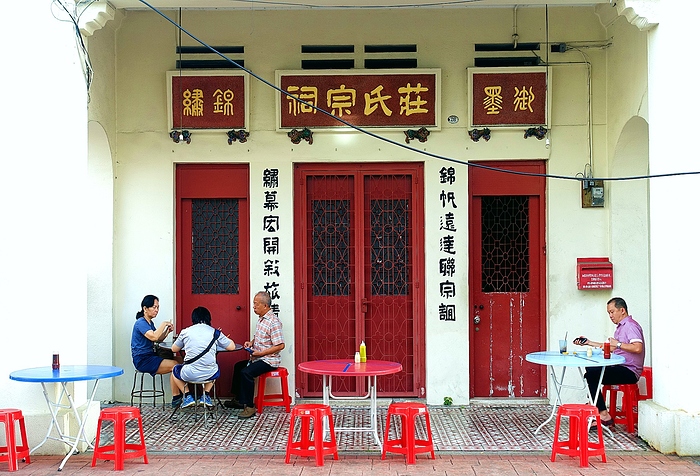 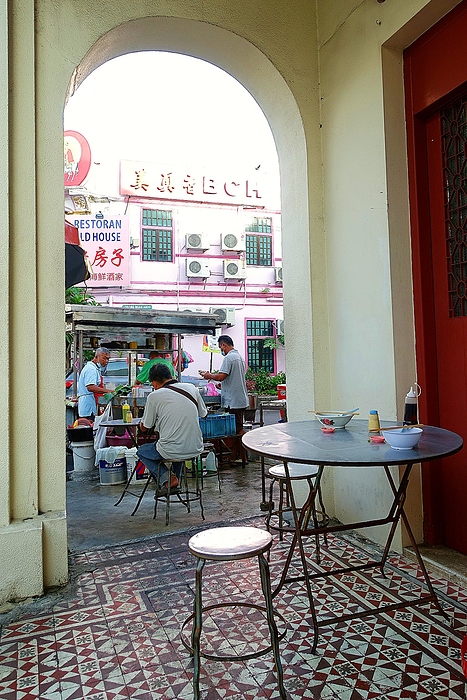 Koay teow th’ng man, Ng Kok Weng, busily blanches the noodles, drains them and puts them in individual bowls, where an assistant would garnish each bowl with the meats and other condiments according to each customer’s orders. Then, Mr Ng will then fill up each bowl with the steaming broth. 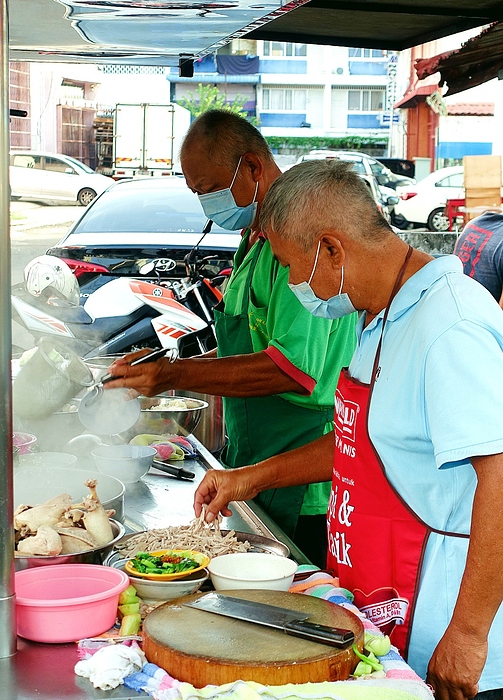 Penang “koay teow th’ng” has a much lighter taste, and less greasy than its heavier cousin, the KL-style pork noodles in soup. 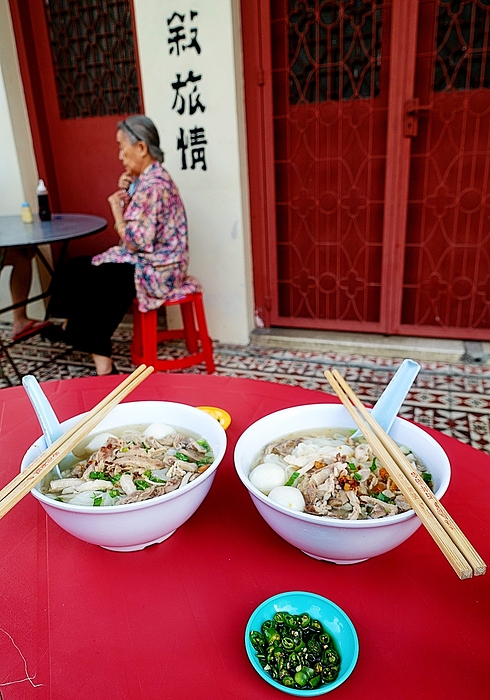 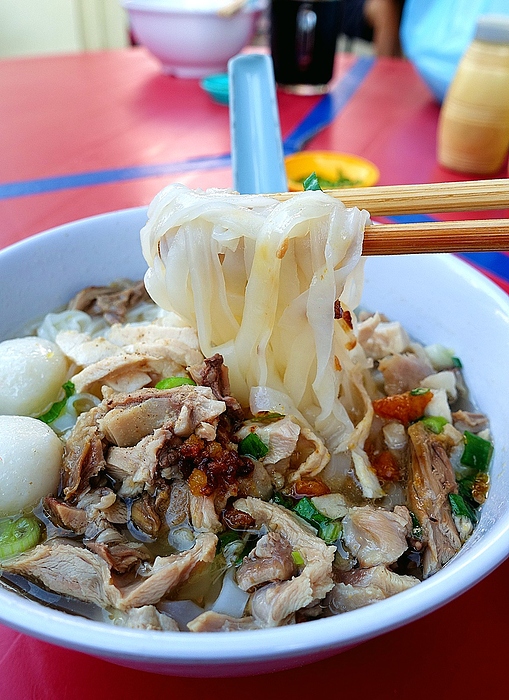 Looks much better and more substantial than the other “from Pnom Penh”.

Can’t wait til this virus sh*tshow is over so I can travel again!

Can’t wait til this virus sh*tshow is over so I can travel again!

And, to be realistic, it does look like we all have to sit tight till end-2021 before we can go gastro-hopping internationally again.

On the positive side, I collaborated with former Reuters Singapore photographer, David ST Loh, on his latest book, Simply Penang, of which I’m the writer. The book has just been published early this month. Years from now, I shall look back and remember this as “the book I wrote during the 2020 COVID-19 pandemic lockdown”.
There was one chapter on all the street foods of Penang, including the Top Ten Street Food list. 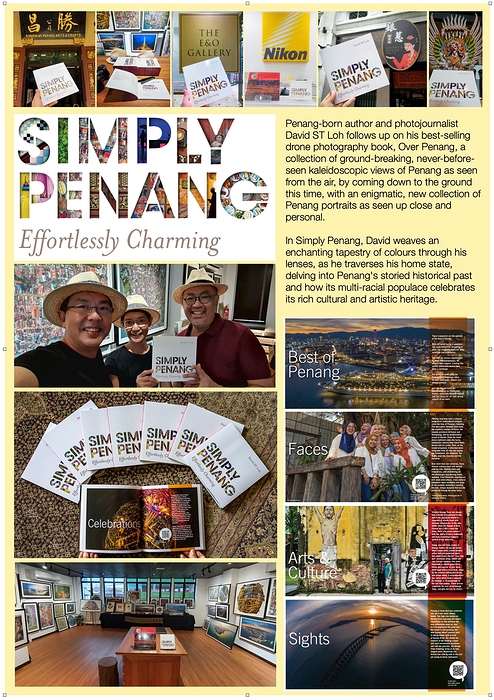 That’s so cool! I want to have a look when I make it there

Congrats! Great use of covid time! A good way to promote the city’s tourism and food.

Congrats! Great use of covid time! A good way to promote the city’s tourism and food.

Thanks @naf ! Thank God for the Internet - makes a lot of things possible when we’re unable to leave our own homes!

Congrats on the book!

Thanks for the report and the historical background. Looks like a delicious bowl. Koay teow th’ng certainly looks a lot like hu tieu nam vang. I’ve only had hu tieu nam vang in the US, and the broth is usually clear and made with pork and dried shrimp I believe. Do some places also serve it dry style with the soup on the side?

Congrats on the book!

Do some places also serve it dry style with the soup on the side?

Yes, there is a “dry” form where the noodles are tossed in a light soy sauce-lard dressing, whilst the soup is served on the side. It’s a relatively “new” development for this dish - there wasn’t such an option in my youth, which will be about 4 decades ago (1980s).