Jalan Rumbia is Penang’s “Little Indonesia” district. It’s only 15 minutes’ drive from my place here, but the last time I was in that area was back in 2005, during a business trip to Penang from Singapore.

Somehow, because there is always so much to see or do elsewhere in Penang, it never occurred to me to back there to explore the genuine Indonesian cuisine there ever since I moved to Penang 3 years ago. Until today, that is, when a friend suggested we have a look at what “Little Indonesia” has to offer in terms of dining options. 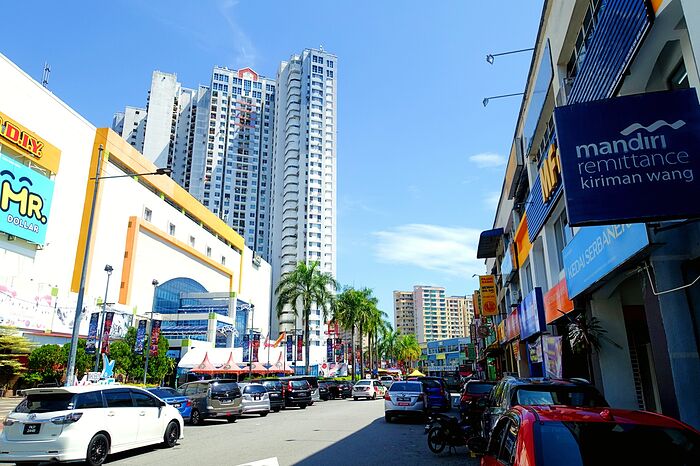 The whole place “feels” Indonesian the moment we stepped out of our car. Indonesians who work in the manufacturing and logistics hubs here in Bayan Baru, one of Penang’s industrial free trade zones, live in this area, so there are numerous regional Indonesian eateries catering to their food preferences. Local Malay cuisine, although it “looked” rather similar to Indonesian, tastes very different, so Indonesians tend to gravitate towards their own types of eating places, if given the choice. 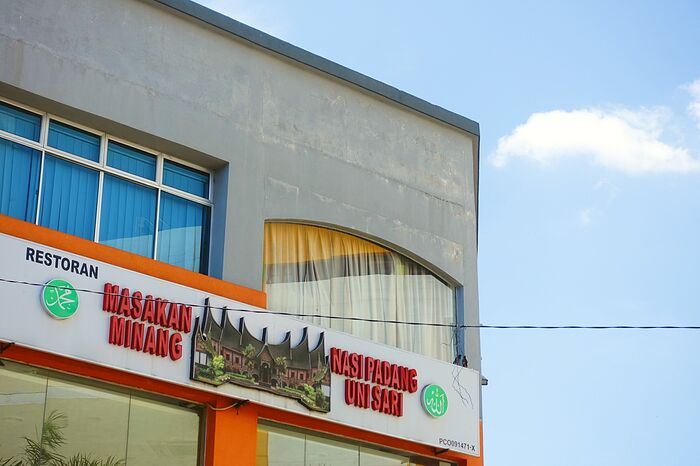 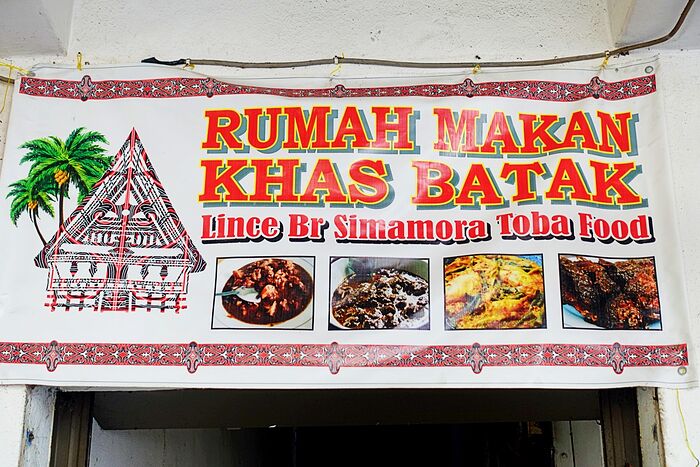 Besides restaurants, there are also kerb-side food stands where customers queue up to pick-and-choose their lunch options. The whole place gets busy at lunch-time as factory workers streamed out to get their sustenance. 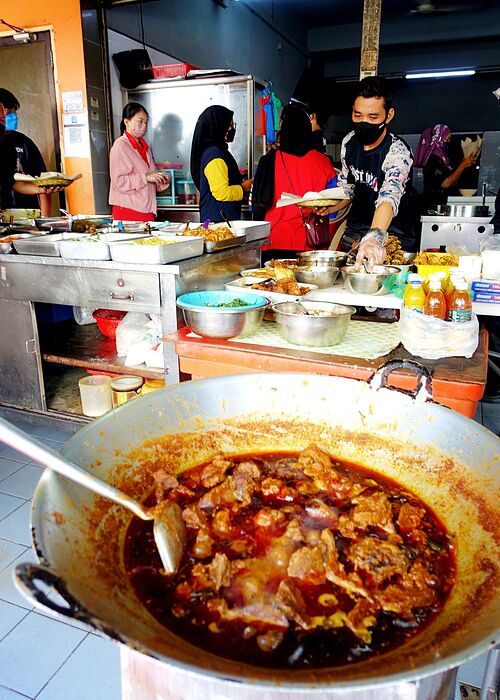 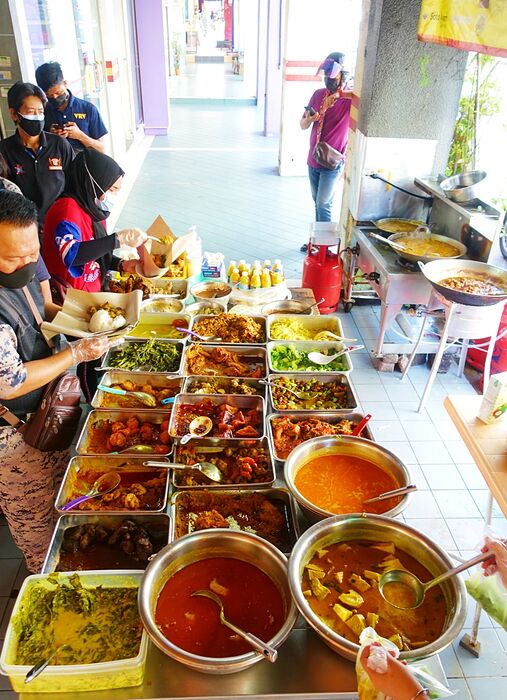 We opted to eat at the the popular Medan eatery, 𝗔𝘆𝗮𝗺 𝗝𝗶𝗻𝗴𝗸𝗿𝗮𝗸 𝗠𝗯𝗮𝘅 𝗔𝗿𝗱𝗶𝗹𝗹𝗮. The busy eatery offers a good choice of rice and noodle dishes, paired with either Indonesian-style batter-fried chicken or beef meatballs (“bakso”). 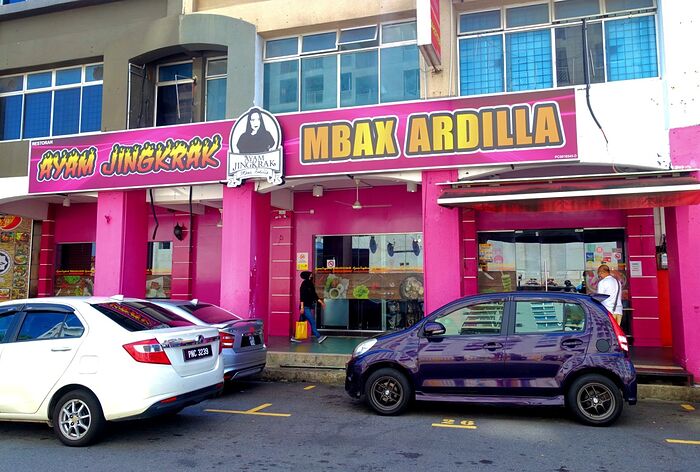 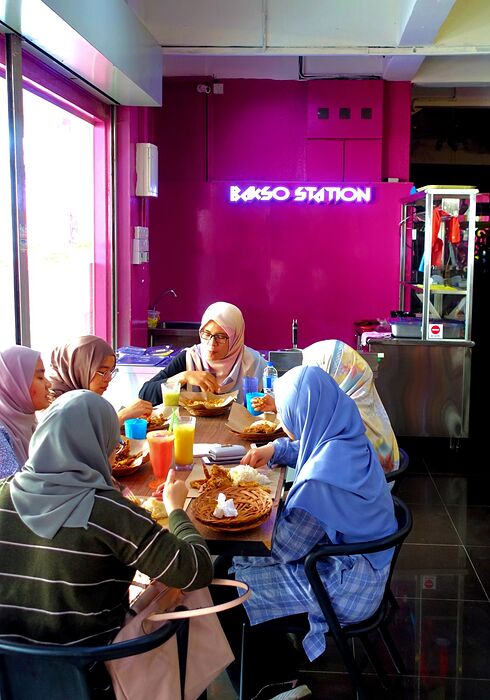 Our lunch options today consisted of: 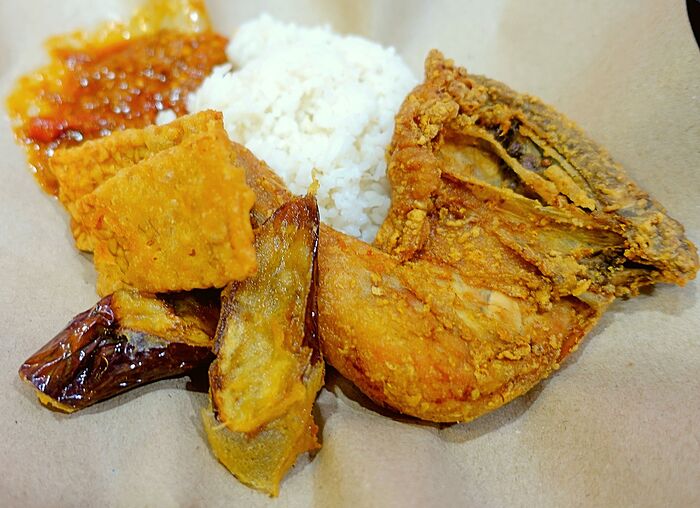 If we thought the chili dip served on the side for our Ayam Jingkrak dish was Hellishly-hot, that same dip must’ve been ladled into the Ayam Geprek (in copious amounts) when the shredded chicken was griddle-cooked, then topped with shredded cheese, which would then be tossed into the whole ensemble until the whole thing looked like some lava flow from a volcanic eruption.
Then, they served it to us with white rice, and a token serving of exactly two cucumber slices. The dish was so spicy, we left most of it uneaten. 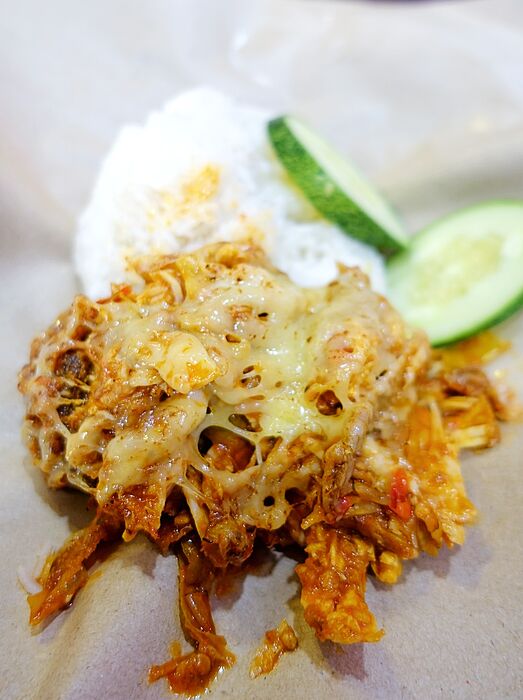 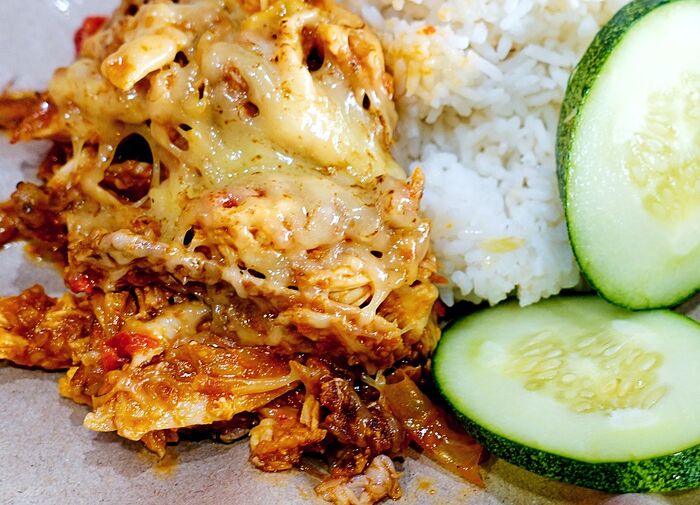 The bakso geranat - I think “geranat” is a reference to the meatball’s “grenade” size! I Googled, but there’s nothing on the Web, except this restaurant’s menu listing, which used that term. But there are lots of Indonesian eateries with “bakso bola tenis” (“tennis-ball” meatballs).

The “Bakso geranat” here, or any of those “bakso bola tenis”, are essentially Indonesian Scotch eggs, with hard-boiled egg centres, but inadvertently served in a lightly-spiced (cinnamon, nutmeg, cloves) broth. 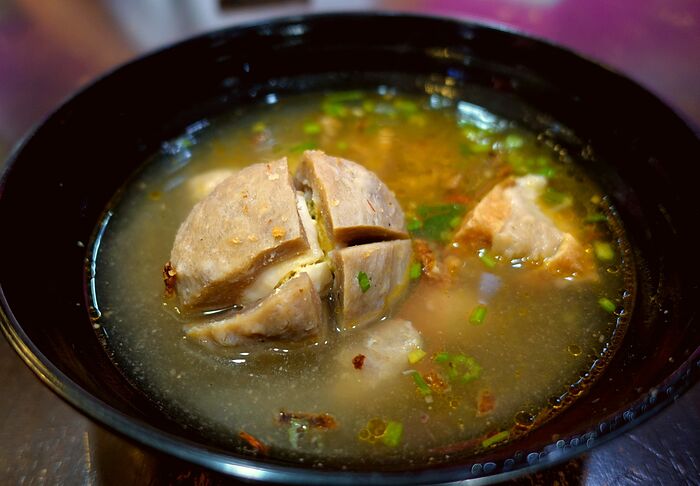 The version here is very tasty, and intense beef-chicken broth. The bowl also contained smaller beef balls on the side, a tofu puff stuffed with minced beef, and small, bony pieces of chopped soy-braised chicken, then topped off with chopped scallions & shallots. 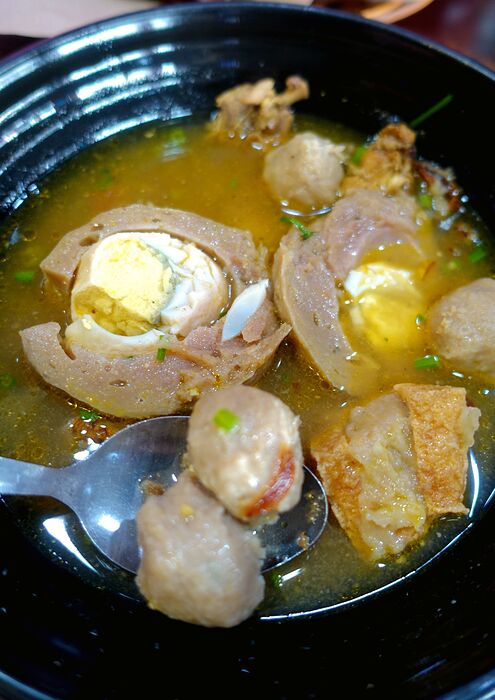 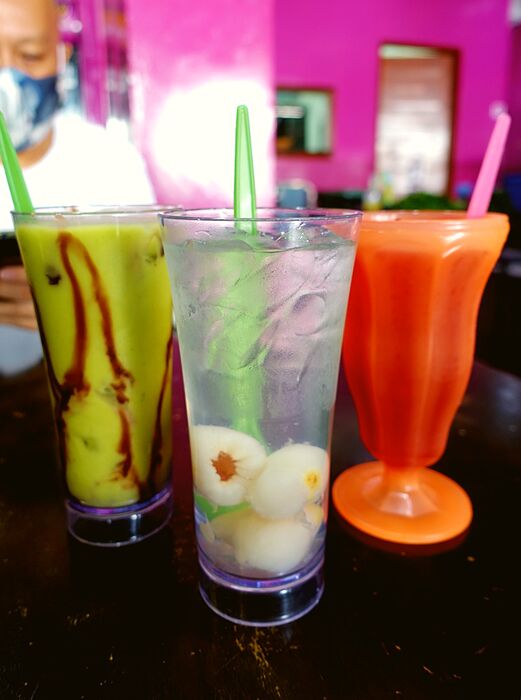 Dishing out the meatball soup options: 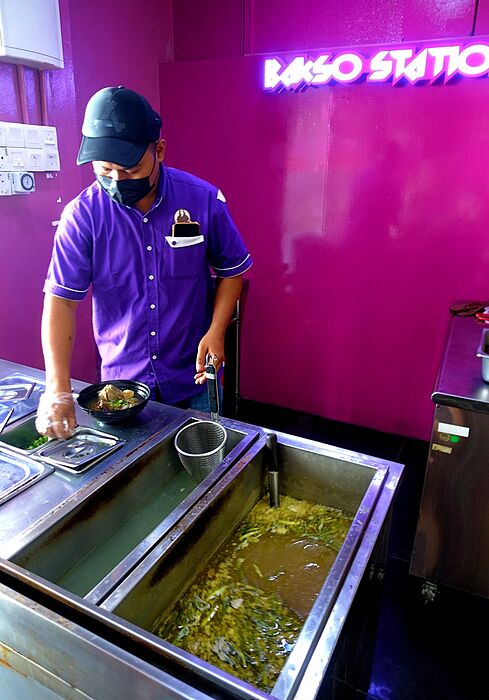 Meatballs of various shapes and sizes. Indonesian meatballs tend to be rather hard & chewy, as their recipes called for tendon & other parts of the animals to be minced with the meat, and with copious amounts of cornstarch added to the mix. If your meatballs don’t turn out tough and rubbery/bouncy, then it’s NOT authentically-Indonesian! 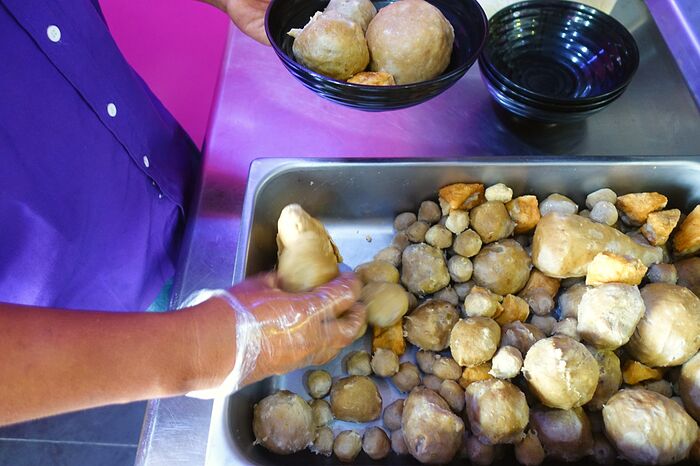 I had a culture shock when I had my first Indonesian “bakso” - in Jakarta back in 1997. I’d sworn it’ll be the last time I am having one. Turned out, I’d gotten used to it, but won’t order it out of choice. I want my meatballs to actually taste of meat! 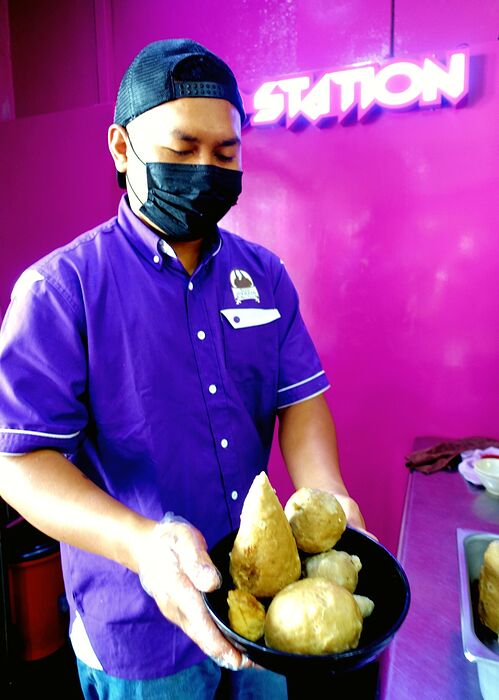 I’m usually envious of your meals, Peter, but this one just didnt do it for me.

I can understand that.

It’s a sort of once in a lifetime meal for me, too.

a dollop of immolate-your-own-tongue chili paste

That is a hilarious and frightening description.

That is a hilarious and frightening description.

I had to think of something which aptly describe that moment when you realised how bad it was, and you had to force yourself to swallow it.

The chilli in Indonesian food is perhaps the hottest I’ve ever come across.

I recall my first rijstaffel in Amsterdam. We were advised on the order in which to eat the various dishes - “Start here and eat clockwise. The last one is very hot”.

“Very hot” was an understatement. It was a good hour later, back at the hotel, when feeling returned to my mouth.

The chilli in Indonesian food is perhaps the hottest I’ve ever come across.

Koreans love their spice, but for me, Thai food takes the cake. And I gladly submit to the pain.