𝗛𝘂𝗮𝘁 𝗸𝘂𝗲𝗵 is a traditional Southern Chinese steamed glutinous rice flour cake used for prayer offerings and also as gift to family & friends. “Huat” means “to grow” in Hokkien/Fujianese dialect, but it also sounds like “to prosper”, hence the auspiciousness attached to 𝗵𝘂𝗮𝘁 𝗸𝘂𝗲𝗵. 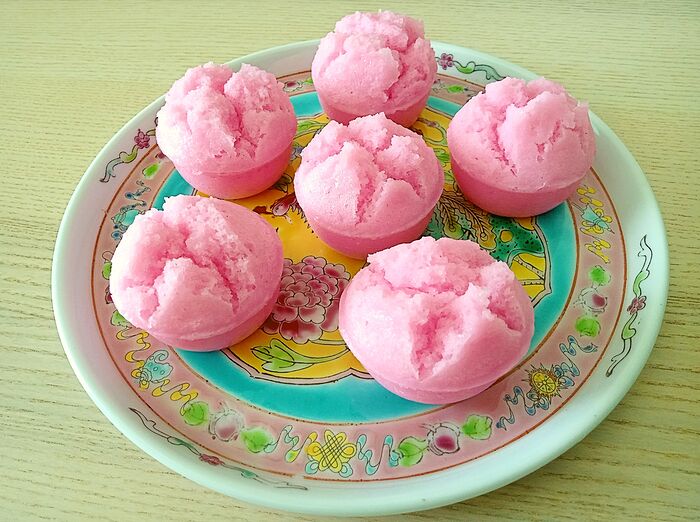 The kueh is characterised by its signature “bloom” on top: a higher bloom indicates greater prosperity in the future. 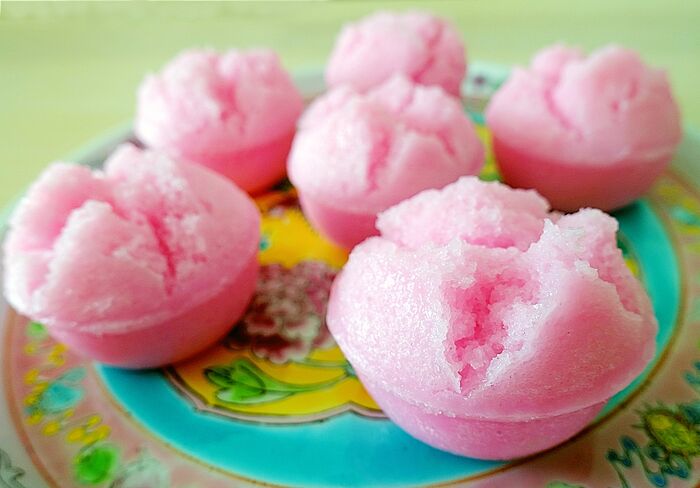 𝗛𝘂𝗮𝘁 𝗸𝘂𝗲𝗵 is believed to have originated from Longyou County in Zhejiang Province, about 500 km north of Fuzhou, the capital of Fujian Province (majority of the Chinese populace of Penang and Singapore descended from Fujianese immigrants who came to Southeast Asia in the 19th-century). 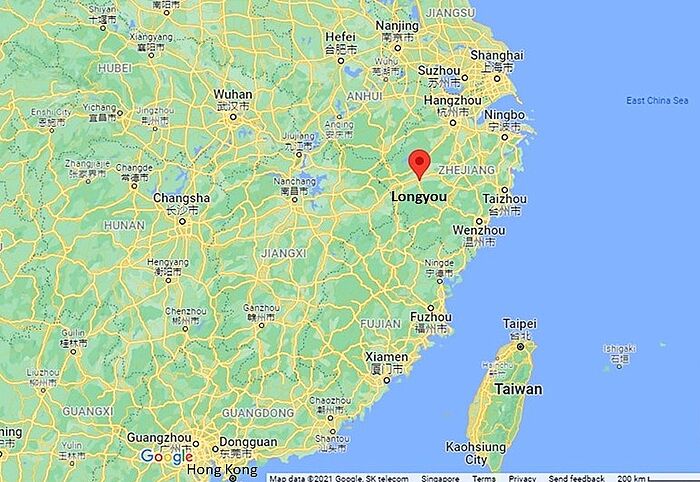 Longyou 𝗳𝗮 𝗴𝗮𝗼 (龙游发糕) cakes have a recorded history of over 1,000 years, stretching back to the Song Dynasty (960-1279 AD). The 𝗳𝗮 𝗴𝗮𝗼 were originally made by farmers using leftover rice grains for their own consumption. Subsequently, the 𝗳𝗮 𝗴𝗮𝗼 were used as prayer offerings to the gods, giving thanks for bountiful harvests.

According to the Longyou County Chronicles, around 600 years ago, Ming Dynasty (1368-1644 AD) people regarded 𝗳𝗮 𝗴𝗮𝗼 as an auspicious cake, and often used as gifts for relatives and friends, especially during the New Year or holiday periods.

Today, in Malaysia and Singapore, the Hokkiens and also Baba-Nyonyas will use 𝗵𝘂𝗮𝘁 𝗸𝘂𝗲𝗵 as prayer offerings during auspicious occasions – with the pink colour of the 𝗵𝘂𝗮𝘁 𝗸𝘂𝗲𝗵 symbolizing joyous celebration. 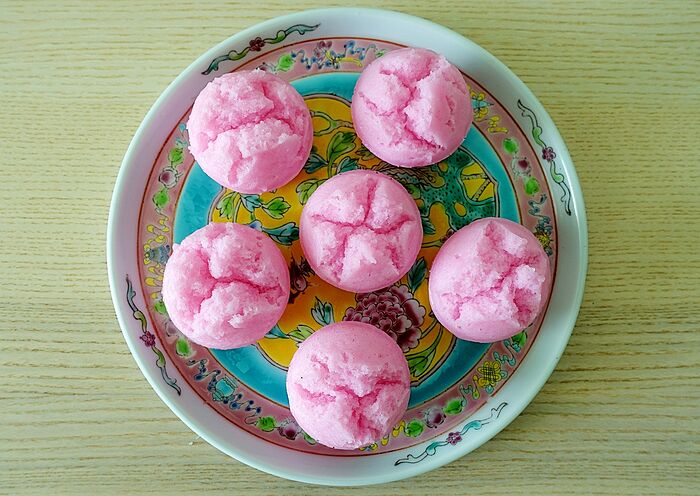 I bought my 𝗵𝘂𝗮𝘁 𝗸𝘂𝗲𝗵 this morning from Eaton, a popular Chinese bakery on Batu Lanchang Road. This was in preparation for the upcoming Eighth Lunar Month on the Chinese calendar, which will fall on 7 Sep (next Tue). Tomorrow, Monday, 6 Sep, will be the last day of the Chinese Hungry Ghosts Month (or Seventh Lunar Month).

My stay-home Sunday morning breakfast were take-outs from Eaton. The bakery-kitchen is famous throughout Penang for these two items:

In China, various types of sweetmeats are used for the one-month-old-baby’s celebration. The practice is the same in different parts of China, but the types of foodstuff used will be different, depending on each province’s culinary tradition. In Fujian province, glutinous rice flavored with soy sauce, chicken, mushrooms and sausages, is one of the food items served during the baby’s one-month-old celebration.

Here in Penang, the Straits-born Chinese who descended from Fujian, but who have lived here since the 19th-century, have co-opted the traditional Malay/Indonesian ritual/celebration food: nasi kunyit - steamed glutinous rice, tinted yellow with fresh turmeric and flavored with coconut milk as a substitute for the Fujianese brown-hued glutinous rice used in their old homeland. 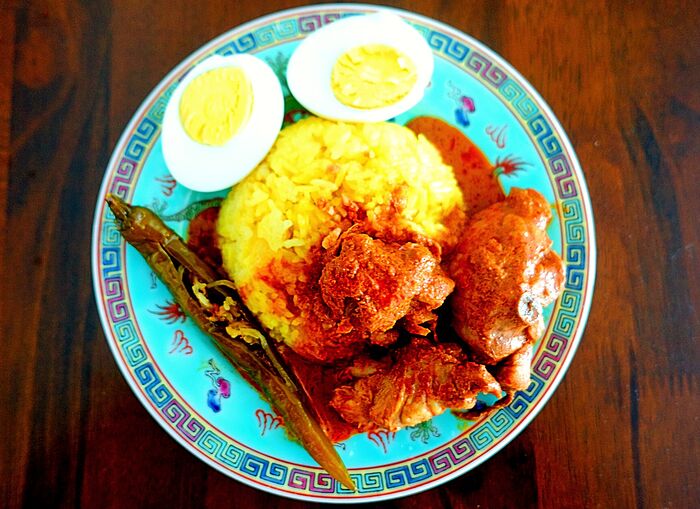 I liked to add a hard-boiled egg to my nasi kunyit & chicken curry. For this Sunday morning breakfast, I also had a Eurasian pickled green chili, stuffed with finely-shredded raw papaya. 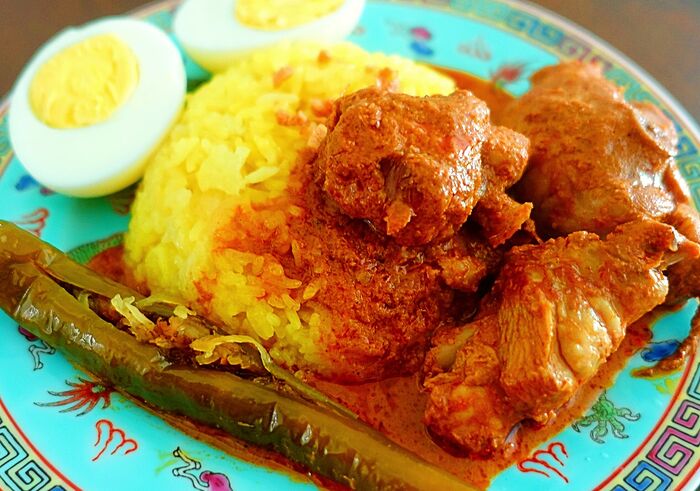 In a nod to its local Nyonya heritage, Eaton also offers a green-colored version of the kueh, called"cheh ku" (green tortoise) in Penang, and “kueh ku hijau” by the Peranakan-Babas & Nyonyas in Malacca and Singapore. These would have “inti” (shredded coconut -palm sugar) filling. 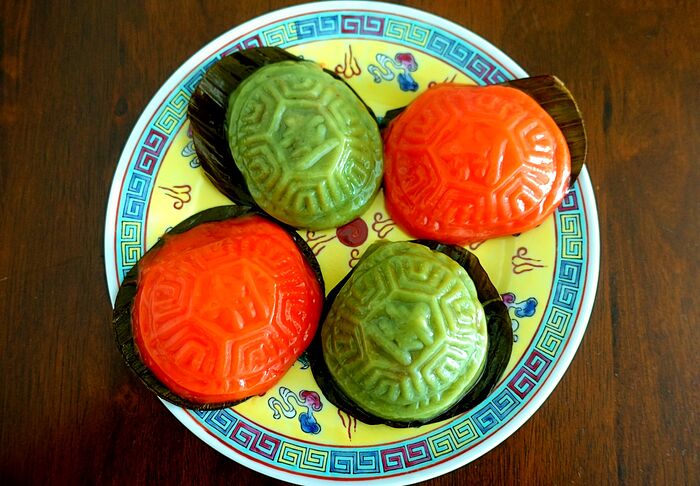 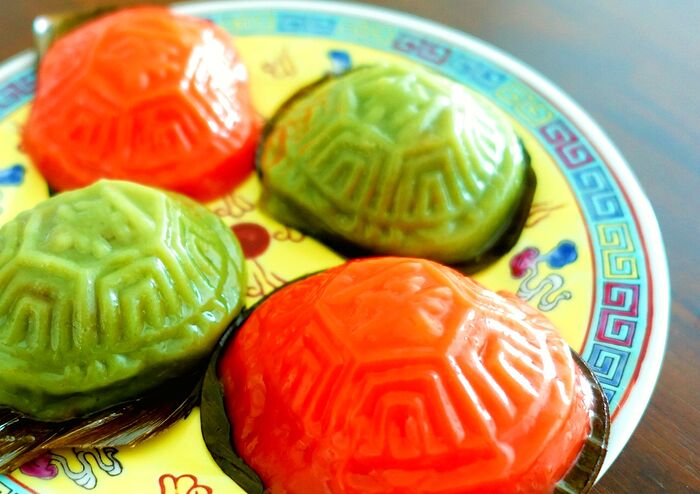 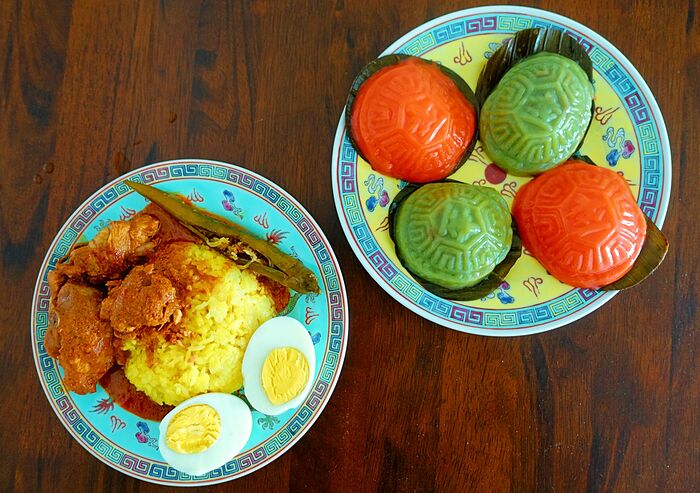