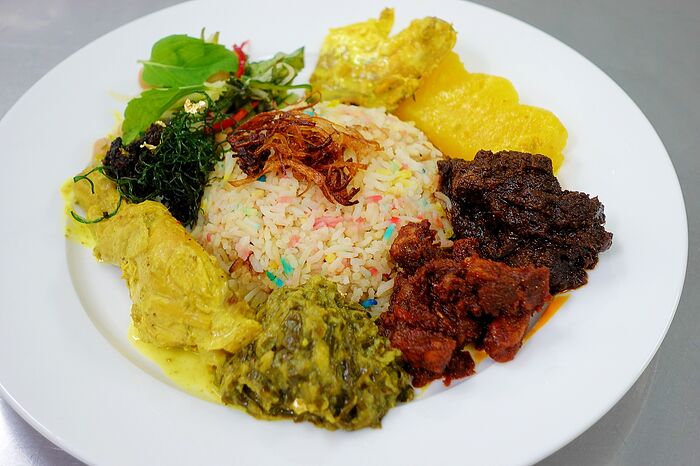 What an incredible spread!

Lontong dengan kuah kacang - compressed rice cakes, drenched in a lightly-spiced, coconut milk-enriched gravy, topped with spiced peanut sauce.
This was delicious. Maybe they shouldn’t have served this first - by the time I finished this substantial soup/stew dish, I was already done!

But there were 8 more courses (not including desserts) to follow! 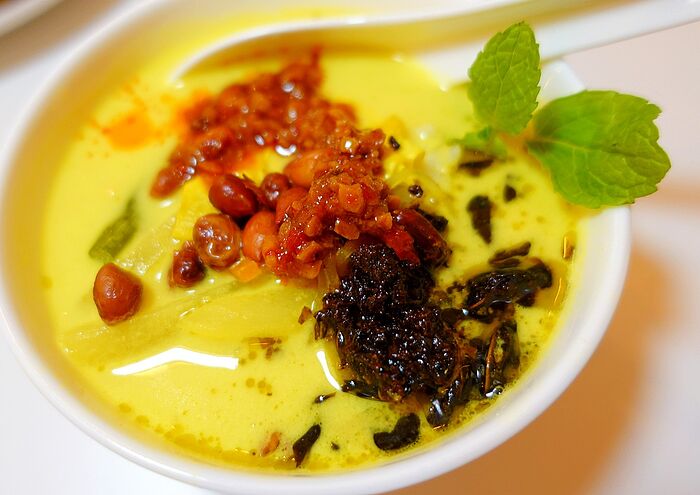 Rendang daging Palembang (Palembang-style beef rendang) - this dish was a revelation: slow-cooked beef shank, in a complex spice mixture heavy on cumin and coriander. The beef was cooked till fork-tender. When it’s served, red-hued oil would seep out from the mound of dark, spiced beef - the presence of that red puddle of oil is the mark of a good rendang. We don’t often see that outside of Sumateran cooking, where this dish originated from, and where its preparation has been heightened to almost an art-form. 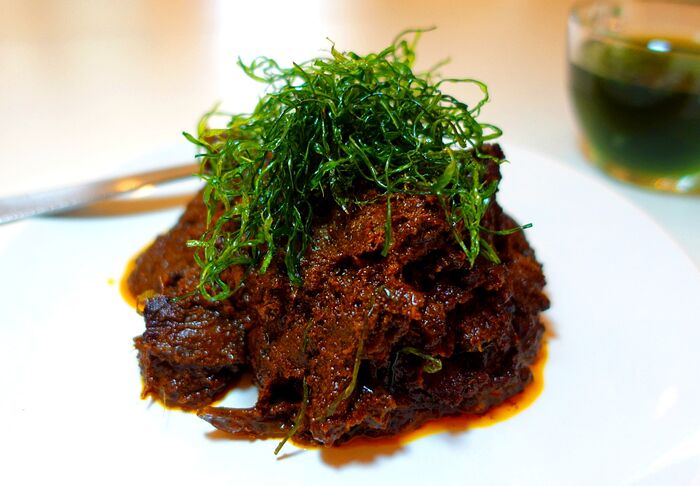 Rendang pucuk ubi (sweet potato shoots rendang) - the sweet potato shoots used are the older, more fibrous sort, in order to withstand the long, slow-cooking inherent in rendang preparation. It resulted in a somewhat “vegetarian” version of a rendang: so toothsome and full of flavours, one hardly realised it’s an all-vegetable concoction. Salad ulam (chickpeas and herbs salad) - this is a “Rosemah Ibrahim” original, where she paired chickpeas - common in Middle-Eastern cooking (which the Malays respect), but virtually non-existent in Malay food culture - with a bouquet of Malay aromatic herbs. The result was an alien-looking dish from a Malay perspective, yet possessing all the nuances of a traditional Malay “ulam”/aromatic salad. Masak lemak ayam lada hitam (black pepper chicken curry) - Rosemah Ibrahim’s cooking is highly-influenced by her Sumateran heritage, and one can see that from the predominantly yellow hue of her curries, rather than the redder ones from other regional Malay cooking styles.
For this dish, Rosemah first marinated and cooked the chicken with black pepper, before immersing the spiced chicken pieces in her trademark turmeric-scented, coconut milk-enriched gravy.

Fresh stalks of crushed lemongrass, and with pieces of “asam Gelugor” (dried tamarind fruit) to lend a stab of sourness to undercut the richness of the milky gravy. 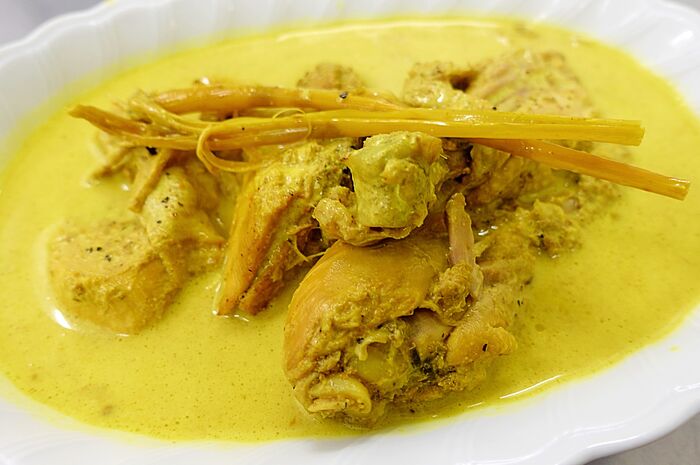 Tempe ikan asin (tempe/soybean cake with salted fish) - this dry-cooked dish combines the nutty tempe (fermented soy bean cakes) with chopped pieces of boneless salted fish.
I must admit that the dish was way saltier than I’d have liked. The heavy spices muted the pungency of both the tempe and the salted fish somewhat, but this was a love-it-or-hate-it dish. I am a fence-seater here. One needs to eat this with steamed plain white rice. 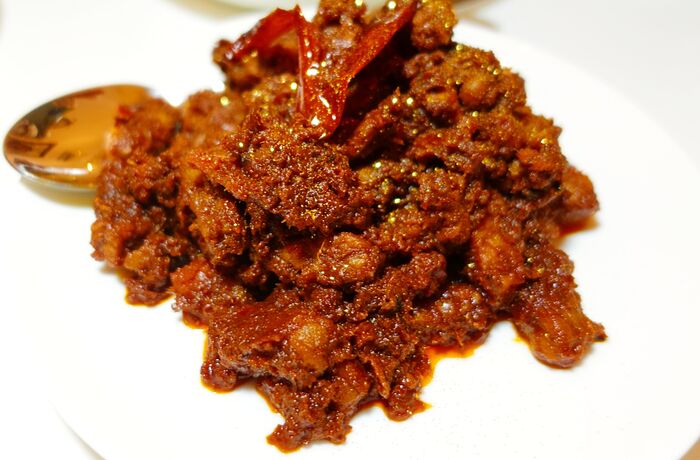 Masak lemak nenas ikan asin (pineapple & salted fish curry) - another aggressively-flavoured dish: this one paired the sour-sweetness of pineapple with the salted fish head.
The usual turmeric-coconut milk gravy somewhat soothed the extreme flavours emanating from the other ingredients. Again, one needs to consume this with steamed rice, in order to temper saltiness and sourness of the dish. 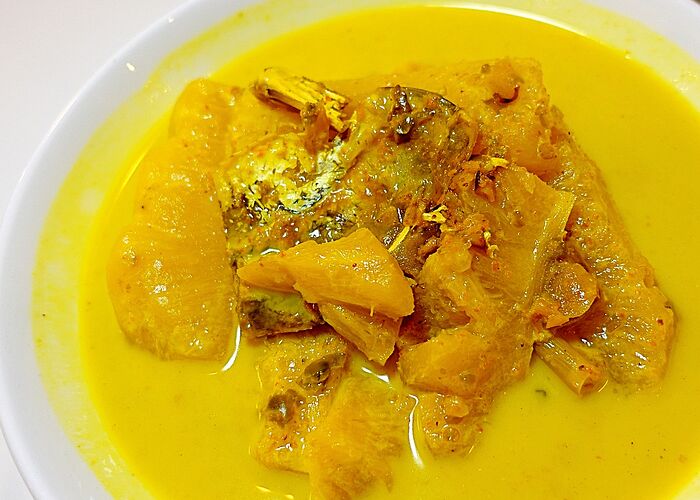 Tempoyak daun ubi kayu (cassava leaves with fermented durian) - I pride myself in being able to eat “almost” everything.
This dish reminded me why I said “almost”.
Tempoyak is fermented durian. Whilst I am a hardcore durian fan, and consumed copious amounts of the fruit durian every day the recent durian season, the “tempoyak” sends me into death throes at a mere whiff of it.
Fermented durian smells and tastes the way you’d expect something putrid and decaying to be. So, sorry, but I didn’t taste this dish here this evening. Masak lemak cili api jangek/kulit lembu (Cow-skin & bird’s eye chili curry) - this was a very Sumateran dish, the cow-skin having been boiled till soft and almost gelatinous.
To the Chinese, I’d describe the texture as akin to braised sea cucumber. To the Westerners, I guess the closest would be thick cuts of pork-fat. The yellow curry here is spiked with explosive, little bird’s eye chilis. 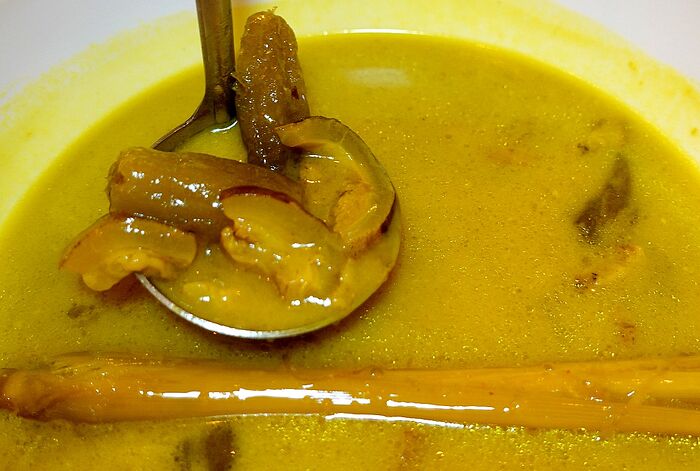 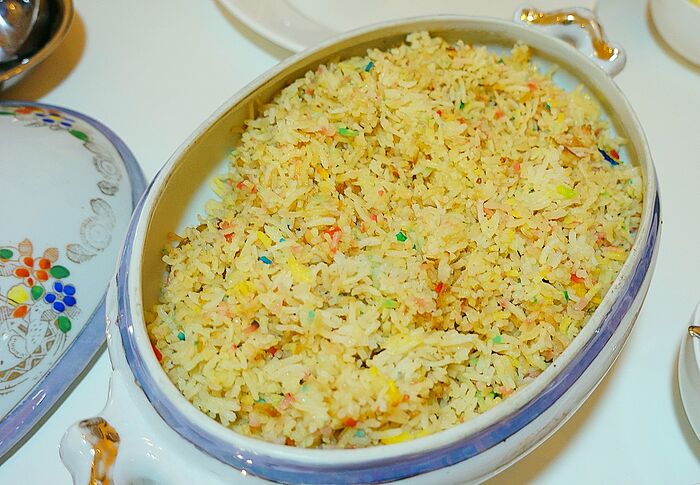 Kak Rosemah Ibrahim’s cooking gave us a taste of the complexities of spice blends used in “actual” Malay cooking (as opposed to concatenated, highly-commercialised ones that we encounter all over Malaysia nowadays), and how gentle, patient cooking could coax flavours out of the many simple but fresh ingredients used.

She was amazingly meticulous and a stickler for perfection. We were lucky indeed, as she is based near Kuala Lumpur, and had only two special private dinners held in Penang last weekend.

Curious how much this kind of celebrity chef prix fixe dinner costs in Penang?

Curious how much this kind of celebrity chef prix fixe dinner costs in Penang?

Usually around MYR200 (US$45) to MYR300 (US$67) per head. It costs much less to dine well in Penang, compared to Kuala Lumpur, where the price can be double.

I’m a big fan of durian. I’m not sure that fermenting it is entirely necessary given how funky it is anyway. Though probably began as a preservation thing, rather than a flavour thing.

A great looking spread. An absolute bargain at those prices.

What a beautiful feast! The black pepper chicken with turmeric looks outstanding! And the beef Rendang looks like it is a great dish too!
I have never heard of fermented durian. That is doubling down on your olfactory experience! I once ordered Assam Laksa in a small village in the Cameron Highlands. The owner kind of tried to wave me off because his version was a really sour one, but I had heard it was good so I ordered it anyway.
MAN! Can a dish really light you up! I had had Assam Laksa before and liked the kind of sour flavor, this one was so sour that I couldn’t taste much else. Even with the almost pungent flavor, the dish really was good, though. The owner had heaped a bunch of freshly cooked noodles on top to cut the sour a bit but it was still enough to cross my eyes. I finished almost every drop and thanked the owner with a deep Thai wai (maybe not a local custom but he understood the intent) and he seemed happy that I enjoyed it.
Fermented durian, though, might be a bridge too far.

I finished almost every drop and thanked the owner with a deep Thai wai (maybe not a local custom but he understood the intent) and he seemed happy that I enjoyed it.

I salute you for your adventurism - not many foreigners can take to asam laksa. Even I try to avoid it if I can, when I’m in any local food court or hawker centre.

Fermented durian, though, might be a bridge too far.

It is as scary as it sounds!

How popular is fermented durian in Malaysia, Sumatra, other durian -eating regions?

Admittedly, not very popular, nor common at all.

In Penang, it’s quite rare to find this condiment. I’d only tasted tempoyak/fermented durian dishes during my time working/living in Kuala Lumpur back in 2011 to 2017.
In Singapore, it’s virtually nonexistent.