Kong Thai Lai was founded back in 1920 by the Hainanese coffee-brewing Tan family. Back on 26 Sep 2016, the old coffeeshop moved from its original Hutton Lane location to its present premises on 38 Leith Street. Tan Jeng Seow, the grandson of the founder, now runs the popular little coffeeshop. 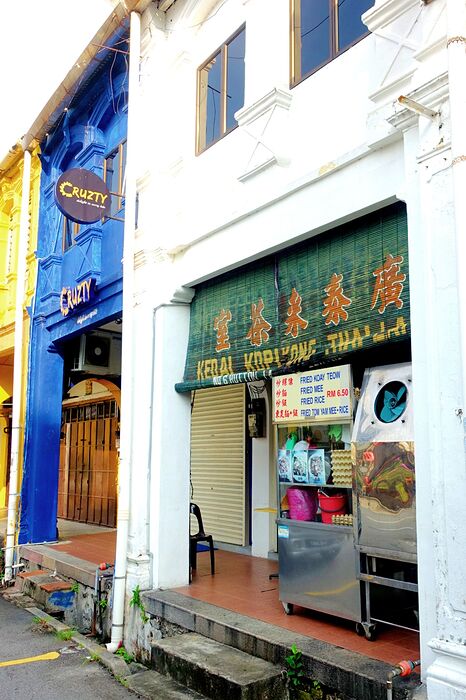 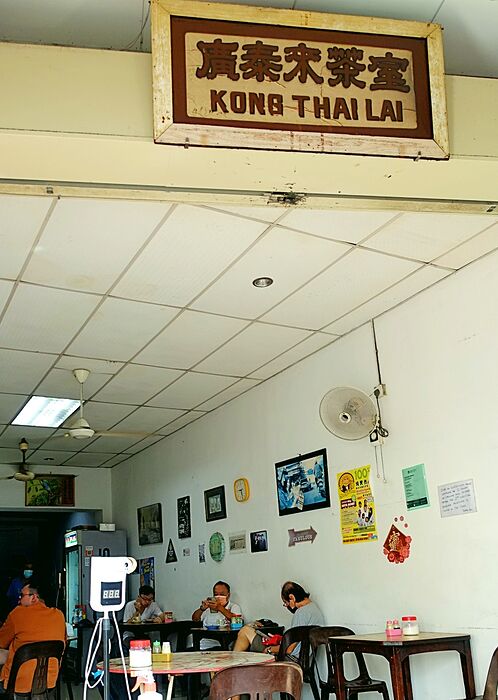 Their offerings remained much the same: Hainanese-style freshly-brewed coffee, accompanied by kaya-butter toasts and soft-boiled eggs - which was what we had for breakfast this morning: 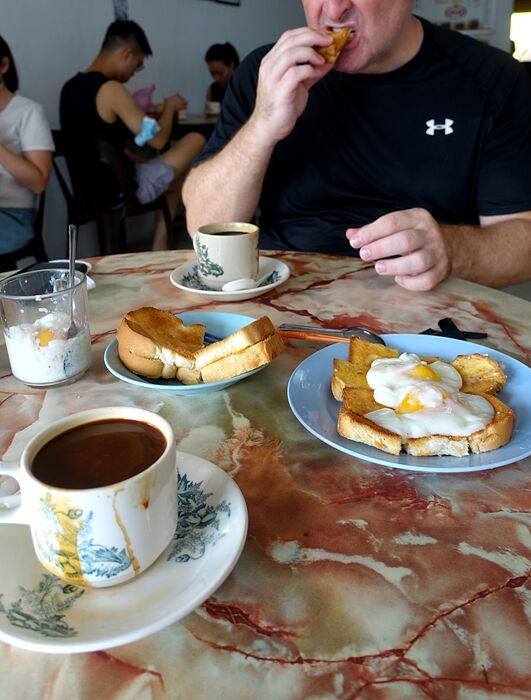 Hainanese coffee is brewed from freshly-roasted coffee beans. The Hainanese usually roasts a mix of coffee beans (50%) with sugar (40%) & butter (10%). The sugar with caramelize and coat the beans, which are then allowed to cool down before being ground for brewing. 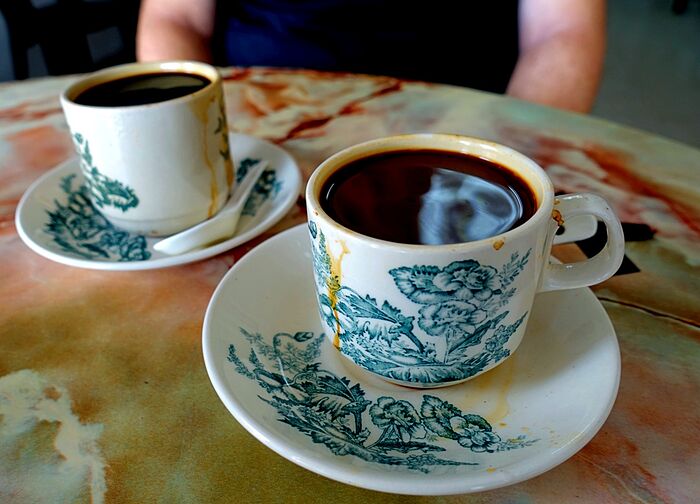 Hainanese-style toasts are made from thick-cut Roti Benggali, slathered with a thin spread of kaya (coconut-egg jam) and butter. 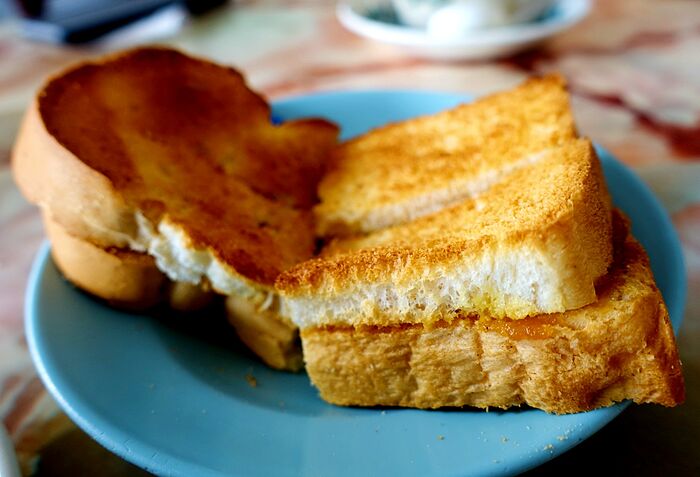 Soft-boiled eggs are another standard order for a full-fledged Hainanese coffee-and-roast breakfast, and some customers would actually dunk their toasts into eggs, somewhat akin to British eggs & soldiers, which was probably where this breakfast option originated. 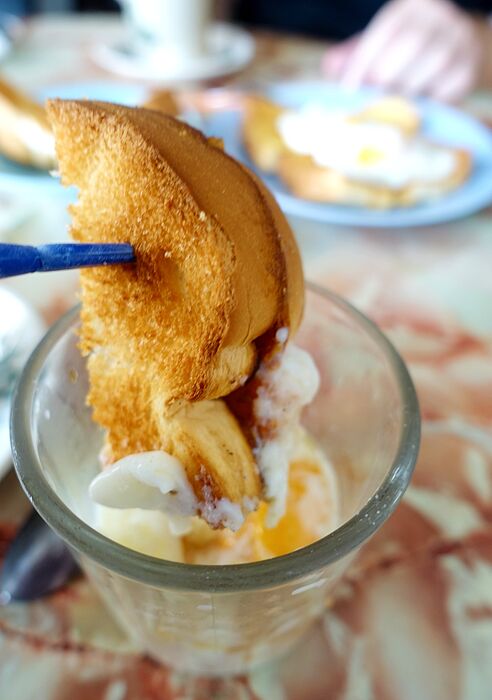 A new, popular way of serving was having the soft-boiled (not poached) eggs cracked on top of buttered toast. 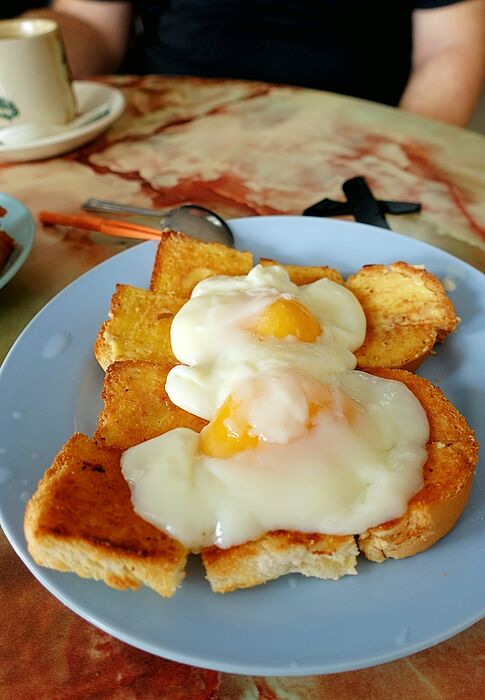 Kong Thai Lai’s offerings are simple, and there are probably a number of places which do it better than them. But there is no beating history, and its illustrious past made the little coffeeshop a magnet for local coffee connoisseurs. This place used to be the favorite breakfast spot for one of Penang’s most famous and enigmatic tycoons, the late Loh Boon Siew aka Mr Honda, who’d have a regular table here for his daily morning cuppa. 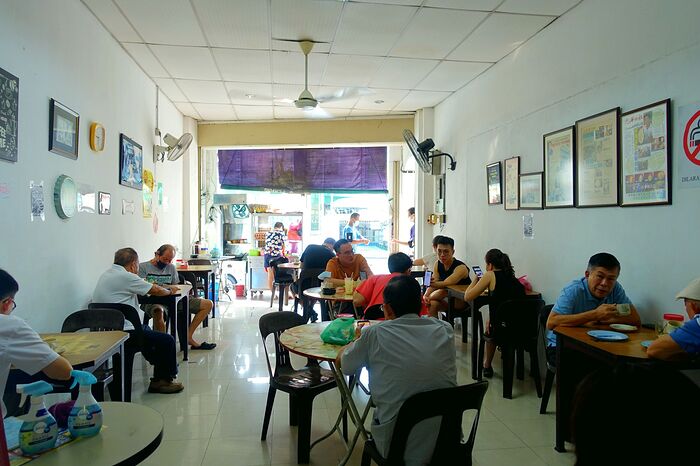 On 26 Sep 2016, the third-generation owner of 𝙆𝙤𝙣𝙜 𝙏𝙝𝙖𝙞 𝙇𝙖𝙞, Tan Jeng Seow, moved his traditional Hainanese kopitiam from its century-old location on No. 6 Hutton Lane to 38, Leith Street.

Now, after just a bit over 6 years, it’s another move for 𝙆𝙤𝙣𝙜 𝙏𝙝𝙖𝙞 𝙇𝙖𝙞 - this time, it shifted premises to 32 Dickens Street, on 3 Oct 2022. Its original blinds, which still bore the first address - No. 6 Hutton Lane - is now installed at its new location. 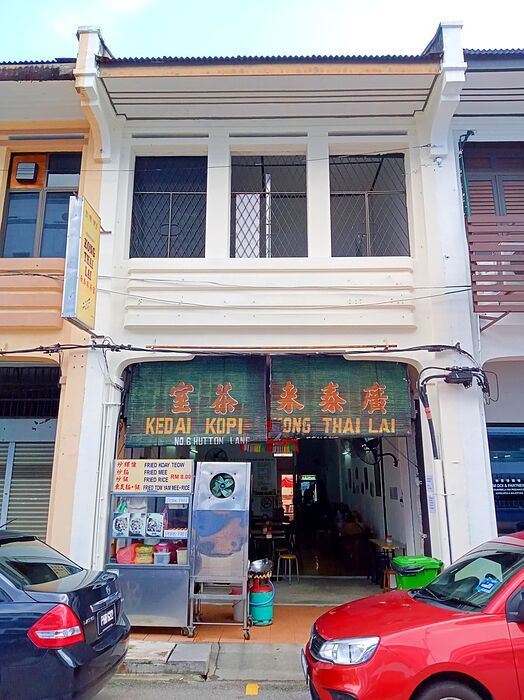 Its new home on Dickens Street is in a more pleasant downtown neighbourhood location: facing the Penang Police HQ. 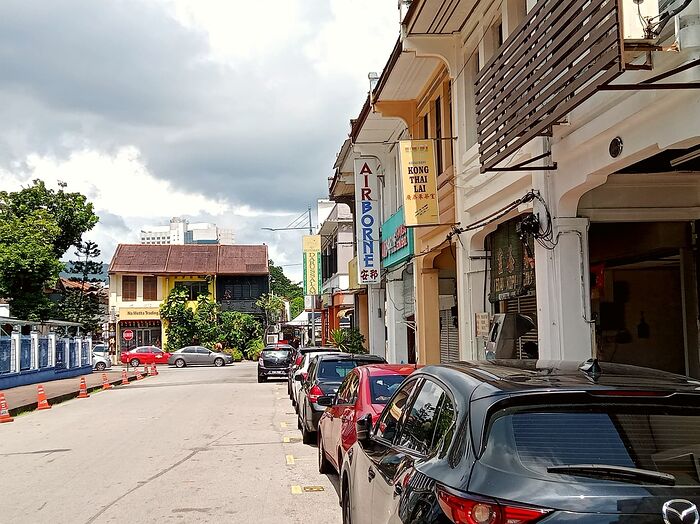 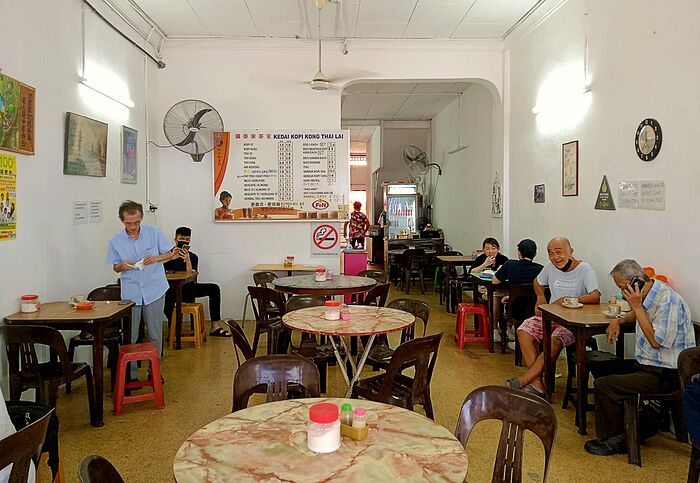 𝙆𝙤𝙣𝙜 𝙏𝙝𝙖𝙞 𝙇𝙖𝙞 still brews some of the best Hainanese coffee in town, which it serves alongside traditional toasts slathered with butter and kaya (coconut milk-egg-sugar) jam. 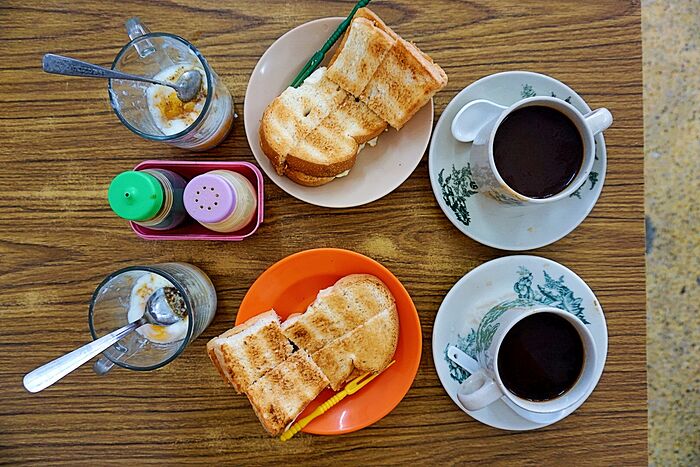 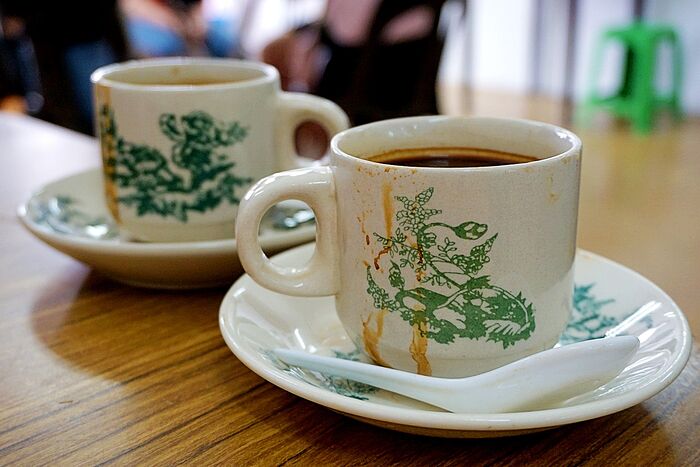 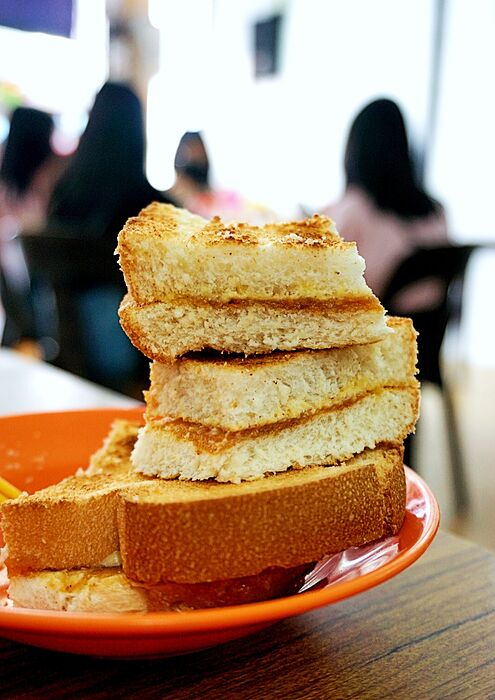 A traditional Hainanese breakfast also usually includes soft-boiled eggs, served alongside buttered toasts - an adaptation of the British eggs-and-soldiers by the Hainanese. 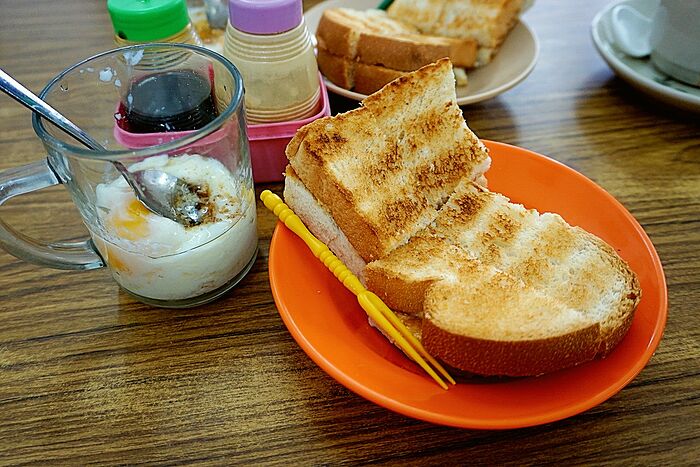 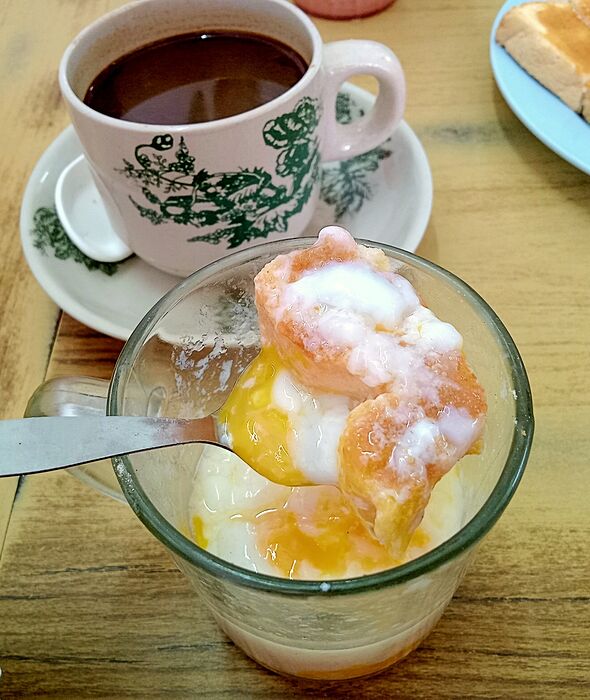 Dickens Street was named after John Dickens, a British magistrate who served in George Town from 1801 to 1805.

Hi! i’m heading to Penang for the first time soon, and so i’ve been trying to catch up on your delicious posts on this board! I’m quite excited to experience this city. If you don’t mind answering a couple of direct recommendation requests :

apart from the coffee shop above, do you recommend any Hainanese/Malay Kopi shops particularly known for their quality of coffee? Maybe even a place that is a built-in roasterie?

Any recommendations for ‘upscale’ Malay? I’m more interested in the traditional eating-houses & street foods, but will allocate a meal for something kinda nice

[DSC01326] Lunch today was at Irama Dining, a two-month-old Malay fine dining restaurant on the second-floor of the retro Penang Chinese Chamber of Commerce building. [DSC01266] Lovely dining space, dominated by a striking mural of a traditionally-clad Malay dancer, painted by local artist, Mandy Maung: [DSC01273] Malays are Muslims, so a Malay restaurant, being halal, do not serve any alcoholic drinks. We started off with some chilled Sirap Selasi - rose syrup, scented with pandanus lea…

Many thanks for the recommendations! Looks lovely.

Hi, just following up after the Penang visit. Irama was fantastic! thanks again for the recommendations. Penang/Georgetown overall was a great experience & destination; truly one of the best ‘chowhounding’ destinations around.

Thanks so much for reporting back, @pushslice . So glad you enjoyed yourselves!