I was walking along Cintra Street, George Town’s old Cantonese quarter, this morning when I came across this little shop with a trio of middle-aged women huddled over a mound of pastry dough and a large vat of bubbling hot oil. “We’re making ‘yau char kwai’ (deep-fried devils)”, quipped one of them, as she used her over-sized pair of chopsticks to roll the elongated sticks of dough bobbing on the surface of the hot oil. 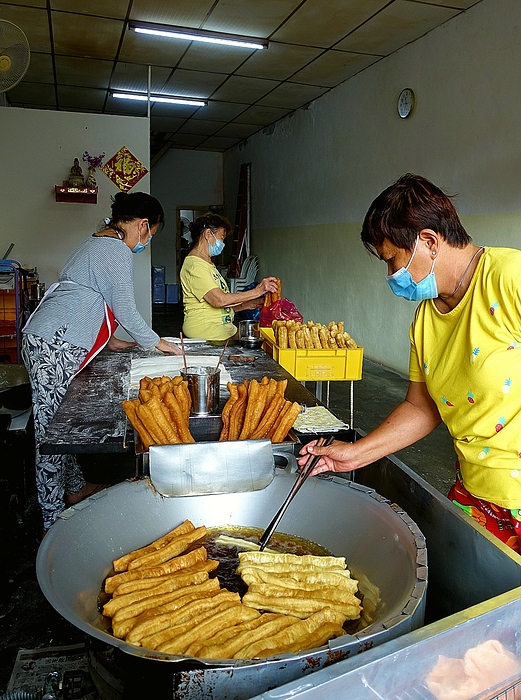 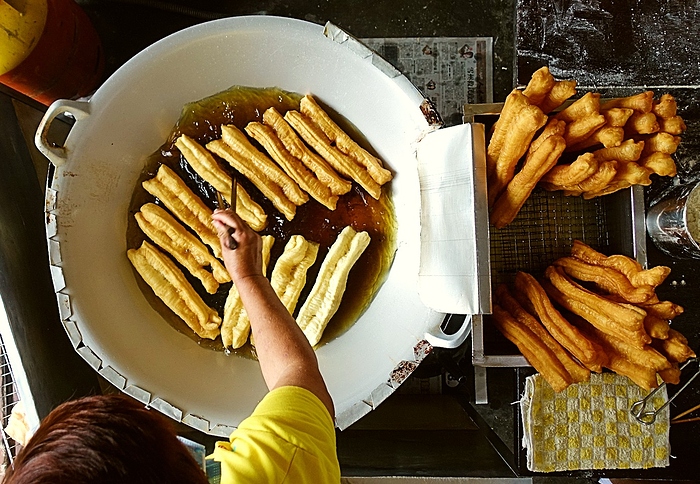 The crisp, deep-fried Chinese crullers called “eu char koay” (油炸粿) in Penang is a popular breakfast snack. Many people also liked to dunk their “eu char koay” into a hot cup of coffee. 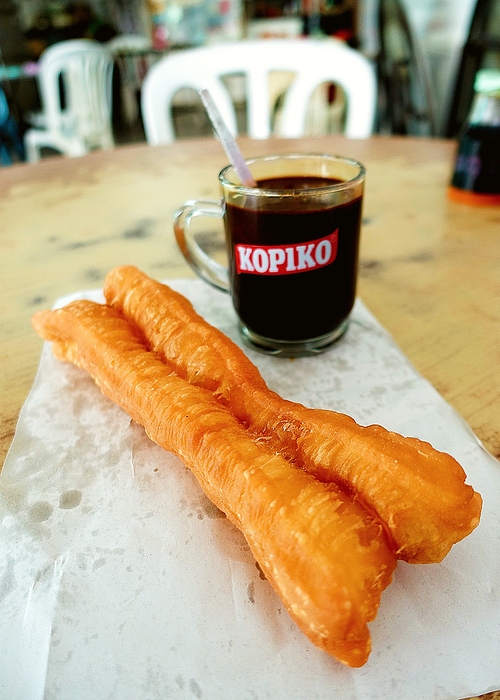 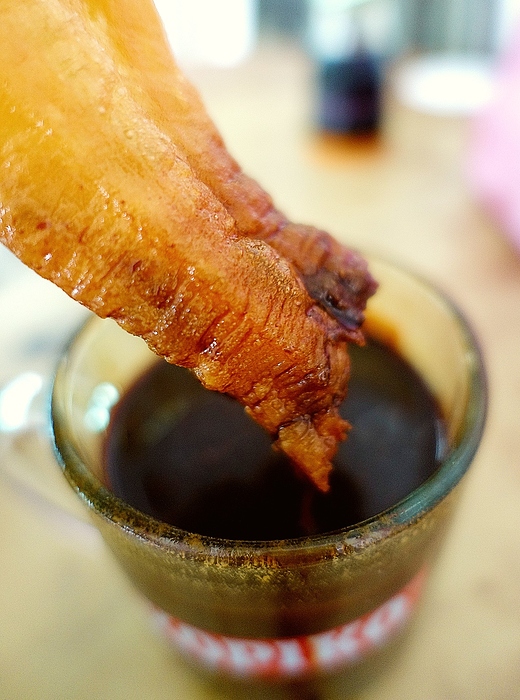 This traditional Chinese snack has a long history. Known in Mandarin as “yu tiao” (油條), and in Cantonese as “yau char kwai” (油炸鬼), the “eu char koay” was said to represent the corrupt, manipulative 12th-century Song dynasty official, Qin Hui, and his equally scheming wife, Lady Wang, who were vilified throughout Chinese history for their part in plotting against patriotic Song general Yue Fei, an icon of patriotism in Chinese culture. The general was imprisoned and later executed in prison under false charges trumped up by the evil duo.

The “eu char koay”, hence, consisted of two pieces of conjoined dough, representing Qin Hui and Lady Wang, and they were “deep-fried” to show the people’s contempt for the couple. Whilst the Hokkien term “eu char koay”/”油炸粿” translates to “deep-fried pastry”, the Cantonese are less-forgiving, as “yau char kwai”/”油炸鬼” meant “deep-fried devils”. 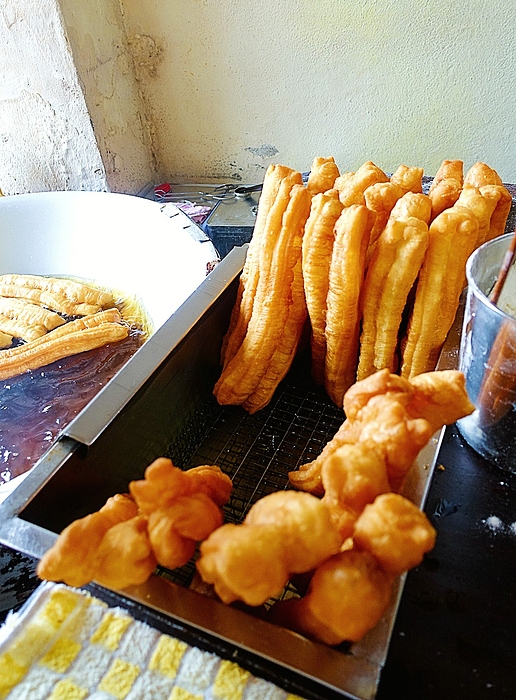 In Penang, the best “eu char koay” I’d ever had can be gotten from this little shop on 76 Cintra Street run by the 3 women. The owner, Madam Chow Siew Ying, learnt her trade from her Cantonese father over 50 years ago. Delicately kneading her flour-egg-milk-and-water dough by hand, and gluing two pieces together with water to form a pair, she’d gently stretch each paired dough over hot, boiling oil. 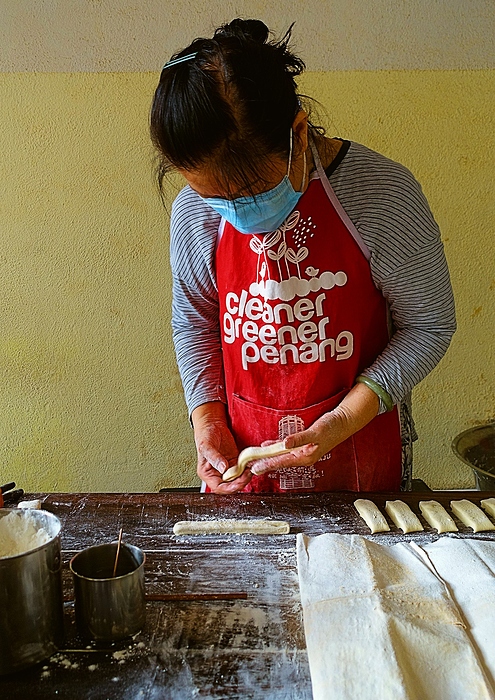 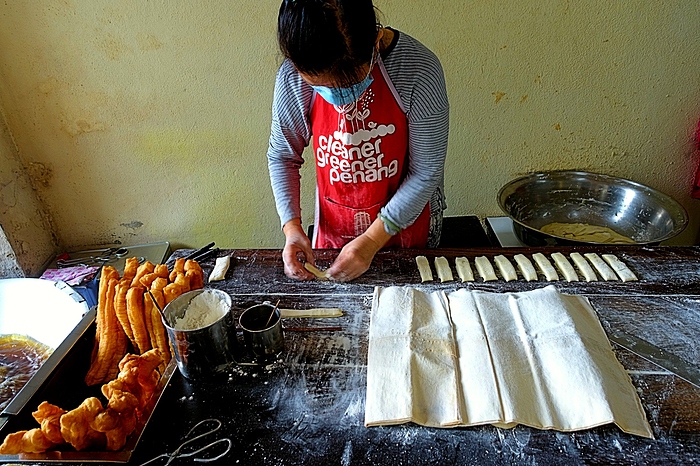 The second lady would take over from there, using her giant chopsticks to prod the pastries bobbing on the hot oil, rolling them to ensure they brown evenly on all sides. 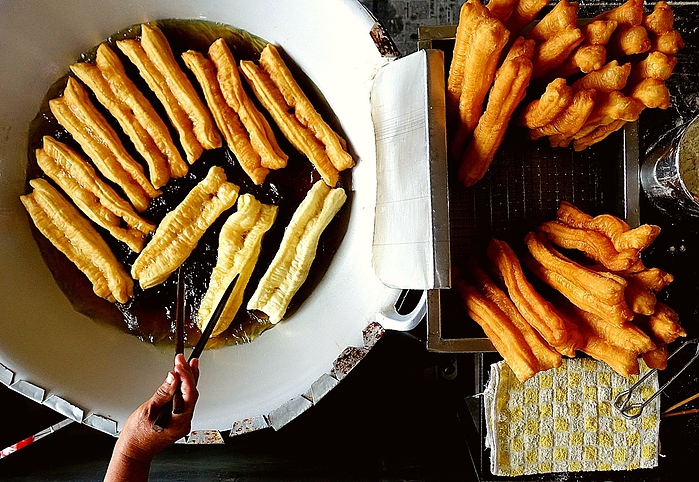 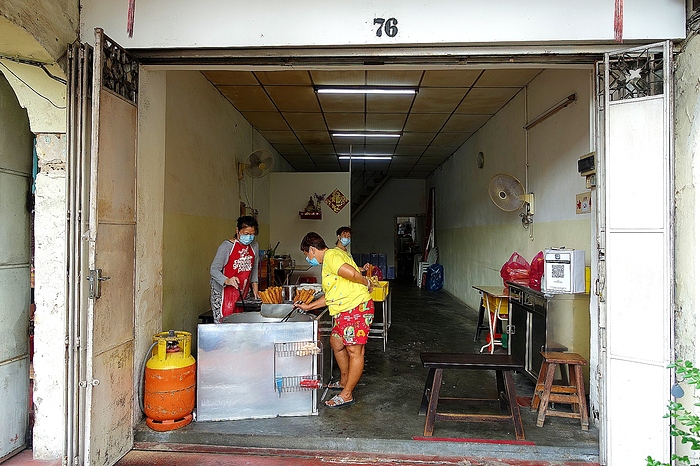 A third member of this trio of ladies would carefully wrap the crispy dough-sticks in paper, making sure they don’t bend or break, before placing them inside carry bags. The “eu char koay” from this legendary shop stays crisp for quite a bit, and has a delicious crunch.

Interesting background story. I like the way the Cantonese choose to teach a lesson or remind people.

I didn’t know they could be dunked in coffee.

The “eu char koay”, hence, consisted of two pieces of conjoined dough, representing Qin Hui and Lady Wang, and they were “deep-fried” to show the people’s desire for revenge against the couple.

Thanks for the history. Deep fried them, not bad! Haha, that starts to give me ideas to create new form of food to protest!!

I missed eu char koay though!

I didn’t know they could be dunked in coffee.

Oh yes! In Singapore and Malaysia, the de rigeur is to dunk the “yau char kwai” in coffee, milk tea or some strong beverage.

The Taiwanese-style cafes in Singapore would serve them with soybean milk or douhua instead.

In Bangkok, locals would have it with sangkaya coconut custard dip, or with sweetened condensed milk!

Deep fried them, not bad! Haha, that starts to give me ideas to create new form of food to protest!! 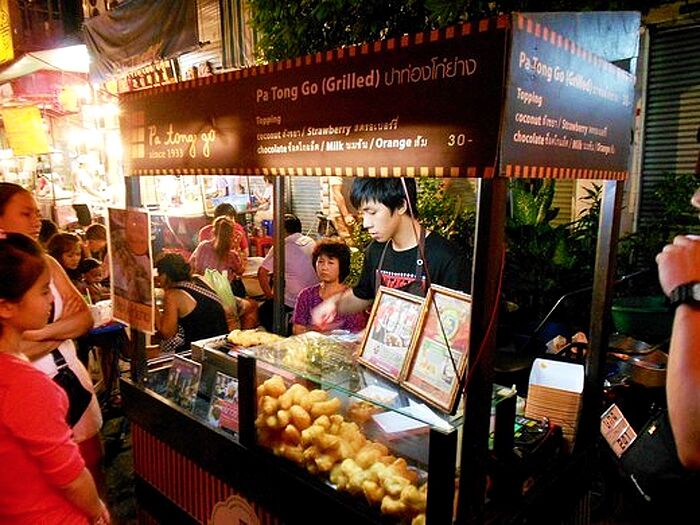 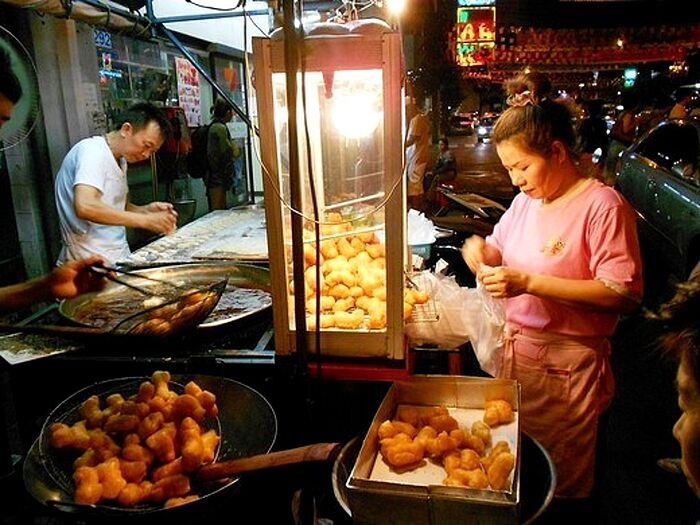 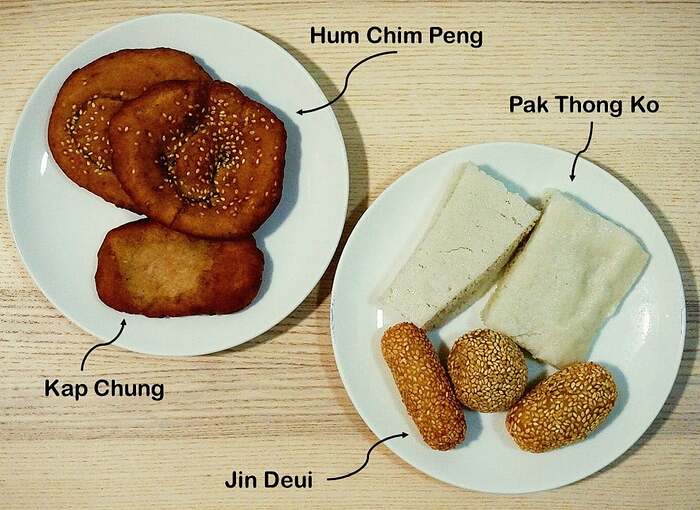 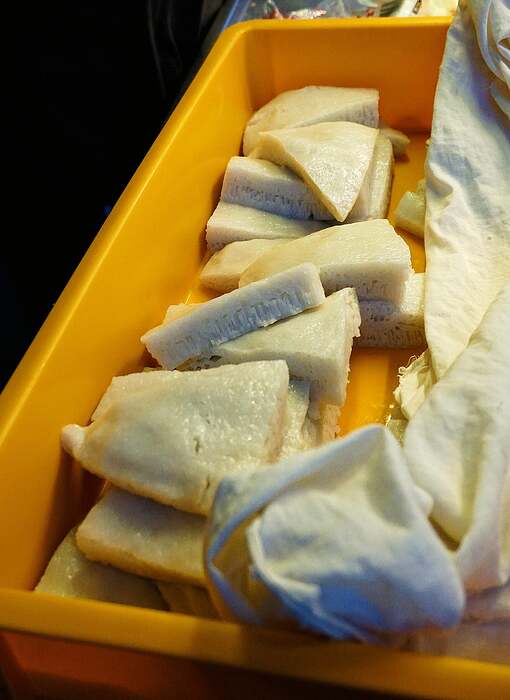 The Teochews come from Swatow (Mandarin: Shantou) district in Guangdong Province, and constitutes the largest Chinese dialect group in Thailand, Vietnam, the Philippines and Indonesia.

In Singapore, the Teochews are the 2nd-largest Chinese dialect group after the Hokkiens, and Teochew influences are evident in local street foods in Singapore (kway chap, p’ng kway, oh-chien, etc.).

In Malaysia, the Teochews are a sizeable community in Penang (behind the Hokkiens), and Kimberley Street is known as “Swatow Kay” (i.e. Swatow Street) in local Hokkien lingo, due to the large presence of Teochews there.

However, by then, the local Thais had mis-took the name 𝗽𝗮𝗸 𝘁𝗵𝗼𝗻𝗴 𝗸𝗼 (白糖糕) as referring to the deep-fried crullers – perhaps because the itinerant street-vendors in the old days would cry out “𝗽𝗮𝗸 𝘁𝗵𝗼𝗻𝗴 𝗸𝗼, 𝗲𝘂 𝗰𝗵𝗮𝗿 𝗸𝗼𝗮𝘆!” when they walked the streets selling their wares, and the Thai customers only remembered the first item name.

To the Chinese, this would be as odd as someone referring to a burger as a hot dog!