The three-year-old Nasi Kandar Deen Maju at Jalan Gurdwara (the largest Gurdwara or Sikh Temple in Penang is located right opposite it) is perhaps the most popular nasi kandar spot in Penang at the moment - a queue forms daily before it opens for business at 2.30pm each day. It’s very rare to see Penangites queue under the hot sun for their food - and the fact that most of the folks in the queue are Tamil-Muslims (Mamaks) themselves somehow tells me that Deen Maju must be doing something right. The owner of Deen Maju, Mohamed Ismail Seeni Mohamed, used to help his older brother at Deen in Toon Leong on Transfer Road, until he upped and left to set up his own spot here.

How to order your nasi kandar at Deen Maju: 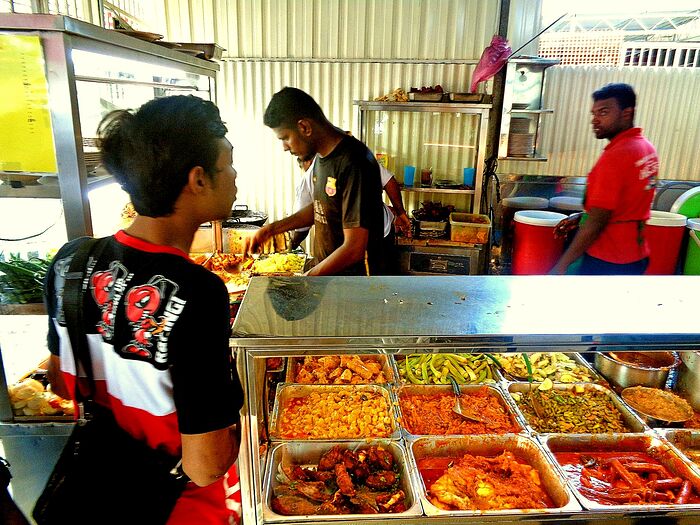 It’s extremely rare to see Penangites queue up under the sun for their food - and the fact that they do so daily when Deen Maju opens for business at 2.30pm each day tell us that Deen Maju must be doing something right! Besides the fact that majority of Deen Maju’s clientele are Tamil-Muslims or Mamaks themselves. 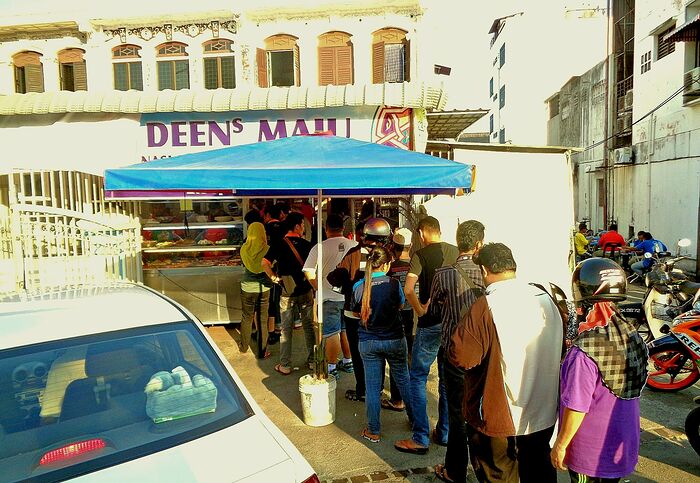 Our plates of nasi kandar - both feature complex blends of curry sauces which simply came together beautifully. 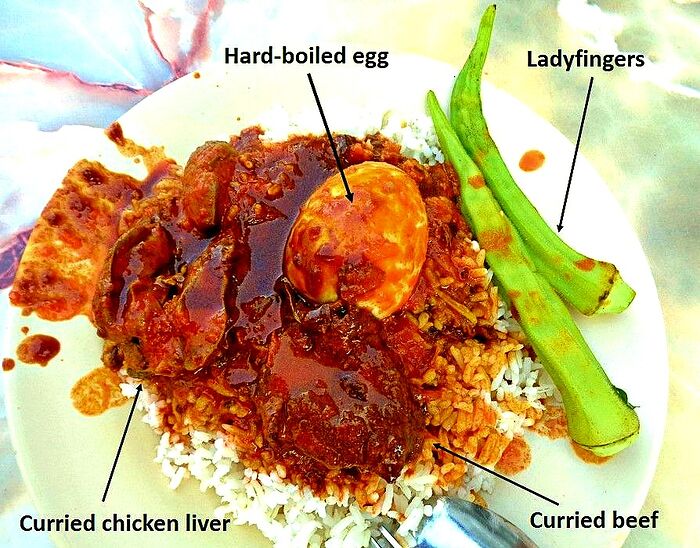 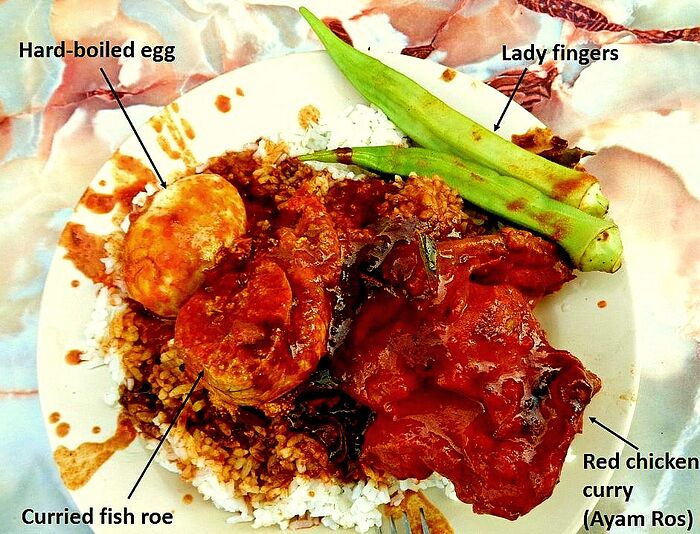 Back-street seating at Deen Maju - it is, after all, a street food 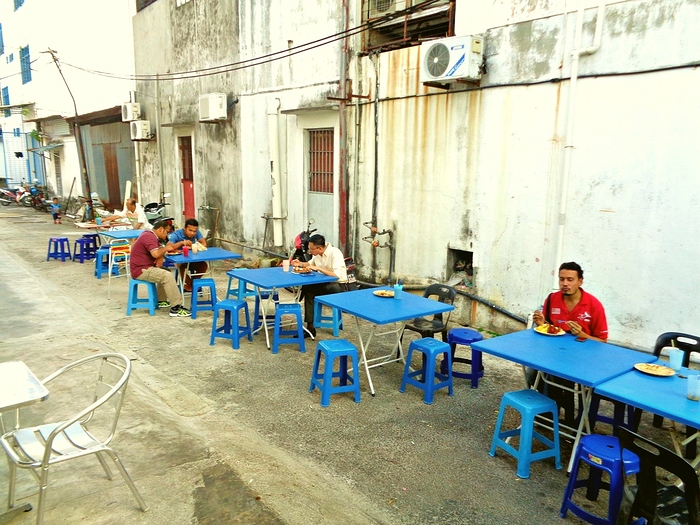 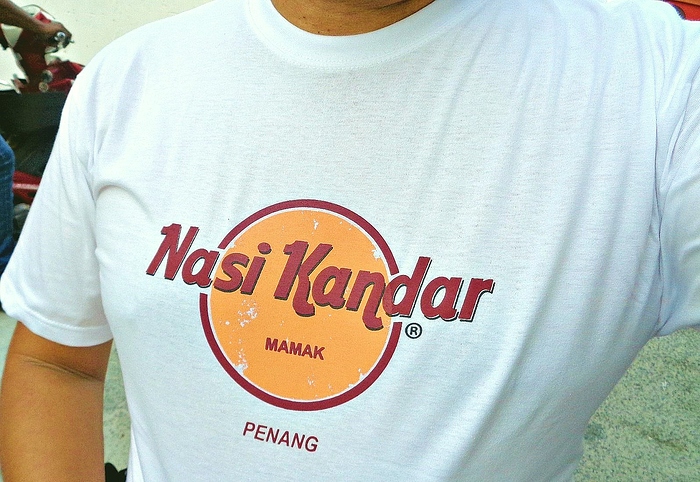 I must say it all looks really good. What with the liver and fish roe it’s seems to have more variety than Line Clear. I suppose the obvious question is how do they compare?

At the moment, Deen Maju’s better than Line Clear, as the latter had just undergone some upheaval recently and total change of chefs - it was the result of a family squabble and Abdul Hamid (the previous owner) had to relinquish control of the eatery to his cousin, Abdul Latiff.

Subsequently, Abdul Hamid brought his cohort of chefs & servers with him when he left. Line Clear is currently run by Abdul Latiff’s new team.

Chris - I went to Line Clear out of curiosity to try its food today. The standards are still pretty good, though not as exceptional as when the previous cousin, Abdul Hamid, was running it. Standard of its curries was also inferior to Deen Maju’s.

Nasi kandar can be regarded as Penang’s “State Dish”, if there is one. Its curries are mainly of Tamil-Muslim origin, with very distinct tastes and aromas which set them apart from other regional Indian, Malay, Indonesian or Thai curries widely available in Penang. Traditionally, dating back to the early-20th century, Penang’s nasi kandar vendors (e.g. Syed Ibrahim of Hameediyah, Kirudu Mohd Kuppaikani of Pelita and Sirajuddin Mohd Mydin of Kayu ) hail from the Ramnad district of Tamil Nadu in …

However, I appreciated the fact that I can just order my meal within minutes here, whereas Abdul Hamid’s new restaurant in Kuala Lumpur is seeing two-hour, 70-people-long queues and hundreds of excited KL patrons. Those poor KL-lites are so desperate for a taste of good Penang nasi kandar - believe me, I had not come across a single decent one in all my 5 years of living in Kuala Lumpur - you really to go to Penang for a taste of the real thing.

Are the two plates in the pictures the ‘winning combinations’ at this stall when it comes to combining the curries? I am counting at least 18 that they offer?

No, we just ordered off-the-cuff. It was only afterwards that my Penang friends told me that the spiced, fried chicken and curried squid are the two must-orders at Deen Maju - but happened that we didn’t order either one

Update: Two years down and Deen Maju still retained its spot as Penang’s most popular nasi kandar spot, with the ever-present queues the moment it opens for business at 2.30pm each day.

Out of topic and random, may i know where did you get the t-shirt from?

Out of topic and random, may i know where did you get the t-shirt from?

It was bought from a souvenir shop on Lebuh Acheh (Acheen St).

Haha the shirt looks familar! I sometimes wear the same HR Cafe shirts every day for a week. It messes with people’s heads. The shirts are exactly the same, but the cities are different. I have many HR Cafe shirts.

I have many HR Cafe shirts.

I have some interesting HRC t-shirts, too, ever since I bought my first one in Washington DC back in 1992. The last one I bought was from Almaty, Kazakhstan. 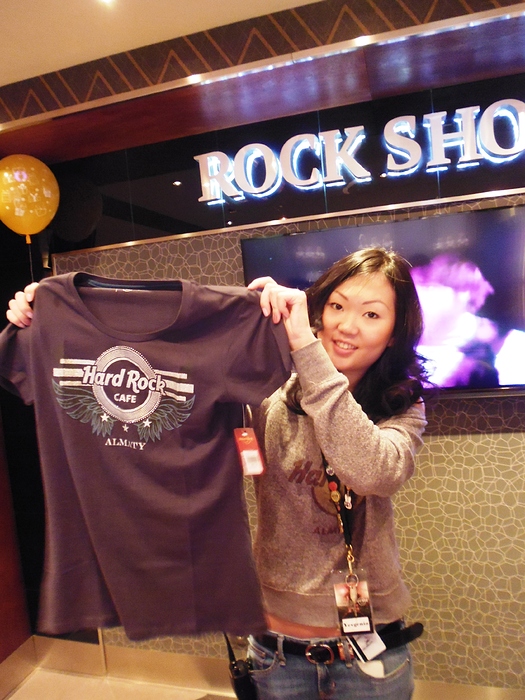 Gonna make it there! Though, Kyrgyzstan is more of a priority, for some reason.

I got a couple in Seoul, at the night market… instead of “cafe” under Hard Rock it’s “Seoul” haha… Another “Seoul” where the city name should be. A knock-off but the quality is quite good. Exceptional price-quality ratio.

The latest hot-selling t-shirt in Malaysia - an ode to Malaysia’s national dish, the nasi lemak. 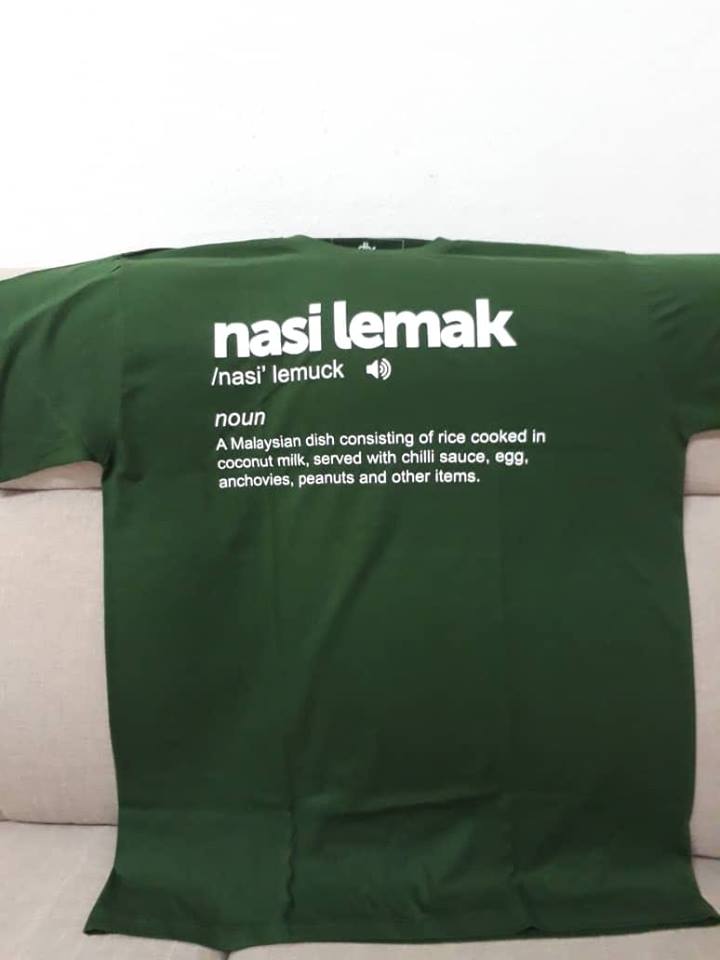 Have they made one for chicken rendang yet? Gregg Wallace wasn’t amused that the chicken skin was not crispy.

Have they made one for chicken rendang yet? Gregg Wallace wasn’t amused that the chicken skin was not crispy.

Frankly, I think Gregg was misquoted - he only said that the chicken rendang’s skin was not crispy, and since all the sauce was on the skin, he’s missing out on the flavour. He certainly did not suggest that she should make chicken rendang with crispy skin.

But then, it generated such wide publicity for the programme, with both Malaysia’s Prime Minister and Opposition Leader jumping into the fray to condemn both Gregg and John Torode for “wrongfully demanding crispy chicken rendang”, I guess the two Masterchef judges just played along. All publicity is “good publicity” for them.

I think Gregg was misquoted

No doubt about it. I watched the programme and agreed with his comments. I don’t like to eat chicken skin that isnt crispy and, if that’s where the flavour is, much of the point of a dish will be lost.

Take-out nasi kandar dinner from Deen Maju amidst the current lockdown, because of the recent spike in COVID cases in Malaysia (roughly 2,500 to 3,500 new cases daily for the past fortnight). I opted for curried chicken, tofu, a hard-boiled egg, okra and a curried vegetable mix (cabbage, French beans and carrots).

“Nasi kandar” traditionally has all types curry sauces drizzled over one’s rice and side-dishes. A take-out would mean all the meats and vegetables are wrapped together in a greaseproof wrapper, allowing them to blend together and cross-absorb the different flavors from the various curry sauces.

By the time I got home and unwrapped the aromatic package, an intoxicating aroma of the intermingled curry sauces wafted out. Each grain of rice had been imbued by a blend of the gravies and sauces. Talk about “messy deliciousness”. I might just opt for “nasi kandar” take-outs instead of dine-in in future. 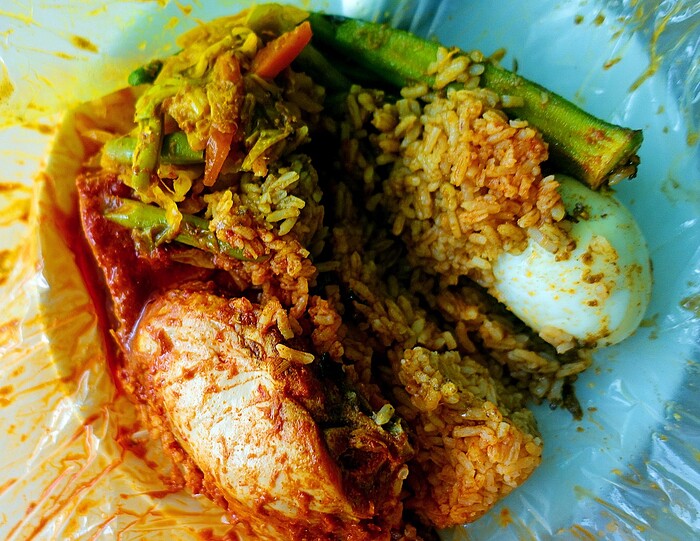 Inspired me again. Getting that today. Does the delivery hold up??

And, btw, any curried item tastes just as good even when kept for a while, and then re-heated. When I used to work for Singapore Airlines, I had to fly on business several times each month - back in the 90s, staff like me would fly First Class all the time. We always get the best food there is - but I remembered the best ever meal I ever had in all my years of flying was the Indian biryani with chicken curry one, which I had on my flight from Denpasar, Bali, back to Singapore in 1994. My conclusion: spicy curries and rice just keeps better than any other type of food.