One of the most popular mamak (Indian-Muslim) fried noodles (called “mee goreng”) spots in Penang is the Tanjung Bungah Mee Goreng stall, located in front of Chuan Foong, a tiny old Chinese-owned coffeeshop housed in a ramshackle wooden building along the wind-swept, sea-fronting Tanjung Bungah Road. 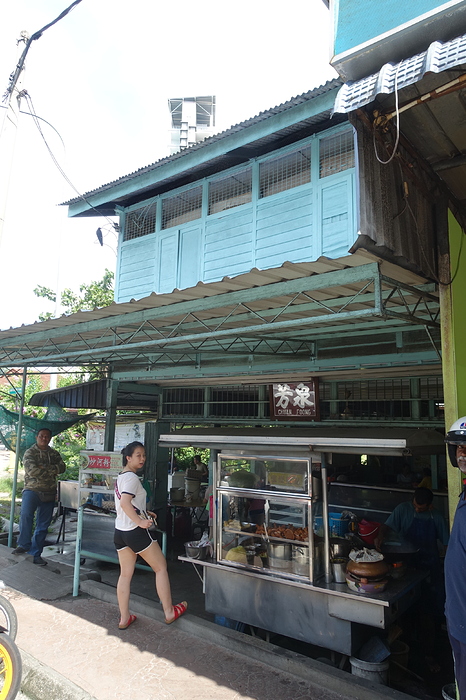 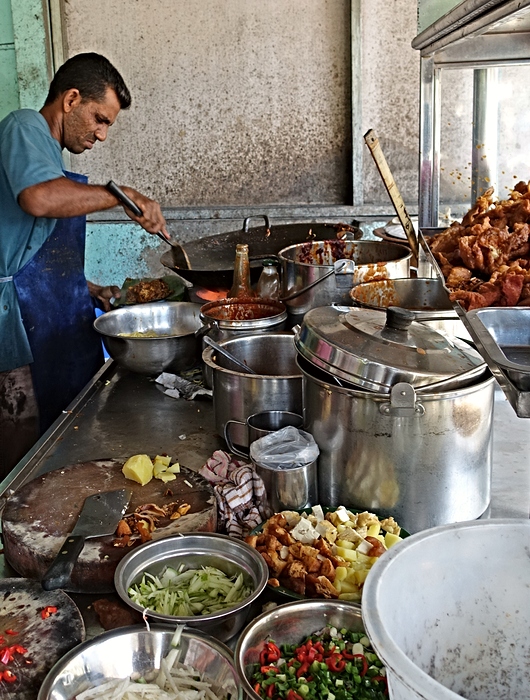 Most people do take-outs, where the freshly-fried, steaming hot noodles will be wrapped in banana leaves. The use of fresh banana leaves for wrapping is a very traditional practice in South-east Asia and one can immmediately see why: it imparts a delicious aroma to the hot foods within. There is simply no substitute for it. 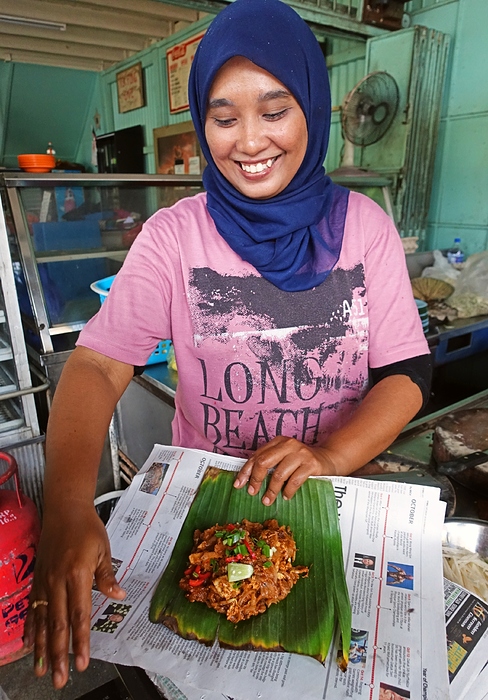 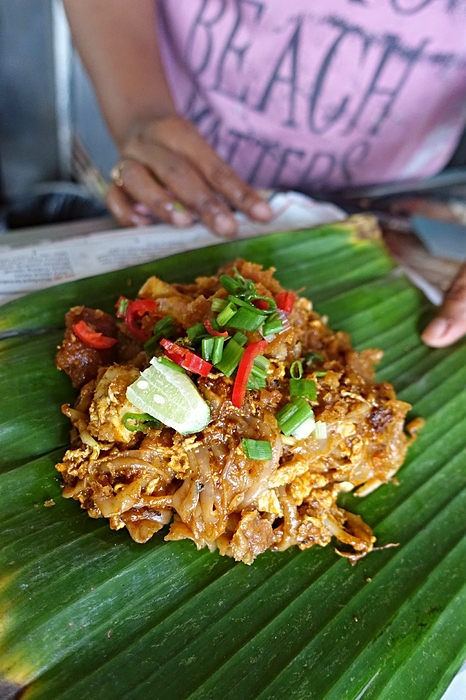 Unfortunately, those who opt to dine at the coffeeshop gets their noodles served on plates - maybe we should’ve requested for banana leaves instead of plates there. Either way, the noodles were delicious. Their rendition here is moister than those in other mee goreng spots around town. 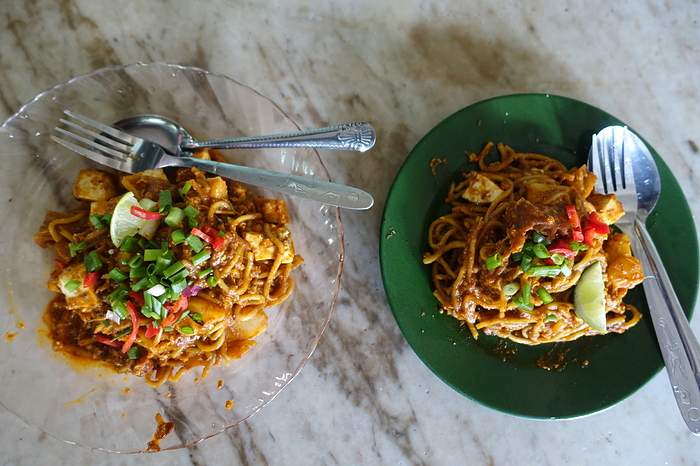 Well-fried thru and thru, the rendition here is also replete with lots of Indian fritters (“cucur”). chilied squid, scrambled egg, wedges of boiled potato and tofu squares. The chili-tomato gravy added during the frying process has very pronounced flavours - the gravy was kept simmering in a large pot placed strategically in front of the wok, so the chef could add ladlefuls of the gravy gradually, allowing the noodles to absorb the moisture . The noodles then were topped with a scattering of chopped red chilis and green scallions before serving. 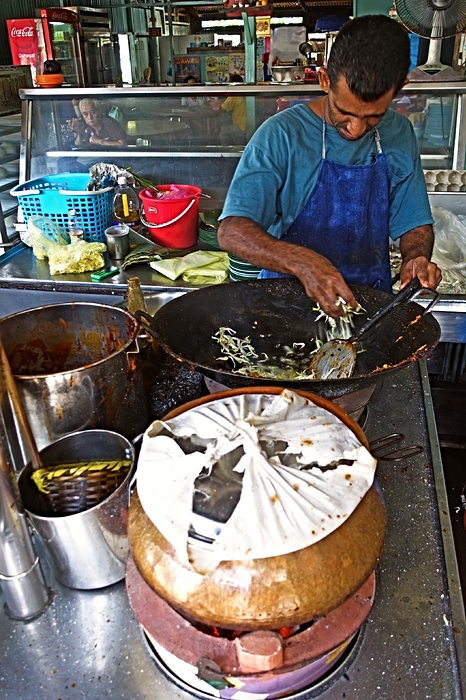 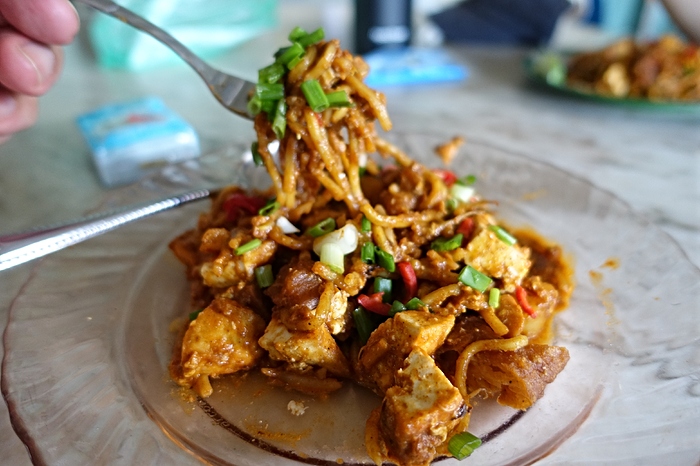 The coffeeshop itself is Chinese-owned, and has a languid old-world charm about it. It serves traditional beverages like Hainanese coffee and tea, and even chilled beer and soft-drinks to go with your mee goreng. 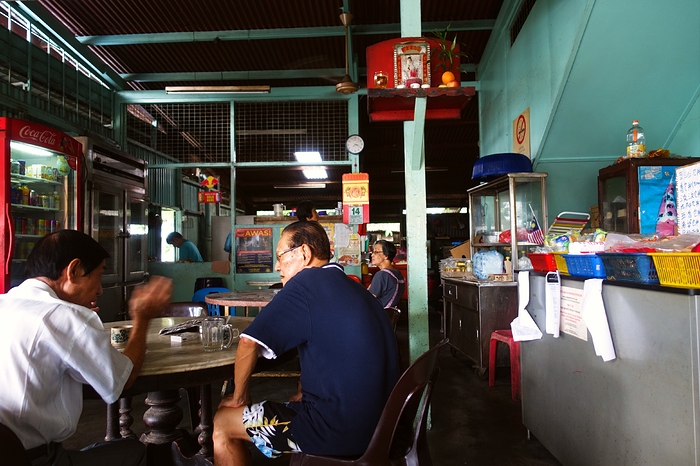 Back to Tanjung Bungah Mee Goreng today, as I could not stop thinking about its deliciousness, which stayed on my taste memory long after the meal last month. Guess what, it tasted even better the second time around - moist, well-fried Indian-style noodles, well-spiced with a full-bodied flavour, and seared till one could taste the smokey aroma. 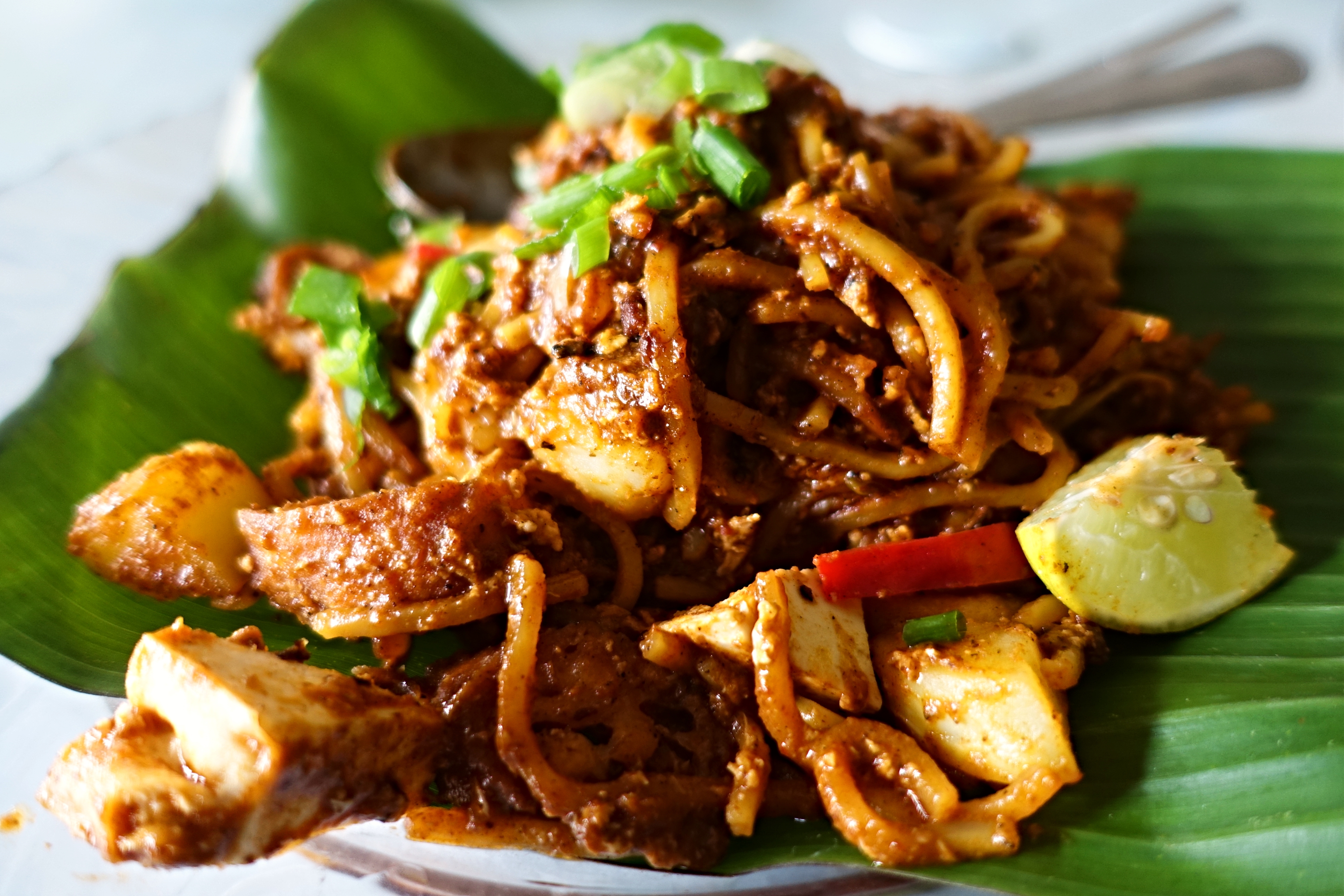 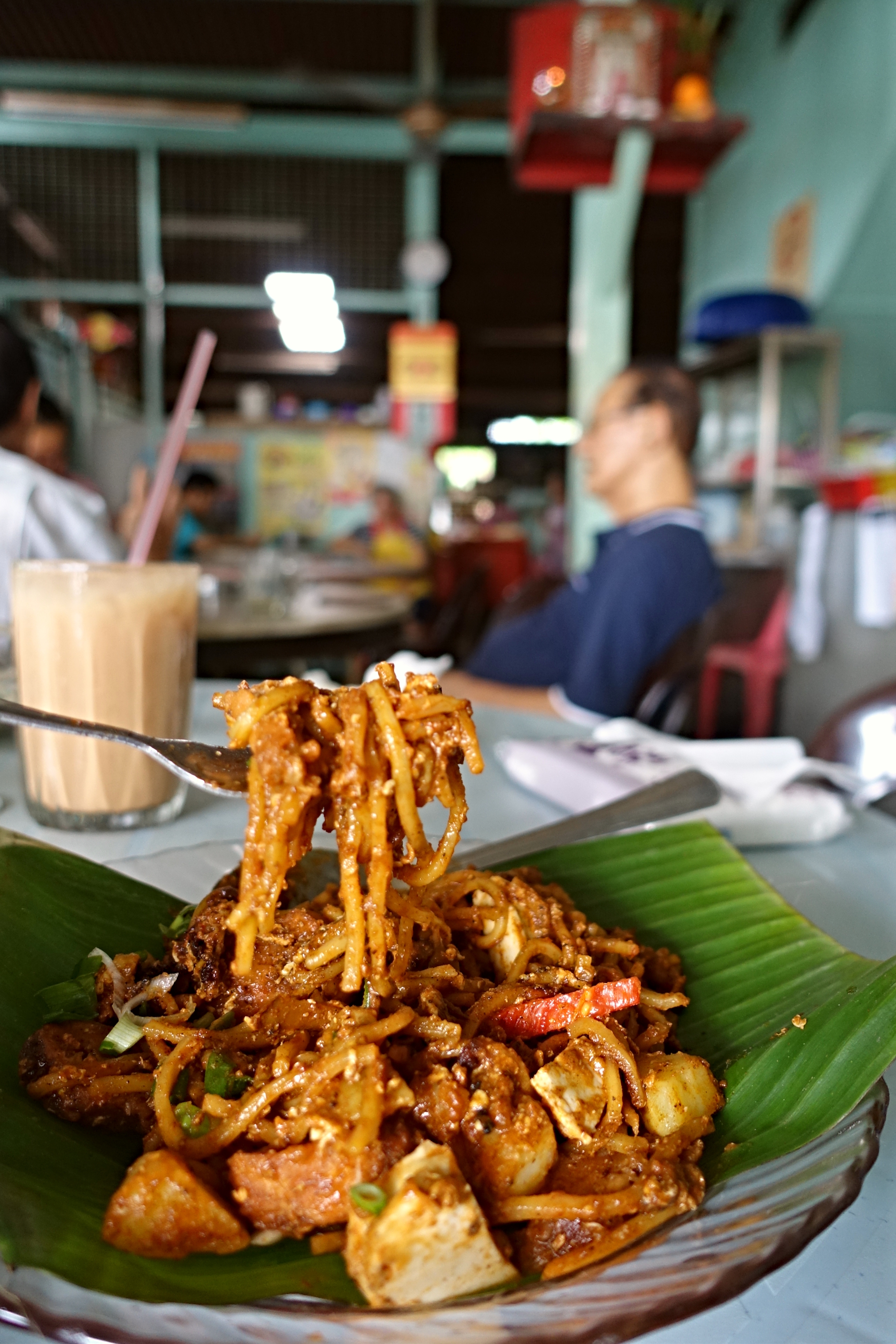 Stallowner-chef, Faizal bin Sultan, 39, took over the business started by his father 48 years ago. His famous father has decided to retire, but left his time-proven recipe to his son, who seemed to have been able to replicate his father’s technique to a ‘t’. Like his father before him, Faizal stuck to tradition by frying over a charcoal-fired stove: 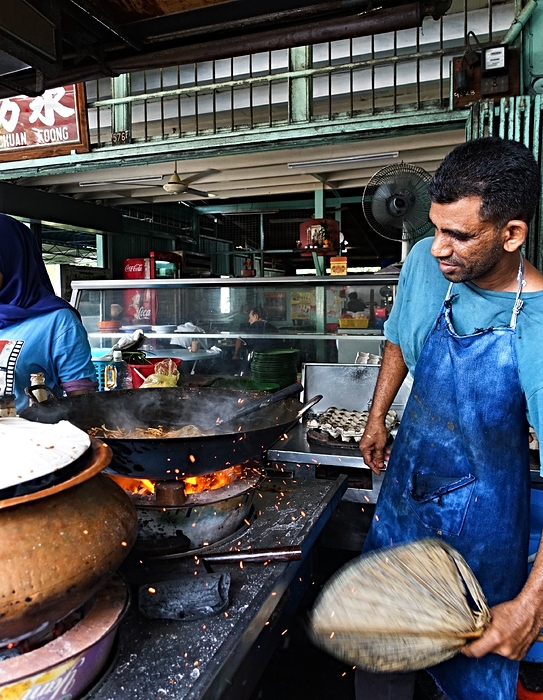 Like other mamaks (Indian-Muslim) mee goreng hawkers (e.g. the Bangkok Lane Mee Goreng Man, and Hameed Mee Sotong at the Old Esplanade), he fried his noodles using a rapid circular motion (which you won’t see in a Chinese hawker doing wok-frying). He’d stir-fry the thick, yellow Hokkien noodles, to which he’d add wedges of boiled potatoes, tofu, “cucur” (Indian fritters), egg, red chillis, beansprouts and scallions. Lavish smears of spicy chilli-tomato paste would be added, plus ladlefuls of a flavoursome broth to be added slowly so it would be gradually absorbed by the noodles. 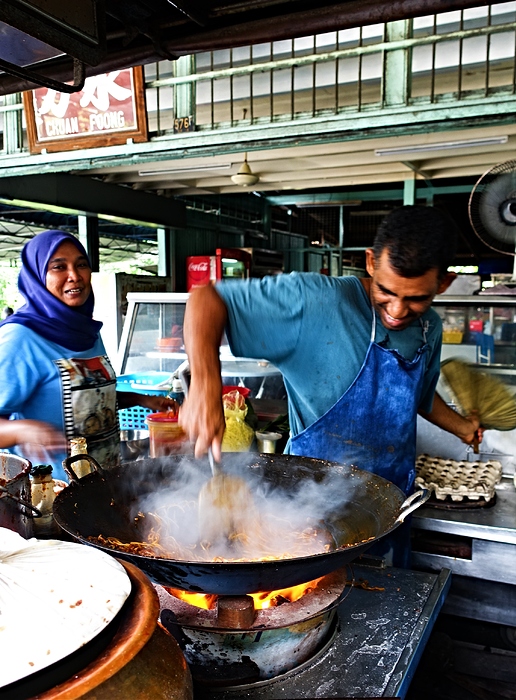 The result was, to me, the tastiest rendition of the Mamak Mee Goreng I’d had anywhere in Penang to-date. 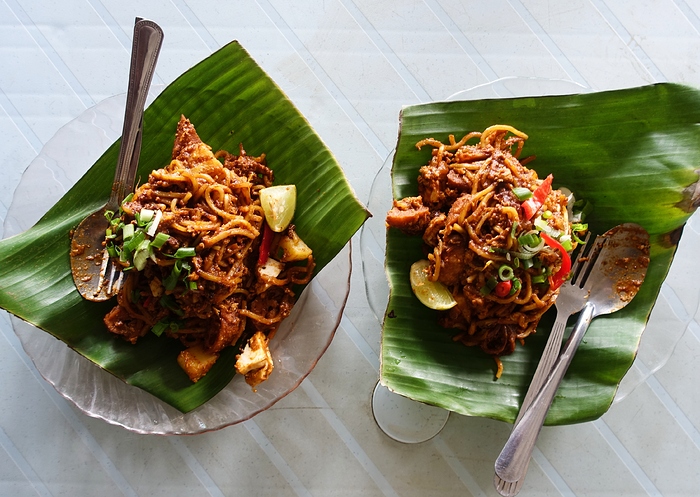 I’m already planning my next trip back here.

Unfortunately, I couldn’t find anything close here. Not to say Malaysian restaurants is nearly non existent, the closest is Indonesian…(or Thai?!)

Maybe I should try looking at Singaporean restaurants… unfortunately, I found a good one, but was closed at end of 2017 due to the declining health of the chef. Frustrating!

Not to say Malaysian restaurants is nearly non existent, the closest is Indonesian…(or Thai?!)

Mamak (or Indian-Muslim) cuisine can be classified as a regional cuisine of its own in Malaysia & Singapore. It blends South Indian (Tamil and Keralan) cooking style and ingredients with Chinese and Malay influences found in Malaysia/Singapore (e.g. the additional of tofu, use of yellow Hokkien noodles). In Penang, where the Indian-Muslim community only ranked behind the majority Chinese, and virtually outnumber the ethnic Malays, mamak cuisine is predominant among the Muslims - i.e. food like “nasi kandar” offered by Deen Maju (which is mamak) is much more common than “nasi campur” or “nasi Melayu” such as the one offered at Buckingham Street (which is Malay).

A close cousin to Malay food, and yet with distinct differences in terms of spicing, is the dangerously addictive and very piquant Padang food from Sumatera Indonesia. My fave Padang/Indonesian eatery in Penang is Nasi Padang Minang.

I think Paris is about 20 years behind London in terms of finding ethnic cuisine from South-east Asia. Sydney and Melbourne in Australia, on the other hand, are way ahead.