We had a farewell dinner last Sunday for a visiting cousin before she returns to Hong Kong the following day. We chose 7-year-old 𝗟𝗮 𝗩𝗶𝗲 at Le Dream Boutique Hotel on Rope Walk, as it had been quite a while since we were last there. 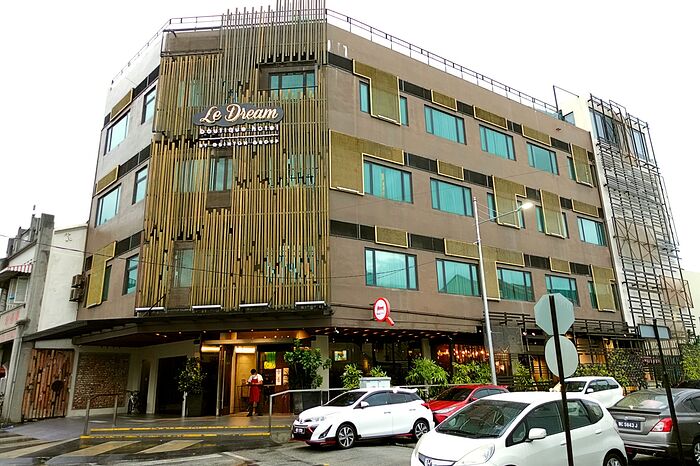 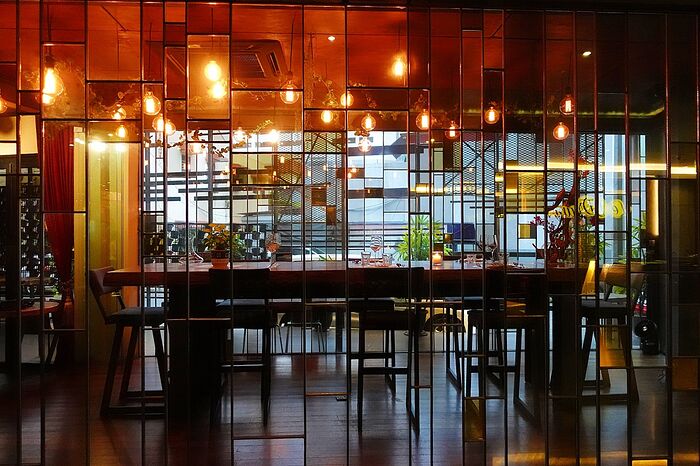 The swish eatery is run by veteran Penang restaurateur, Kelvin Lim, who was known for Cassis on Belissa Row, one of Penang’s first independent fine-dining spots. Now-defunct Cassis was the training ground for many of Penang’s best-known chefs, e.g. Beh Weng Chia who once fronted Chin Chin and Indigo.

Kelvin Lim now pours all his effort into La Vie, and every other table seemed occupied by regulars, on first name basis with him. 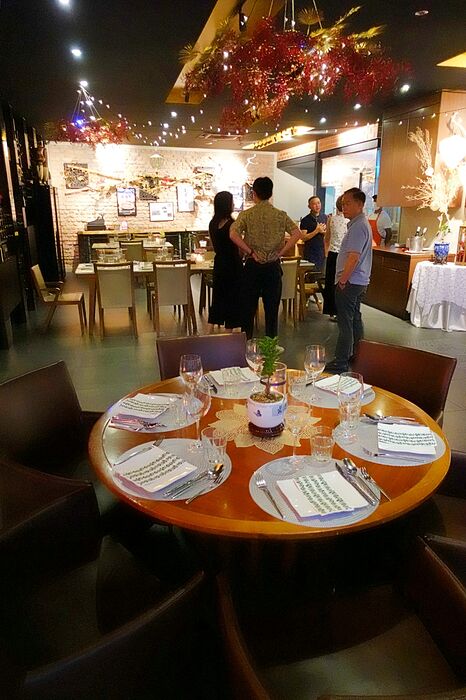 Our dinner last Sunday consisted of:

Crabmeat croquettes - quite surprised that the said “croquettes” turned out to be crisp, hollow Indian panipuri pastry shells filled with crabmeat and condiments like Béarnaise sauce and parsley. 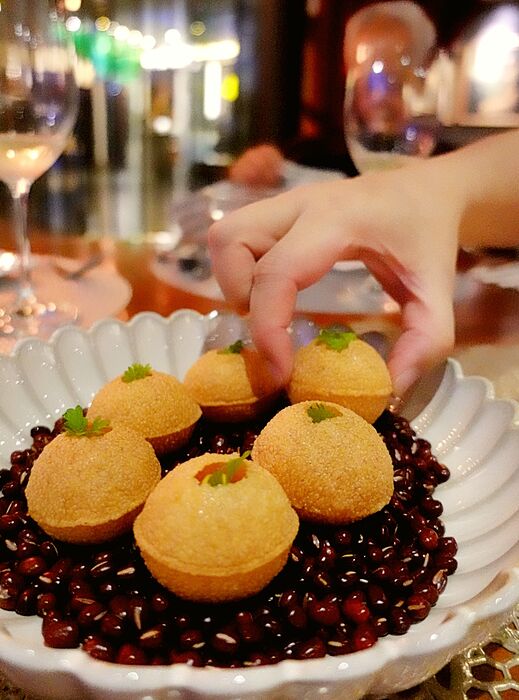 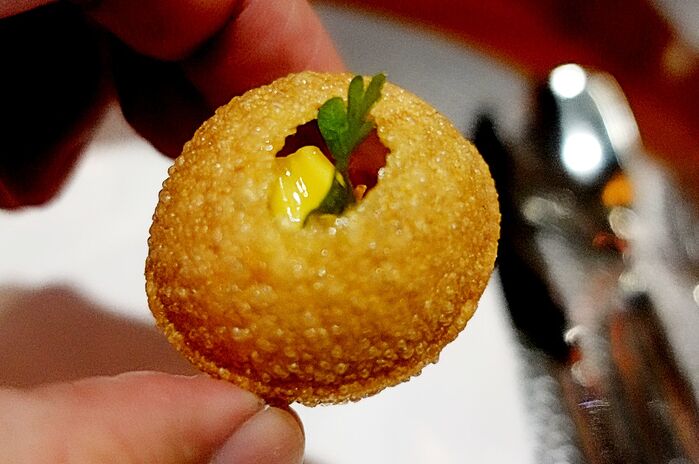 Irish oysters - these plump Irish rock oysters were some of the best we’d tasted in town. 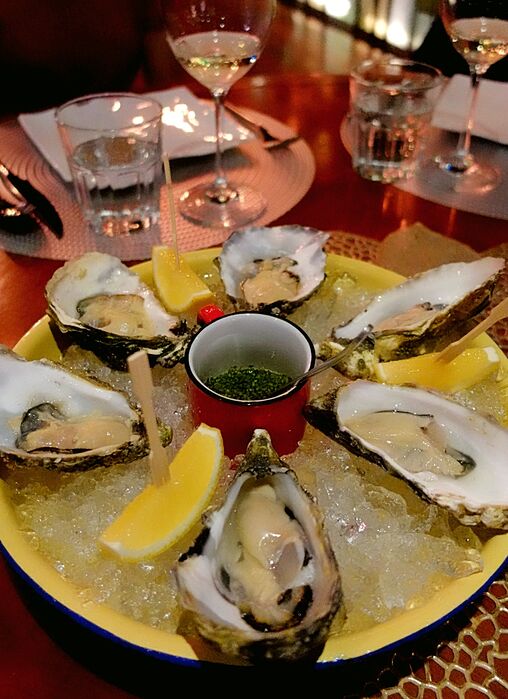 Crispy unagi - rather unattractive-looking, but turned out to be very tasty: breaded batons of Japanese eel, deep-fried to a golden-crisp on the outside, but fairly moist within. The flavours were marvellous. 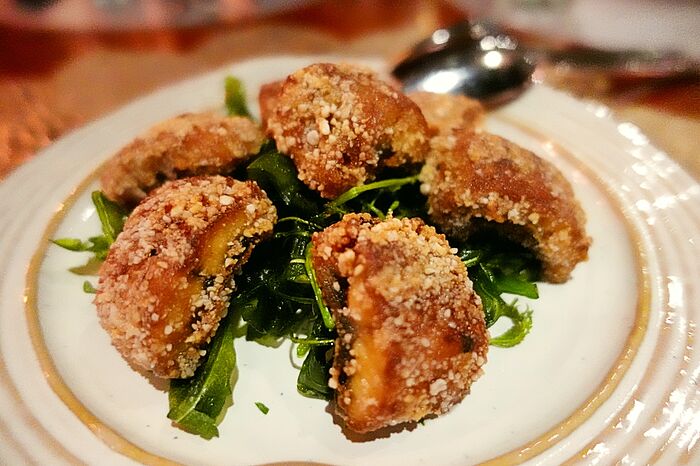 Char-grilled squid, with mango-lychee relish - one of the standouts for this dinner. Perfectly-cooked squid which was toothsome, and nicely complemented by a tangy-fruity relish pepped up with finely-chopped torch ginger. 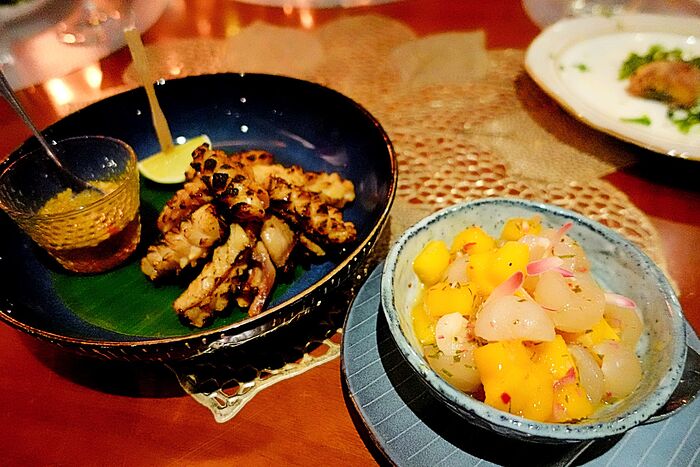 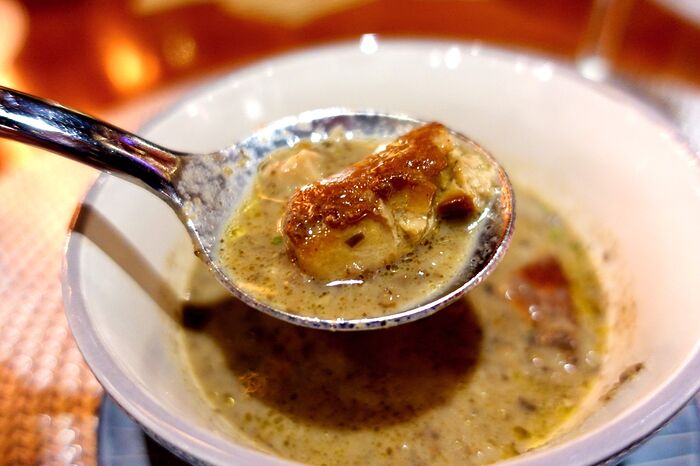 Kataifi prawn - this was another standout. It’s a ubiquitous Greek-inspired dish served in quite a few places around town, but never done as well as the one we had here. Very fresh prawns, cooked a la minute. 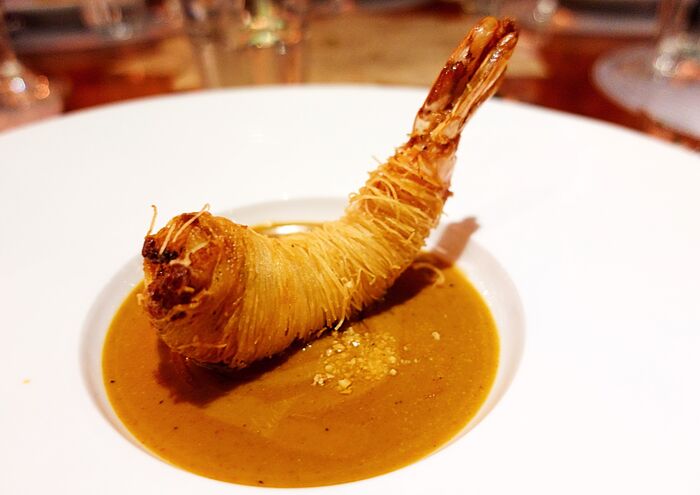 Grilled Japanese wagyu A4 sirloin, served with sautéed mushrooms and potato chips. The restaurant’s signature dish, and they absolutely nailed it here. 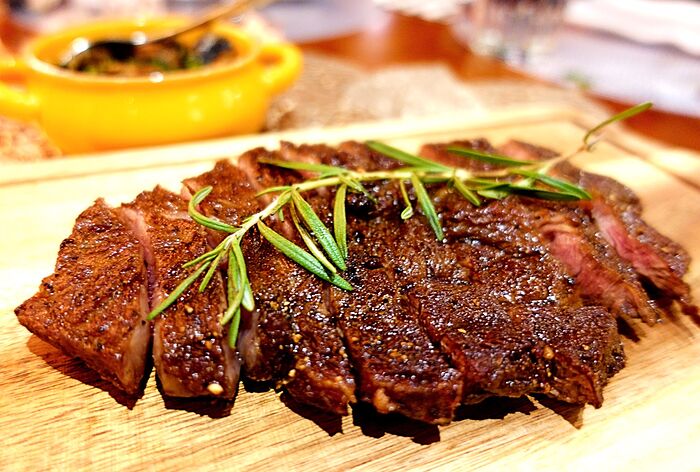 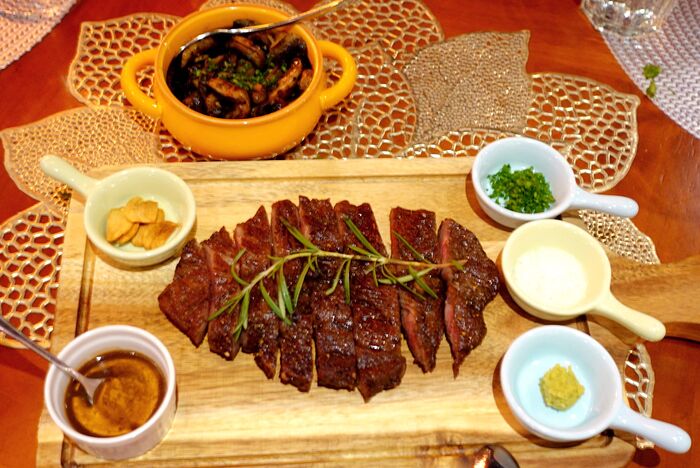 There were some very interesting-sounding desserts on their menu, e.g. pear strudel with hazelnut cream, panna cotta with assorted berries, and Belgian dark chocolate cake with banana, peanut butter & rum (now that sounded divine), but we skipped those as another cousin had brought along a selection of cakes from popular local bakery, Mon Delice Patisserie, for us to try - also stuck a candle on one of the cakes: an early celebration for our HK cousin whose birthday is next Friday, 4 June. 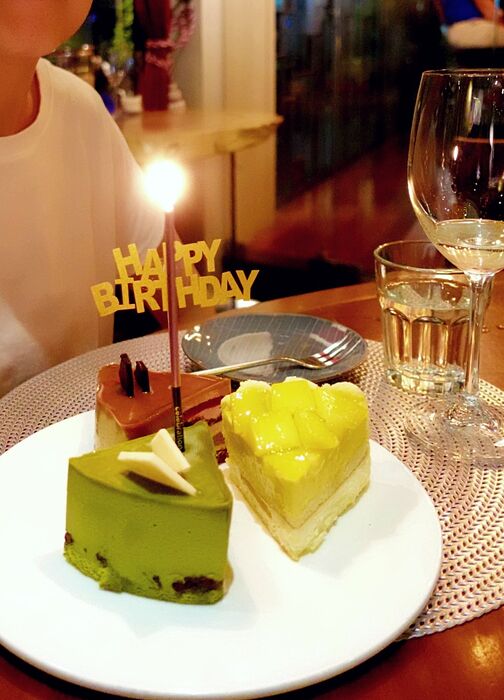 Pleasantly surprised by the cooking standards here - quite unexpected, as we’d normally drove past this part of town without realizing there’s a pretty good restaurant right here. I need to come back and try the desserts. 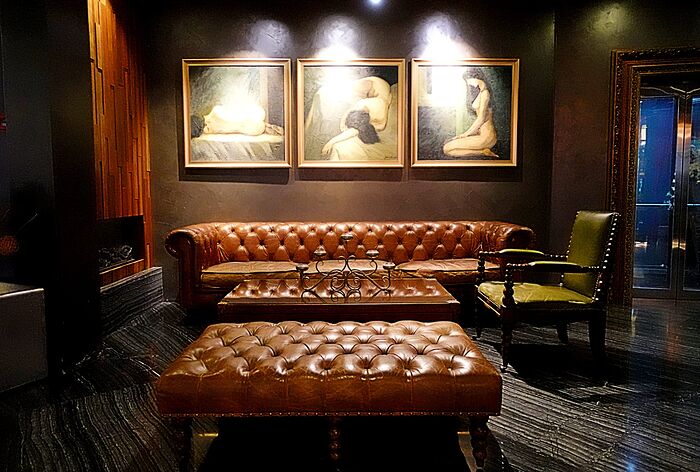 That kataifi prawn is very inspiring. I’m going to try making it at home if I can find the shredded phylo pastry.

Greek kataifi is usually a sweet pastry, with the shredded phylo wrapped around walnuts or pistachios and drenched with a honey/sugar syrup. 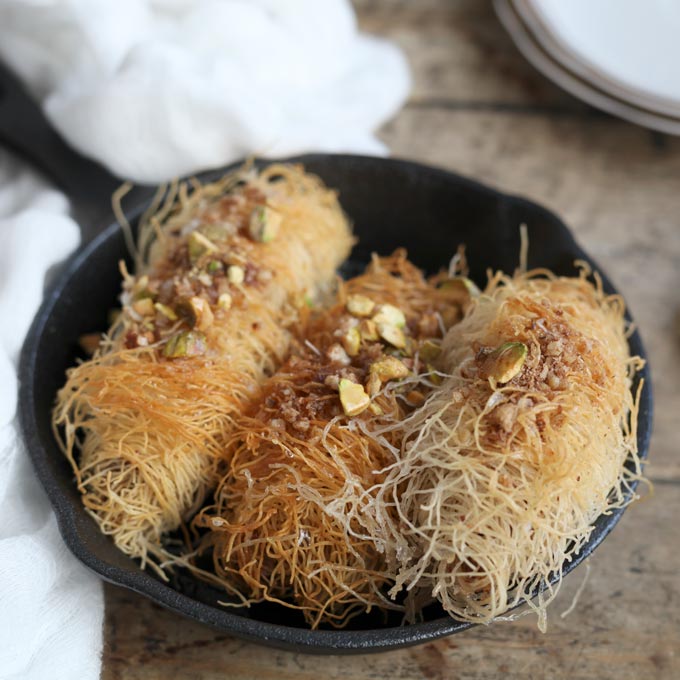 What is kataifi? Kataifi, kadaïf or kadaifi (in Greek: κα (ν) ταΐφι, in Turkish: kadayif) is a very popular dessert in the Middle East, Turkey and Greece. Traditional kataifi is made from shredded phyllo dough or angel hair (also called kadaïf), and...

But Google also found some recipes for savory versions, filled with cheese like tiropita.

I wonder if anything like this has made it to the United States recently. At one time, there was a great Malasian restaurant with a rikshaw at the entrance for decoration–and a full menu of options in Corona Del Mar (Orange County, California), but I’m not aware of anything even close any more–just small, family run places.

That kataifi prawn is very inspiring. I’m going to try making it at home if I can find the shredded phylo pastry.

Do share your version here when you make it.

The Thais have a very similar dish, too, called goong sarong, but I guess La Vie’s chefs chose to identify with Greek kataifi as it sounds more “exotic” from our Southeast Asian perspective here.

but I’m not aware of anything even close any more–just small, family run places.

Hi Ray, Malaysian restaurants are pretty hard to come by in the United States. Most Malaysians who emigrate to the West chose Commonwealth countries, e.g. UK, Canada, Australia, New Zealand, due to our shared history and also the commonalities of our education systems.

So, any Malaysian restaurant in the US which tries to cater to the tiny Malaysian (and Singaporean) diaspora there tends to offer very basic dishes: nasi lemak, roti canai, char koay teow - which are not more than street foods back in Malaysia/Singapore. It’s basically feeding a demographic which missed its comfort food items.

That perfectly describes a place in Pasadena–across the street from a junior college.

Run by a husband-wife team.