The tranquil fishing village of Teluk Kumbar on the south side of Penang island (30 minutes’ drive out of George Town) is also home to a clutch of eateries offering “Mee Udang”, the Malay version of prawn noodles. Malay prawn noodles tend to be less spicy than Chinese prawn noodles (or Penang Hokkien Mee) and has a distinctive tomato-based sweet-sour flavour. 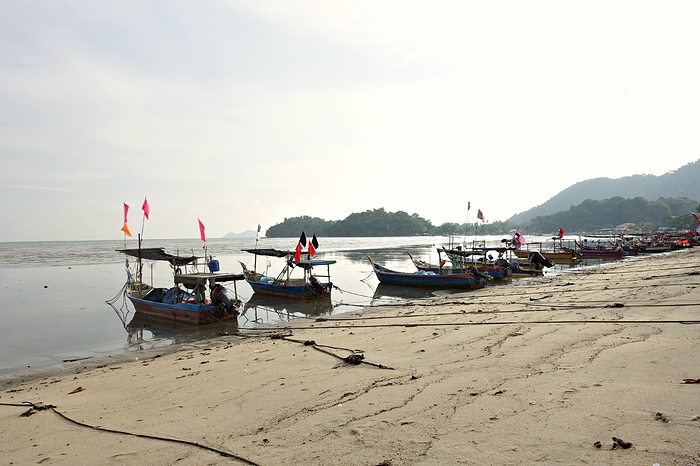 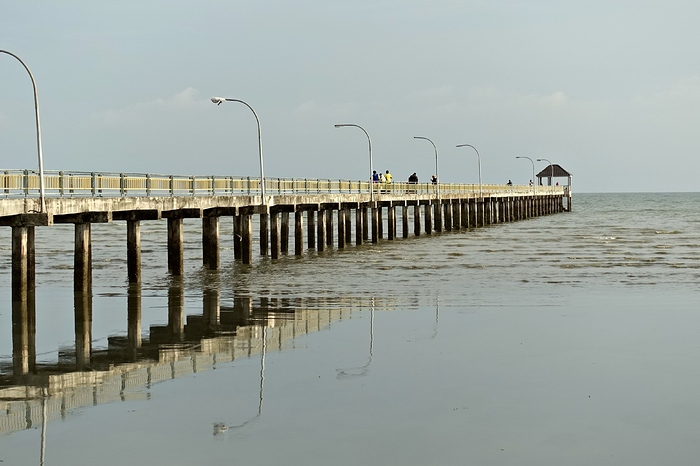 Salwa Mee Udang, run by 60-something year-old Azmi Don, claims to be the first of these mee udang places. Besides sultans & members of Malaysian royalty, local celebrities which include veteran actors, directors and musicians like Ahmad Tarmimi Siregar, Ahmad Daud, Ahmad Nawab and the late Malay screen legend, Jins Shamsudin, have dined here. According to Azmi Don, “It was Jins Shamsuddin who gave this place its name – he came here so often that one day, he got frustrated because my stall was nameless.” 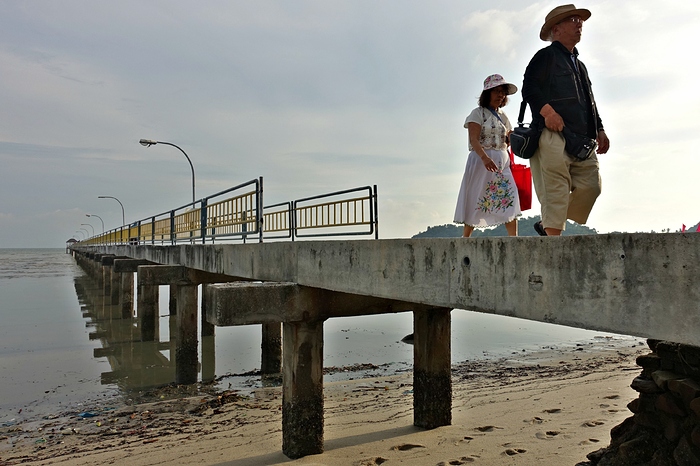 What sets apart Teluk Kumbar’s ”Mee Udang” from other versions in the rest of Malaysia has to be their use of some of the freshest prawns ever - caught from the sea a mere metres away from the eateries themselves. 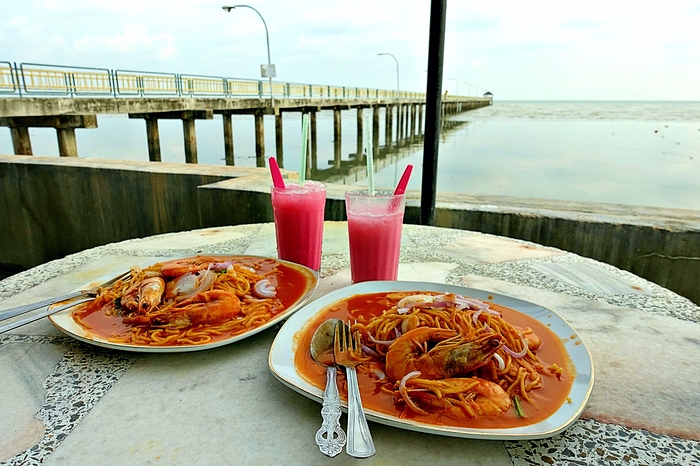 Sirap Bandung, a local drink popular to Malays in both Malaysia & Singapore, consisting of iced rose-scented syrup with evaporated milk. It usually comes in a shade of shocking pink. 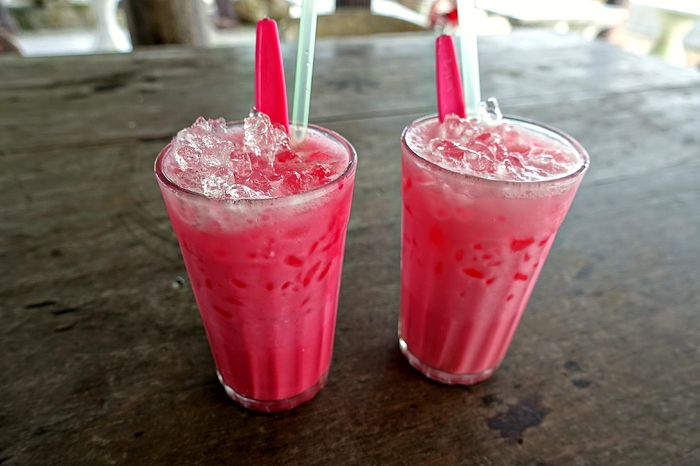 The classic Mee Udang or Malay prawn noodles - you can find this dish all over Malaysia, but nothing approaches the version served here in Penang which comes with large, very fresh prawns, caught a mere hours before. Thin slices of raw purple onions provide a textural crunch and a sharp stab of flavour to undercut the richness of the tomato-based gravy. 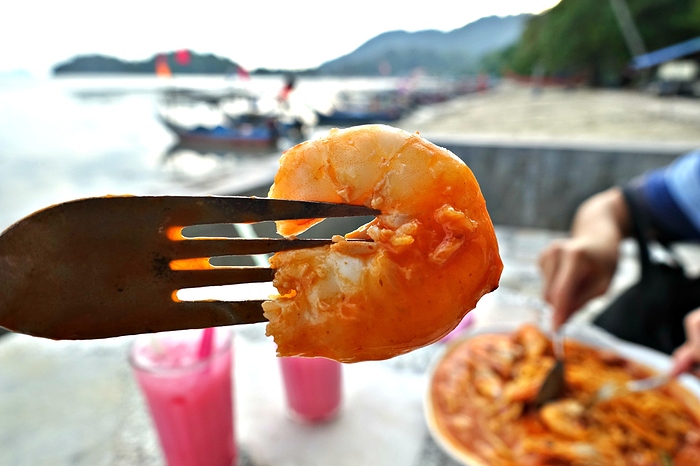 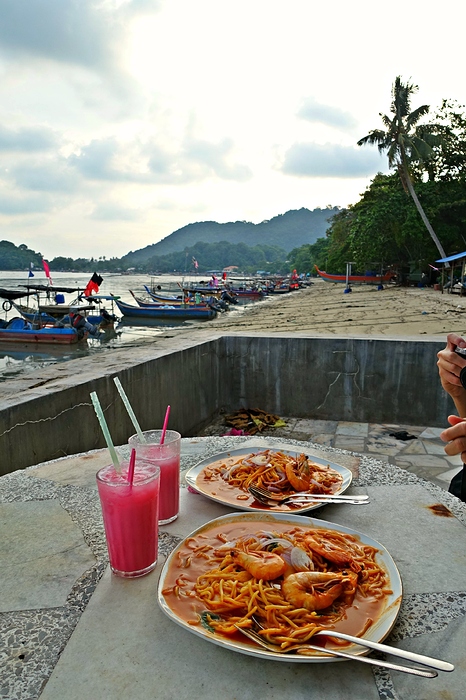 A peep into owner-chef, Azmi Don’s kitchen reveals rows of Heinz and Kimball tomato soup cans (?!!). Azmi denies that his is an “instant Mee Udang”. “Yes, I use canned soups because, unlike other stalls, I don’t use potatoes to thicken the gravy – potatoes are for Mee Rebus, which isn’t what I’m selling. What keeps my customers coming back is the blend of over 60 roots and spices I add into the gravy. During my father’s time, he used even more spices which are almost impossible to get these days,” he shares. 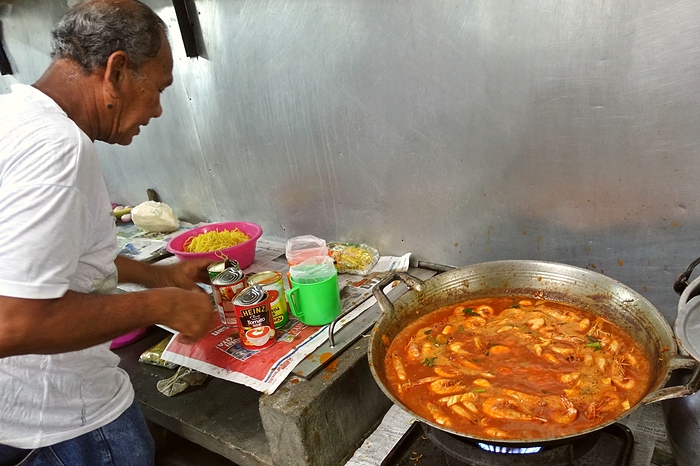 Azmi takes about two weeks to prepare the fragrant blend of spices that include ginger, Tongkat Ali (a local herb also used as an aphrodisiac by local Malay-Muslims) and lemongrass. “I sometimes have to get the spices from as far as Kelantan.”
There is a unique spicy-bittersweet after-taste to the dish which complements the strong prawn flavour. Azmi insists on fresh ingredients or he won’t get into the kitchen.
“The prawns are also very important – you will never catch me cooking with prawns imported from neighbouring countries. “Market-bought prawns are not fresh enough for me. I get the prawns straight from the local fishermen,” he says. 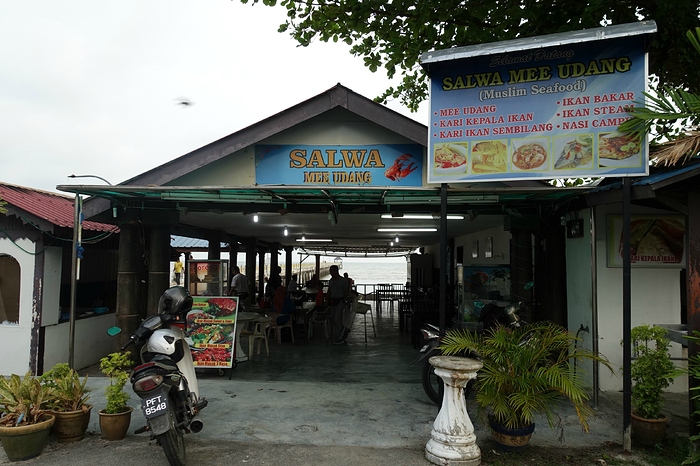