Nasi Kandar has to be Penang’s “state dish” - essentially a rice dish where you choose from a wide spread of spiced and curried side-dishes, all of which would be piled onto your plate of steamed white rice. The Nasi Kandar -man then spoons over a mind-boggling blend of curry sauces over your mound of food. What you end up with is a delicious spicy combination of textures and flavours which will stick in your mind long after your meal is over.

Historically, Penang’s Nasi Kandar vendors are Tamil-Muslims who hail from the Ramanathapuram district of Tamil Nadu, Southern India. These migrants came to Penang in the early-1900s during the British colonial era. During that time, Penang’s spice retail business was dominated by spice-women who came from Tenkasi and Kadayanallur, both towns in Tirunelveli District of Tamil Nadu, India.

These days, some of Nasi Kandar eateries have expanded into chains, e.g. Pelita and Kayu. But all of them are still owned by mainly third-generation descendants of the original Ramnad Nasi Kandar founders. Sadly, one of the pioneer Nasi Kandar eateries, Cravan Café, which would have been nearly a century old if it’s still open today, had just shuttered a few years back - its old location, which was perhaps the only eatery in Penang to remain open throughout the Japanese occupation during World War II, and the curfews during the racial riots of 1969, had been taken over by another Penang Nasi Kandar stalwart, Kassim Nasi Kandar.

My fave Nasi Kandar place in all of Penang has to be Line Clear on Penang Road. It’s got a permanent queue of hungry customers during peak meal times and remains, IMO, the only Nasi Kandar spot which manages to retain (to a certain degree) the unique smells of traditional Nasi Kandar curries - the result of blending the cooking techniques of Tamilian chefs from Ramanathapuram (Ramnad) with the spices provided by the Tenkasi and Kadanayanallur spice-women.

After Mama’s, Line Clear was my favourite place when I was in Penang. The nasi kandar was the best I had in Malaysia. Very good for breakfast and especially liked the salted egg.

Really enjoyed eating here. Would have gone back if we had more time (or a second stomach). Interestingly it had just changed hands of sorts. Apparently the restaurant is licensed to 4 cousins, who are supposed to each run it for a year on a rotating basis, or so on-line articles suggest. I think there was an ongoing court battle since 2010 and a single partner has run it from then, until he was evicted in early February after losing a court case where he was trying to overturn the rotating license. They had a big sign up announcing this on their wall.

We tried it just after the new management came into effect, no idea if anything has changed. The curry sauces here were really good. We had mutton and what I think was cuttlefish. I was never sure throughout our holiday whether sotong meant cuttlefish or squid.

Picture looks like a blur of sauce so apologies for that. 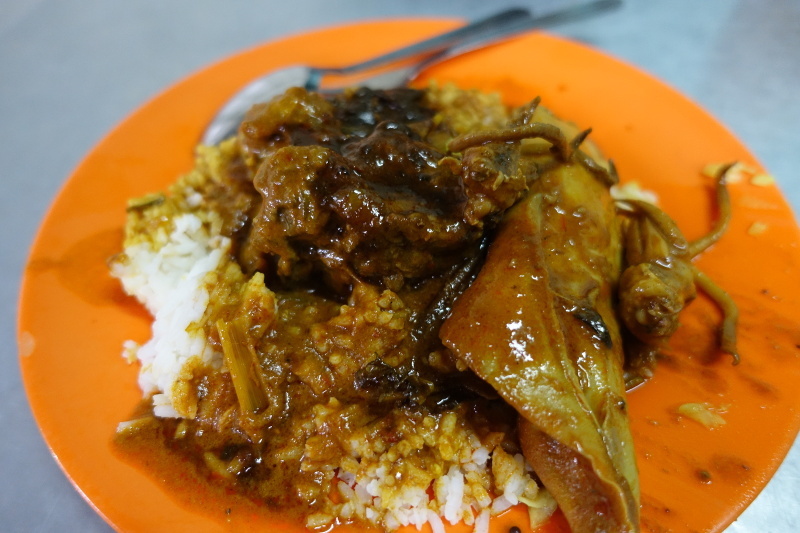 The Malays use “sotong” for both cuttlefish and squid, not making a distinction between the two linguistically. It’s like the Japanese, who only have one word: “kame” (カメ) to refer to both tortoises and turtles

BTW, Lex - you had the curried squid, as per your photo.

On the rotating management of the business between four related families, that had been the arrangement for decades - the founder wanted each of his four sons to have a stake in running the business, and to take turns in leading it, so the operating license for Line Clear is renewed on an annual basis by the Penang City Council to each of the 4 sons on a rotating basis.

One generation later, controversy erupted when the current owner, Abdul Hamid, 67, refused to relinquish his operating license to his cousin, Abdul Latif, 55 (the other two cousins, whose turns will come next, are Sahubarali , 58, and Pathumah Iskandar, 69).

During Abdul Hamid’s watch, the stall became extremely well-known - probably due to social media & the food-blogging craze among youngsters. It was also featured in several food programmes, e.g. Anthony Bourdain’s No Reservations, etc. Business went through the roof & money was rolling in. So, Abdul Hamid decided to hold on, even after his turn was up.

Anyway, after the long protracted struggle, Abdul Hamid, has given in - but 70% of the staff has also quit as they are mainly his own immediate relatives. When you tried Line Clear, it was being run by Abdul Latiff, whose new team would have just started in mid-Feb.

The family acrimony is almost Mafia-like - in fact, in early-Feb, Penangites were shocked by the murder of one of the 3rd-generation family member of this Line Clear clan:

KUALA LUMPUR, Feb 11 — A businessman who owned a nasi kandar restaurant and car wash was shot dead in George Town, Penang early this morning. According to The Star Online news portal, the man identified as 46-year-old Syed Amen Jainul Abidin...