Lunch today - kebab burger from Raja Burger on Union Street. Burger-man, Mohamed Ibrahim, is the son of the legendary Raja Ghani Raja Mydin, who plied his trade at the Esplanade back in the early-70s. Raja Ghani, who turns 80 this year, has retired to Madurai, India. 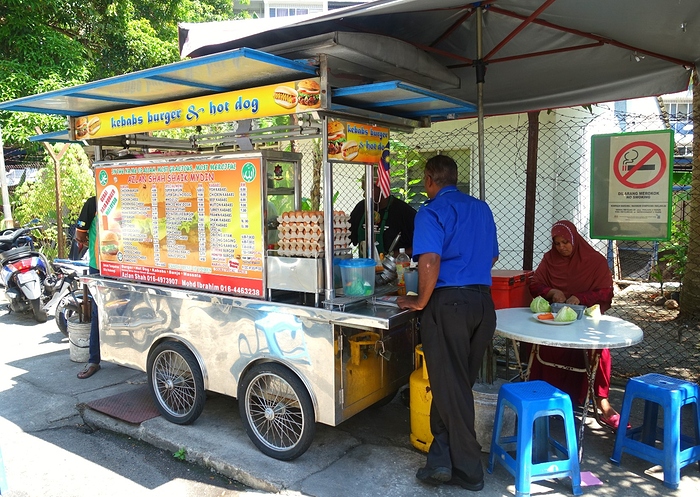 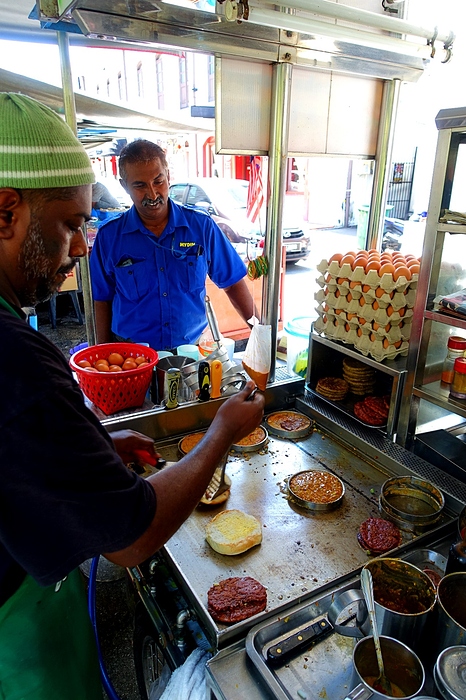 The elderly Raja Ghani gained fame as Penang’s kebab king after an eventful lifetime of cooking: he left high school after just the second year (at St. Xavier’s Institution) in 1955 and hitch-hiked his way to the Indian sub-continent. He worked in a restaurant in Afghanistan, where he learnt how to prepare the blend of exotic spices that was to become the hallmark of his kebabs & burgers.

Raja Ghani also worked as a cook for the British army’s Nee Soon garrison in Singapore from 1966 to 69, before returning to Penang and starting his hawker business.

His son, Mohamed Ibrahim (“Just call me Ibrahim”, he said), still has Raja Ghani’s original tray bearing the selection of spices in front of him to spice up his kebabs and burgers. 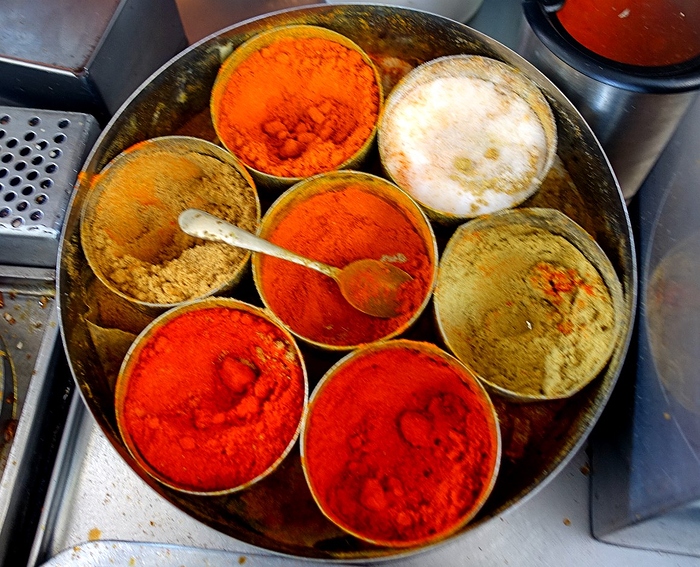 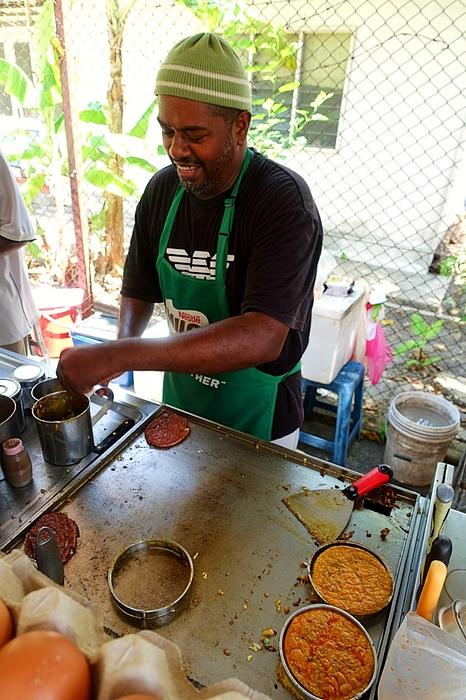 Ibrahim has a large selection of burgers to choose from, but we opted for the goat-meat kebab burgers - which were huge discs of well-spiced goat-meat patties, served in-between an extra-sized burger bun, topped with chopped raw onions. Ibrahim normally topped his burger patties with ketchup and mayonnaise, but we asked for him to exclude that from our order, as we wanted to taste the subtle spices in our kebab meat pattie. 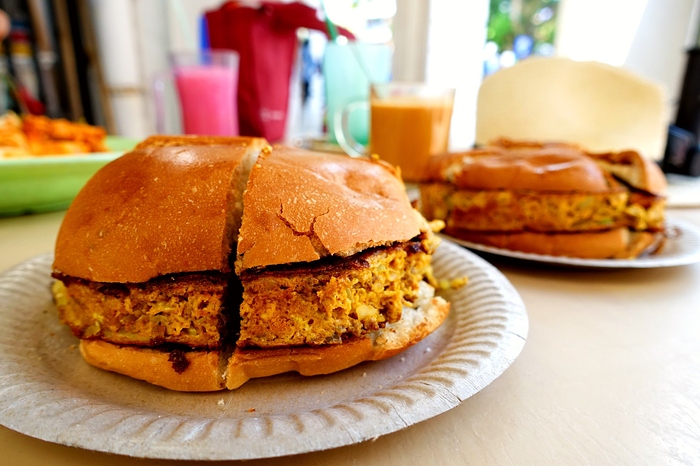 They reminded me somewhat of the shami kebabs I’d had in Pakistan - aromatic from all those spices: cloves, coriander, cumin, turmeric, cardamom, cinnamon, and replete with gingery and oniony flavours. It was hardly chili-spicy, as Afghans are not into chilis, and this carried on in Ibrahim’s cooking till today, despite local Penangites’ predilection for spicy-hot food. 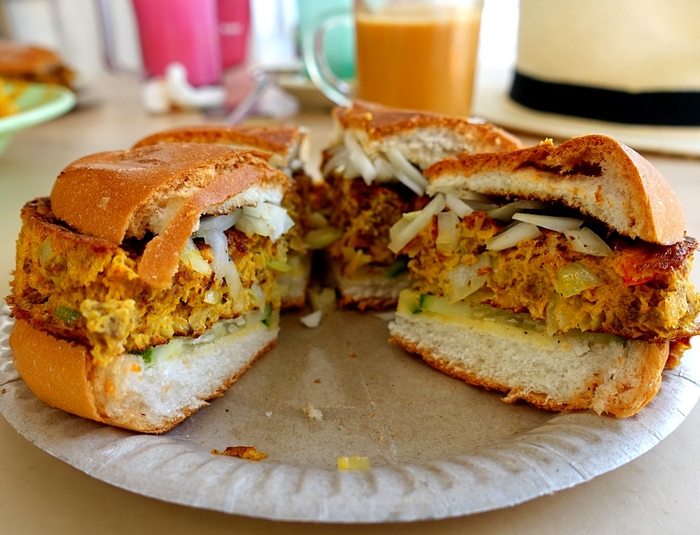 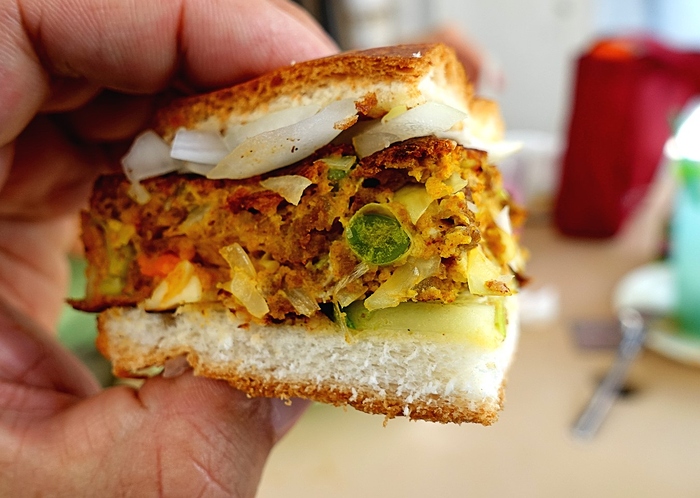 Is it a meat patty that’s then egg-coated? Are the metal rings to keep the egg in?

Is it a meat party that’s then egg-coated? Are the metal rings to keep the egg in?

It’s a loosely-packed meat patty, with beaten egg, onions and finely-diced vegetables worked in, hence the metal ring to keep the rather soft-wobbly patty in shape whilst it’s slowly cooked and firmed up.

we opted for the goat-meat kebab burgers

How could you not?

May I ask how a “kebab burger” differs from an ordinary burger?

May I ask how a “kebab burger” differs from an ordinary burger?

The main difference would be the masala spices added to the minced meat, giving it a more assertive, kebab-like flavour, plus finely-diced onions, carrots and other vegetables mixed into the minced meat to form the patty.

The version here at Raja Burger eschewed lettuce and tomatoes for garnishes - which it offered as part of its “Western-style burger” - and only added raw chopped onions atop the cooked meat patty, before sandwiching it in-between two halves of a large bun.

When I was in Islamabad, Pakistan, a few years ago, I had a shami burger which had lettuce, tomatoes and a thick slice of omelette atop the spiced, minced lamb patty, and served with a side of fries. 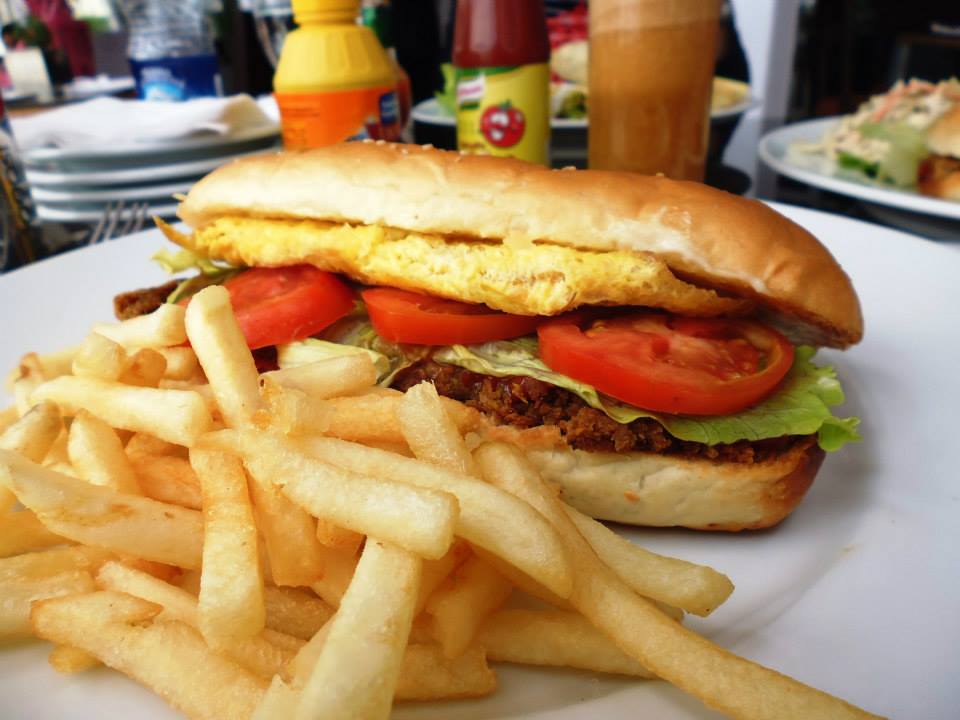