Mee CRC (Manja) is one of oldest & best-known names in Indian-Muslim hawker food in George Town, Penang. It was started just after World War II by an enterprising Indian-Muslim noodle vendor, Mohamed Musa, who hailed from the South Indian town of Tenkasi.

Since the 19th-century, the spice retail trade in George Town had been dominated by the traditional spice-women from Tenkasi and Kadayanallur, both small towns with significant Muslim populations in the state of Tamil Nadu, South India. They sold their wares in the Chowrasta market, where their spices were bought by nasi kandar (rice with curries) vendors who all hailed from the Ramnad district of Tamil Nadu. Such was the influence of South Indians on early Penang’s culinary scene.

Mohamed Musa first sold his fried noodles at the school canteen of the Pykett Methodist School in the 1940s. His biggest fan then was none other than the school’s headmaster, D.S. Ramanathan, later to become George Town’s mayor. 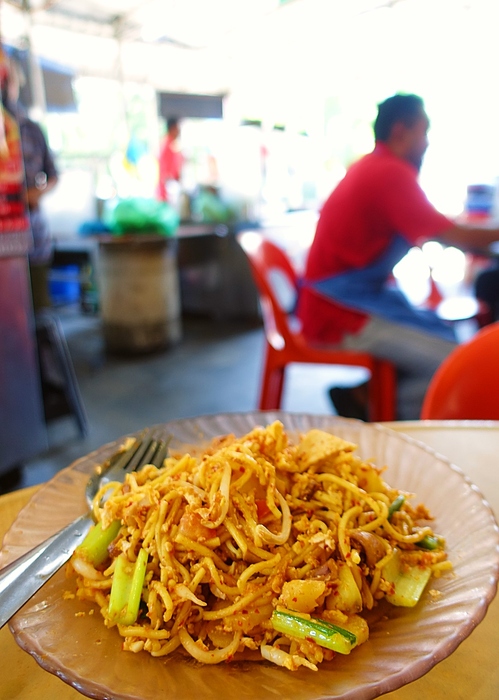 He later expanded his business with the help of his son, Nagoor Meerah, and opened a now-famous push-cart stall on Northam Road where, among his fans, was Malaysia’s former king, the Rajah of Perlis. He nicknamed his business Mee Agung at the time - “Agung” referring to the Malaysian king. The push-cart then moved to a spot near the Chinese Recreation Club (or CRC) in 1978, where they garnered a huge following among local Penangites. There, under the shade of large trees, makeshift tables with stools were set up for customers to eat al fresco. When the CRC developed the plot of land which the push-cart was squatting on in 2002, they moved to Larut Café, now known as Seong Huat, a traditional Chinese coffeeshop on the corner of Bawasah Road and Larut Road. The name of the stall was also changed to Mee CRC (Manja), as their business had reached its apex during their 24-year stint at CRC. “Manja” was a reference to their family’s clan name back in Tenkasi (and not the Malay word “manja” as believed by many people). 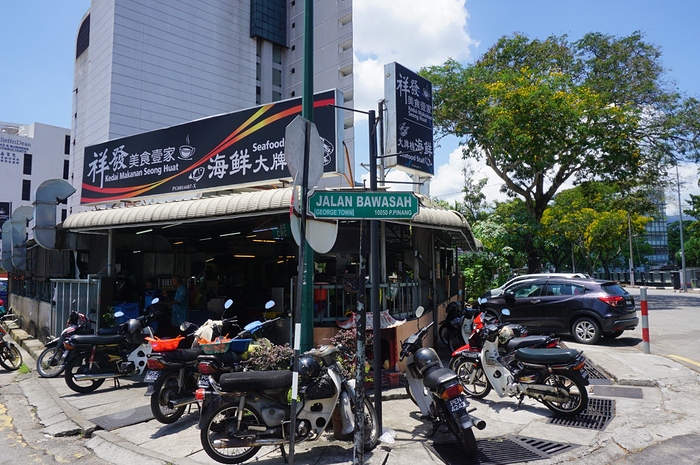 Mee CRC (Manja) at Larut Road was run by Mohamed Razali, the third of Nagore Meerah’s 8 sons, and he continued to do brisk business throughout the 2000s there. However, my last visit there saw the stall now being run by Mohd Razali’s nephew, Mohd Farid, and the standard of cooking was not quite up to my expectations. 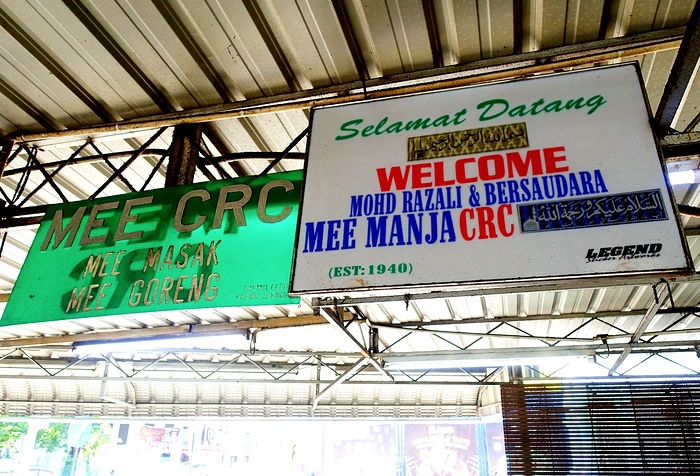 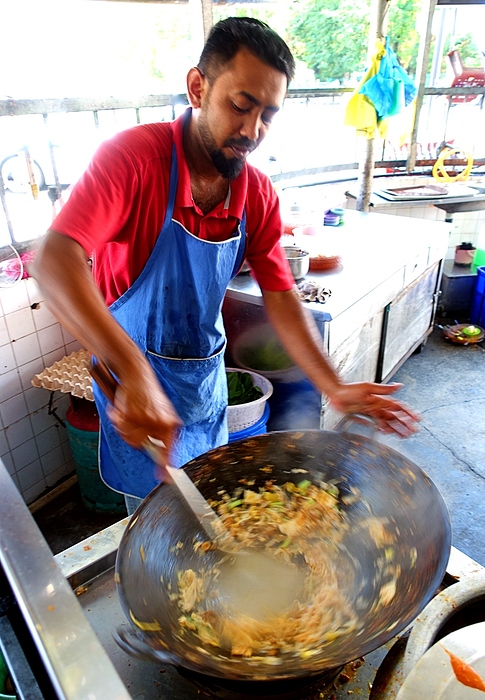 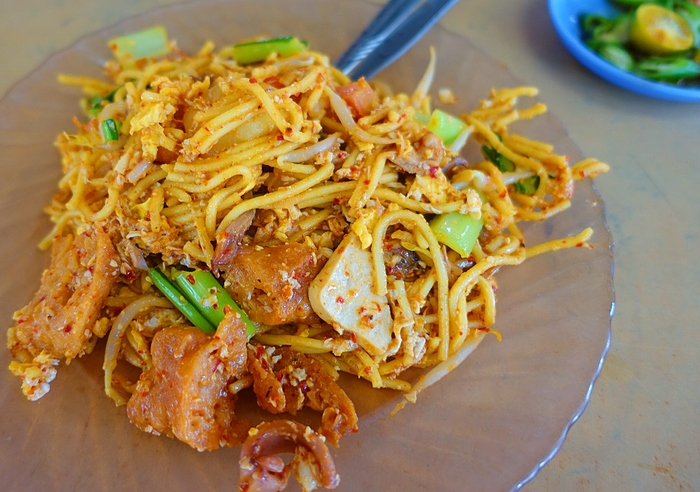 Mee Masak is blanched noodles, drenched with a tomatoey-gravy, with the same accompanying ingredients. A small dish of cut, green chilis drizzled with Chinese light soysauce, and a halved lime, were served on the side, to be added to the noodle dish to further pep up the flavours. 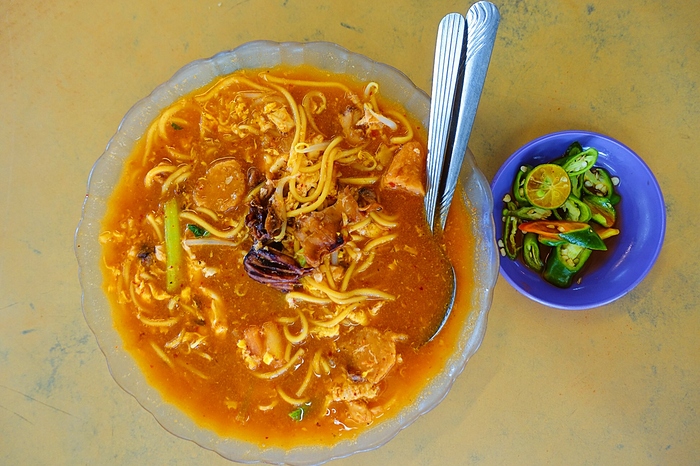 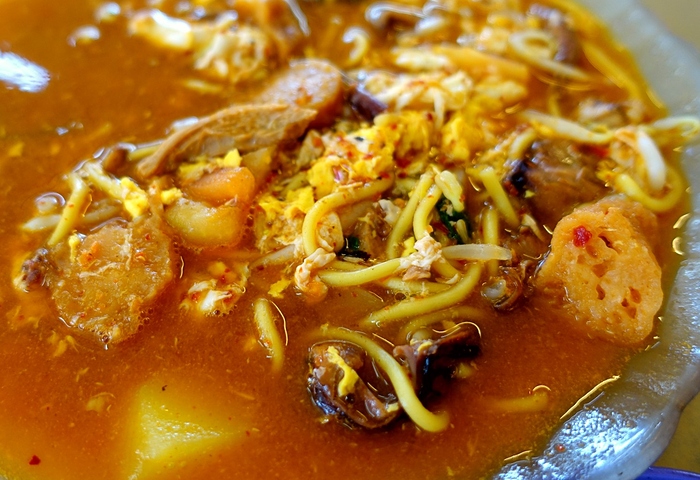 We rather missed Nagoor Meerah’s cooking as his son’s rendition obviously failed to match up to his father’s. 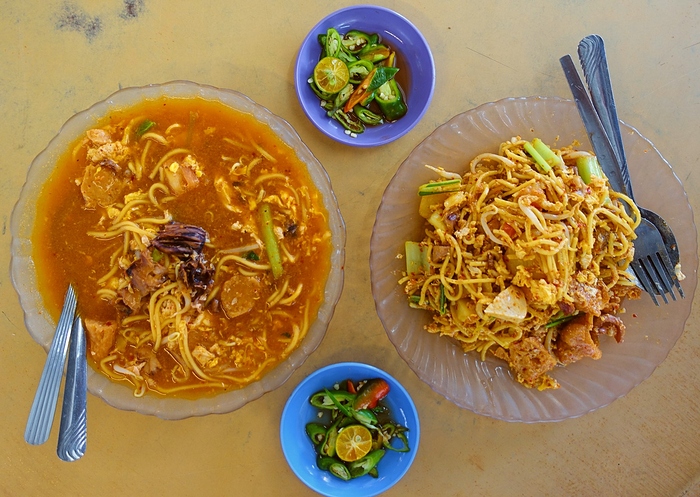 Thank goodness we’ve found another Mee CRC (Manja) stall, located in the Bayan Baru suburb on the outskirts of George Town. This one is run by 61-year-old Mohamed Shah Jahan, another son of Nagoor Meerah, and grandson of the founder, Mohd Musa. 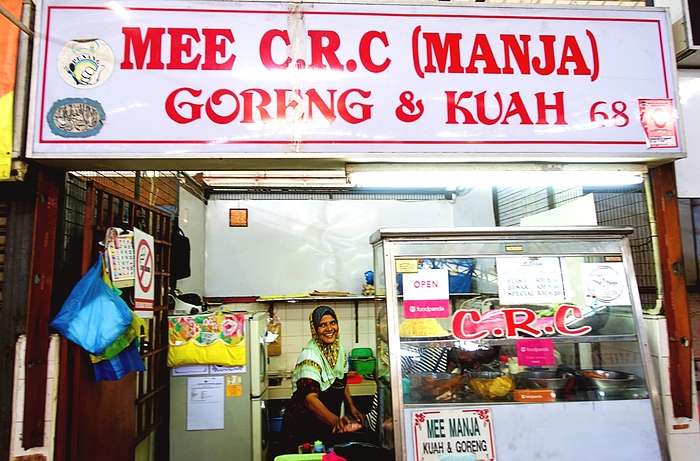 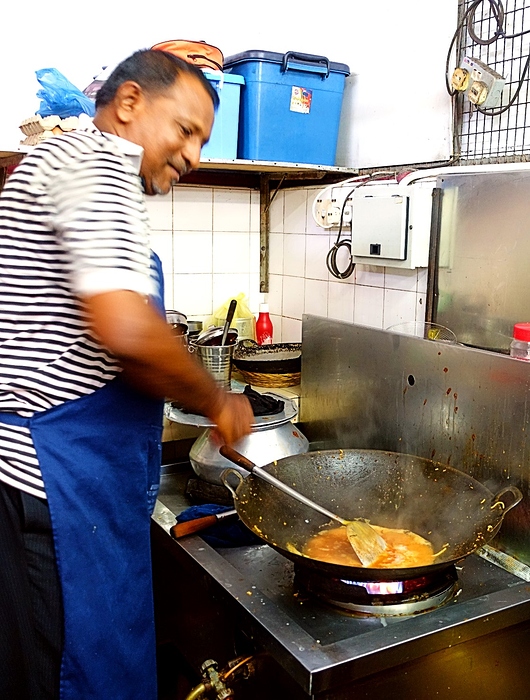 Both Mohd Shah Jahan, who prefers to be called Shah, and his wife, Zarinah Muhammad, who assisted him in serving and preparations, were very approachable. 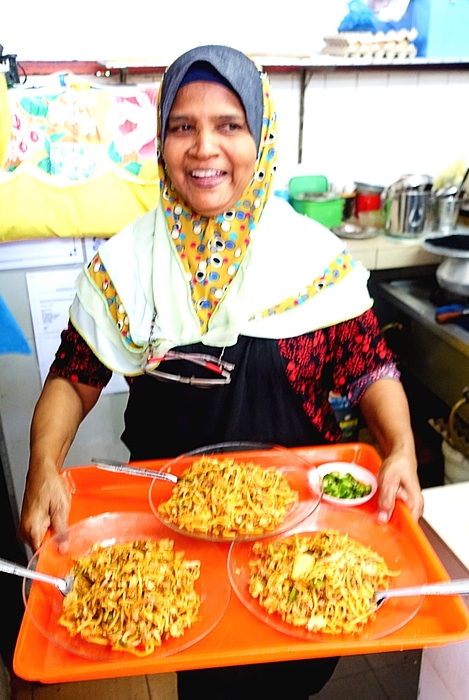 Chef Shah’s rendition was very close to the one we remembered from his grandfather, Mohd Musa’s time, and ticks all the boxes as to what we expect Mee CRC to taste like! 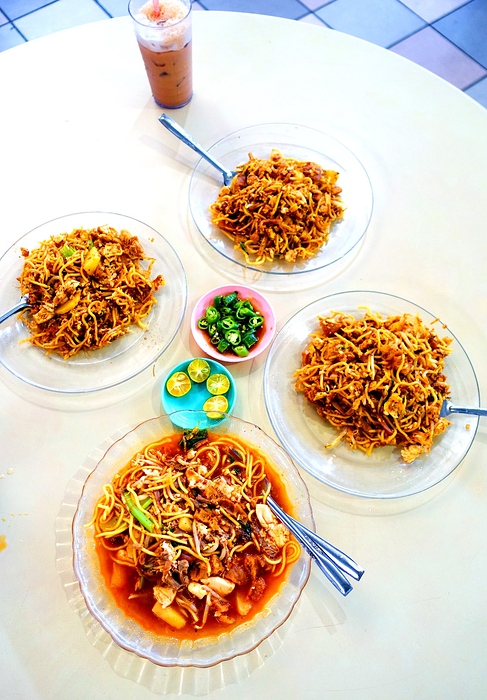 Mee Goreng - the dish had a light texture, and was very flavoursome compared to his nephew’s bland one at Larut Road. 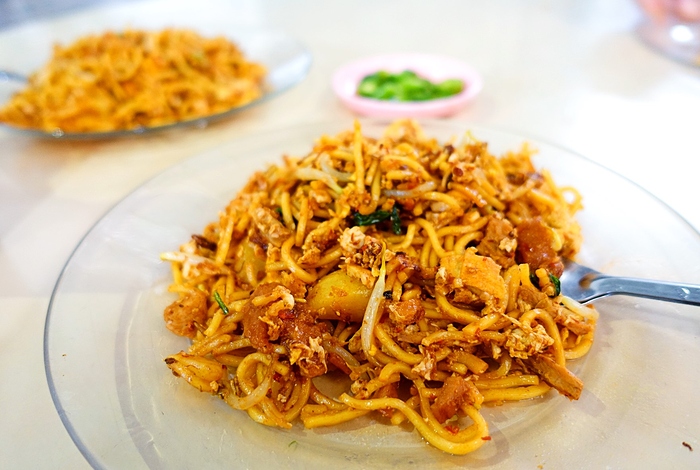 Mee Masak, called Mee Kuah here - again, the Manja brand of this noodle dish is much blander than the renditions at other top Indian-Muslim noodle places. But Chef Shah’s version is still tastier than the Larut Road one by Chef Farid. 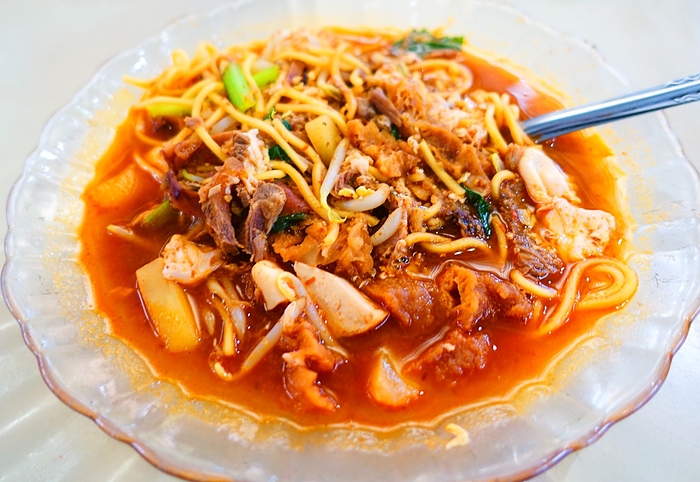 I rather enjoyed my meal here much, much more than the Larut Road one. Definitely coming back again soon. 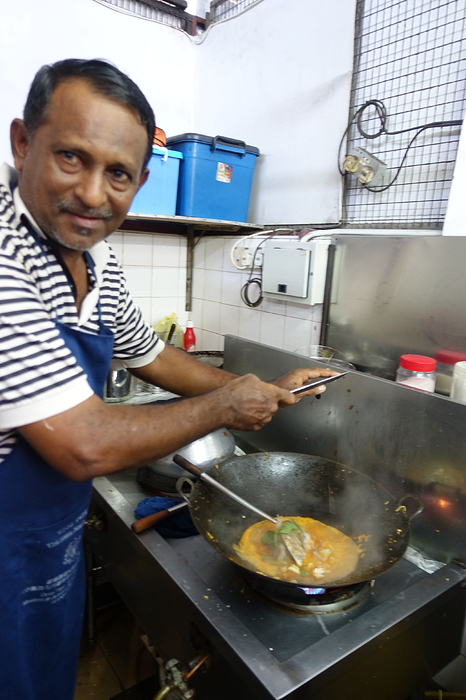 We found probably the best Mee Manja in town the other evening. It was Mee Manja in Jelutong, run by 69-year-old Amanullah, the eldest son of the legendary Nagoor Meerah of Mee CRC fame. 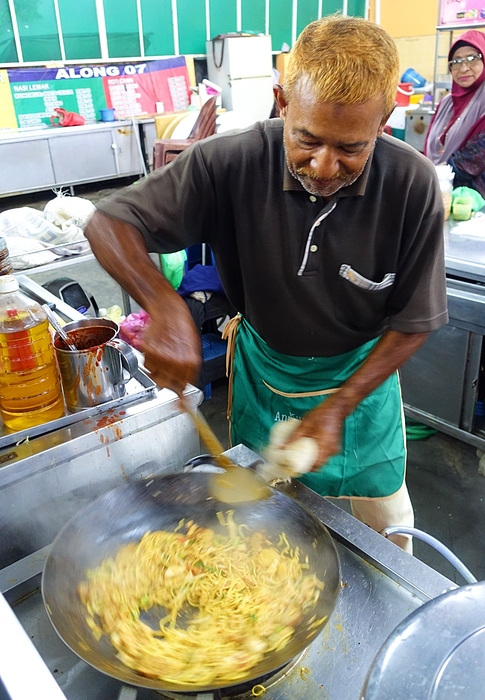 The Manja clan’s signature mee goreng is paler in colour than other renditions around town, lighter in taste and less spicy. A small dish of cut green chilis in soysauce, and half a calamansi lime is provided, so the diner can add those to the noodles according to one’s preference. 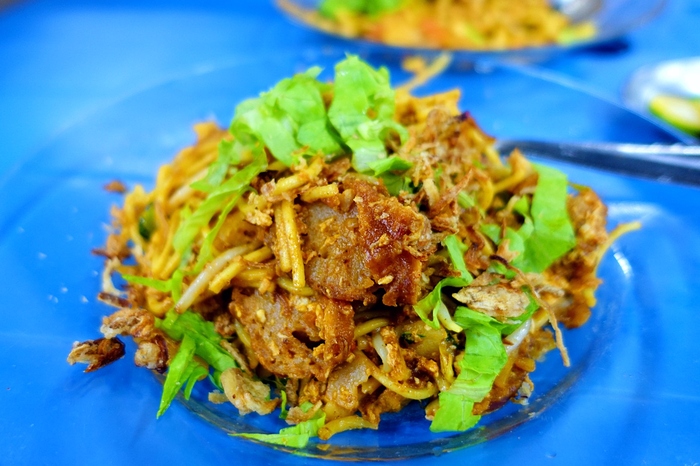 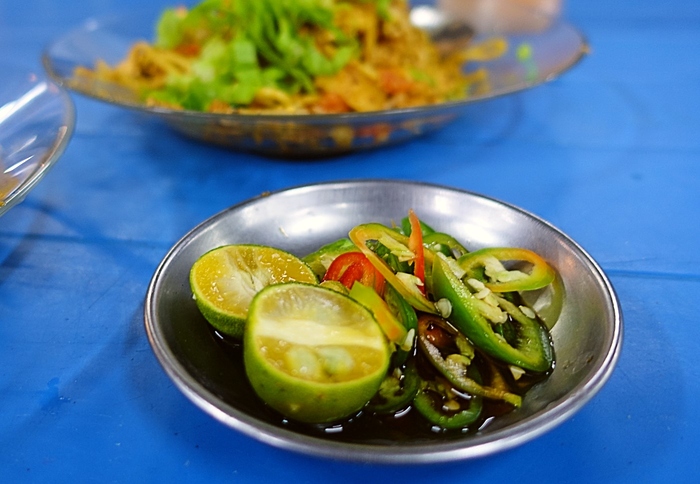 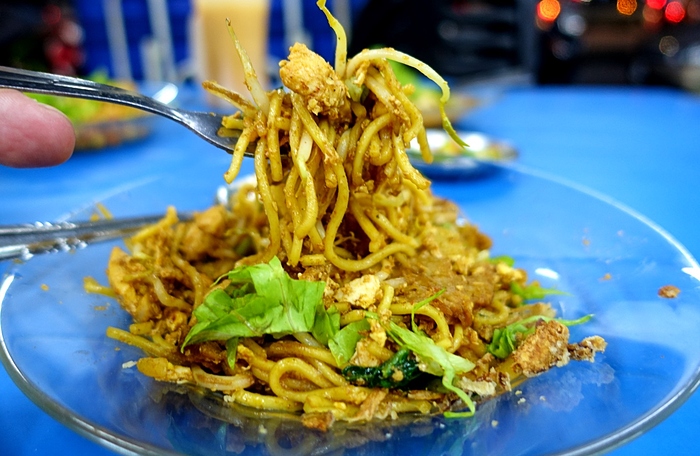 Amanullah also offers mee masak, where the par-boiled noodles are covered in a braising sauce/gravy, similar to mee rebus or mee kuah in other places. 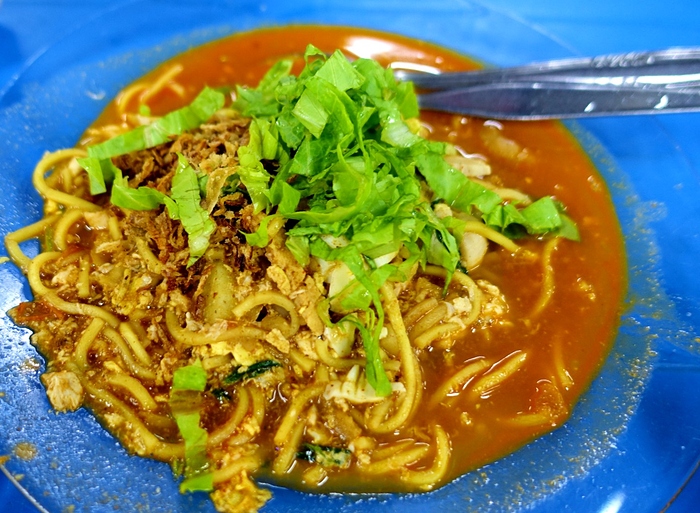 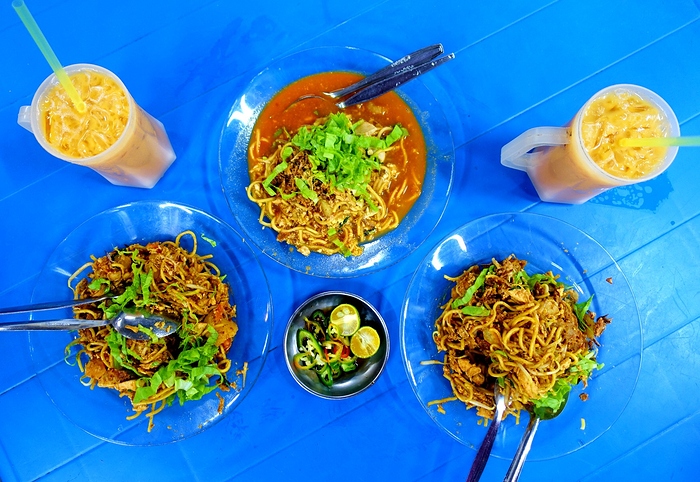 Amanullah’s got more than 50 years of experience in frying their Manja family’s mee goreng, and it really shows in the full flavours of his mee goreng. Nagoor Meerah has 9 offspring - 8 sons and 1 daughter. To my knowledge, only Son No. 1 Amanullah here in Jelutong, and Son No. 5 Shah Jahan in Bayan Baru, still carry on the family tradition in their generation. 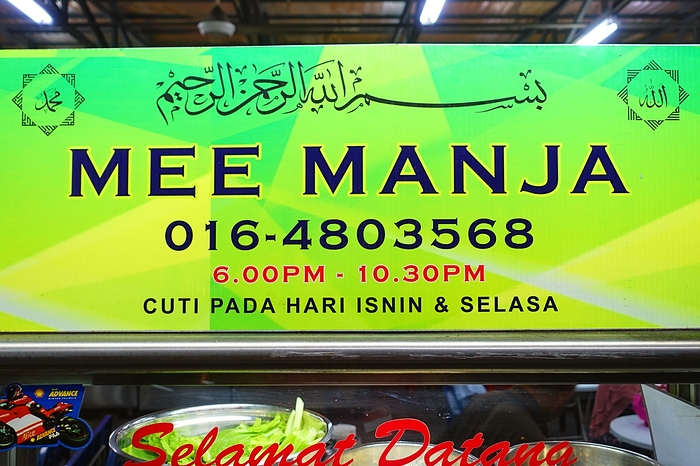 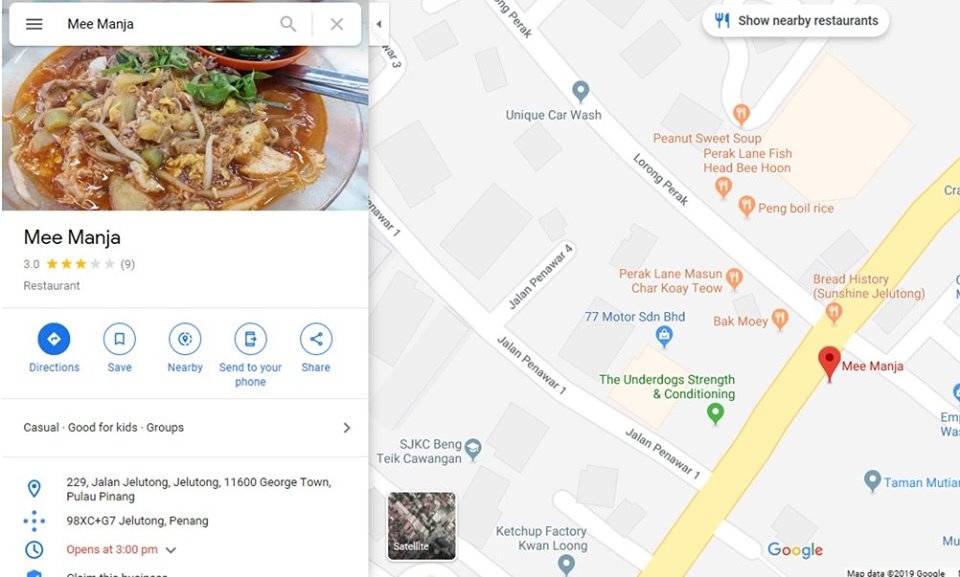 Just came across this old photo circa 1990 at the Penang Heritage Trust’s archives last week. 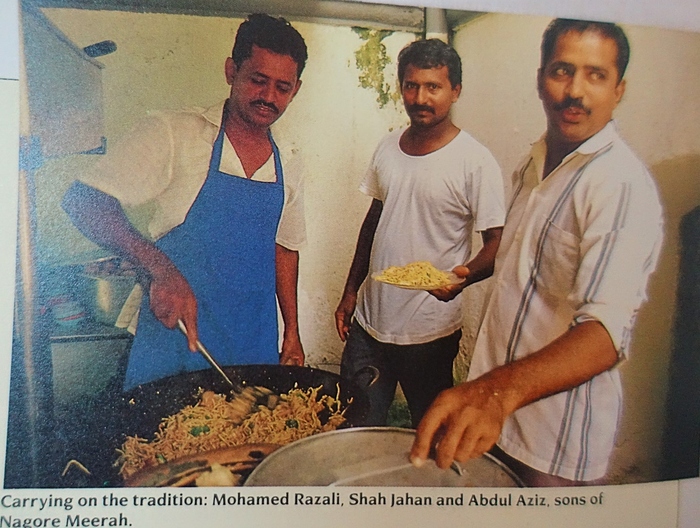