In Indonesia, “terasi” (shrimp paste) is added, whereas in Penang, “hae koe”, a thick, very strong-smelling, local shrimp sauce, is added to the dressing. Penang-style “rojak” is one of the most popular hawker treats which visitors from Singapore or other Malaysian states look for when they visit Penang.

In Penang itself, the town of Bukit Mertajam, located half an hour from George Town, across the Penang Straits, is also well-known for its competing rojak stalls.

Rojak Orang Hitam Putih, which started in 2007, is one of the most popular rojak stalls in Bukit Mertajam. The stall name, in Malay, meant “Black & White Man Rojak”. 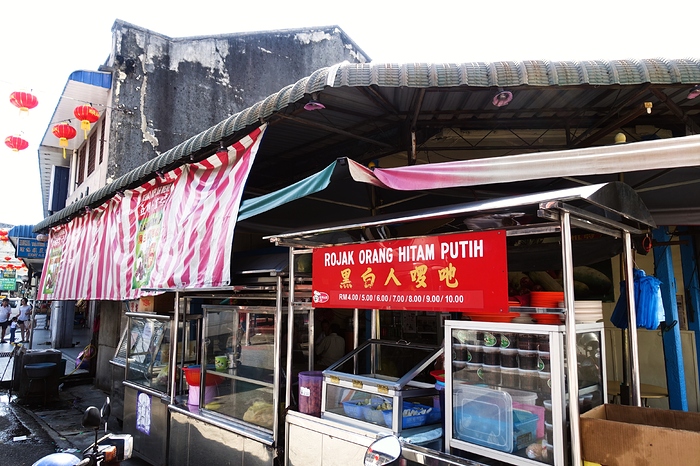 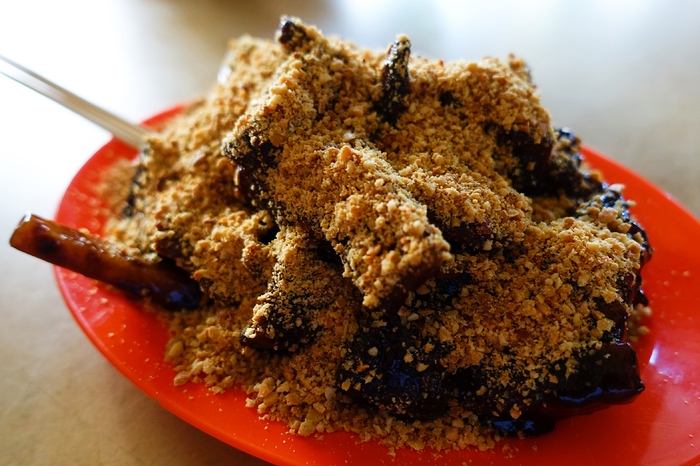 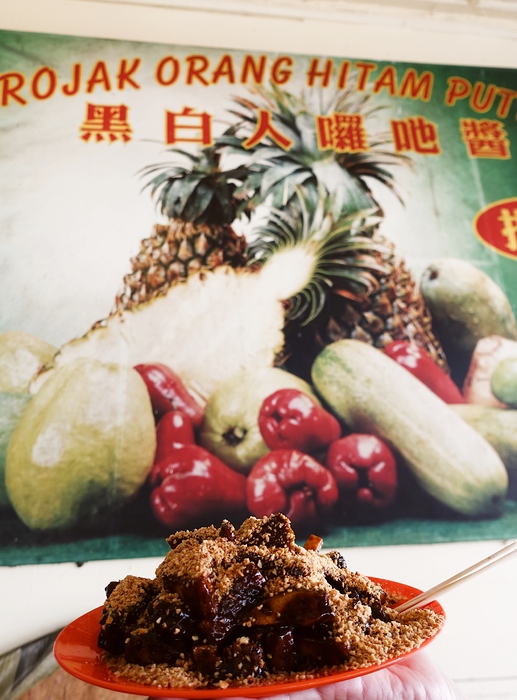 Jalan Teh Cheok Sah, near the junction with Jalan Pasar & Jalan Bunga Raya, where all 3 well-known rojak stalls are located, is a veritable rojak battlefield in Bukit Mertajam!

As for the strange nicknames for the 3 stalls, it all stemmed from one man. Teng Ah Hock, who is the original rojak vendor in Bukit Mertajam. He is 70-years-old now, and has been selling rojak on the streets of Bukit Mertajam ever since he was 22, i.e. back in 1970. As he was very tanned, the customers referred to him as “Or Lang Hock” (Dark-skinned Hock), which later became “Orang Hitam” (Malay for “black man”) Rojak or even “Orang Hock Rojak” (a mispronunciation of his nickname). 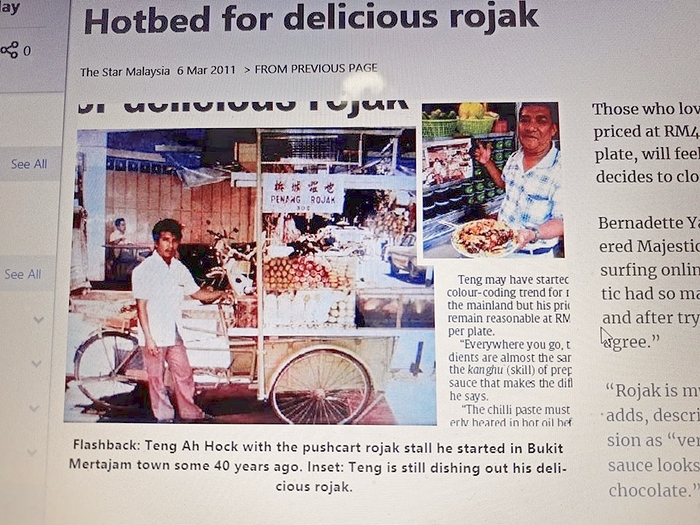 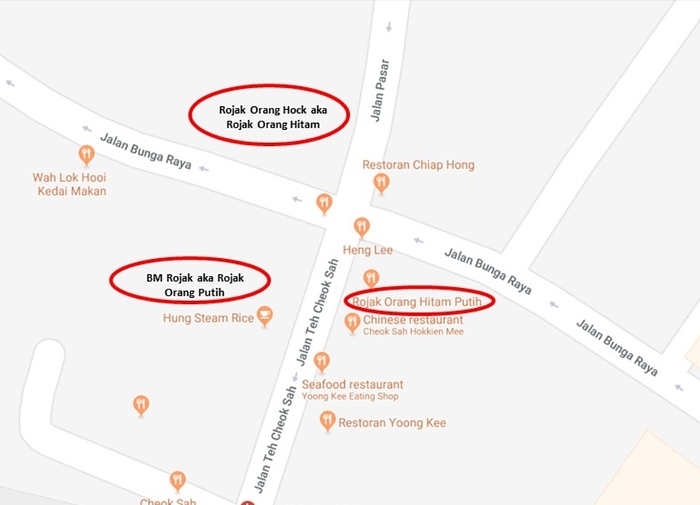 Back in Bukit Mertajam on the mainland part of Penang yesterday when 30 of us members of the Penang Heritage Trust (PHT) made the 30-minute journey across the Penang Bridge to visit the historic little town. 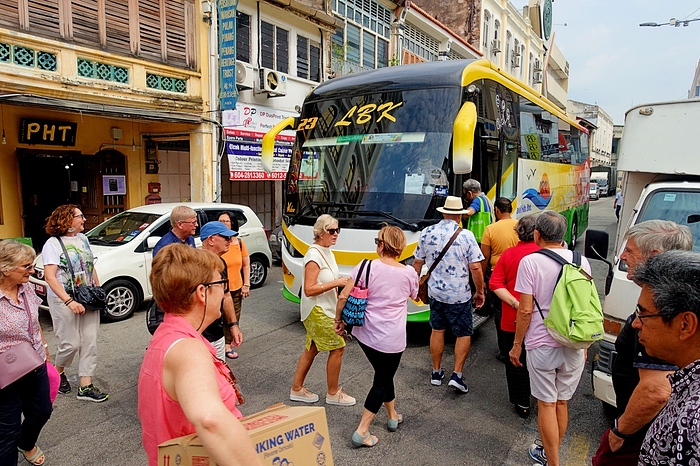 The 13.5 km-long Penang Bridge links George Town on Penang Island to Butterworth on the mainland part of Penang. 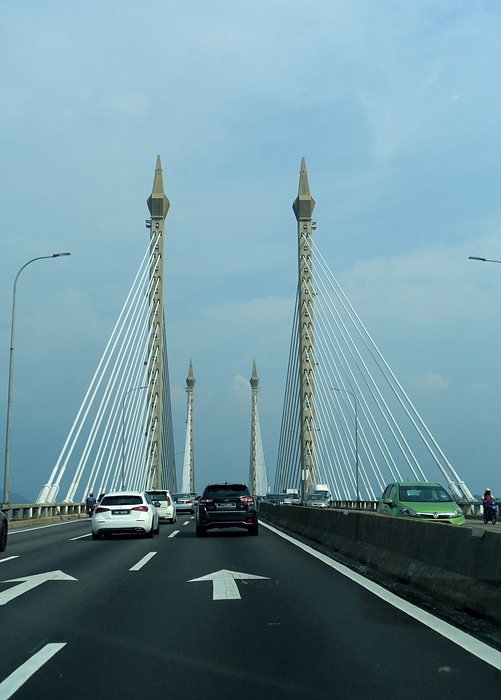 We arrived at Bukit Mertajam after 4pm, which was great, as we finally got to try the oldest stall in town, the 50-year-old Rojak Orang Hock, as it is popularly known among locals. It’s actually a Malay mispronunciation of his Hokkien nickname “Or Lang Hock”, meaning “Black Man Hock”, which the rojak vendor, Teng Ah Hock, is known by as he is very dark-skinned for a Chinese. He only opens his rojak stall at 4pm each day, and operates into the late-evening. 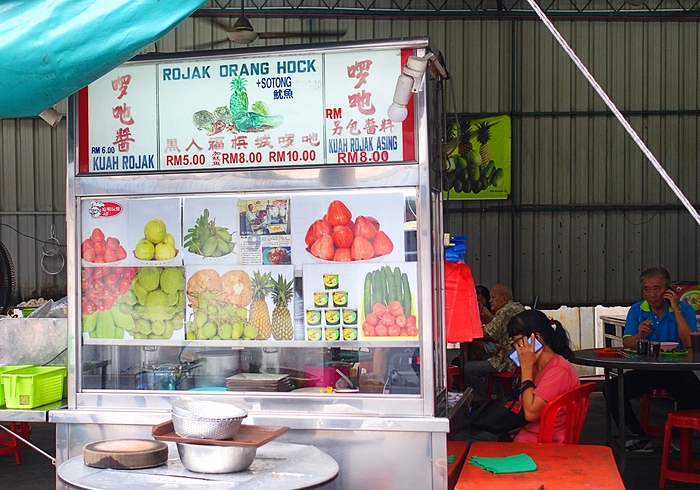 The legendary rojak-man, Teng Ah Hock aka “Or Lang Hock” himself! 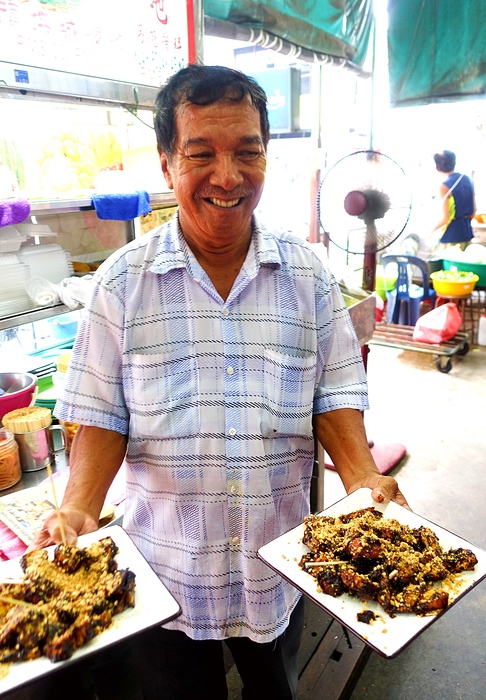 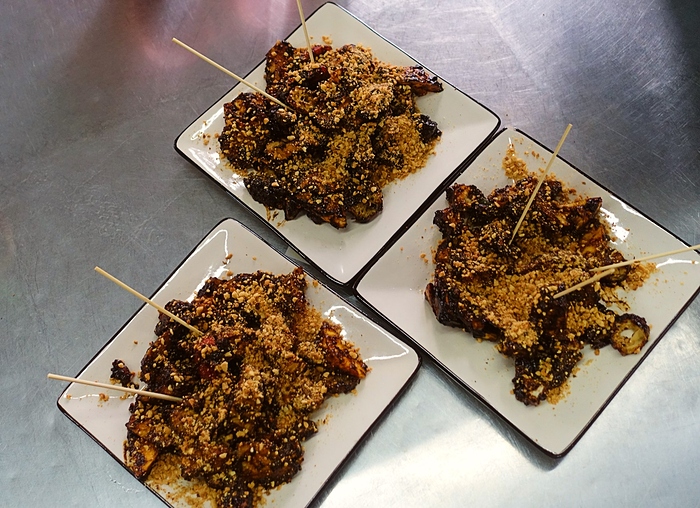 Bukit Mertajam is a bustling little town of 14,000 with a mainly Teochew/Chaozhou/Chiuchow population, in contrast to the mainly Hokkien/Fujianese population of George Town/Penang Island. 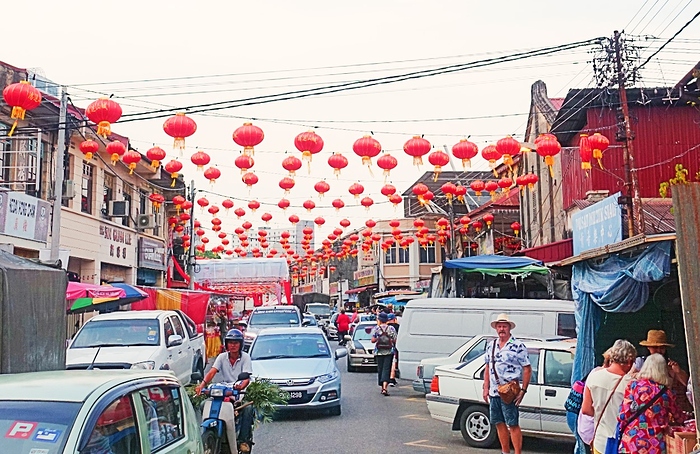