Lorong Selamat has long been synonymous with having some of the best Penang “char koay teow” on the island. There is a long-running rivalry between two stalls there, and one of them is known as the “Man in Black Goggles”, located at Low Eng Hoo Café, now renamed KTG Café after a recent change of owners. 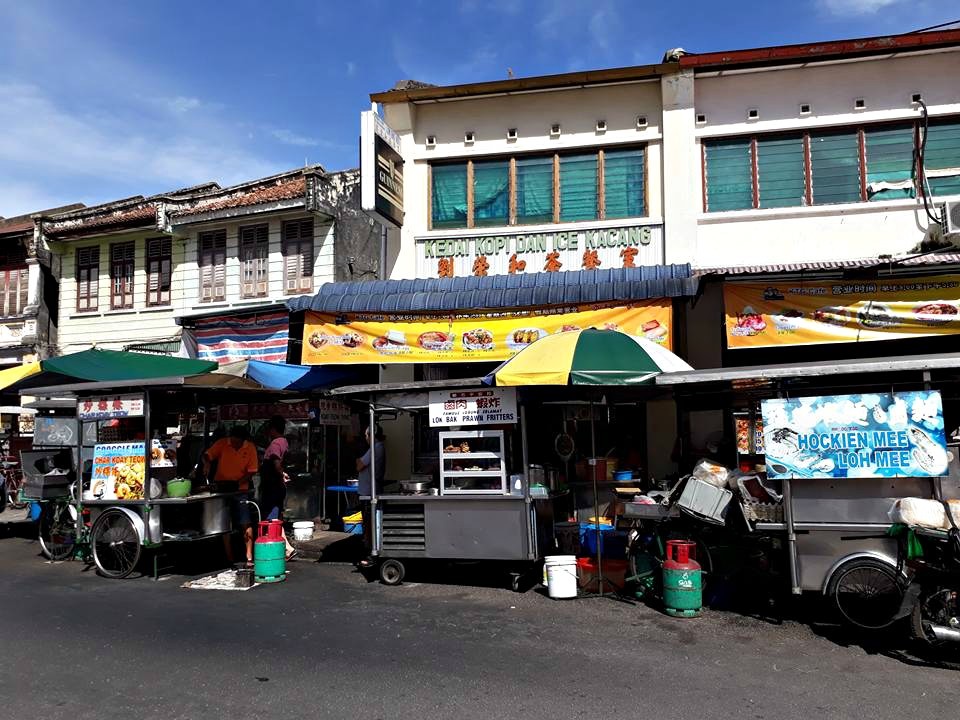 Other than a change of closing days - now Thursdays instead of Tuesdays previously, the food stalls there are unchanged, with the irrepressible self-proclaimed “Googgle Man” (sic) still churning out some of the best “char koay teow” in the business. 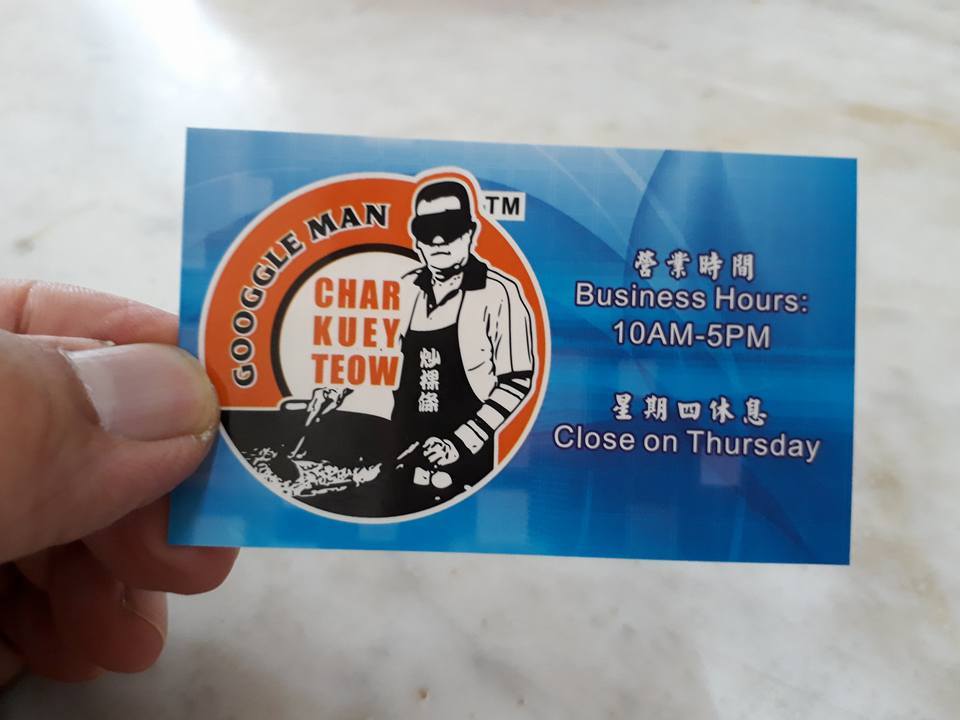 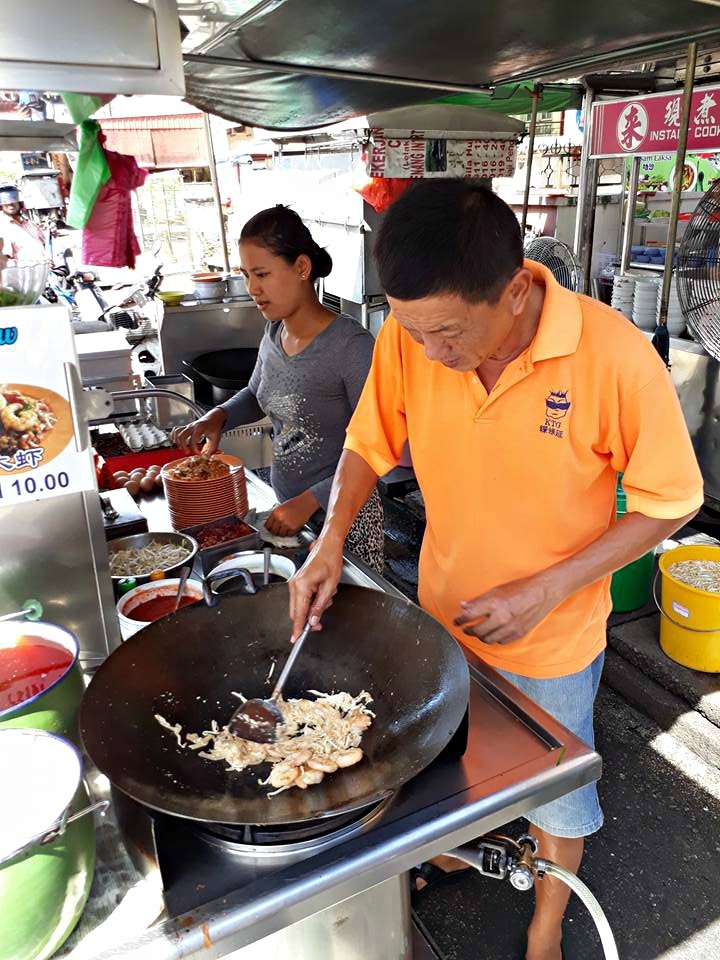 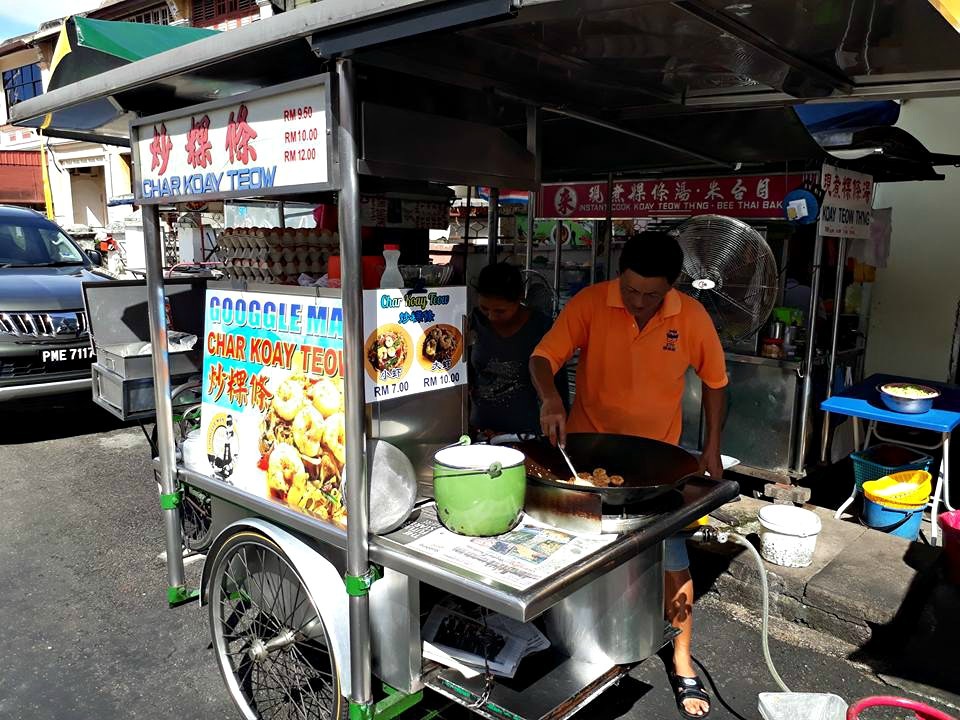 Prices have gone up & up, but still very affordable: 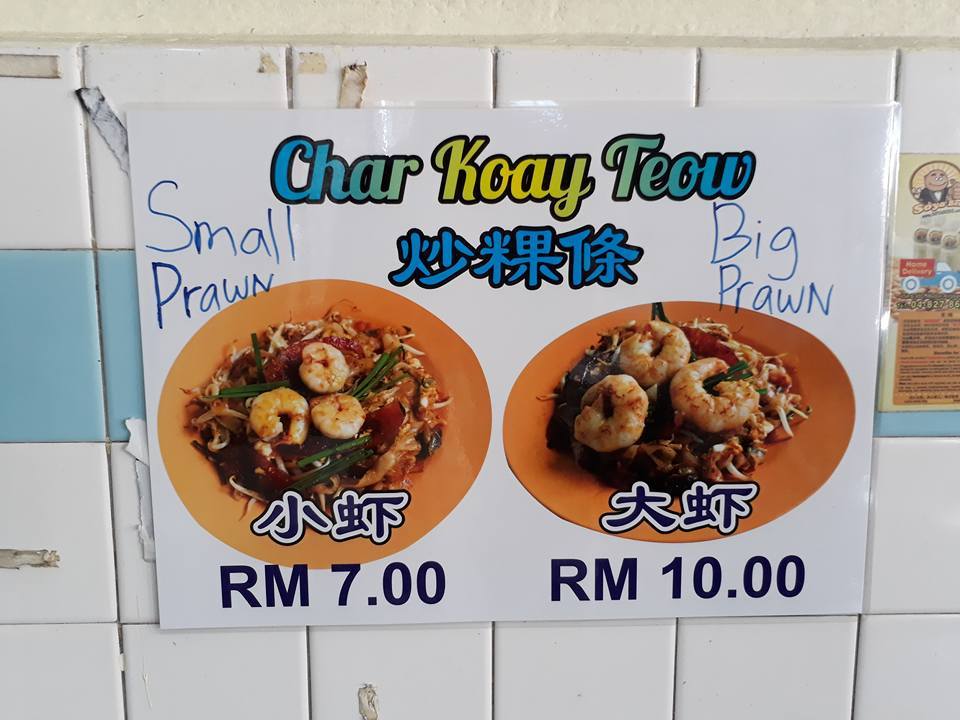 Still, some of the best “char koay teow” one can find in George Town: 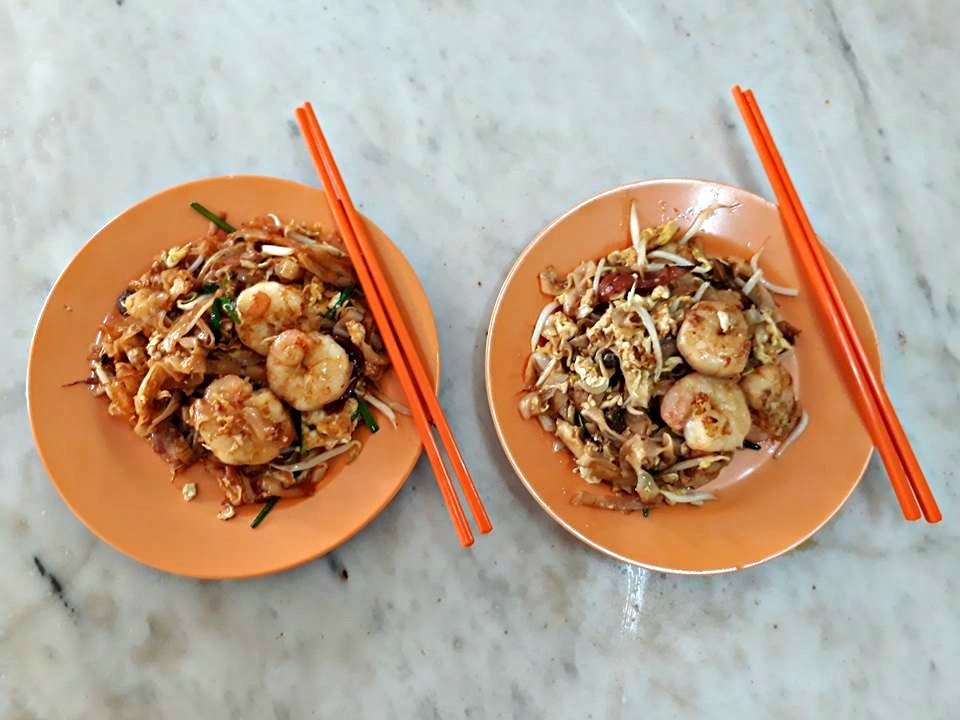 “Char koay teow” fried with chilli paste, the way most Penangites love it: 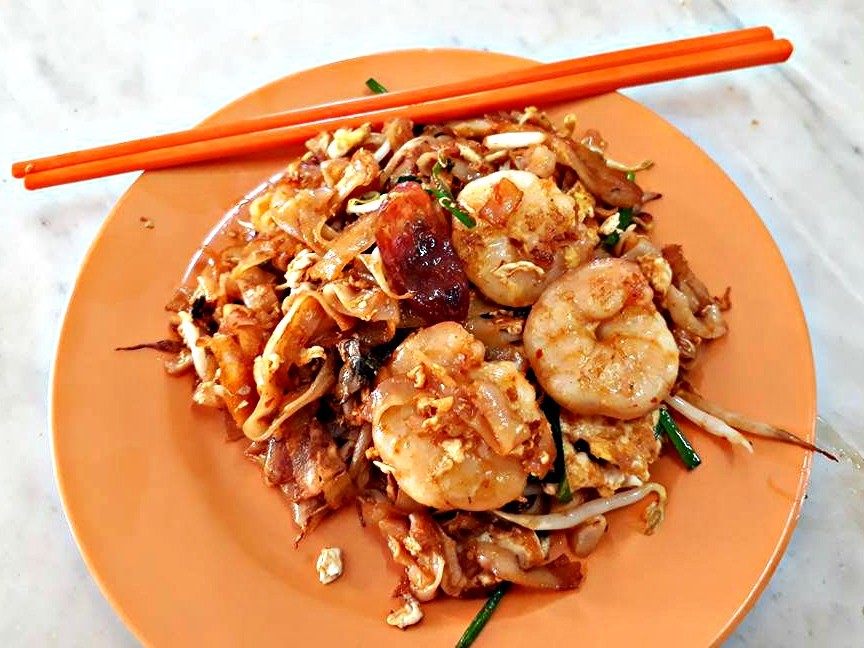 I personally prefer mine without chilli paste - still as tasty, IMO, but will lack the spike of chilli heat most “char koay teow” connoisseurs felt is indispensable. Another must-have at KTG Café is the “lor bak”, which is Penang-speak for “ngoh hiang bak” (in Hokkien) or “wu xiang rou” (in Mandarin), the Fujianese 5-spiced meat rolls which are popular in places with large Fujianese/Hokkien populations, i.e. Taiwan, Singapore, Indochina, Indonesia, etc.

“Ngo hiang” meat rolls are essentially pork marinated in Chinese 5-spice, then mixed with chopped water-chestnuts, carrots, onions, garlic, tapioca flour and other condiments, before being wrapped in beancurd sheets and deep-fried. The meat rolls are traditionally served in large wedding banquets as an accompaniment to Hokkien “lor mee” - yellow wheat noodles (“mee”) covered in a tasty, unctuous gravy (“lor”). Often, the dinner guests would dip the meat rolls (served crisp and scalding-hot from the deep-fryers) into the “lor mee”'s gravy to cool down the morsels before eating - which gave rise to the practice of having a dip to accompany the meat rolls, with or without the noodles.

Beside the “lor” dipping sauce, one also gets a bowl of red chilli sauce dip. 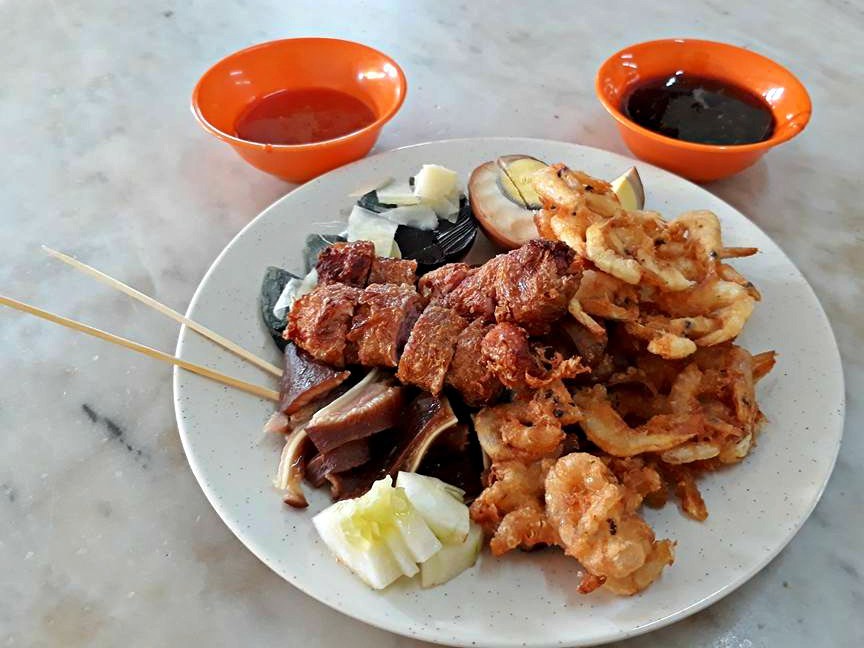 This stall at KTG Café has a reputation of serving perhaps the best prawn fritters in town - perfect golden crisp-fried discs of crunchy shrimps. 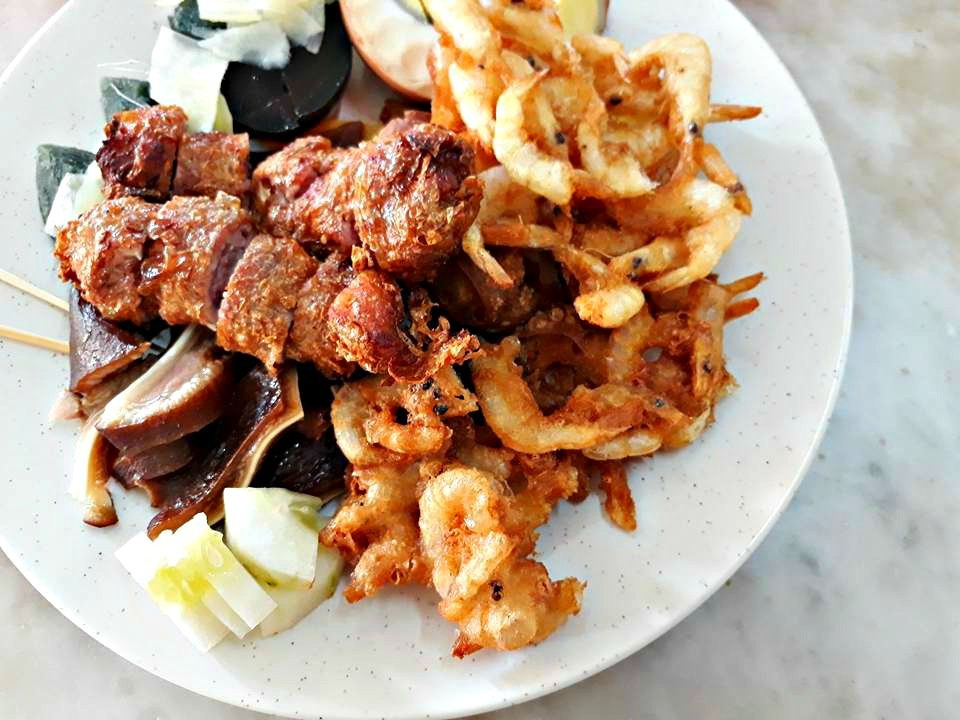 This stall also includes “lor too hee” - braised pig’s ears, which is a traditional item in a “ngoh hiang” spread, but harder to find these days. 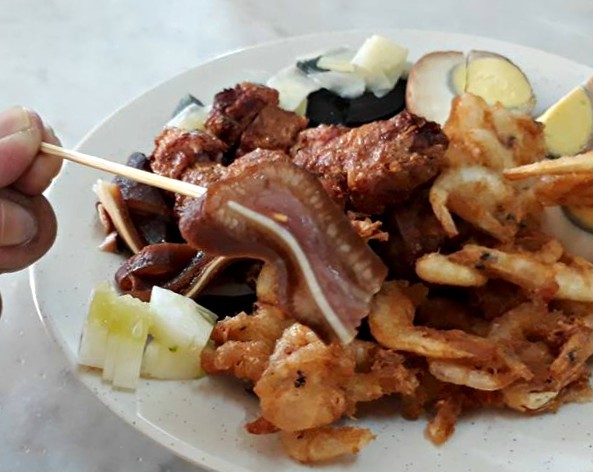 Only in Penang is this dish called “lor bak”, whereas it’s known as “ngoh hiang” (short-form for “ngo hiang bak” or 5-fragrance pork) or “wu xiang rou” (in Mandarin) in Singapore, Taiwan, and even other parts of Malaysia.

Penang’s “lor bak” tend to have lighter and subtler flavours when compared to the traditional “ngoh hiang” which we still find in Singapore - below is the “lor bak” from KTG Café and “ngoh hiang” from Hup Kee @ Maxwell Road Food Centre (one of the oldest in Singapore):

Comparatively, there is no mistaking the “Penang” characteristics of the “lor bak” when one puts KTG Cafe’s version, known in local Penang circles as the “Lorong Selamat lor bak”, next to its rival for the “best lor bak in Penang”: the one from Kheng Pin kopitiam on Sri Bahari Road. 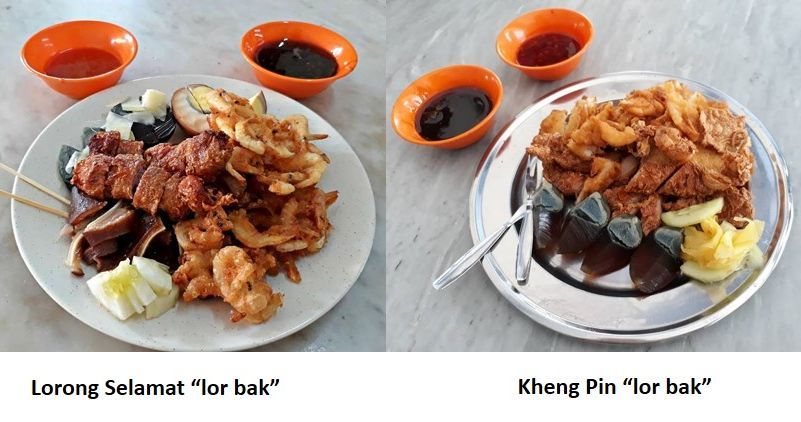 Besides the savoury items, the ice-kacang dessert at KTG Café is a must-have - one of the very best in George Town. Not so its cendol, which has a much-too-diluted coconut milk sauce, and relatively poor quality gula Melaka (palm sugar). 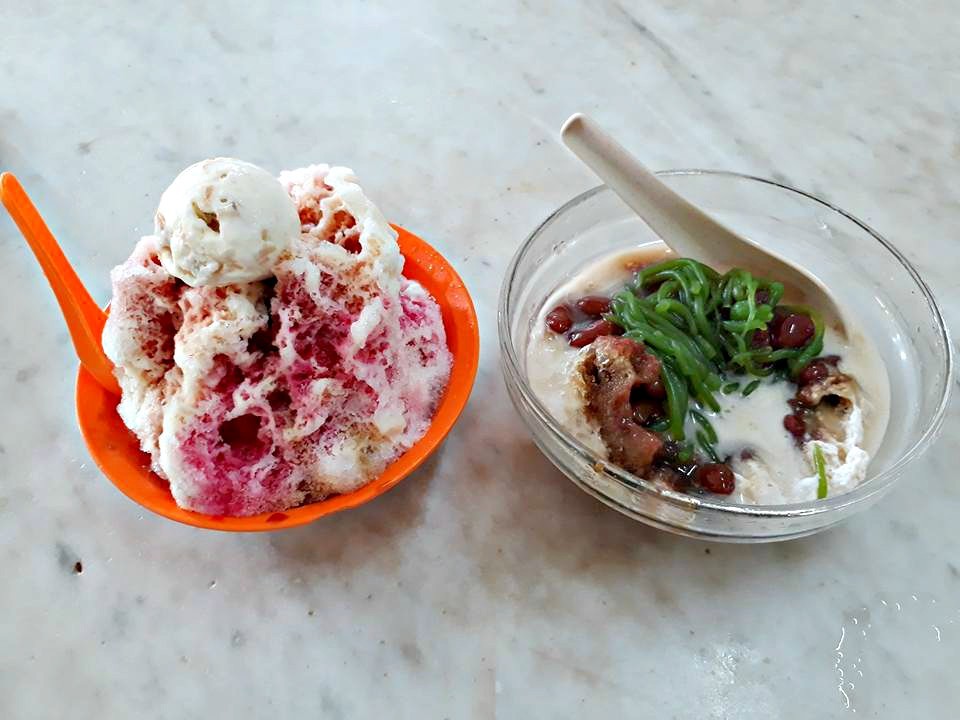 We call her “The Lady in Red Beret”, as she’s more recognizable by her large red beret-like hat. Personally, I much prefer her version. I’d rate hers 9.5/10, whereas the Google Man is perhaps 8/10.

Oops wrong description, thanks for correcting.

Sgee - you’re not far wrong - the lady does don a pair of goggles, too, when she’s frying.

I will say that Goggles CKT, with the duck eggs and the big prawns, is the best plate of CKT I have ever eaten in my life – full stop. And you don’t have to deal with the attitude of the red hatted Aunties.

Klyeoh, thank you so much for your wonderful posts on the Penang food scene! My friend and I are currently in the city and are having a wonderful time eating out by following your recommendations. Your posts have really given us an excellent guide to the wonderful foods of the city and a great understanding of what the food is and the context behind it. We intend to head to Lorong Selamat to find the “Man in Black Goggles” and “Woman in Red Beret” tomorrow for char koay teow.

If you have time, we would love to meet up for some food sometime and learn about Penang from you, but if you’re busy, we totally understand. Just wanted to say a big thank you!

Hi wokhei - glad to hear you’re having a good time in Penang. Unfortunately, I’m currently in the UK - I am in London today but am going to Cardiff, Wales, tomorrow to catch the grand finals of the best opera singer in the world contest hosted by BBC Cardiff. Besides food-hunting, opera is another one of my great loves - and they are having a world premiere of Liszt’s lost opera at the night of the finals as well.

I’m only back in Penang late evening on 25 June. Are you still around 26 June onwards?

For salted fish in George Town, make a beeline for Chowrasta market - you should be able to find vendors there, or else people who can recommend good stalls to you there.