The Malay Street Koay Teow Th’ng is one of the most popular in Penang. Its Chinese signage says “Behind the Cow 113”, a reference to its address at No 113 Malay Street, which is known in Hokkien as “Tai Gu Au”, i.e. “Behind the Cattle Slaughterhouse Lane”. 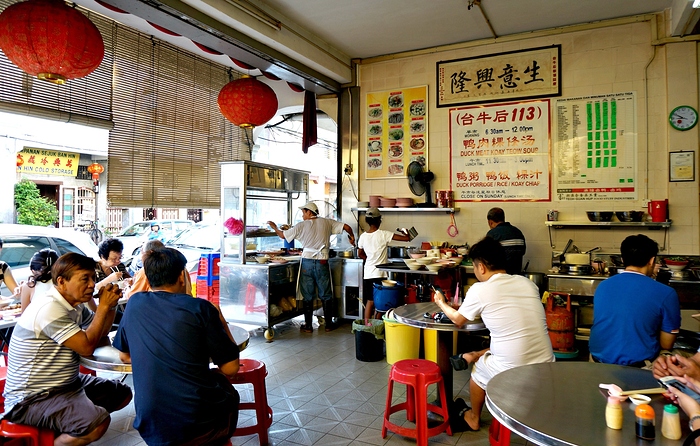 “Koay teow th’ng” is one of Penang’s most popular street food - a flat noodle in soup dish of Teochew/Chaozhou origins. It’s a popular breakfast dish, but can actually be eaten throughout the day. The noodles are usually blanched first, then garnished with parboiled pork or duck-meat, sliced fishcakes, fishballs and a sprinkling of chopped scallions and some golden crisp-fried chopped garlic in oil. 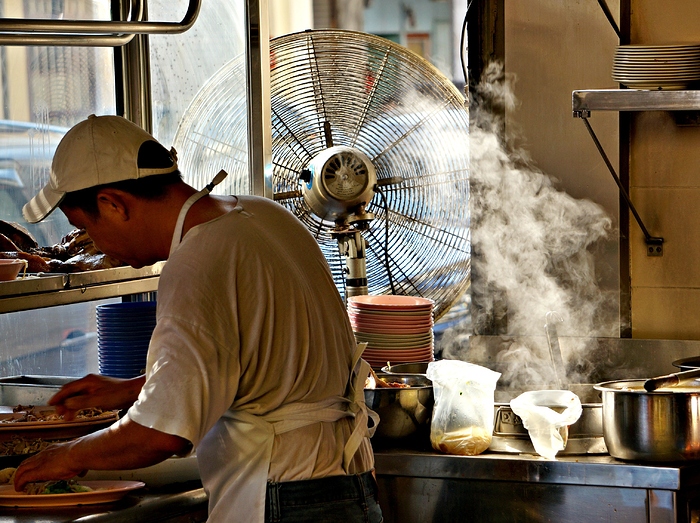 Ong Choon Chuan is a second-generation hawker at this stall started by his father over 50 years ago. They moved to this current location on 113 Malay Street just a decade ago. 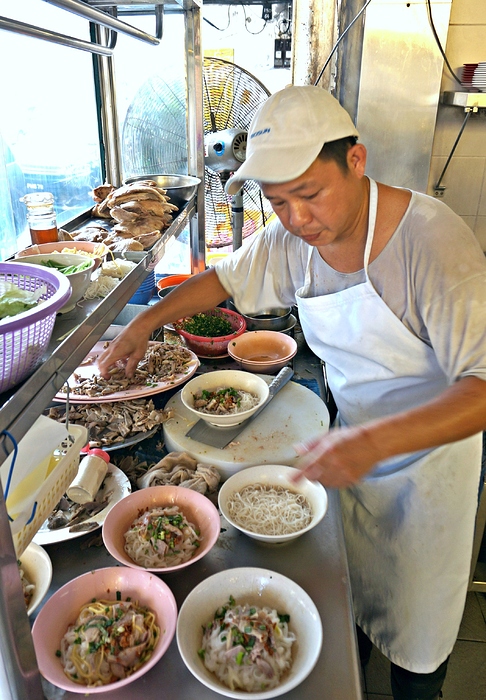 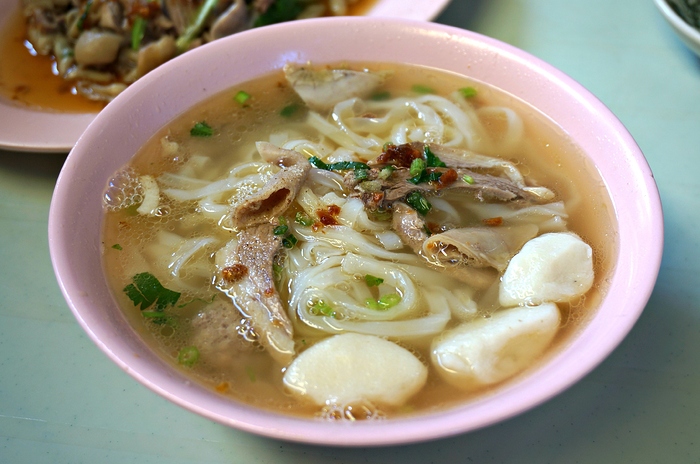 The version at Malay Street also allows the diner to order side-dishes of braised duckmeat, or duck organs. We ordered a platter of duck livers, duck intestines and other organs, in light duck fat, soy-sauce, oyster sauce, sesame oil dressing. 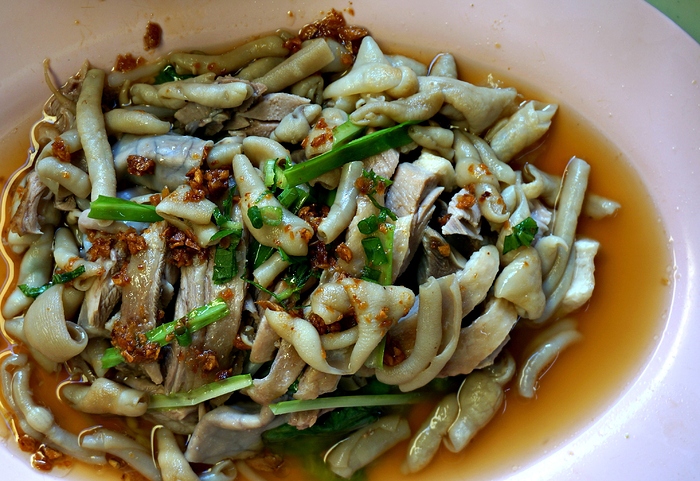 Come early here, as the place is usually packed to the gills by mid-morning. Place your orders with the chef, Ong Choon Chuan, directly - he’s perpetually busy but will remember your order with his amazing memory.

Looks really good. I need to connect with you when I ever visit Malaysia!!!

Any time - always happy to show fellow foodies around. 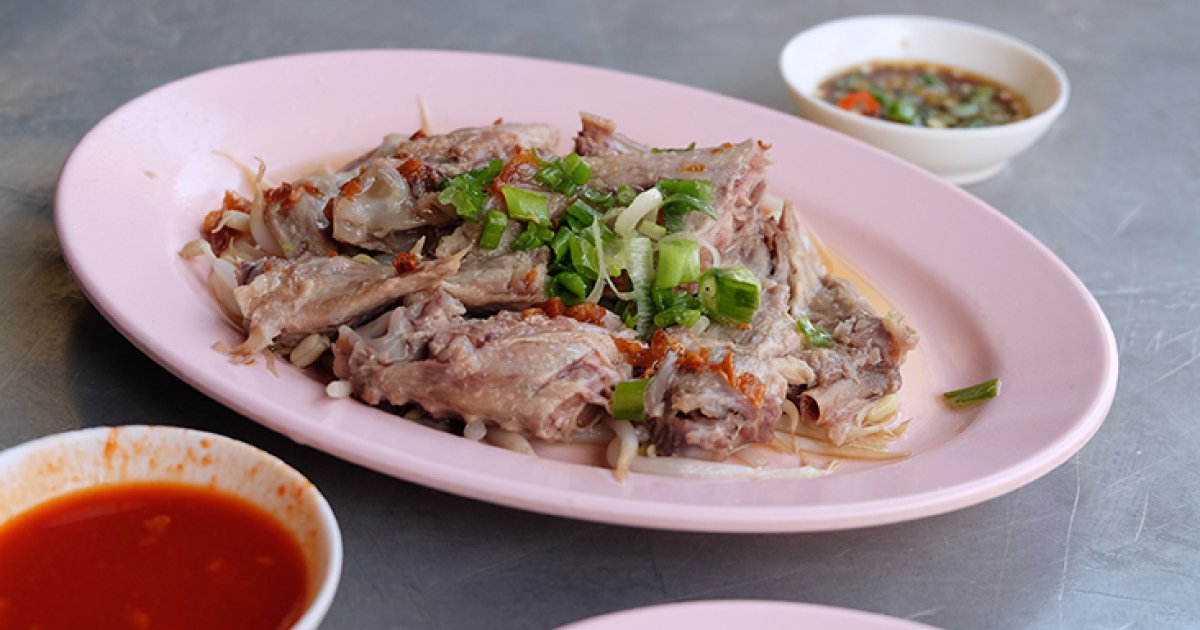 GEORGE TOWN, JAN 6 — Fancy some boiled duck intestines and braised duck wings? Or how about some braised pigs' large intestines that is so buttery soft, it almost melts in your mouth? These dishes may sound "weird and exotic" but to many living in...

Nice soup. I am fond of noodle soup with (fish) balls. I remember eating meat filled fish balls in Fujian and places with a high concentration of Hakkas in Taiwan.

It must be so hot already in April. The cook is drenched in sweat. It’s only open until noon, I guess the rest of the day he has to make the broth?

I remember eating meat filled fish balls in Fujian and places with a high concentration of Hakkas in Taiwan.

Oh yes, among the Fujianese-Chinese, we recognise meat-filled fishballs as being a Foochow/Hockchiew dish. Historically, Fuzhou, despite it being the capital of Fujian province, is rather isolated geographically from other parts of Fujian, and its local Foochow dialect (福州話) which is Eastern Min, is very different and unintelligible to us Hokkien/Minnan/Southern Min speakers.

The Foochows’ cuisine is also pretty distinct: their oven-baked meat-filled pastries, their use of red rice wine in cooking, and, of course, their fishballs filled with minced pork.

In Malaysia, there are 3 towns which have majority Foochow populace: Sitiawan in Perak state, Yong Peng in Johore state, and Sibu in Sarawak, Borneo. Malaysians foodies actually go all the way to these cities to seek out Foochow specialties, like the “gong pian” (光餅), called “kompiah” in the Foochow dialect, which cannot be found outside those towns.

I have Foochow friends in Penang, and relish being invited to their homes for home-cooked Foochow meals!

I guess the rest of the day he has to make the broth?

As per the Malay Mail article, it seems like they simmer their broth overnight:

“Preparing the broth is the most important part… we have to start cooking at 6pm every evening and leave it to simmer over the embers of a charcoal stove overnight to get the rich, flavourful soup,” he said.

Thanks, Klyeoh. I always learn something new from you. I was in Fuzhou but only overnight.

I looked up “kompiah”. Thought it was popiah, but it’s not. 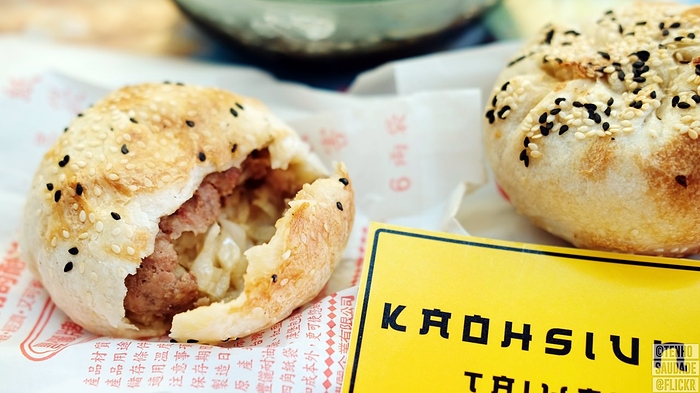 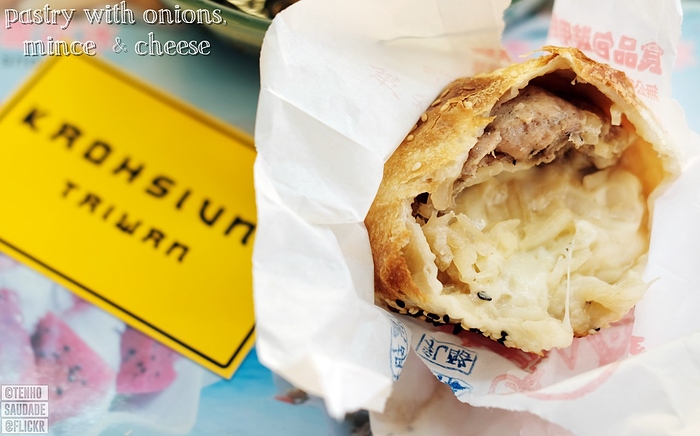 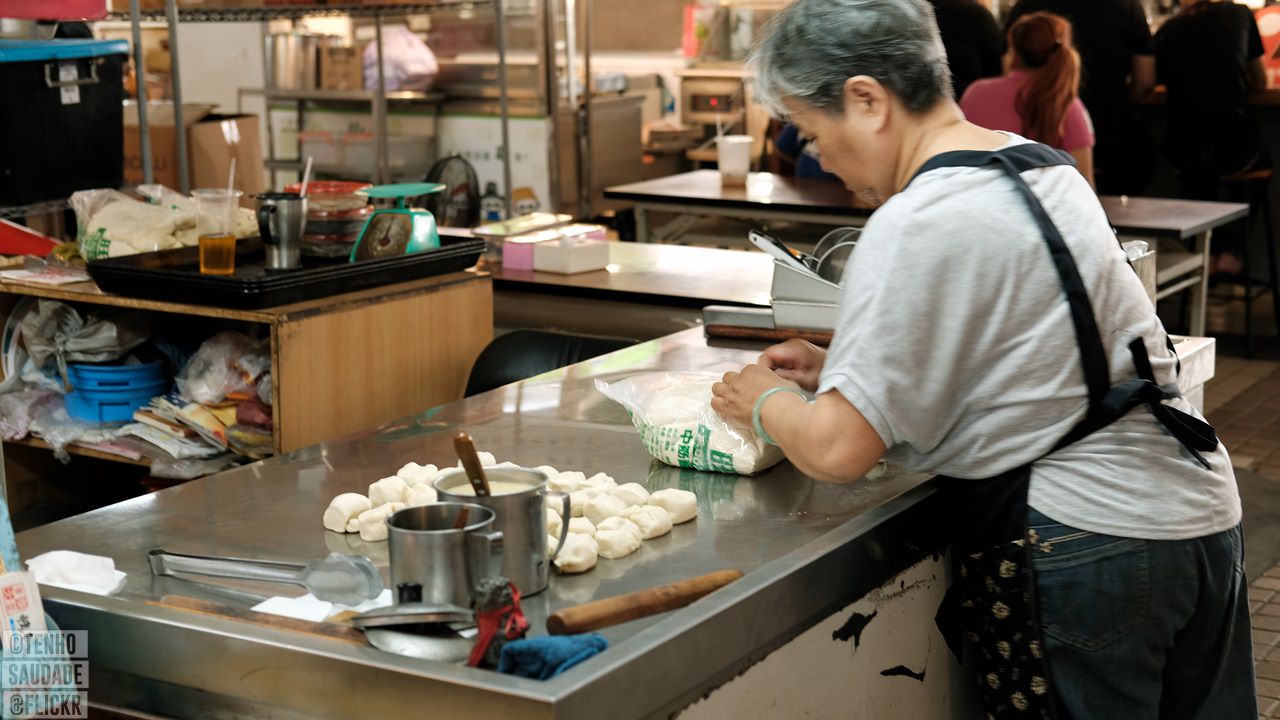 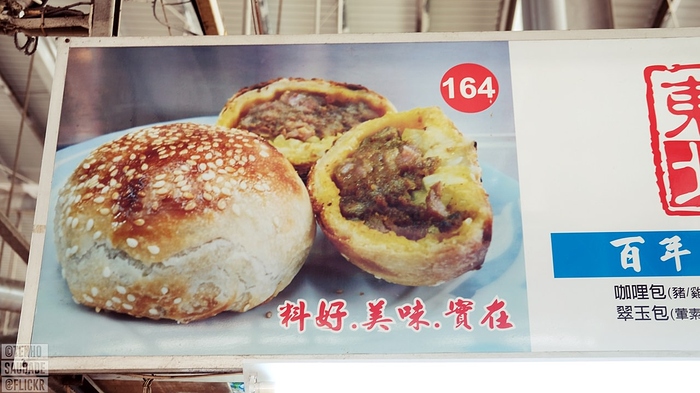 It’s called hújiāo bǐng (胡椒餅) and is similar to “kompiah”. It’s cooked in a clay oven similar to Indian/Pakistani “tandoor” or Central Asian “tandir” where it’s commonly used in Azerbaijan, Kazakhstan, Uzbekistan, etc. I surmise that this clay oven was first introduced to the Chinese by the Central Asian Uighurs or Mongols.

The “hujiao bing” I had in Kaohsiung, Taiwan, a few years ago: 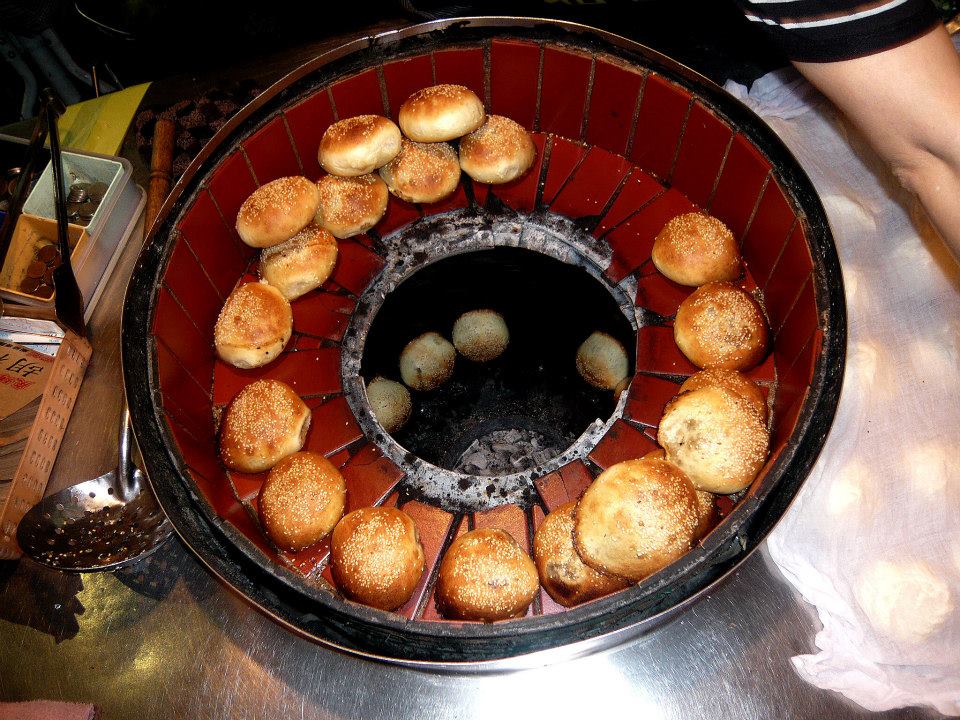 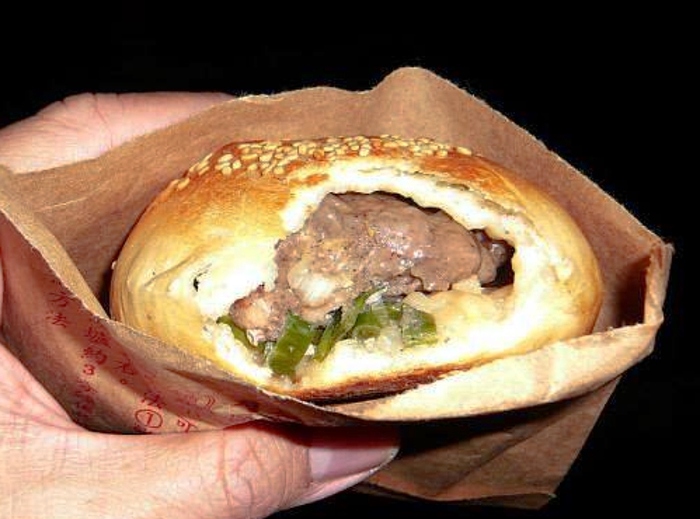 Conversely, the tandoor/tandir could have been introduced by Indian merchants/traders to Quanzhou during its golden era from the 11th- to 14th-century, whence it was a cosmopolitan trading port under the Mongol Empire, with Muslims, Hindus, Christians and Buddhists living side-by-side. 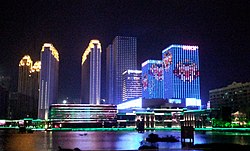 Quanzhou, formerly known as Chinchew, is a prefecture-level port city on the north bank of the Jin River, beside the Taiwan Strait in Fujian Province, People's Republic of China. It is Fujian's largest metropolitan region, with an area of 11,245 square kilometers (4,342 sq mi) and, as of 2010, a population of 8,128,530. Its built-up area is home to 6,107,475 inhabitants, encompassing the Licheng, Fengze, and Luojiang urban districts; Jinjiang, Nan'an, and Shishi cities; Hui'an County; and the Qu...

At 11am each day, Ong Choon Chuan packs up his koay teow thng business and turns his stall over to his father, 72-year-old Ong Tooi Hong, to start his koay chiap operations. 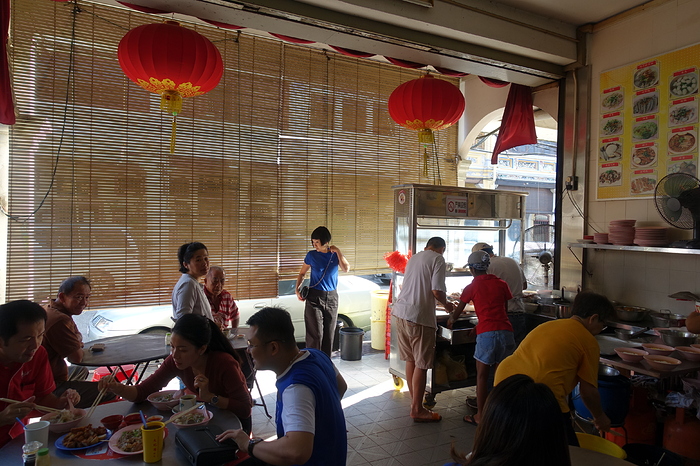 Koay chiap, like koay teow, is of Teochew/Chiuchow/Chaozhou origins. Basically flat, white rice noodles but, where koay teow is thin and narrow in dimensions, koay chiap is at least twice thicker, and much broader. Koay chiap is also served in a rich, deep broth, tinged dark-brown from the addition of light/dark soysauce and Chinese herbs. 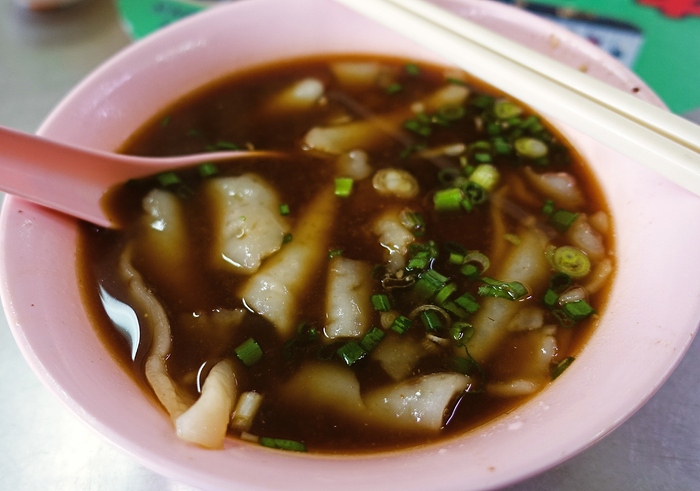 The koay chiap here is served similar to the style in Singapore, with bowls of noodles in soup accompanied by large platters of duck-meat, braised pig’s intestines, pig’s ear, pig’s blood, hard-boiled eggs and tofu. 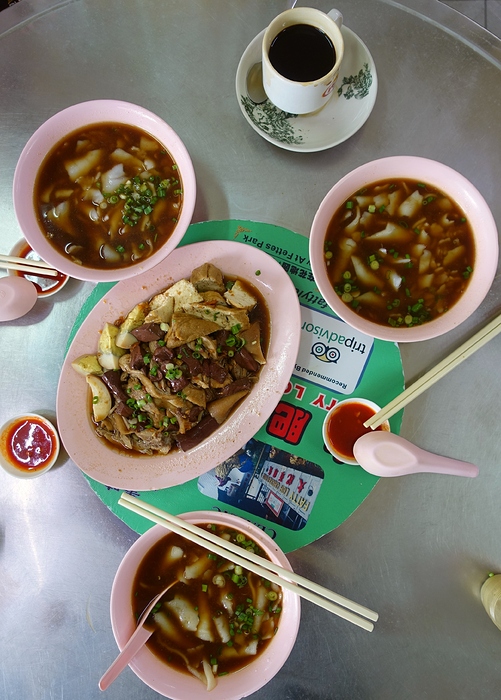 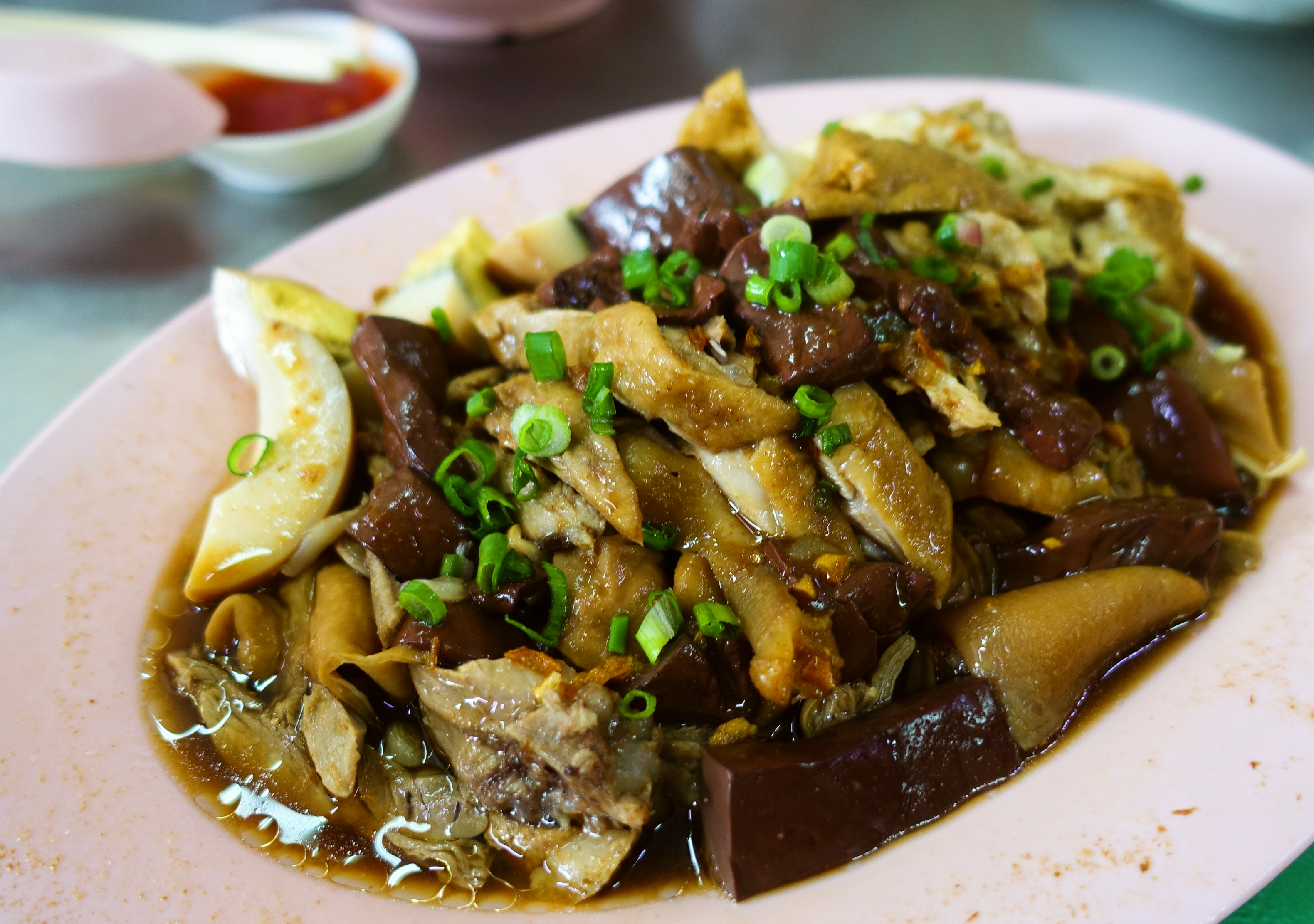 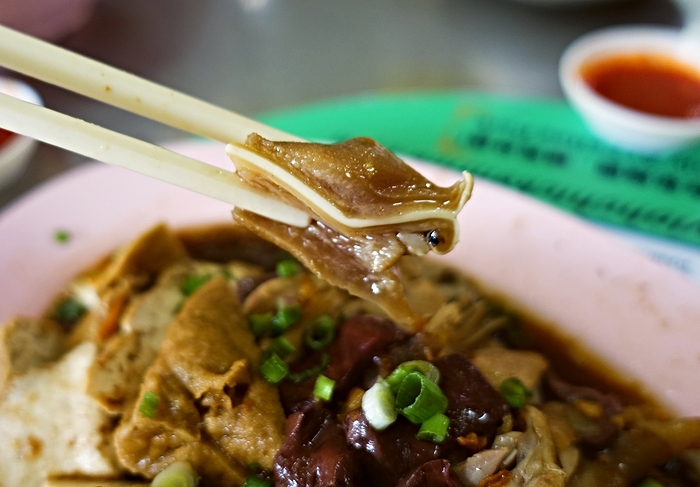 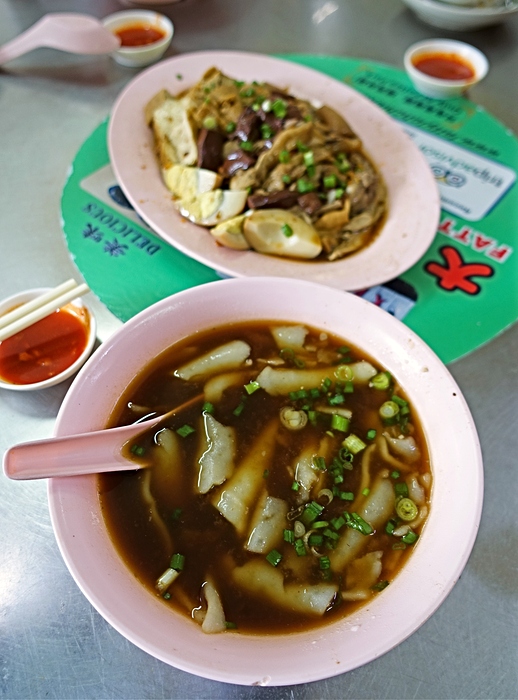 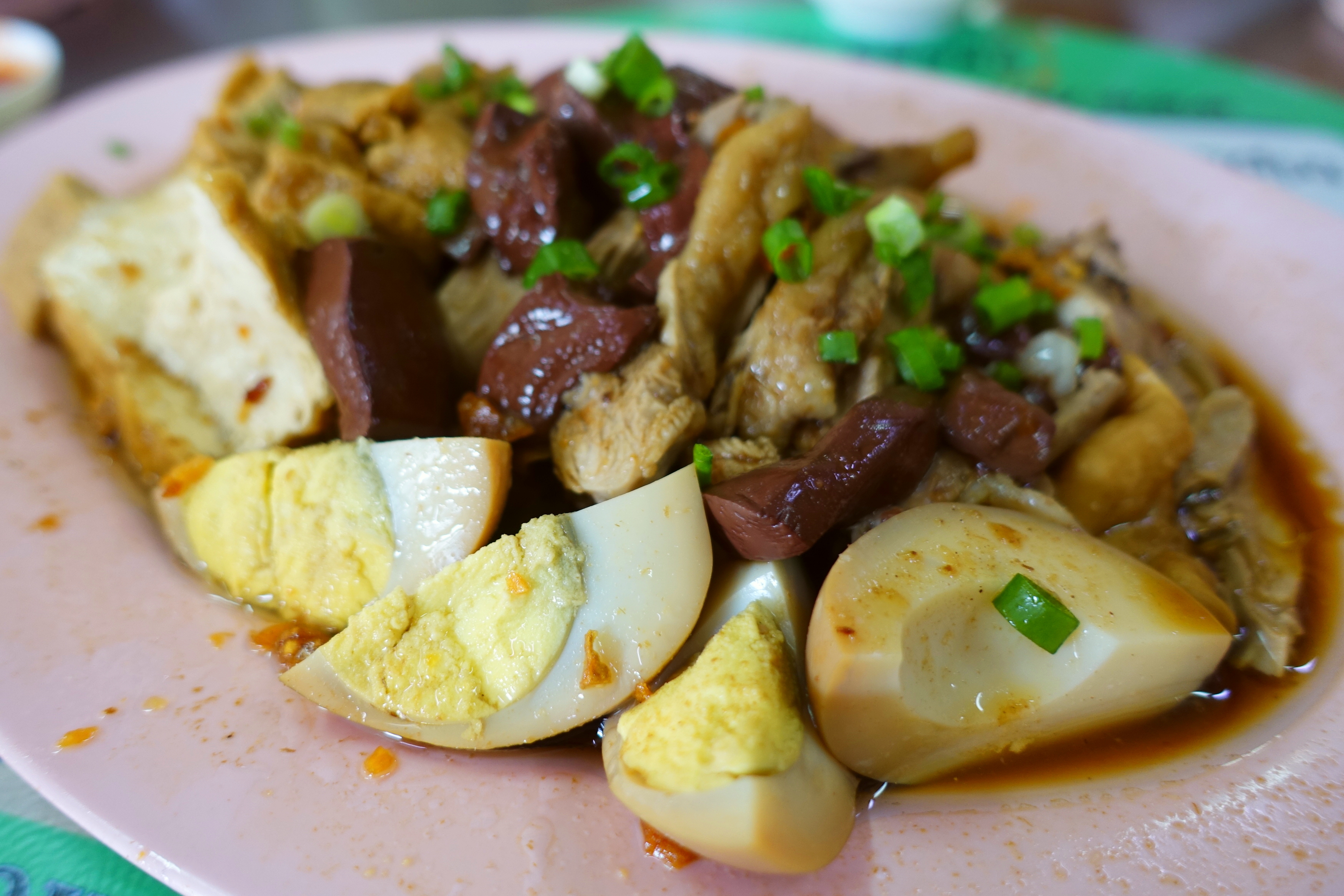 Come early - preferably before noon. The elder Ong operates till 3pm Monday to Saturday, but he usually sells out way before then.