A loss. His restaurant, Juniper, was the first Michelin starred meal we ever ate. And the first with a very small plates tasting menu - yes, we did seriously consider stopping to get a bag of chips on the way home. 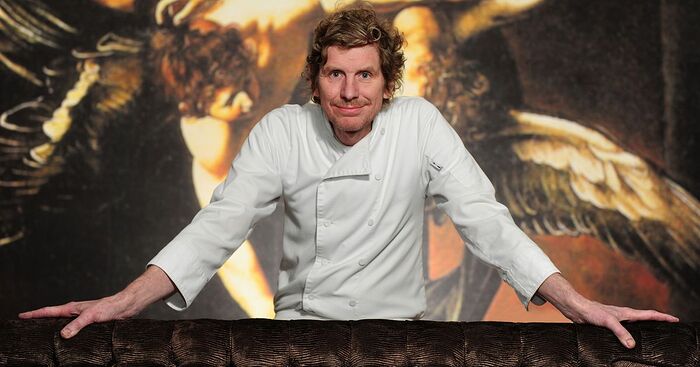 He was a chef trailblazer who won a Michelin Star at Juniper in Altrincham, before heading to Edinburgh to create the acclaimed 21212 restaurant

I only started writing about our restaurant meals in 2007 so have no record of the first meal at Juniper that I refer to above, which will have been 2005/6. Our last meal was in 2008, just before it closed, and it was, frankly, a shadow of its former self. Gone was the long tasting menu (not altogether a bad thing). I don’t seem to have posted it to eGullet, where I played for some time, so it must have been to the late Chowhound. Anyway, for the sake of posterity, here’s what I did write back in 2008.

It’s a couple of years since we were last at the Manchester area’s only Michelin starred place but thought we better get in there before Paul Kitching leaves for Edinburgh at the end of April. Cuisine is of the wacky Heston-esque variety – plenty of foams and odd flavour matchings.

I have the memory skills of a gerbil and in the absence of either an online menu or a real one that I could take away for reference, the following underplays the wackiness of some of the combinations.

However, tables are already set with a small dish of olives and another of those Japanese rice cracker thingies that posh restaurant serve instead of Walker’s crisps. Menus were perused – three starters and three mains, plus a “special” on each course. Orders were placed and, in due course, a shot glass amuse arrived – grape juice with smoked bacon. There were a couple of more solid bits in the bottom of the glass – a bit of gherkin and something else.

My starter was described as “scallops” - surely then a contravention of the Trade Descriptions Act to serve a single scallop. It came with pastrami, wild rice and nuts – the nuts adding to the sweetness of the scallop and providing a good change of texture. I liked this.

Herself’s starter was a cream cheese and chive risotto with black truffle. Described as “perfect” - and herself knows her risottos. She then had the “surf & turf” – a slow cooked fillet with white asparagus, smoked salmon puree, sliced trout and a kipper glaze. There were also cashew nuts and couple of slivers of crisped root veg. An interesting dish with no single flavour overpowering – but also one where no single flavour shone through. Meat was a disappointing in flavour.

My main was lamb – rump, breast and merguez with peas and cashew nuts (again). This was extremely underwhelming. And the very deep bowl in which it was served made it a damn nuisance to eat.

Things bucked up with pre-dessert. Shot glass of mango and cornflake milk with berry and Lovehearts – provided with straw so you could noisily suck up the Loveheart grain. Brilliant combination and good fun. Regular readers will know I am a passionate advocate of north west produce – so a tad disappointing that the Lovehearts were the only identified local item on the whole menu.

Mrs H then had an excellent lemon curd tart – good crisp pastry, very lemony filling. I had a trio of desserts – a savoury cheesecake (that wasn’t , it was sweet and very nice), a crème brulee with apple and a veg that I can’t recall (and couldn’t taste) and a winter trifle (with tomato). I enjoyed these and whilst the actual descriptions sounded most wacky, they proved to be just good non-wacky desserts. We finished with good coffee and petits fours (sliver of custard tart and truffles).

We’d had an aperitif, Mrs H had a half bottle of a nice Burgundy and we’d had a bottle of water. Bill, with service (which had been excellent), came to just under £150.

Glad we’ve been. No-one else in the area has been cooking in this style. However, wouldn’t be in a rush to go back - although we will when the new chef is in place – just to see.