Pasta works in noodles dishes but not vice versa

Wanted to make a linguine dish today. I was out of long pasta. My instincts always tell me not to use noodles in these situations. I thought, I use pasta in noodle dishes all the time, I should put my prejudice aside and try noodles in a pasta dish. It completely failed with tomato sauce. And it didn’t really work with just garlic and olive oil, either. The noodles were long, dried, wheat noodles that were similar in shape to linguine.

Anyone have similar experiences?

I was out of long pasta.

[quote=“bmorecupcake, post:1, topic:4975, full:true”] The noodles were long, dried, wheat noodles that were similar in shape to linguine.
[/quote]

By pasta, I mean spaghetti, cappellini, and linguine.

By noodles, I can give a general idea. I am unsure of the exact names. One is a generic Soba noodle. Another is a Taiwanese noodle with “life” in the name although I don’t think it’s “long life”. I also occasionally purchase Chinese noodle “nests”, but not the yellow-colored ones. I know these descriptions are bad, I’ll post pics soon.

My broad assumption is that dried pasta will be made of durum wheat which is quite a hard wheat, its also not finely milled which contributes to the al dente texture.

Many asian dried wheat noodles will be made with a much softer, lower gluten flour, so they have quite a different texture. They usually cook to a soft texture quite quickly.

A pasta in an asian dish will work because you can cook it for slightly longer to soften it. A noodle in a pasta dish is likely to be too delicate and soft so works less well…that said they may work better with sauces designed for fresh rather than dried pasta.

So pasta is Italian and noodles are from other traditions? That makes sense, I thought you were calling long pasta like linguine ‘pasta’ and short pasta like macaroni ‘noodles’.

Subbing buckwheat soba, alkalized ramen, or Thai rice noodles would certainly make a different dish but sometimes might work. Was it the flavor or texture of your dish that you didn’t care for?

I can’t say I’m a noodle/pasta expert, but growing up in a Chinese family and eating a lot of “Asian” noodles - I don’t consider them interchangeable, because of the texture and taste. I’ve had fair amounts of success in subbing various kinds of semolina/wheat Italian style pastas with each other, but I don’t sub them for dishes that specifically call for a type of noodle and vice versa. I try to match with texture and taste first, rather than shape…if that makes sense?

For instance, I’ve replaced rice noodles with mung bean noodles or yam or starchy noodles (like arrow root noodles), but I wouldn’t replace them with lo mein noodles, e-fu (yi mein) noodles or general thicker egg noodles because they are so different.

My husband’s grandmother was annoyed that people were calling it pasta, when she and hers had always called them noodles. Double sided recent German ancestry, midwest US upbringing, would be 108 if she was still alive.
I think the OP was trying to differentiate between today’s Italian (and that’s not eyetalian like she called it) dried pastas and various Asian noodles.

So pasta is Italian and noodles are from other traditions?

Yes, more or less. That’s how I’ve always used the terms, although your confusion and ewsflash’s anecdote means I have to consider refining my terminology.

Subbing buckwheat soba, alkalized ramen, or Thai rice noodles would certainly make a different dish but sometimes might work. Was it the flavor or texture of your dish that you didn’t care for?

It was both flavor (or a missing flavor) and texture (springiness). But I can’t figure out why it doesn’t bother me as much the other way around.

I meant wheat noodles, like Chuka Soba. Now that I think of it, however, “wheat noodles” might itself be a confusing term. I have never successfully subbed pasta for Buckwheat soba or rice noodles. Pad See Ew with spaghetti just isn’t right. (Trust me, I have tried.)

I don’t consider them interchangeable, because of the texture and taste.

I wasn’t raised in the culture, so I am okay using cappellini or thin spaghetti in noodle recipes when I’m out of noodles. I have read some recipes that will allow it, too. I’m not saying it’s the exact same or even close, just that it’s not off-putting for me. I can understand where you’re coming from, though. Being Pakistani, it bothers me to no end when people use pita bread in place of roti/chapati. Now every time I go to use pasta in a Chinese recipe, your Internet voice will be in the back of my head.

Also, where I live, average quality Chinese/Japanese wheat noodles are more expensive than average quality pasta. That probably plays a part in why I always have pasta on hand.

On PBS’s Simply Ming the other day, he made a pork and black bean stir fry with spaghetti, stressing that it works just as well for this purpose as Asian noodles.

Finally restocked the pantry and have pictures of the “noodles” I use: 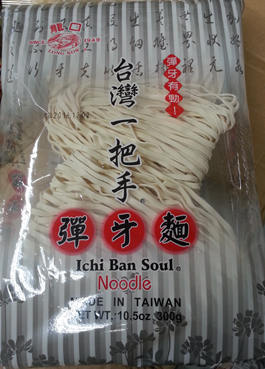 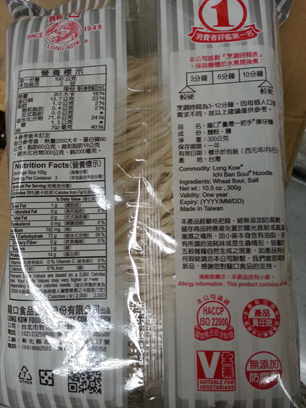 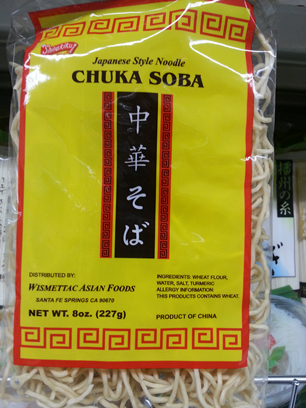