I will always remember that one time: NYE party, I came in at 1AM, somewhat drunk already, and then they had this guy selling oysters at the party for 1 euro a piece. Expectations were zero… but… They were absolutely amazing quality: he told me he had just picked them up the day before in Normandy.

I love Gillardeaux too but they are expensive here, around 30 euro for a dozen. These below are also really good and only 20 euro per dozen.

Ptipois is another one to stalk. Once she came along on our Luberon (Provence) holiday, and in the Coustellet market (a real market, not like Isle sur la Sorgue or Vaison la Romaine), she was rattling off names of different species of laurel and other herbs, plus an encyclopedia of things you would not find in any cookbook.
AND she’s like that with cheeses, and Chinese teas, and wines, without ever stooping to mumbo jumbo.

Indeed gillardeaux are the Rolls Royces of oysters. They are expensive but I’d rather have 6 of them than 12 (or 24) of another kind.
And in the south, around l’Etang de Thau (which I have a tendency to say l’étau de Tang) towrd French Catalonia, in the fabulous markets in, say, Collioure, Port-Vendres, Sète, you can get a dozen oysters plus a glass of white wine for 11 or 12 €. When I go there with friends, they turn into undignified addicts. While I buy food, they by the oyster shack and have a dozen, then another dozen, then another dozen…

Hey Parigi! It is indeed good to hear your voice here. I think you and Parn and ptipois led me hither and yon - but never astray - all around Paris back in 2014. But down to business -with Gillardeaux do you think size matters - no. 2 or 3???

21 gun salute for the return of Cixi. Welcome back @Parigi. Wheeee !

But must disagree. In my experience, the focus on Gillardeau is a bit outdated. Yes, 10 years ago, Maison Gillardeau oysters from Marennes-Oléron were, indeed, the Rolls Royce of shellfish. But his practices and techniques have been so copied by so many other oyster farmers that many other oysters are now, in effect, Gillardeau oysters
.
Everybody’s taste buds are different. Sometimes trial and error is better than just relying on somebody else’s recommendations of particular brands or sources (not only for oysters but also for lots of other French products i.e. Bordier butter which somehow get the not entirely justifiable reputation abroad as “the best”).

In Paris, I most enjoy a platter of multi-source oysters (from Normandie, Bretagne, Marennes-Oléron, Cap Ferret/ Arcachon, etc) to compare and contrast. But that’s just my own particular tastes and preferences. Not necessarily anybody else’s.

When the weather is dreary in Paris, I often make spur-of-the-moment weekend trips to Bordeaux because the TGV from Paris is just two hours, I love Bordeaux, I’m a bit of a beach bum and the fabulous Cap Ferret/ Arcachon beaches are a quick train or car ride away, and, most all, Cap Ferret/ Arcachon is a major centre of oyster farming. Zillions of oysters shacks (a few moored in the Bassin d’Arcachon above the oyster beds… freshness extraordinaire) and, for me, the best price/ quality ratio for oysters in France.

Cixi and her favorite Li Lianying, finally reunited. Top of the morning to you.

Ciao Carole. Best memories of us wicked girls whooping it up together. 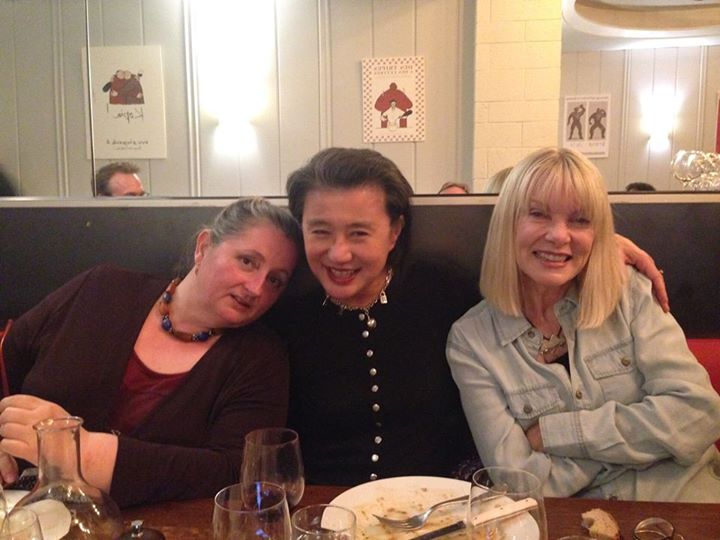 In my prejudiced opinion, chère Carole, I don’t go over n°3 with any oyster. Somehow I think any oyster that is bigger than my tongue is a waste. I need my taste buds to surround it, not the other way around. – Sorriest, does this sound sexual?

Well, on its face (no illicit pun intended) it doesn’t sound sexual, but the analogy is spot on.

The attached photo is so prophetic and apt for this crazy day in which we had no plans except for dinner tonight at Aspic. Then an American friend who has lived in Paris the last 20 years, wanted to get together for lunch to catch up. At first I thought, well there goes the appetite for dinner. Then I thought HUITRES!!! The non-appetite killer. Made a res at Huguette (not too far for our friend and thinking of Parn’s variety pitch). In fact, had just read Parn’s update this morning, so ended up with a dozen, 3 each from Normandy (Utah Beach), Fines de Claires Marennes-Oléron, Perles Noires Bretagne, and Spéciales Gaillardeau. All nº 3s. Friend and husband R were eating other stuff so I got to hoard all dozen for myself and it was a kick figuring out which I liked best. The Gillardeau came out first, with the Fines de Claires M-O and Perles Noires tied at second, and the Normandy ones last, although they were all very good. Can’t wait to do this again.

Okay fine, you’re thinking, how does this connect with the photo. Well, halfway through our four-hour gabfest I received a text from Aspic letting us know that due to one chef getting Covid the restaurant would be closed tonight. Ugh, a Monday night, too. Where to go. A quick reflection of Monday night spots id’d Amarante. Texted Christophe and that’s where we’re going. It’s all come full circle.

Friend and husband R were eating other stuff…

Don’t know what your husband and friend ate there while you were eating the oysters, but I found a picture I couldn’t resist taking of the “other stuff” I liked so much when my wife was downing oysters (well, I was as well) at Huguette for lunch last week: 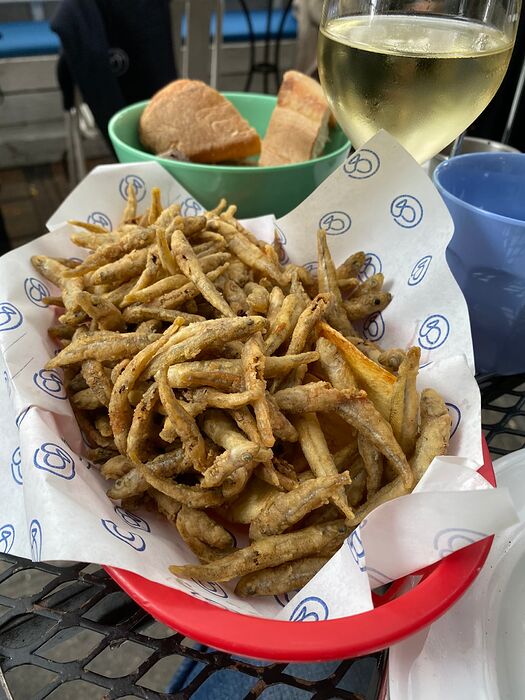 Wow, that must be the éperlans (smelt), n’est-ce pas? Were they wonderful? Our friend Sean had fish and chips which looked good, R had the soupe de poisson which he liked a lot and I thought was a bit overly seasoned.

Yes. They were quite good, although they could’ve been crispier. I wanted to also order the soup but we were busy with oysters and I didn’t think the combination would work, even for me. Especially since we were going to L’Avant Comptoir de la Terre (& maybe de la Mer) a little later on.

I so envy your appetite!

I love this whole thread! Hope @Carmenere sees it, as I suspect she will love it as well! I know oysters are a thing in Paris, but I never think to go eat them, as I find my fill on the east and west coasts of U.S. But I need to take the plunge next time I am in Paris!