On our May trip we dined at Le Jules Verne and Shang Palace, 1* Michelin restaurants. One was terrific, one was a mistake.

Le Jules Verne has the reputation of being an expensive tourist trap. Located on the second floor of the Eiffel Tower with stunning views of Paris, it received many mediocre food reviews under the direction of celebrated chef Alain Ducasse. But Ducasse left in 2018 and after several months of extensive renovations (and a lawsuit by Ducasse), LJV re-opened in 2019 under the helm of Chef Frédéric Anton. Ducasse alleged that Anton was not up to the task to operate the restaurant properly. Was he right?

All I can say is Jerry and I had an absolutely wonderful lunch there on the first full day of our trip. This was our big 40th anniversary celebration meal and the food, drink, service, and view were utterly charming and romantic. Guests are treated very well here. You bypass the crowds to go up to the restaurant in a private glass elevator. It’s cool because you get to see the inner workings of the Iron Lady. After the meal you are allowed to go down a short stairway to the public outdoor level and ring a bell to get back in to take the private elevator down.

A few basic facts about our lunch:

For lunch you have a choice of three menus, a five or seven course tasting menu, or a three course a la carte menu called Views Over Paris. We chose the a la carte menu because the other ones had fish courses and we don’t eat fish. We started with champagne and two amuses. Three small savory bites focused on artichoke, and another focused on asparagus. Bread was fine, served with butter imprinted with LJV.

-For the appetizer, we both chose the Sheep Cream Ravioli, which was o.k.
-For the main, we both ordered what I thought was going to be beef stir fry based on the menu’s description, “Beef. Stir Fried. Pepper Sauce. Grosse Frite.” It was NO stir fry. Instead, it was the best Steak Frites I’ve ever had. A perfectly cooked filet mignon with a rich, lightly peppery sauce, served with the most incredible frites ever. (Still thinking about them.) We were so surprised and absolutely blown away with how good this dish was. 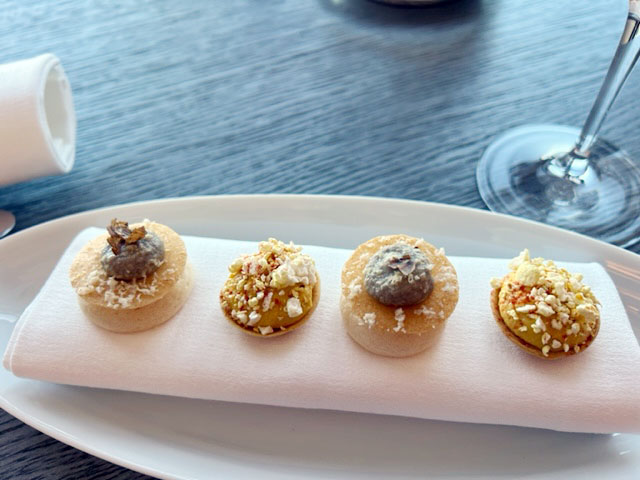 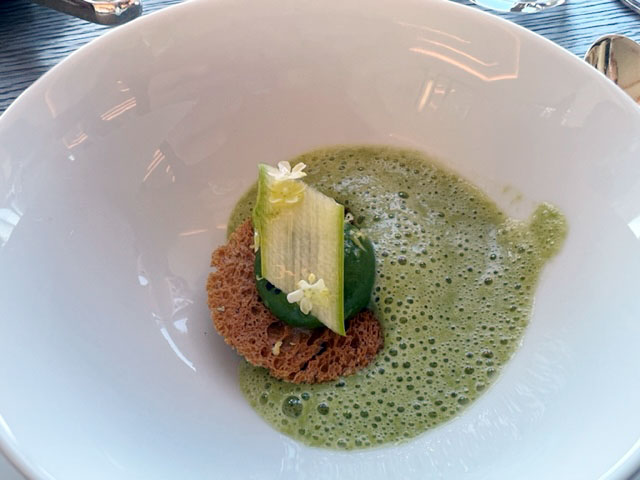 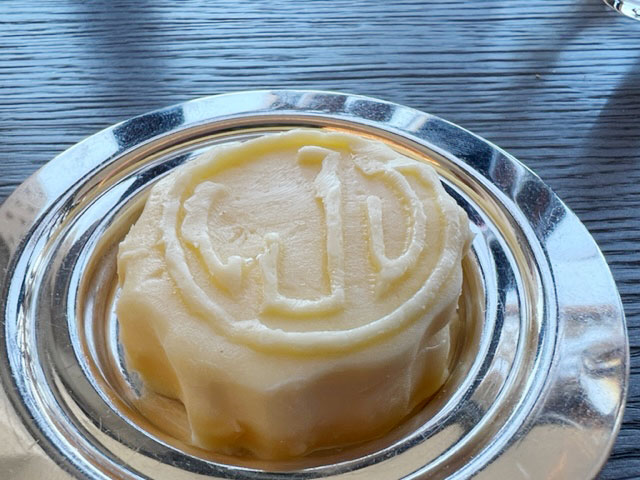 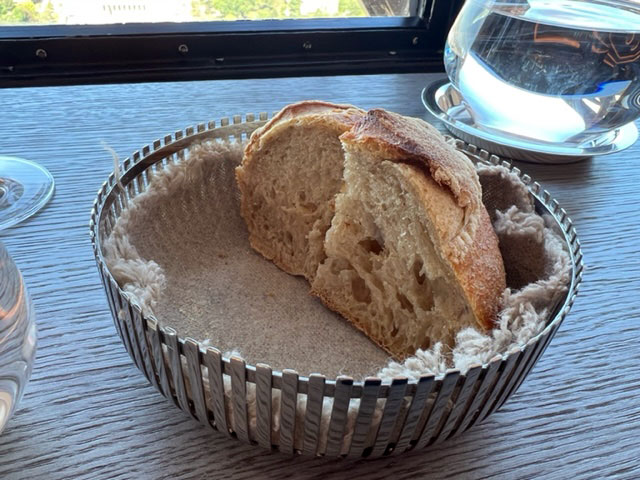 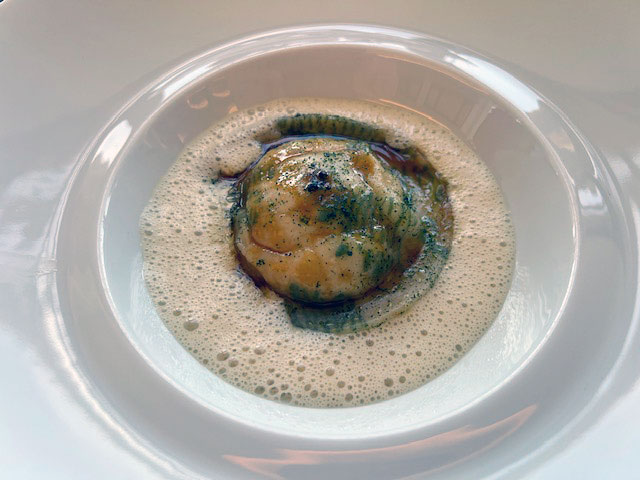 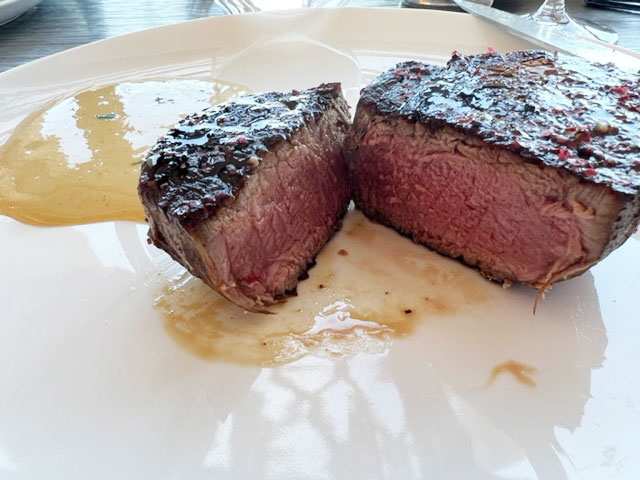 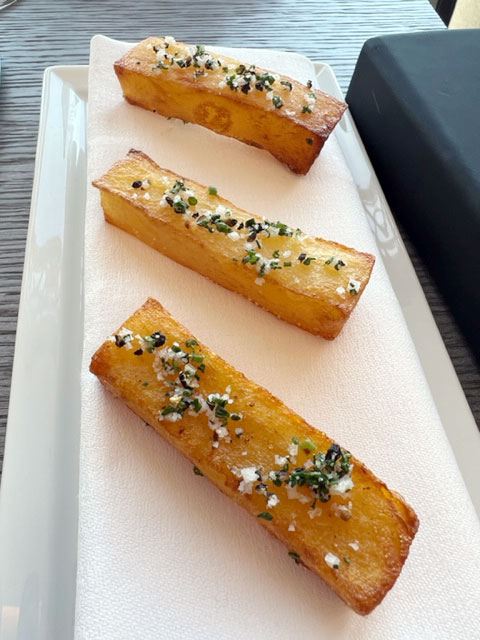 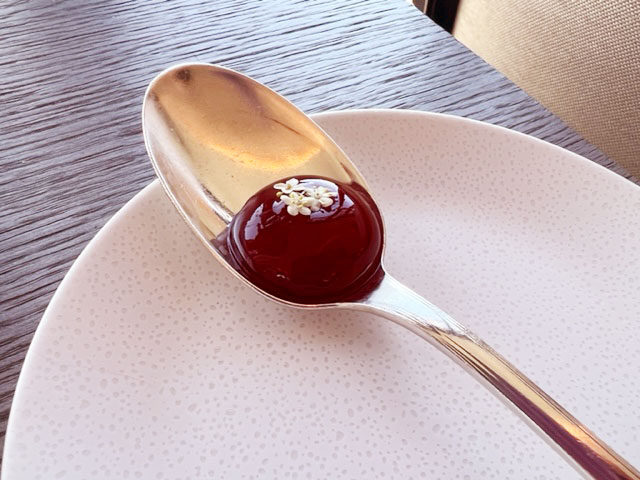 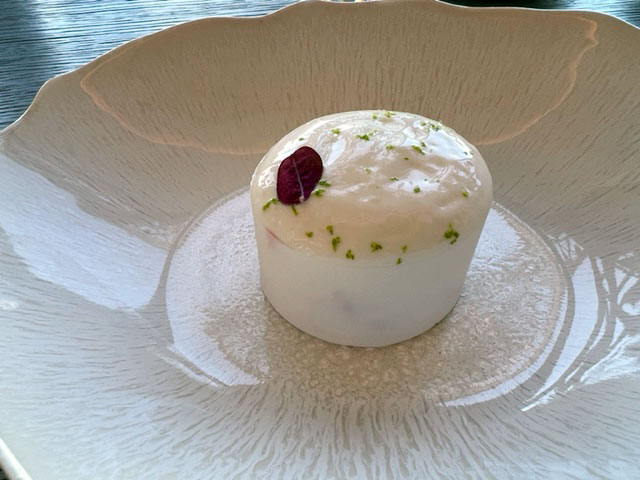 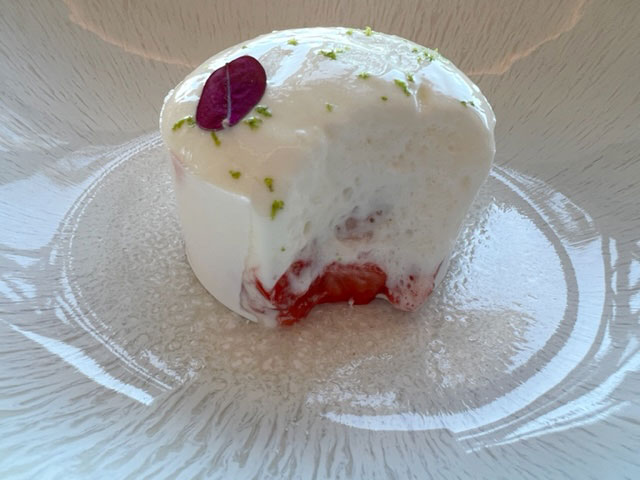 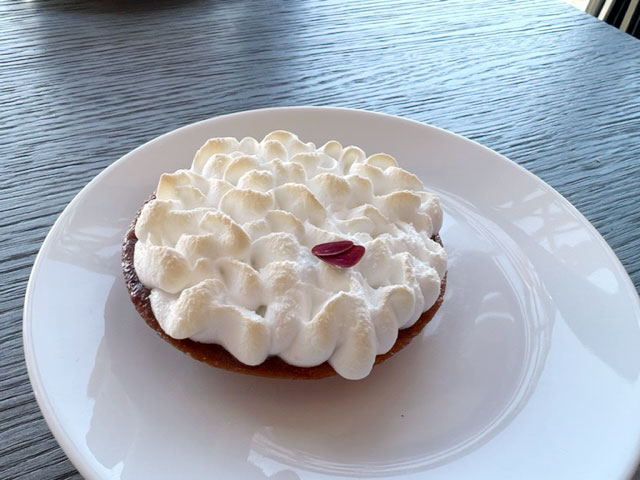 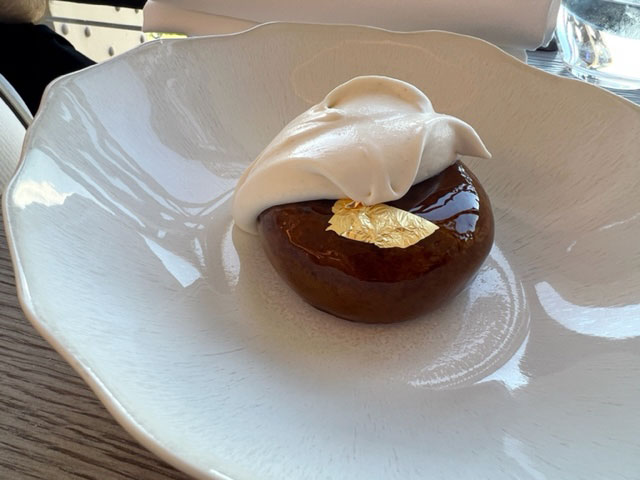 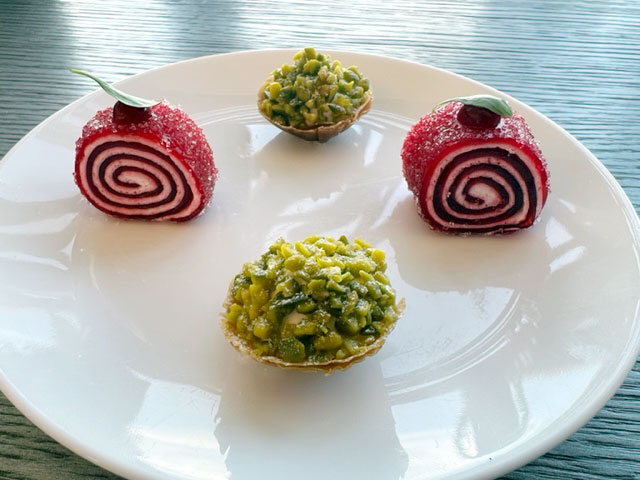 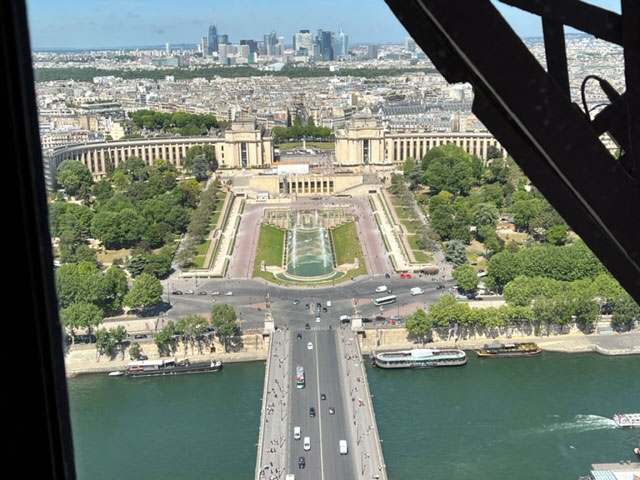 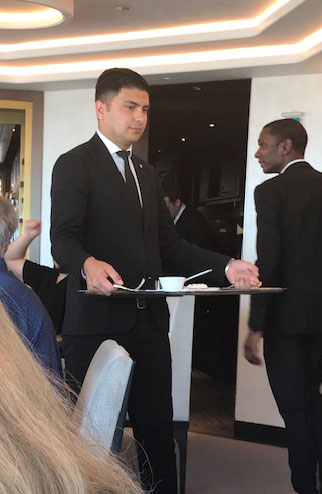 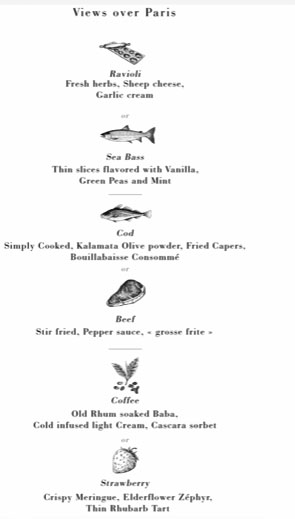 Lovely to hear you had a good experience. We’ve found the ability to enjoy Tour Eiffel without the crowds to be a wonderful bonus at LJV, but rubes that we are we even enjoyed our meals there when Ducasse was still at the helm. Perhaps it’s the cost that is off-putting to so many. When it comes to Paris we tend to suspend disbelief. The sticker shock doesn’t really hit until the credit card statement arrives, though I don’t ever recall thinking it wasn’t worth it!

Congratulations on your anniversary!

Why did I go here? Parn, you tried to warn me. But I thought it would be cool to try upscale, 1* Michelin versions of standard Chinese takeout favorites. While the food was admittedly very good, the restaurant was as dour as a tomb. I was going to cancel it, but decided to keep it because we weren’t overly hungry and we could just share a couple small plates.

Shang Palace at the Shangri La Hotel is split into two rooms, a seemingly nice one and what I would call the runover room, which is where we were seated. Tables are spacious and ours was nowhere near anyone else. It was incredibly silent for those who like to eat that way. Our server was a perfunctory lead-faced gentleman who looked like he was in pain for having to waddle over to us. We had to ask for a wine/drink list. After we ordered cocktails, we were never asked again if we wanted anything else to drink. I asked if they served tea, and was summarily brought the tea menu. Our gentleman brought the tea and plunked down a bowl of red sauce, never explaining what it was. My husband whispered to me, as to not break the silence barrier, “Let’s eat and go.” I mouthed “yes” and nodded in agreement.
-We ordered three plates. The first was the 56 euro “Barbecued Meat Combination,” a small plate of roast duck, barbecue pork and crispy pork brisket. The duck was ok, the pork was good, but the crispy pork brisket was a big WOW! Cut into little cubes, our server brought a plate of mustard and sugar and instructed us to put mustard on the cube and sprinkle it with sugar. It was delicious! Super crunchy top and full of flavor. Totally memorable.

This was the most expensive Chinese food I’ve ever had, but it was delicious. Too bad it was such a muted, humorless place.

On the way out, my husband suggested we chat for a moment in one of the rooms in the empty hotel lobby. So we sat on a couch and discussed our activities for the following day. A worker at the hotel entered the room and asked if we were guests at the hotel. I looked at her… and said no. Pause. She looked at me. Pause. I then said we had just had dinner at Shang Palace was it ok if we sat for a minute. Yes, she said. So she kindly kept us company in the room, looking at us. We left.

That’s all I want to say, except, again, Parn you were right. 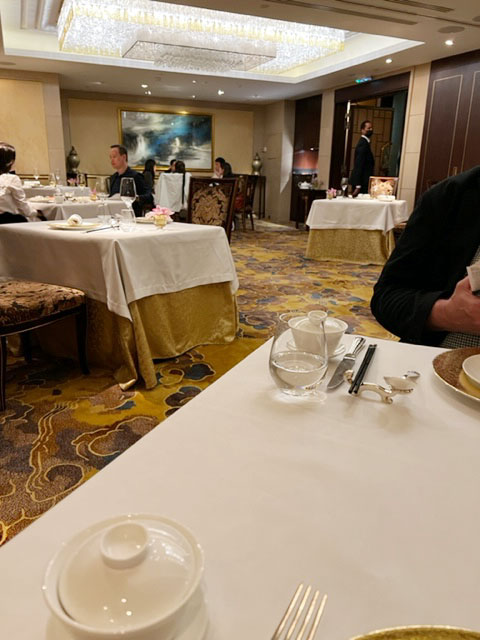 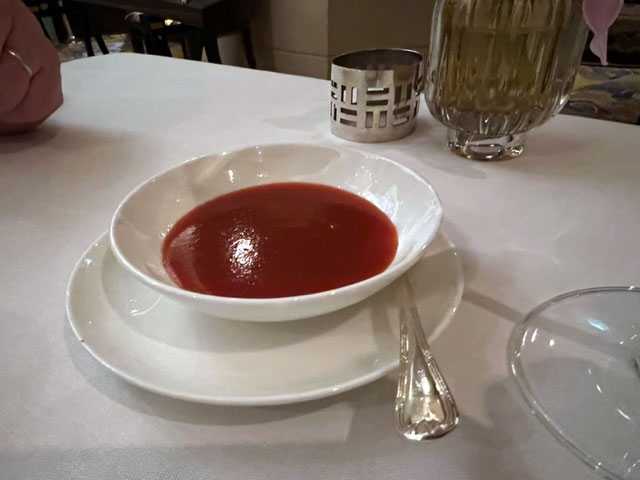 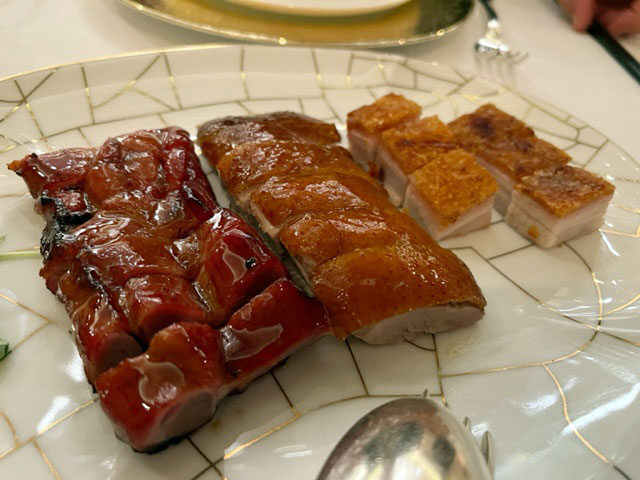 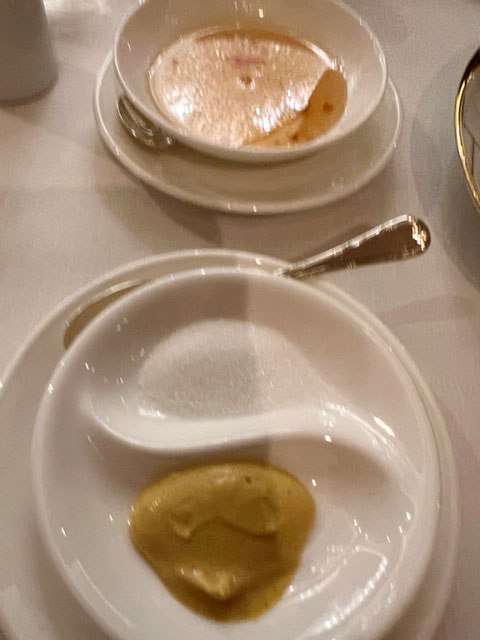 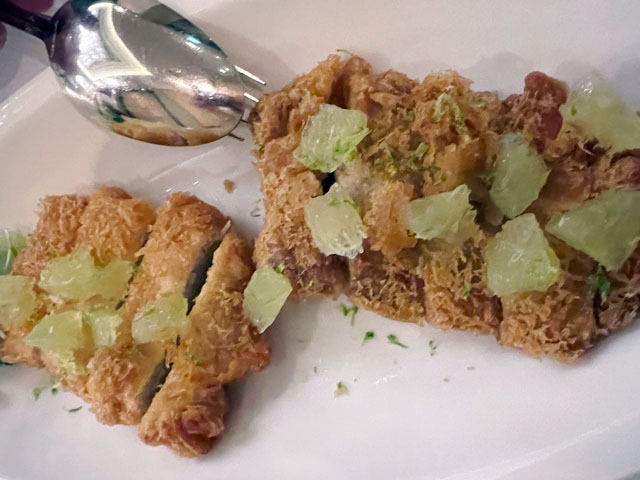 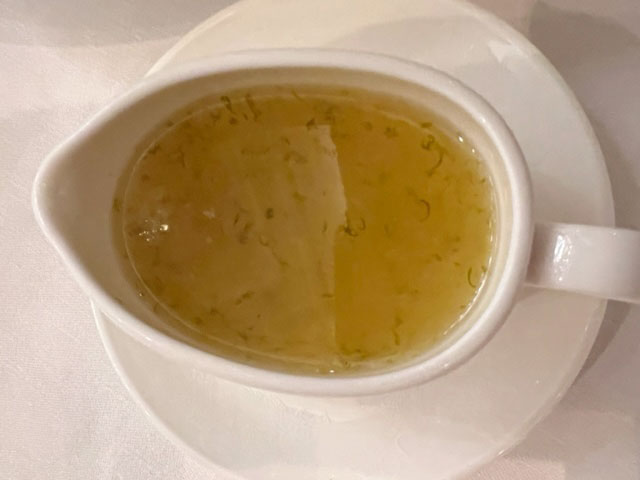 I’m with you Max!

As someone who loves and regard oneself as a Chinese ( Cantonese ) food specialist on Chowhound ( having resided and visited famed Chinese food centres like Toronto, Hong Kong, Macau… most of my life ), I was contemplating chiming in on your Shang Palace review…but ultimately decided to refrain from doing so, fearing I might speak the wrong thing.
All I wanted to say is, reading your review and seeing the photos posted. In the future, do come visit us in Toronto and I’ll direct and even treat you to some superlative Chinese/Cantonese food at double the quality and quantity as Shang Palace and most importantly, at half the price!