Chinese cooking has been pretty mediocre in Paris for so long, the Chinese community here are mostly originated from the Southeast Asia, i.e. Vietnam, Laos and Cambodia. The cooking is not exactly authentic. The scene is slowly changing since 3-4 years. With the lower ends, you find more varieties: Northern Chinese noodles shops, dim sum specialised restaurants, or trendy fondu places etc. Higher end places you can find Shang Palace in Shangri-La, Lili from Peninsula. And just opened a few months ago, Family Li in rue du Faubourg Saint-Honoré.

It’s the first Family Li restaurant 厲家菜 in Europe, they have restaurants in Shanghai, Taipei, Tokyo (with Michelin stars) and in Australia. They serve 19 century imperial court delicacies in a modern way. The chef Ivan Li is the great grandson son of the imperial chef serving the emperor in the forbidden city.

I called a month ahead to make a reservation for a Saturday dinner, it was a Chinese man speaking average French answering the phone. Then, 2 weeks later, I called them to reschedule for a Saturday lunch…the woman answering this time couldn’t find first reservation, she spoke alright French, I secretly hoped that the reservation would be noted this second time. D-day, we arrived on time. The restaurant had a big spacious lobby, modern minimalist Chinese decoration with an emphasis on gold. Our table was 1 of the tables on the ground floor just behind the lobby. They had a second floor, I saw big Chinese families arriving was leaded upstairs.

An experienced Chinese maitre d’hôtel served our table, he was friendly and professional, he showed us the French and the Chinese menus. We both have chosen the Menu Délice to try the restaurant.

The amuse bouche was caramel walnuts with a spring roll crispy shell with a date inside. Nut was good, I didn’t see too much the relationship with the spring roll. 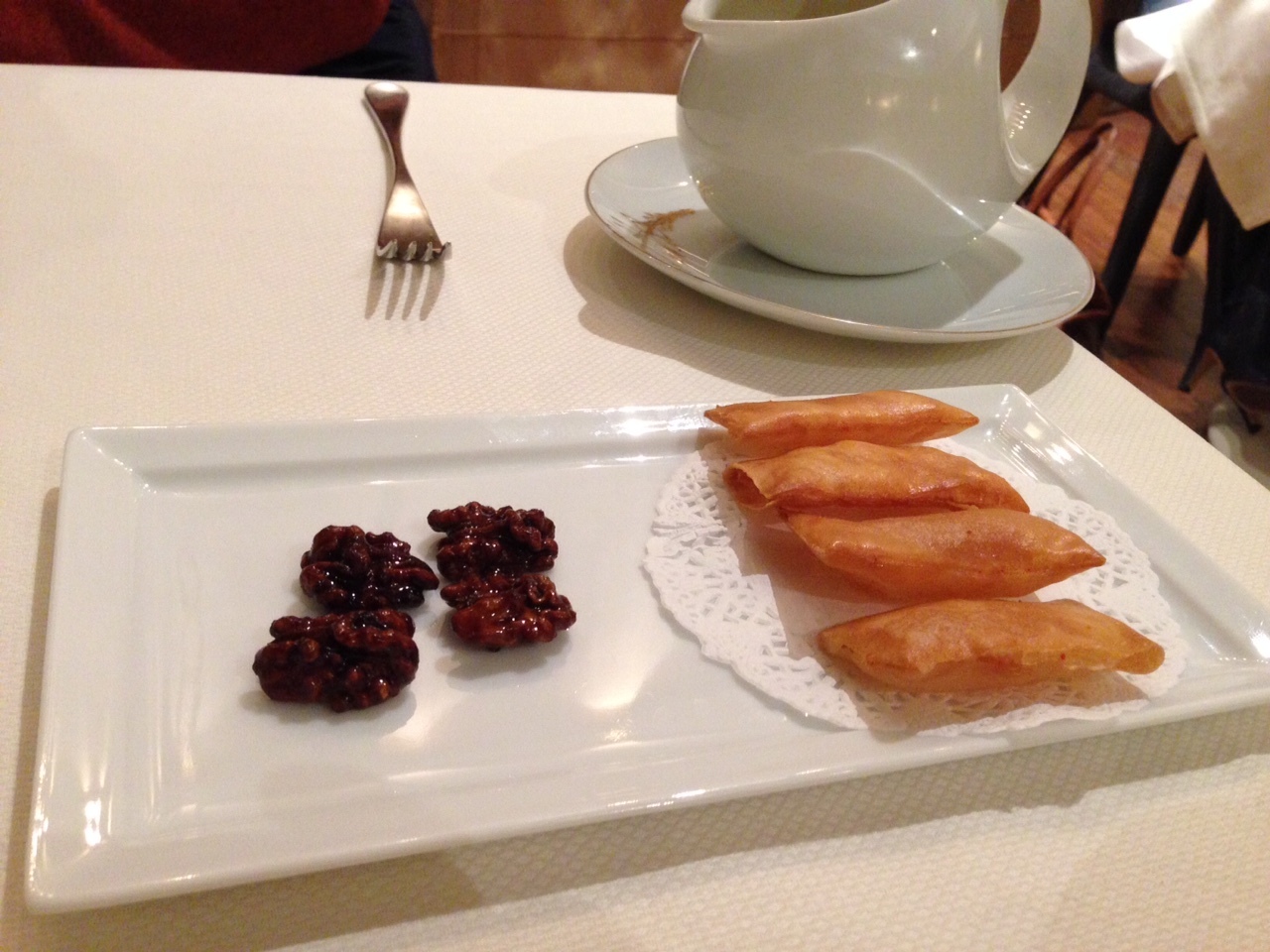 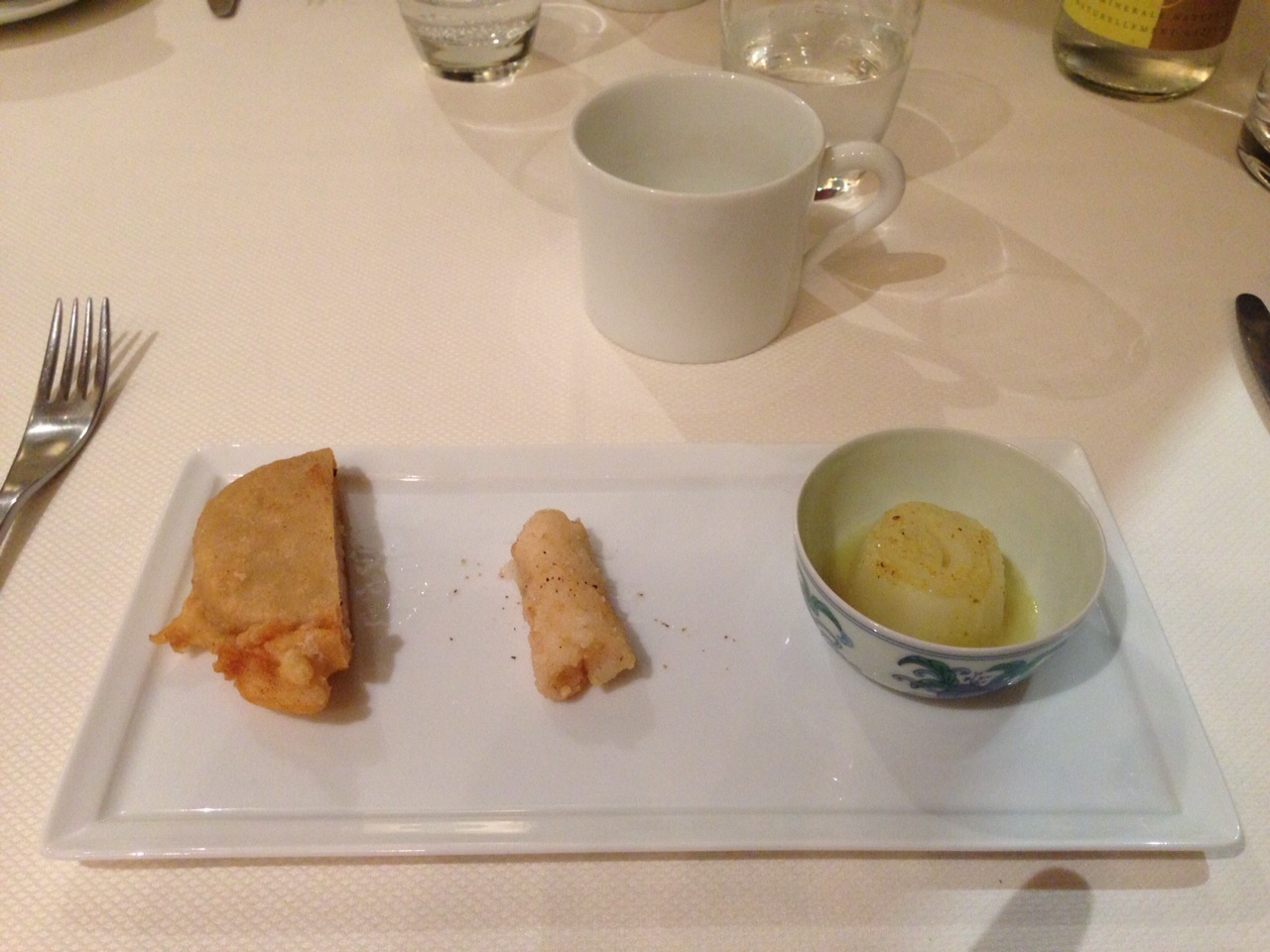 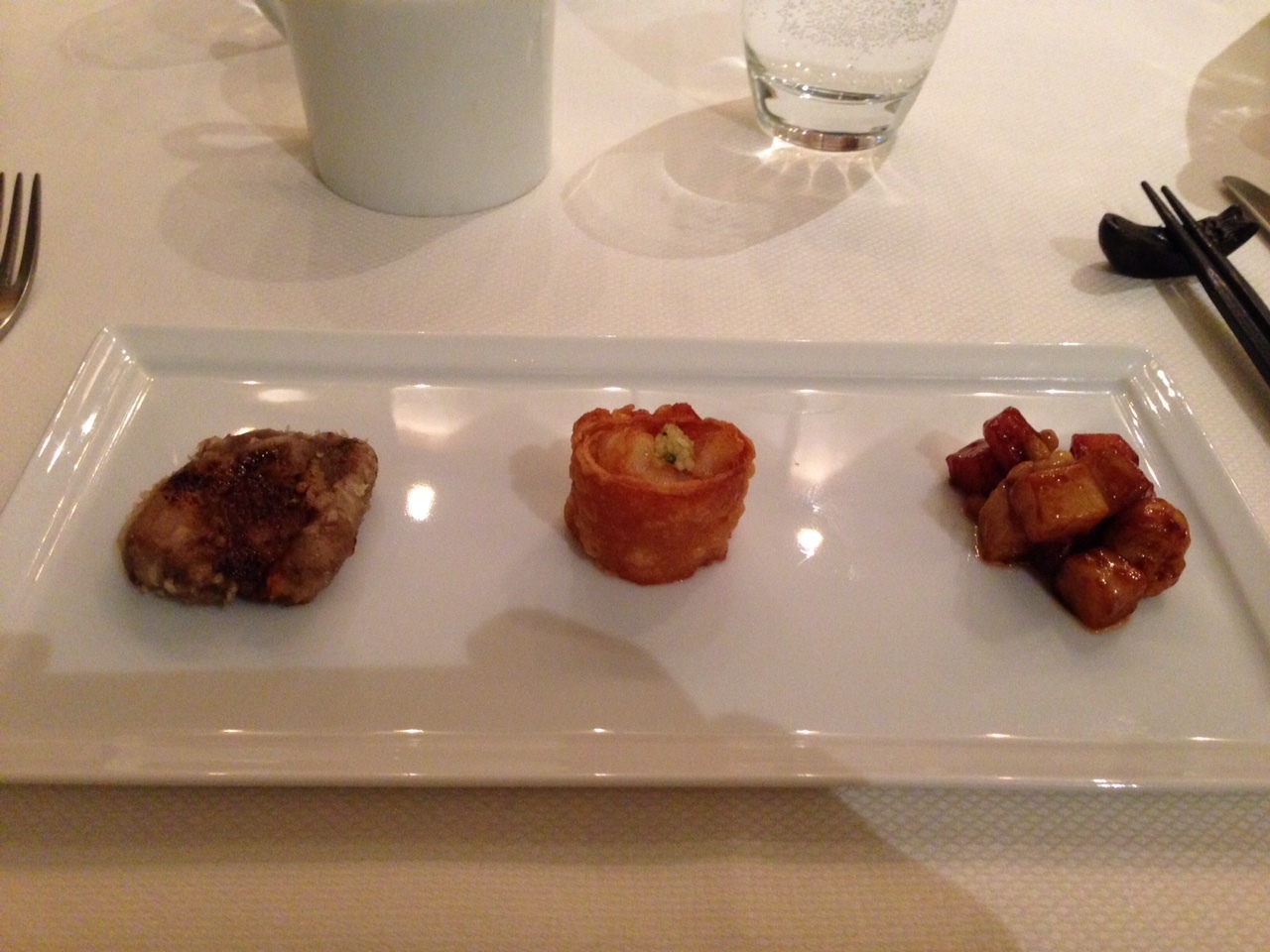 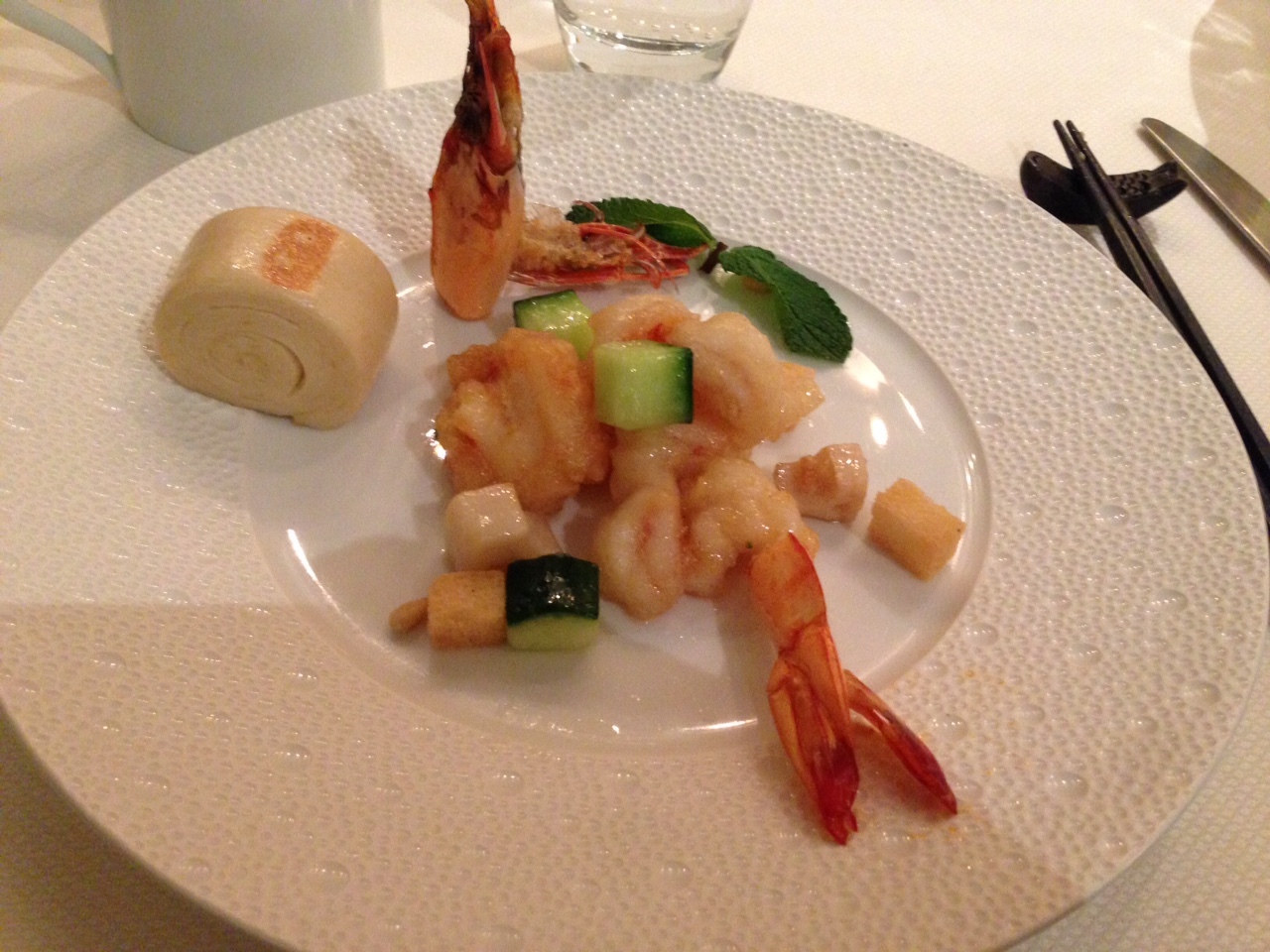 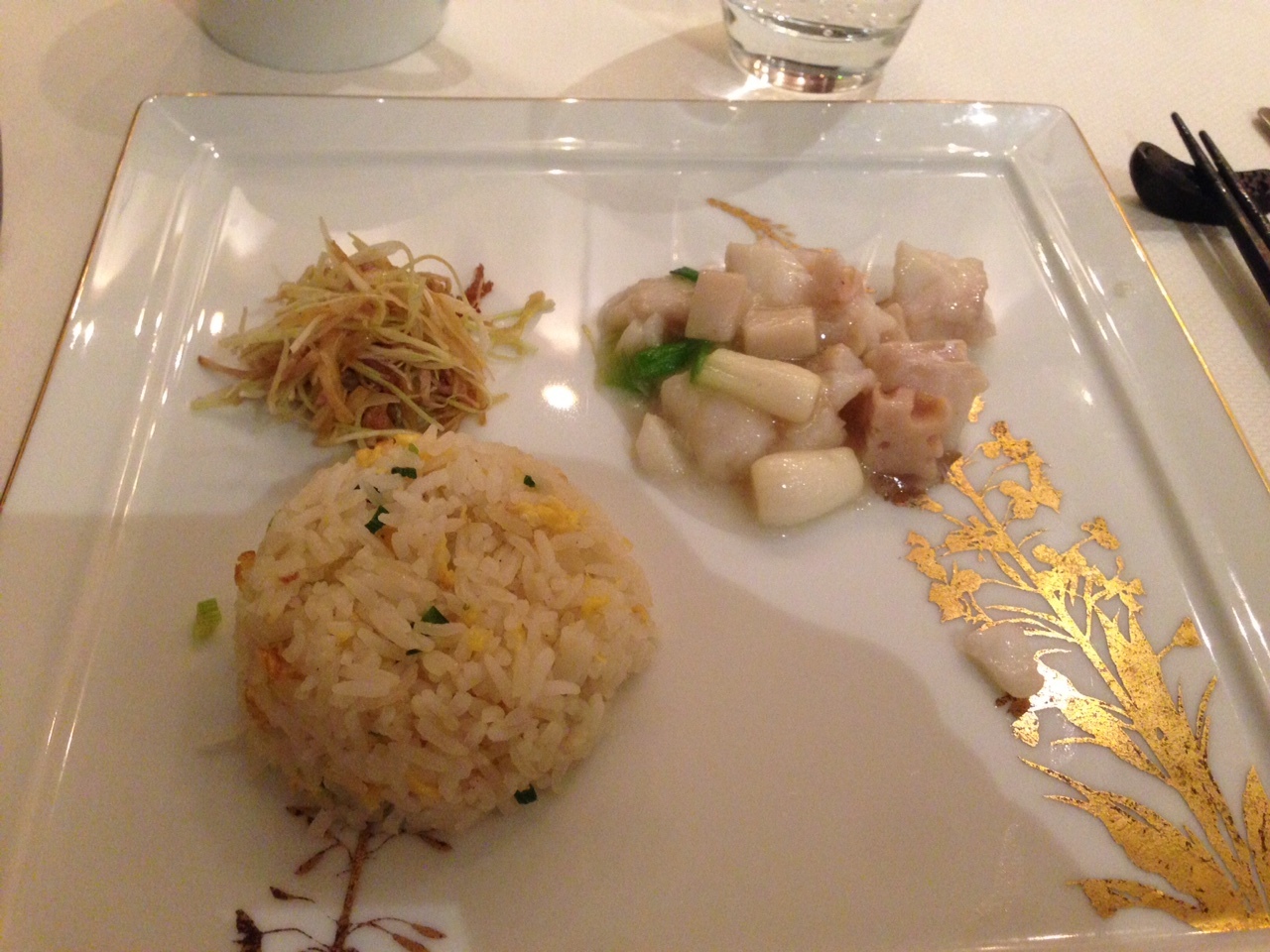 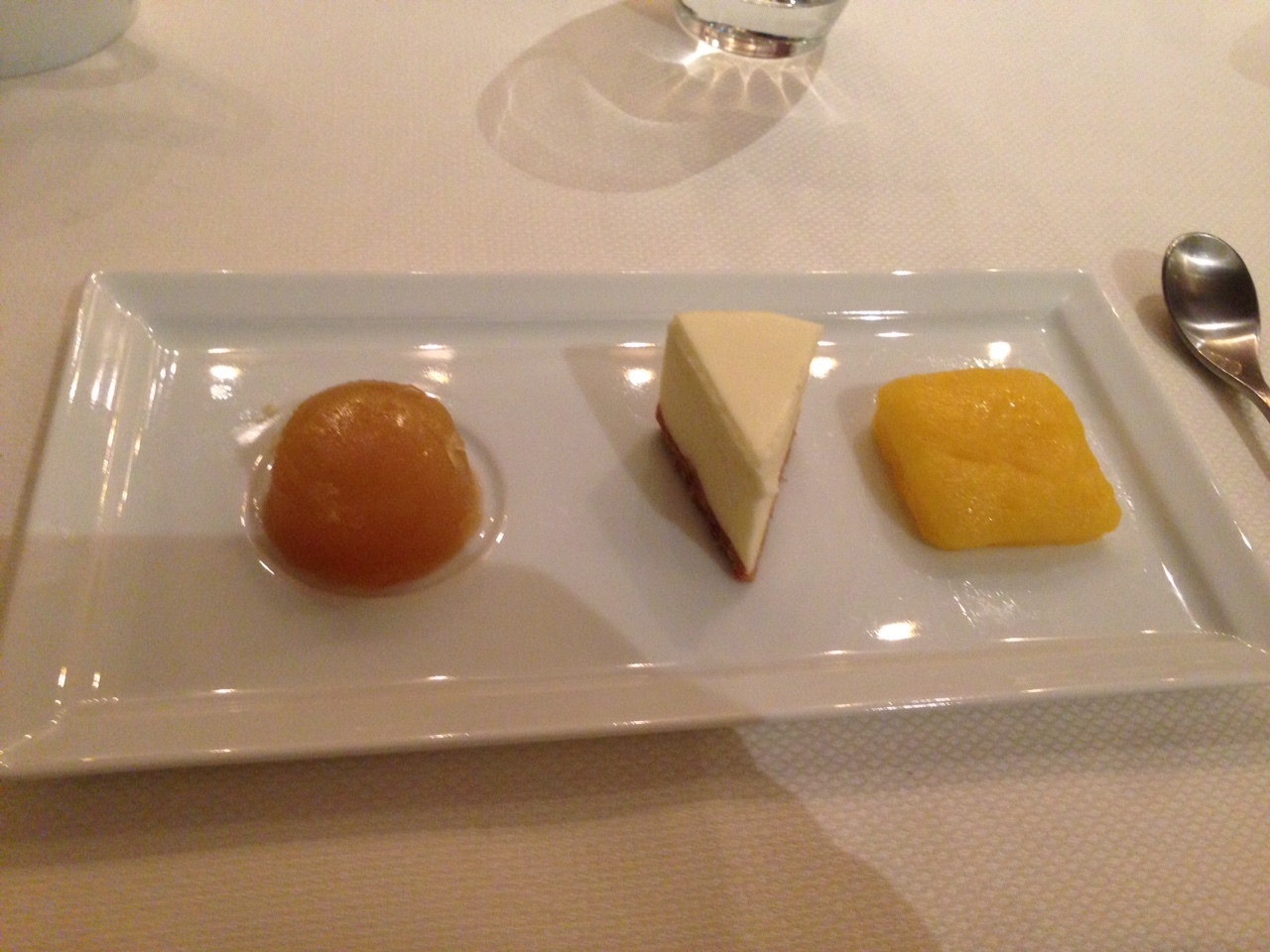 Food were presented like tapas. Though I didn’t see too much the relationship between each individual entity on the same plate. For Chinese food, they weren’t at all heavy or oily, sauces were light, maybe a bit too light to my likings (I love sauces). The cooking was well done. We have ordered tea with the meal. At present, they had only Mariage Frères jasmin tea (5E each), which they refilled generously every time the pots emptied without extra charge (a plus, signified it was a real Chinese place). 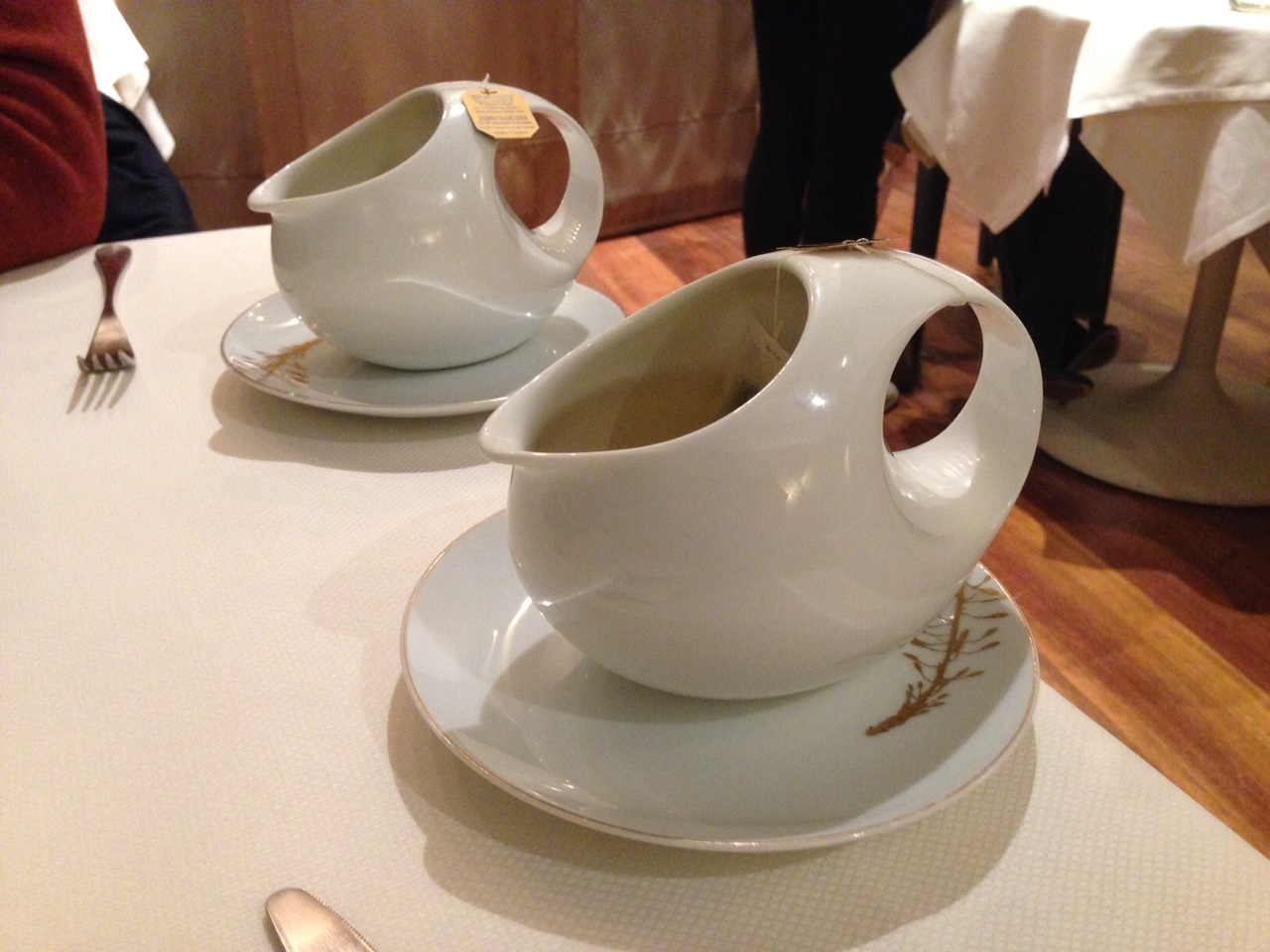 Will we return? Probably, when I’m craving for good Chinese food. The lunch menu was 48E. It was one of the best Chinese place I have eaten in Paris. Next time, we will probably have dinner to see the difference.

How did they get the date inside the fried spring roll? Overall it seems like a very interesting meal. Do you know if imperial cuisine presents dishes like that or did they present the dishes like French restaurants?

Those are some interesting looking cups in the picture. (Or are those teapots?)

I remember at a time Chinese in Paris are various regional specialties cooked by Wenzhou immigrants. What’s the source of the latest shift towards better Chinese food? Immigrants from a larger geographical region?

I’m not an expert in Chinese Imperial cooking, I checked out the Family Li restaurant in Shanghai, they present the food in the same way as in France.

Some quick images search, you can see there are a lot of pieces in each plates, I guess in a traditional restaurant, you will have 6 pieces in a dish to be shared with guest. They have chosen a modern way to present the food. 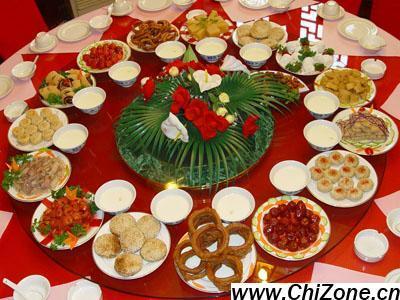 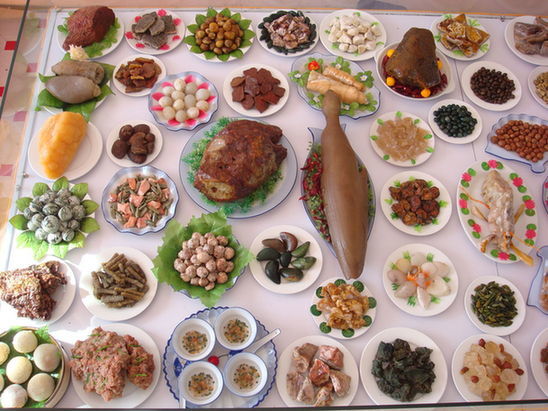 Those are some interesting looking cups in the picture. (Or are those teapots?)

They were teapots, not cups.

I remember at a time Chinese in Paris are various regional specialties cooked by Wenzhou immigrants. What’s the source of the latest shift towards better Chinese food? Immigrants from a larger geographical region?

It used to be the Mandarin speaking Chinese in the 13th district, the Wenzhou immigrants are concentrated in the 18th, 20th district and also scattered in the Chinese fast food on every street. A few years ago, in the 9th district, some artisan noodles shops appeared with very spicy cooking, they distinct themselves with making noodles in front of the shop. It was a sensation, all the French media talked about it. Then more of the similar types appears everywhere in Paris.

Since a few years, you saw the fastfood vanishing (pre cooked food and heat up in microwave for instant consumption or take away), and more interesting concepts appearing and the waiters are young people. I believe is the immigrate’s second generation growing up, they are not interested to open yet another fast food or another cheap japanese sushi shop like their parents do. They understand more about the French society. A Chinese food place doesn’t need dragons and phoenix decorations anymore. Another source is new arrivals coming from China have more understanding about cooking, not just immigrants arriving in France and use the wok the first time in their lives because they need to find a living.

Food wise, they try to specialise, hot pot restaurant, noodle places, Northern Chinese specialites. Some are better than the others. On the whole the level raise. The fine dining in the higher end in the international hotel groups are more doing the Cantonese style food. On the streets, the new entries, you find more northern style cooking or even sichuan cooking, many stressed in home cooking. Interesting is that the French don’t like hot food, I think the new Chinese restaurant is a challenge to their palette.

Closed probably in late 2016. Sorry it was so short lived, I was thinking to go back, the food was good.

I don’t know how I missed your original post, because I love Chinese food, and I love Paris, but missed it I did. I had wanted to eat at Family Li, and am also sad that it has disappeared.

Recently I read on Chowhound that there are some good dim sum places in Paris: Le Royal China in the 3rd, Chinatown Olympiades and Tricotin in the 13th, Tai Yien in the 19th. Do you know any of these places?

Been to Le Royal China recently in January. OK with chicken feet (if you like this), dumplings are ok, but nothing special, I have ordered Xiao Long Bao. DON’T ORDER ROASTED DUCK! Nothing like Mirama, just a boiled bird, it wasn’t roasted.

Been to Olympiades and Tricotin years ago, fine when compared to the usual Paris standard. Still a bit far from what you find in Asia. The skin of dumpling are thick. Family Li was another level, first of all, it was imperial cuisine, not dim sum. Years ago, there was another place higher end place quite nice we went for New Year, that place too, vanished after a year or 2. I guess, in the end of the day, fine Chinese dining didn’t have enough clients in Paris yet.

If you like good high end Chinese, you can always try Shang Palace in Shangri-La Hotel, or Lili in Peninsula Hotel. Both in the 16e.

We had lunch at Mirama last year and quite liked it. The Chowhound poster said that the dim sum at Chinatown Olympiades were better than those in Manhattan. I can believe that. Manhattan dim sum are not great. With the exception of XLB at Shanghai Cafe…

Mirama is good for roasted meat and wonton noodles and dumplings, I also had a good steamed whole fish. Many other dishes I have tried were just average.

What happened to your meal at Chinatown Olympiades? I am never hot with this place.

I had mentioned Chinatown Olympiades in a previous post, having read about it on Chowhound. Well, we tried it in November and thought that the food was very pedestrian. A wasted meal.

But I have a question for you. You mentioned Les Saveurs d’Asie once years ago, and then specified the location. We have been going there for a light lunch on our last couple of trips to Paris. Now I see that there are numerous places in Paris with the same name. For example, a few steps away on rue Monge, but there are others, too. Is there a connection between them?