Second part of my 6-day trip to Paris, as a solo traveler. You helped me with a lot of very nice suggestions, so here’s how it all turned out.

On day 3, I had intended to go to Azur (in the 8th) for a quick lunch. It turned out, that ‘quick’ wasn’t possible. There was a line, on the sidewalk, all the way to the corner of the street. I didn’t have time for that, so in the end settled for a sandwich and ice tea from a supermarket nearby.

Toyo
I went here for dinner and was really looking forward to this place. I like the Japanese-French style, I like the lay-out of the restaurant too: it’s small, no more than 20 guests, most of which sit at the bar, where you can see the plates being prepared. So as a solo, there’s no need to get bored, you can either strike up a conversation with your neighbors at the bar, or watch all the action in the kitchen. The whole place also reminded me of Ken Kawasaki, where I went on my previous trip to Paris (2019), but which unfortunately no longer exists.

However… the actual experience wasn’t all that positive. I really, really wanted to like this restaurant, but it just didn’t work for me. First of all, and I think most importantly, there was a massive language barrier. None of the staff spoke more than just a few words of English (and my French is equally dramatic). I like to get advice on the wine: ‘what wine would go best with the menu this evening?’ All they could answer was: we have red, white, champagne and sake. I tried again: ‘ok, but with the set menu, which would go best, red or white?’ She just shrugged her shoulders and left.

I’m also not sure what I ate exactly. There was no written menu (well, I’ll get back to that) and the given descriptions were either extremely basic (‘mushrooms, shrimp’) or lacking completely: just putting the plate before me with a friendly smile. Wearing a mouth piece, being very soft spoken and not articulating very well, only added to the problem.

Back the menu. There actually was a menu, but it only had two items: Toyo menu €99 and Special menu €180. No specifications. Nobody was able to explain the difference, so I chose the Toyo menu. I’m not sure if the special menu contained extra courses, but the thing I did notice (while seeing all the plates being prepared) was that truffle was added to one dish and caviar (I think) to another. I didn’t get those things, so I assume they were part of the ‘special menu’. 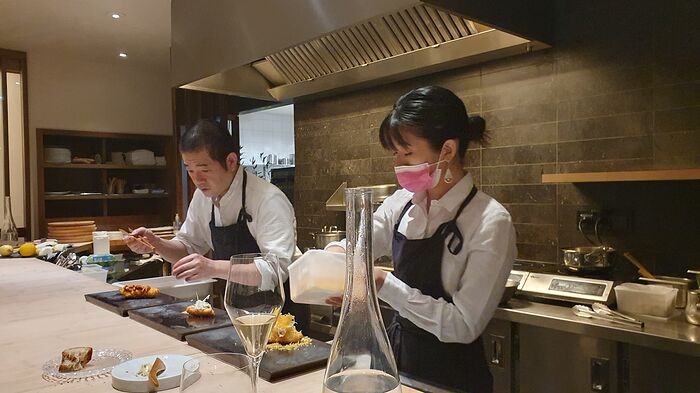 About the lay-out of the place: I still really like that. However, I was seated between a grumpy Japanese man (who only mumble-shouted things to the chef in Japanese) and a couple of young lovers, who were - and I don’t blame them - totally focused on each other. So no neighbors to have a chat with. Another element was that the place was far from full. I was one of the last to arrive (which surprised me, at 8 pm, on a Saturday night)) and thus also one of the last to leave. Which meant, for the last few courses I was sitting at the bar, pretty much alone, and there was hardly any action going on in the kitchen either, for me to watch. So the concept is perfect, it just needs a bit of buzz to really make it work.

Finally to the food then. I know Japanese food can appear to be deceivingly easy (‘sashimi is just slicing up a fish, right?’). Even so, I thought some of the dishes were just a bit to simple, compared to the price they’re charging. Though I do acknowledge that might be related to me not fully understanding what some of the the dishes were, due to the language barrier. Diversity was an issue as well: a bit too many courses with grated cheese, or with mushrooms. Finally, one of the dishes was served way too hot, I almost burned my mouth, taking the first bite. That’s just not acceptable in a restaurant like this.

So, all in all, high expectations, that weren’t fully met. It wasn’t a disaster or anything, it just could’ve been quite a bit better on quite a few aspects.

Brasserie Dubillot
Lunch on Sunday. It’s a good thing that I booked beforehand. The place was absolutely packed. I had to sit upstairs, but I didn’t get the impression that’s better or worse than downstairs. I liked the atmosphere, it’s a bit quirky, college-like, friendly and very affordable. Staff seemed rushed, which makes sense, given how busy it was. It did lead to mistakes on the bill: there were some things on my bill that I hadn’t ordered. Luckily I spotted that in time.

Staff speak English very well and there’s even an English menu. I had the steak tartare (with fries), and lemon meringue tartlet. Both quite nice. The steak tartare had been on my ‘wishlist’ for Paris, cause it’s not a dish that’s commonly found on the menus of restaurants in my home country. The only little point of criticism: I would’ve liked the steak tartare’s flavoring to be a tiny bit more subtle, so you can still taste the meat and not just everything that’s been added to it. 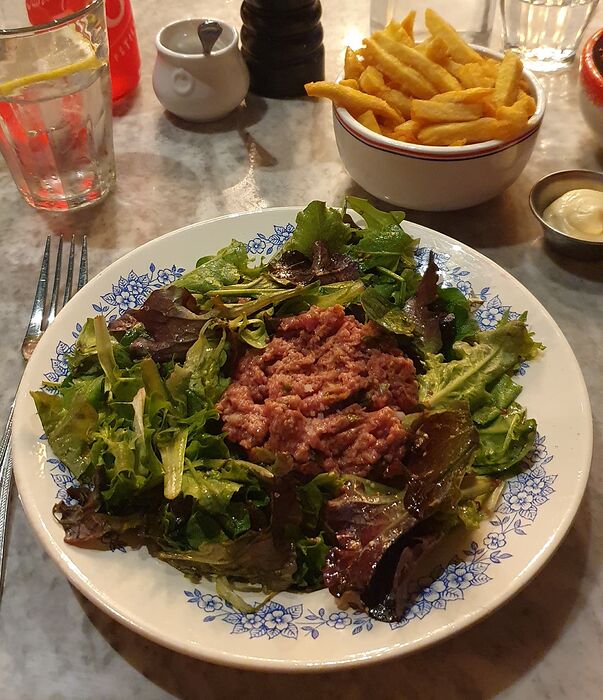 Pierre Sang in Oberkampf
My Sunday dinner. This place has been discusses on this forum extensively, so not a whole lot to add to that. The price to quality ratio is really outstanding, but I’m not so sure the concept is my cup of tea entirely. The fact that the staff only tell you about the dishes after you’ve eaten them… I find that a bit frustrating. They might tell me there was this or that in the dish, which I hadn’t noticed - so I’d want to take another bite and see if i could determine it - but by then the dish was already eaten of course.

This place was completely full too. I had requested a seat at the bar, but didn’t get one. I was placed in the basement instead. All the guests seemed rather young (I actually felt a bit old and I’m only mid 40s). Quite a lot of tourists here, maybe because I chose the 7 pm instead of the 9:30 pm shift.

Anyway, all in all, pretty enjoyable, tasty, affordable.

I only took two photo’s here, sorry guys. Also, the description of the dishes is very basic, cause it isn’t written down anywhere and I couldn’t remember it all.

Thanks for the write up and honest reviews!