We had been to his then-only address on Oberkampf in spring 2014, when you could not reserve. Now there are two addresses, and one can reserve on the website, which even has English pages. The price has gone up slightly to 39€ at Oberkampf, and it is 49€ at Gambey a half-block away (there are cheaper options at lunch at both places, if you take fewer courses). The format has not changed: counter seats with a great view of kitchen prep and execution, much interaction with friendly staff, and a set menu where dishes are explained after each course. The one thing we missed this time was Pierre himself, perhaps because both our meals were on weekends. Meals were overseen by young Korean chefs, not quite as affable, but they tried. 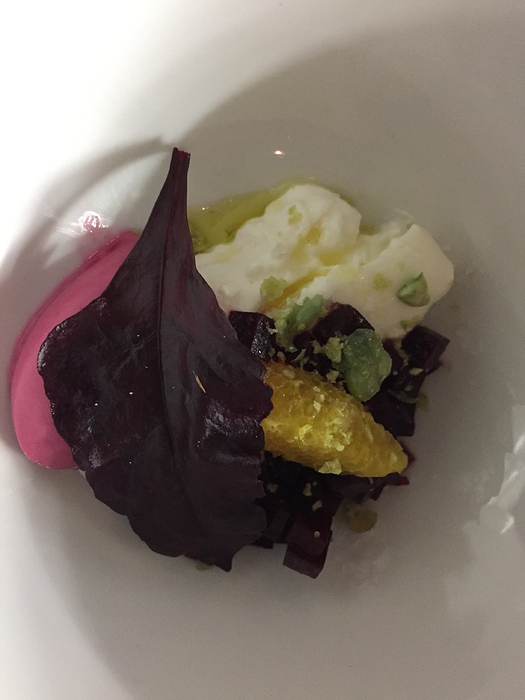 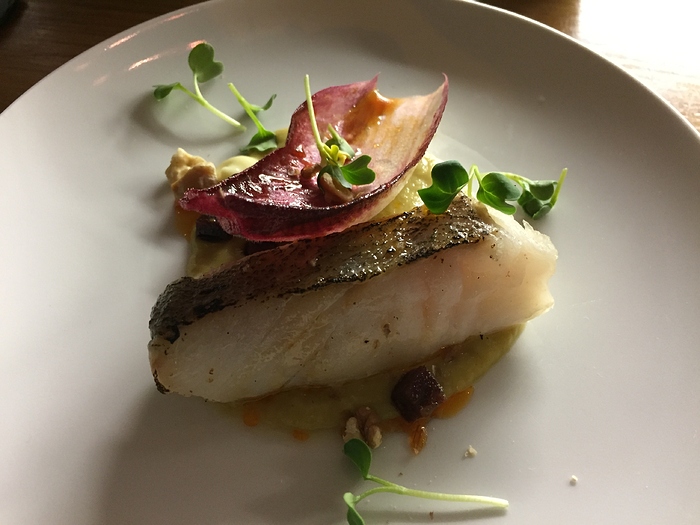 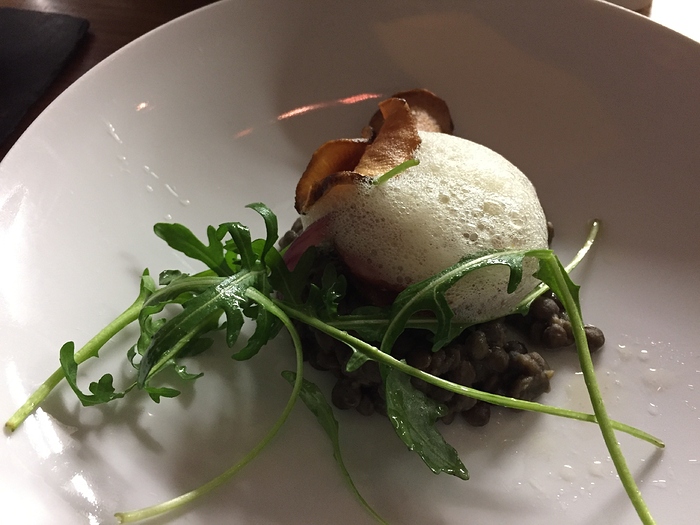 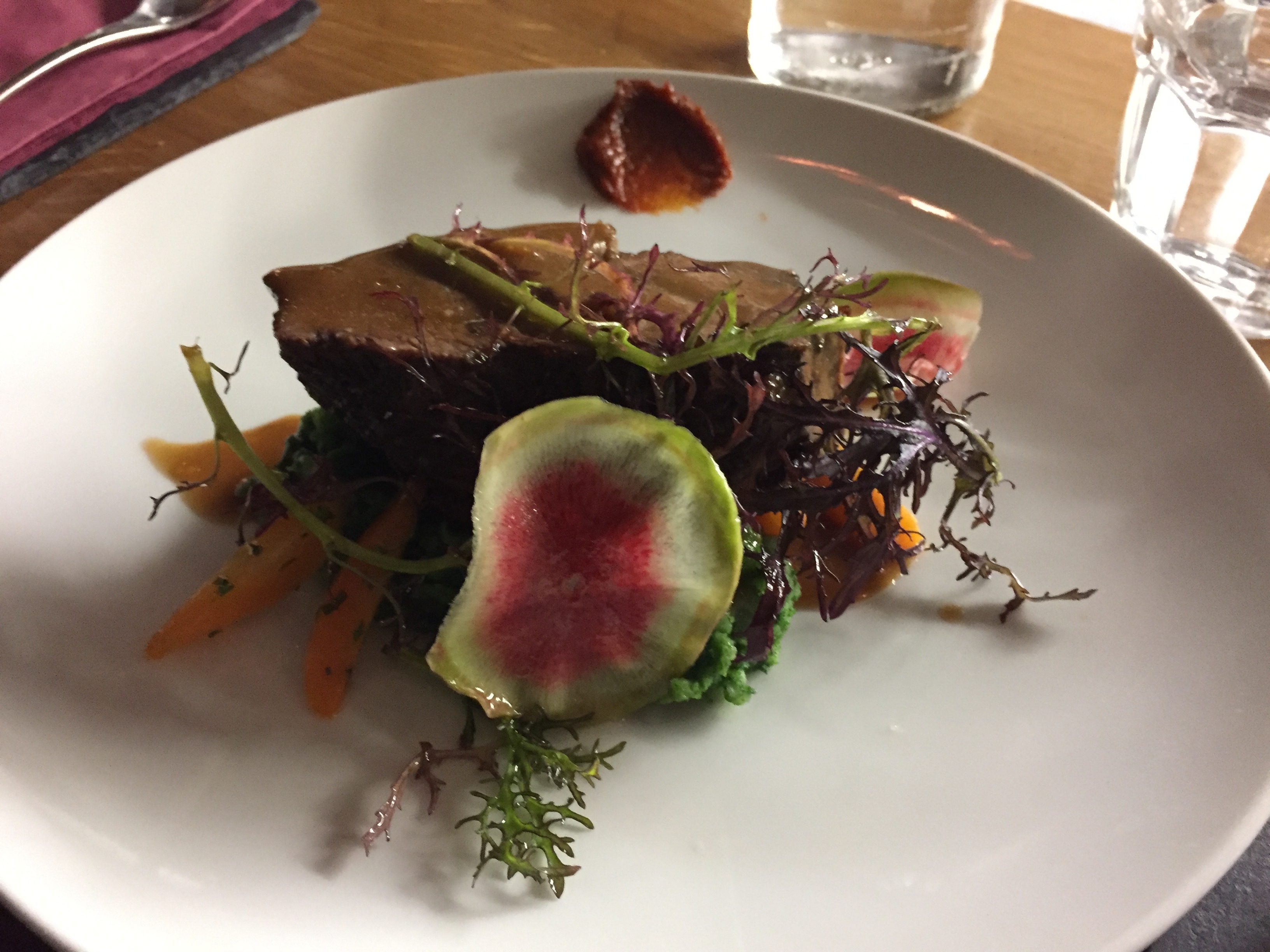 Cantal, apple compote with yuzu, black sesame. This was the weakest dish. I understand his loyalty to Cantal, and this was better than the chocolate buttercream he served with it in 2014, but still. Salers, at least! (Also, in 2014, he carved us off extra slices from the whole cheese, and his enthusiasm is contagious.) 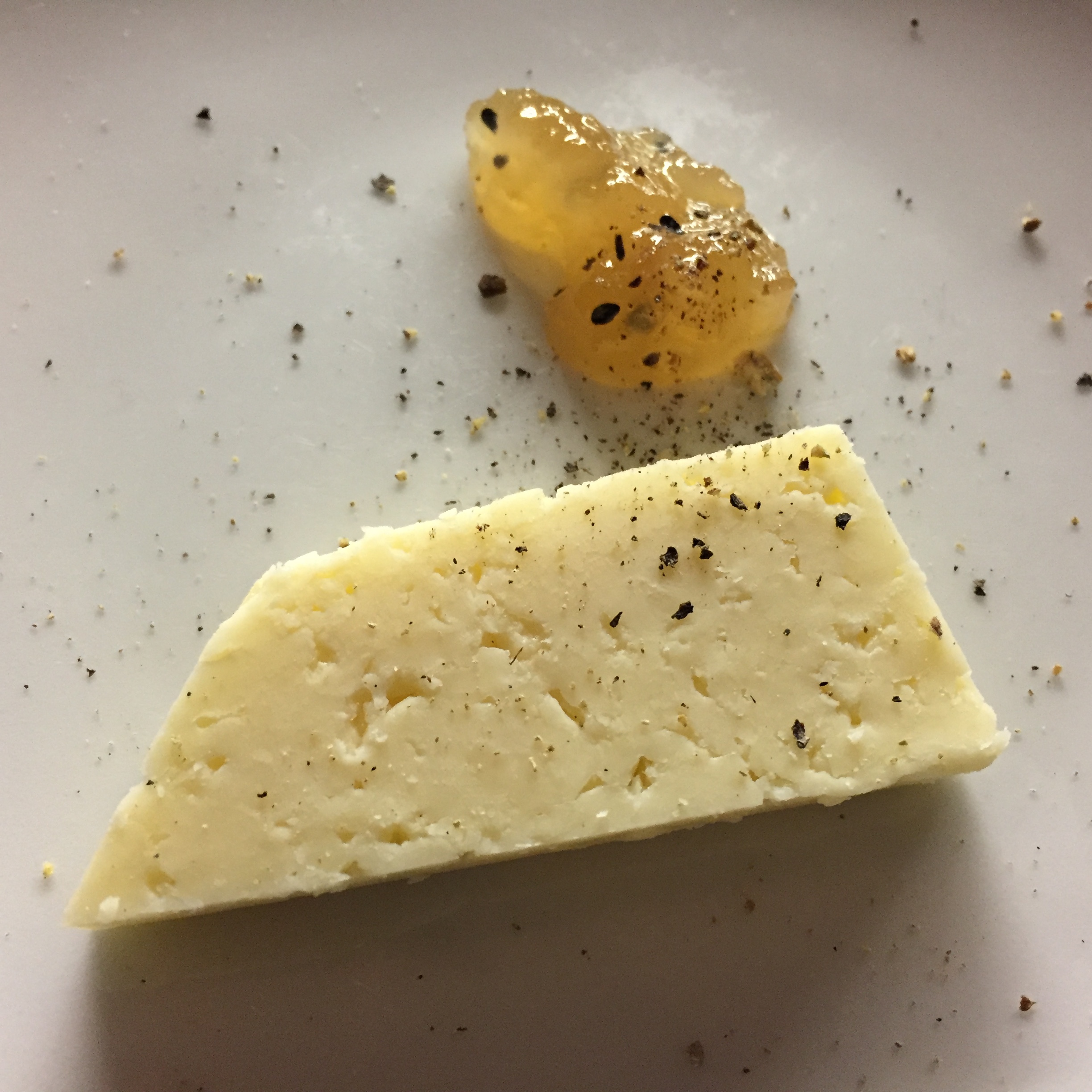 Lychee-shiso sorbet, grapefruit mousse and buttercream, crumble, Korean omija berries. I’d never had the berries before; they were quite good. 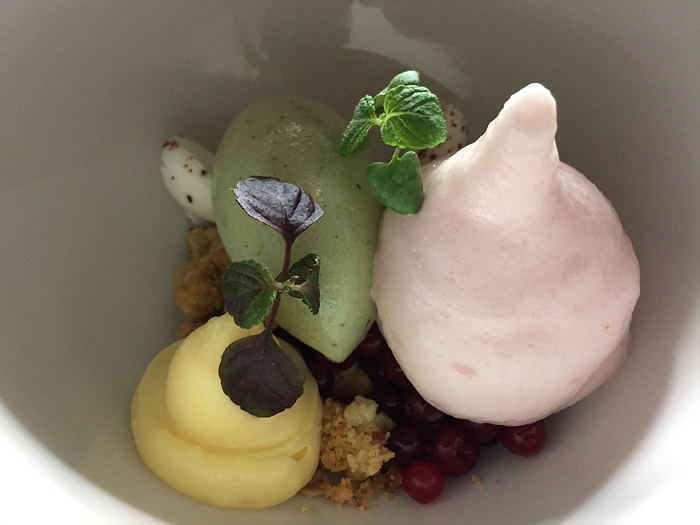 Cantal quibbles aside, this was a nice meal, but the Gambey meal was even better. I’ll do a followup post on that.

rue Gambey intersects rue Oberkampf, with PSB’s first address on the corner, and the second address is a few tens of metres to the north. At first glance, it looks similar, with more main-floor table space, and apparently no downstairs seating. While the space is more attractive, there is less knee room at the counter, for some reason. 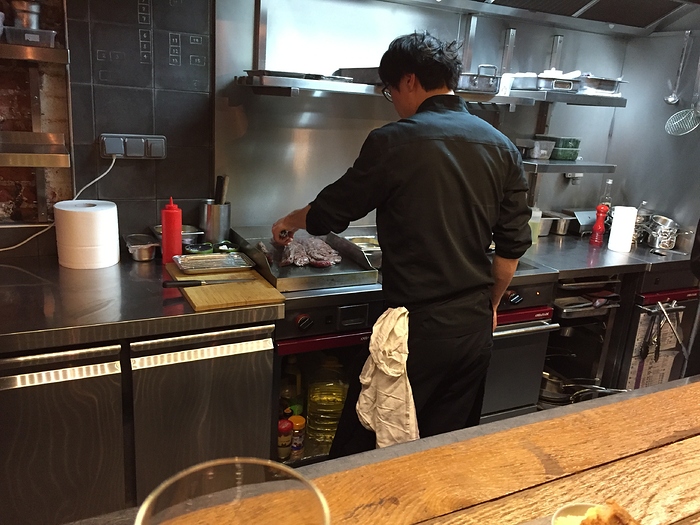 I had two glasses of wine (7€ each) at this meal, unusually: a Bandol rosé, and a Côtes-du-Roussillon. The table to our left had a bottle of Amalaya red. Argentinian wine in a French restaurant? Is that even legal? 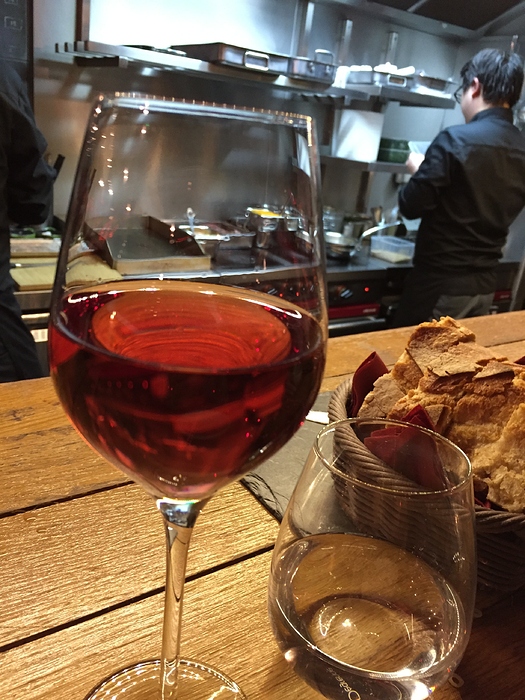 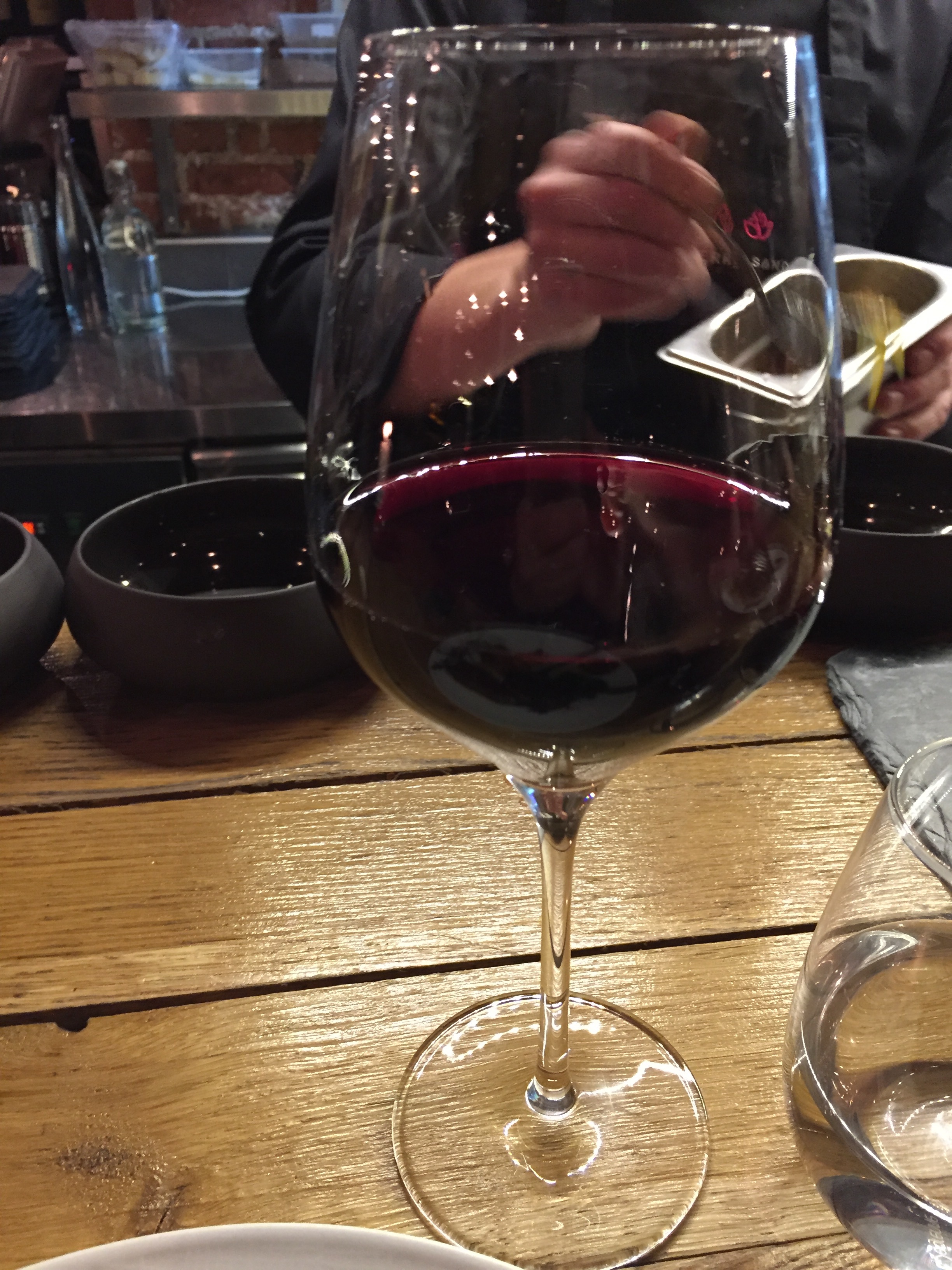 This meal cost 10€ more, and for that, we got a more inventive set of dishes, better plating, and better lighting for the photos!

Scallops marinated in mandarin reduction, fennel, sesame, crumble with squid ink. They seemed really proud of the squid ink, but I couldn’t really taste it. One server was very insistent on quizzing us on what we thought was in each dish, and we managed to impress her a few times with correct guesses; another just recited the ingredients as he cleared away the dishes. 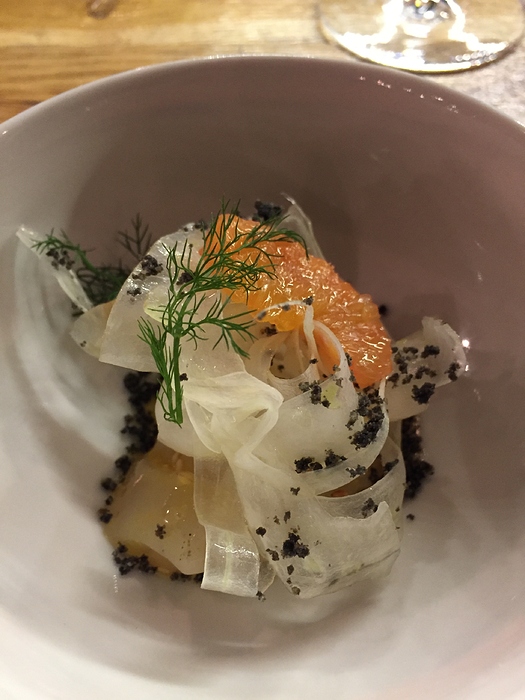 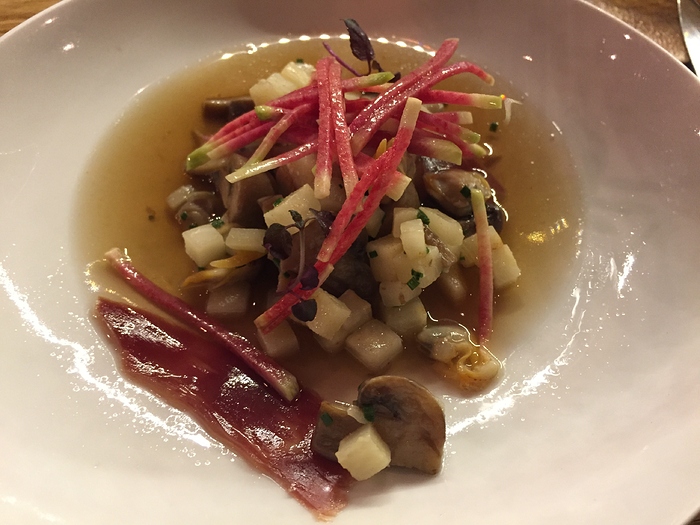 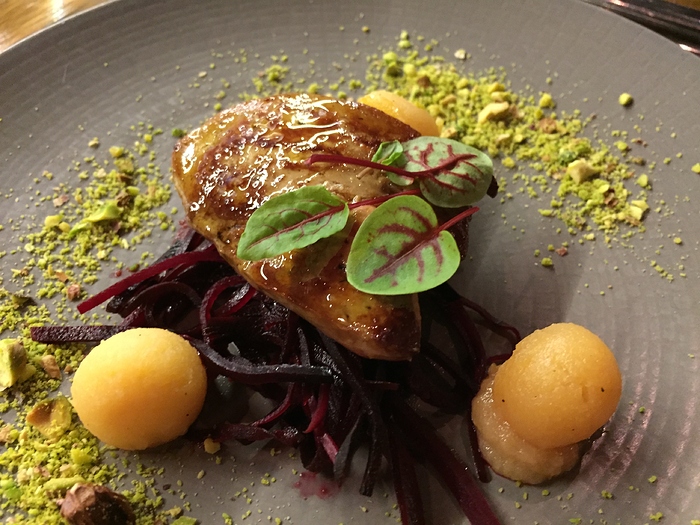 Black Angus onglet (hangar steak), kale, butternut squash purée, chicken/red-wine jus, ssamjang. This one was rough on me, because I have braces on my teeth, with some poky wire ends that require wax to avoid tearing up my cheeks. Onglet is tasty but very chewy; I had to cut it as thin as I could and my jaws needed a nap by the end. 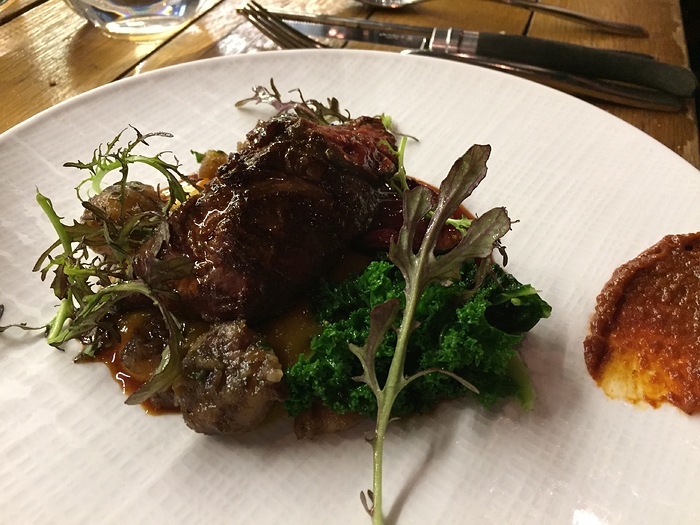 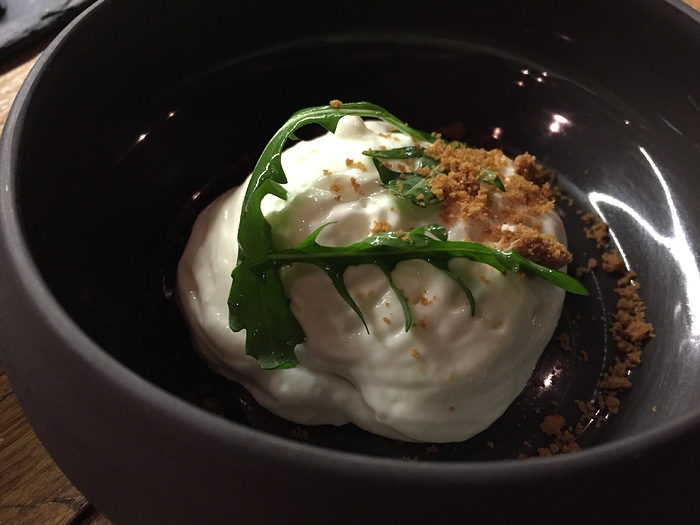 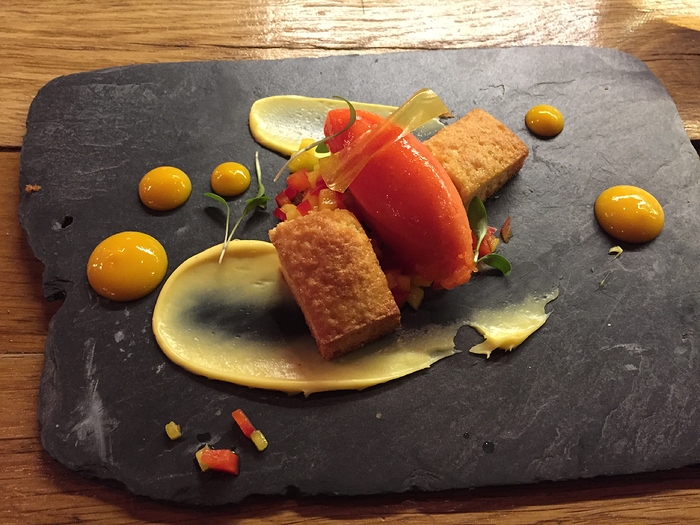 If you can only go to one? Go to the new address. But both are very much worth your while.

Thanks a lot, interesting reviews!

The combination of ingredients was quite interesting. Did you like it?

It seems you like Asian chef cooking French with the recent reviews. Do you eat in other types of French restaurants?

If you just gave me the list of ingredients, I would have been doubtful. But it really did all work together! Nothing stuck out, but it was not homogenous – each spoonful was a bit different, and when something new was carried to my mouth, it harmonized with everything else.

It is coincidental that I first posted about Asian chefs (well, not so much coincidence, as that was what was asked about earlier). I have some posts coming about meals cooked by non-Asian chefs.

My wife and I and a food loving friend who spends a lot of time in Paris ate at the Pierre Sang restaurant on rue Oberkampf a few years ago. We didn’t like it. We didn’t like the music, and we thought it was too loud. And we were not happy with the food. I don’t remember what we ate, but everything lacked focus. It was just not good enough to want to eat it again. Pierre Sang was there and he spoke with us. We liked him very much, but that is not a reason to return to a restaurant.

Thanks for these lovely posts (even the quick one on Chow is useful) and hope you’ll add more.

I have the opposite view of you about the two Pierre-Sang locations - loved the original from the start, tried Gambey once, then fled back to the original. Your pics seem to confirm what I didn’t love about Gambey - the plats seems to tip over from inventive to over-wrought, all variations on a theme of wee morsel of protein with accompanied by too many unrelated little sprigs, blobs and dashes. Different strokes clearly !

I can totally see Gambey tipping into overwrought; perhaps we were lucky. And that onglet didn’t seem at all wee to me, but I had to plow through it with misaligned molars! Someone on Chowhound mentioned the variation from night to night that happens with these restaurants. We don’t always get consistency even at more conventional places. I guess that keeps it from being dull…

[Edit: we originally didn’t book at Gambey, but decided partway through the conference week to give it a try on the weekend.]