Paper dosa is tricky. The outer layer has to be crisp, but not so crisp that it shatters when broken. The inner layer needs to be more pliable to hold it together when a piece is torn off, but not so much that it interferes with the crisp. Chennai Garden got it right, which is impressive. I would put this on a par with Saravana Bhavan, and above NY Dosas (though I really do admire Thiru’s pluck and I will continue to patronize his cart). 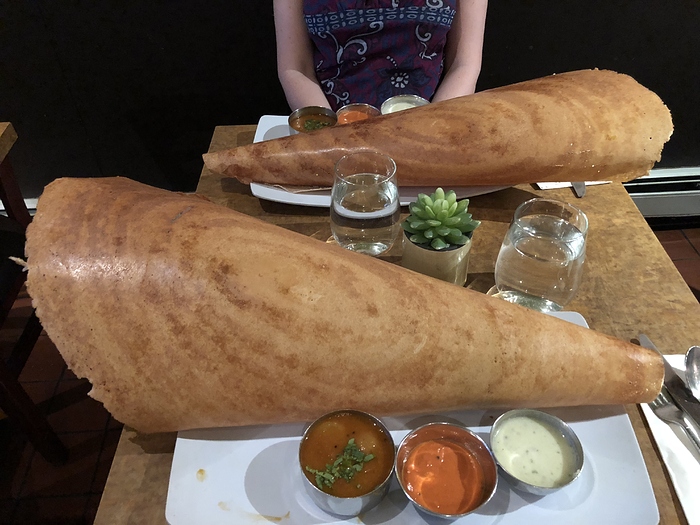 The dosa held its crisp all the way through to the last bite, also impressive. And a nice touch: the potato filling inside was put in a small metal bowl, like the sambar, so it was easily accessible and did not make the dosa soggy. I hadn’t seen that before.

I’ve seen reviews on social media complaining about the sambar, but it seemed fine to me, neither too gluey nor too watery. Tomato and coconut chutneys also good. Atmosphere and service decent, certainly better than Saravana Bhavan, which is notoriously lacking in both. We will return.

Any other Indian subcontinent places in this general vicinity we should try? I liked lunch at Haldi but Hemant Mathur has now divested. We live in Brooklyn without a car, so I cannot easily get out to the fringes (or even Queens).

I used to order in from Tiffin Wallah when i lived in the neighborhood, but from their website it looks like tiffin wallah merged with chennai gardens…? If so then definitely return to try more dishes.

Chote Nawab i’ve been to more recently with friends (including one indian), we all loved the meal and i know my indian friend has been several times specifically for the goat biryani

Kalustyan’s cafe upstairs is great for lunch or take away, hot dishes change daily and i think it’s about $10 for a selection of four dishes which is a lot of food. Make sure to buy some of the good yogurt or labne from the market itself

I spent the first year of my life in a residential hotel a few blocks south of Kalustyan’s, and have childhood memories of visiting with my parents in the '60’s. They would stock up on supplies and I would get a few candy-coated almonds from the old man. But he’s gone, someone else owns the business, and the cafe seems to be closed. (Also the prices on pantry staples are now higher than they should be.)

Yes, the full name of the place is “Chennai Garden by Tiffin Wallah”, and they have tiffins on display. The menu has north Indian and Mughal dishes on it, which I heard other patrons ordering. (I was the only brown person in the place at the time, besides the staff.) But good south Indian food is much harder to find.

Oh crap! I didn’t realize the cafe had closed…

The prices on everything at Kalustyan’s has been going up and up for a while so i just get what I certainly can’t elsewhere when i go.

Also Malai Marke in the east village has been very good, though my last meal there was maybe six months ago now

Malai Marke was another of Hemant Mathur’s places, but the only one he’s involved with now is the just-opened Saar Indian Bistro. While a place can keep its quality and even improve after a change in management, I’d like up-to-date reports to be sure. I may have to generate them myself…!

Yeah I’m apparently out of the loop…!
I actually just had an amazing indian dinner last night upstate in Rhinebeck at a place called Cinnamon if you’re ever up there.

Chennai Garden is my favorite South Indian place in the vicinity. I don’t go to Saravanaa anymore - the sambhar is spicy, oily, and sour - and the service matches. I went for lunch with a friend 20 mins before closing one day, and they told me they were closed - when I pointed at the time and the sign, the manager came out, looked at the sign, and shrugged. Ok then, no need to ever go back.

The other place to try is Anand Adyar Bhavan on 58/1st. The food is excellent, but the service is atrocious - at par or worse than Saravanaa. I was there for lunch with a group this week, the food came out completely randomly over an hour. But… masala dosa was crisp, sambhar balanced, idlis fluffy, meduvada fresh, and chhole bhatura spot on.

Anjappar in little India is excellent for chettinad chicken and meat, if you aren’t vegetarian.

Thanks for the report. Have you tried Saar yet? (I’m coming to New York from Boston soon and wondering whether it’s worth a try.)

(Love your forum handle, by the way!)

I haven’t been to Saar yet. Based on my past experience with the chef’s food, I bet it’s worth a try, though the new place hasn’t been open long and might still have glitches to work out.

Saar menu looks like he (or his wife, who’s actually the chef) is going for the newer/modern style at places like Baar Baar, aRoqa, etc. have you tried Baar Baar? It’s my favorite of the modern indian places (vastly prefer it to Bombay Bread Bar, for eg).

I hadn’t heard of these places (except BBB) which are probably a little out of my comfort zone pricewise. But will keep them in mind, thanks!

Indian cuisine in NYC (and possibly all of America) seems to have hurdled – pole vaulted? – over the job of producing great, authentic/original food straight in to the stratosphere of the new. There was not a single, really tasty, classic pork vindaloo in town (although Spice Market came close) before Cardoz leaped into his deconstructed version at Tabla’s Bread Bar, and its wan offspring at BB.

One’s largely better off avoiding all Indian food in NYC.

Saar, the one time I tried it, was awful.

plragde: Have you tried Pippali (on E.28th off Lex)? I think its still the same owner as Chennai Garden, but these things change around so quickly (& are generally non-transparent), so its hard to keep up. At any rate, of the 6 or so meals we’ve had there in the last couple of years, about half have been above Dhaba and the other places Hemant “owned”. The other half not so much.
The short lived hoopla about Hement’s involvement & intent to convert the 6 places into regional menus has now died out (a couple of them closed, Dhaba and Malai Marke returned to more generic menus, etc) & Hemant is gone from this group. We’ve since eaten at Dhaba several times and had mixed experiences. Our one foray back to Malai Marke was not so great either.
I’m still waiting for an above average Brooklyn place to open and sustain a solid level of cooking. Kinara was above average during its first year and several others have tried, only to sink into mediocrity pretty quickly. Please let me know if you find anything. I’m just not trekking out to N.Jersey for dinner.

I haven’t tried Pippali, but I will. I’m rather picky about Indian food, having grown up with good renditions of two regional cuisines. I am trying not to be as gloomy as @fooddabbler above, but I tend that way also. It also mystifies me why places can’t sustain a good standard. Vik’s in Berkeley is one exception for me.

The last couple of times I went to Chennai Garden, previously one of my favorites, everything was really way too aggressively salty. I went to Saravanna’s a few months ago and had a very good meal, though I go in not expecting great service there.

For non-vegetarian Indian food, I went to Masalawala on Essex St. between Stanton and Houston around February and was quite impressed. It was a bit upscale, so for that reason as well as dietary ones (I’m currently on a strict ketogenic diet), I won’t be back soon, but they were using really good, fresh ingredients and making very tasty food that didn’t shortchange the tastebuds on either the hot pepper or the aromatic spices.