Thanks to a tip from @hyperbowler, I ordered take out from Pan Fried Dumplings. I got the SJB, wonton with spicy oil (called red oil ravioli on the menu), and tomato egg noodles. The SJB was the hands-down winner, but I didn’t order their snowflake dumplings or their XLB because I had to drive an hour before eating and I worried they wouldn’t hold up well.

The SJB had shatteringly crisp bottoms and sides, and they come with a black vinegar/soy sauce and a red chili oil with a lot of Sichuan peppercorns, enough to numb my mouth. The other two items were ok, but I wouldn’t order them again. Not surprisingly given the restaurant’s name, the pan-fried dumplings were the best. 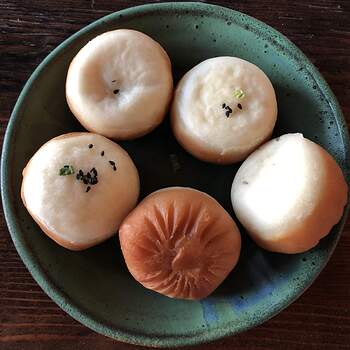 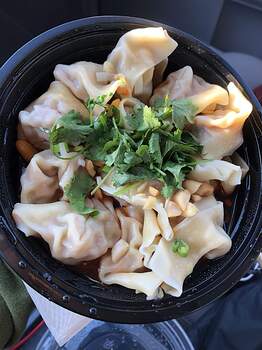 Ordering from their website was quick and they use qmenu like some other local Asian restaurants, but when you order some items like the dumplings, the pop-up window where you select the filling is all in Chinese. I can’t make out many words and Google translate came up with really creative menu items, so hopefully that gets ironed out soon. If I had more time, I would have ordered in person and asked them about the fillings.

I got a text message when my order was ready for pick up and the actual wait time was close to the estimated wait time. There is a table set up in front of the door with hand sanitizer and an iPad for ordering in person.

but I didn’t order their snowflake dumplings or their XLB because I had to drive an hour before eating and I worried they wouldn’t hold up well.

Simple solution, eat them all in the car!

That’s how my car smells like tacos this week…

The first picture shows the fillings for the snowflake dumplings as they appear on the online ordering menu. The second picture is what Google translate thinks they say. I can guess what some of the fillings are, but I was mystified by others like “three fresh meats.” 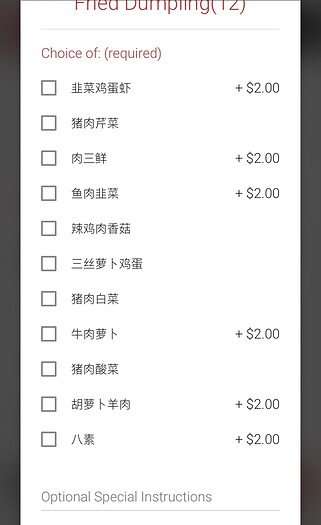 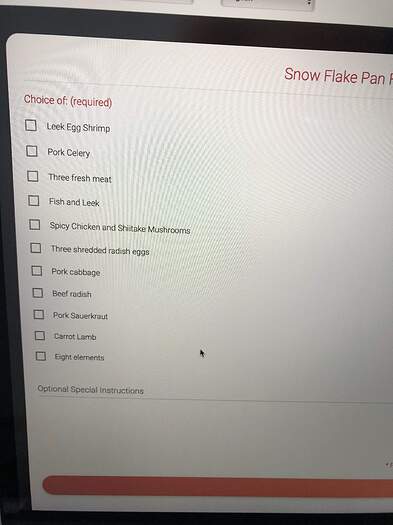 but I didn’t order their snowflake dumplings or their XLB because I had to drive an hour before eating and I worried they wouldn’t hold up well.

Simple solution, eat them all in the car!

That’s how my car smells like tacos this week…

Wow, @wildtomato I had no idea SJB would last an hour in the car! Next time, they’ll be the perfect at home dessert after some parking lot XLB!

I was mystified by others like “three fresh meats.”

Second time ordering at Pan Fried Dumplings. This time, I got the snowflake pan fried dumplings with “three meats” (@sck was right: shrimp, pork, garlic chives), more SJB, and “yummy pork buns.” The steamed pork buns were fine, but not a destination item. I’d definitely get the snowflake dumplings again and explore the other fillings, and of course the SJB. They vent the pan fried to-go items so they don’t steam and soften during travel. A black vinegar/soy sauce was with the SJB, and the pork buns had a pungent garlic/soy/chili oil. The last sauce could ward off vampires! Garlic was definitely raw.

Again, I had an hour between picking up and eating. The SJB were still crunchy as were the bottoms of the potstickers. Not as good as if I were to eat them as they were ready, but still good for the amount of travel time they endured. 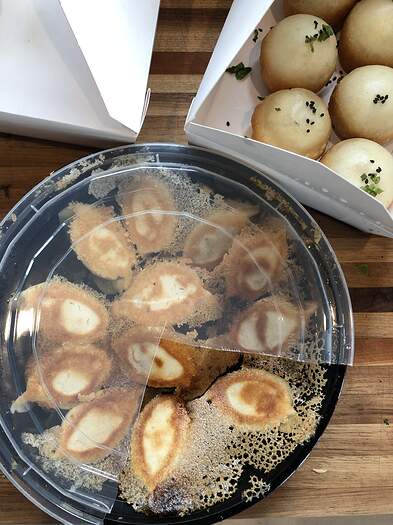 After reading the reports here, we tried Pan Fried Dumplings today. Order was ready at 12:01, and we ate them at 12:40.

Zha ziang mian: Sauce was too salty and was one-dimensional with too much bean paste. Edible but not very good.

SJB: Smaller than I thought they’d be, and very fried on the bottom. Almost seemed like the bottom halves had been deep fried, and the dough had an oily deep-fried taste. By the time we ate them, some (but not all) of the soup had soaked into the dough, but none had leaked out. These were tasty but also pretty heavy. Wouldn’t rush back for these.

Snowflake dumpling, spicy mushroom and chicken filling: Despite the car journey and the time in between frying and eating, these were great. The dumpling dough is colored pink (presumably to differentiate from other fillings) and the snowflake crispy bottom was pretty (though slightly overcooked in one section). The filling was very tasty, and these didn’t require any dipping sauce. They weren’t spicy at all, but had some nice crunch from what seemed like water chestnuts, and a rounded out, nice flavor. Hard to describe what it tasted like, but I definitely would return for these.

Overall, seems like this place is doing dumplings pretty well, and I’m curious to hear when folks try the other fillings! 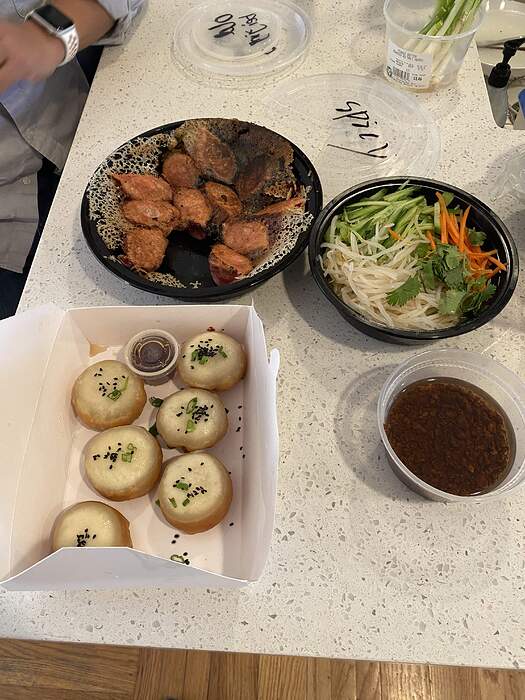