OP stated upthread that someone was brought in to make the paella.

OK thanks. Now this explained the fire used to cook the big paella…

Yes, they brought their own setup, including a gas tank.

That was the size of the pan I spotted at the Goodwill … impressive seeing it filled with paella!!!

How about keeping on the sunny side with “Pae-egg-a”? 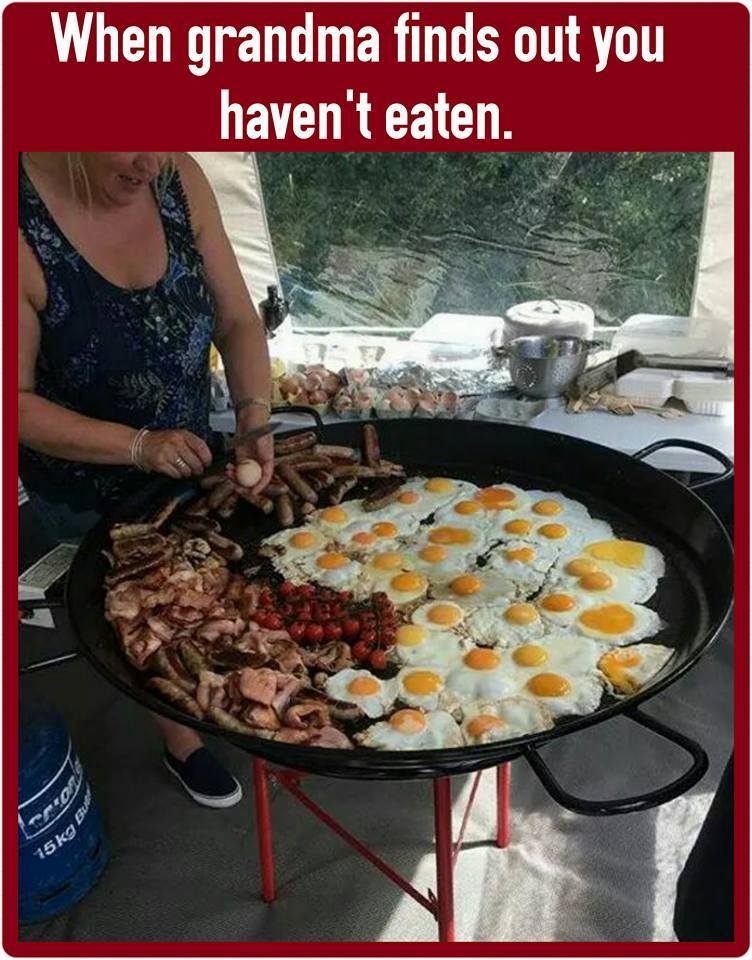 Great idea for large groups camping.
This would have come in very handy
back in the days when we organized
rafting and camping trips that averaged
anywhere from 30 -60. Breakfast was always
a pain in the ass…we had everything one
would need…but not this!

I love paella parties. I own a 36 inch garcima pata negra ( restaurant quality double thickness polished steel) pan , using my 39 inch emperor fire pit for heat, an 18 inch garcima pata negra , use my outdoor infra red grill as well as a 12 inch tin lined copper alcante paella pan. I seems you love parties and cooking. Why not consider investing in these pans which in the long run could save lots of money and it is also fun with guests helping and watching the cooking process. I typically precook my soffrito and my broth ahead of time using bombs rice with 3:1 broth ( typically fish broth from boiled fish heads and carcass cooked with vegetables and if I do not h ave enough broth, I would add white wine or clam juice. ) We cook outdoor even during winter here in the east coast as long as it is not raining or snowing. between an outdoor propane heater, the fire pit and also a nearby fireplace, the guests love it!

Thanks for the reminder. Last winter I bought a pata negra pan. It has been raining pretty much non-stop over the winter here. But spring’s finally here so its time to put the pan to good use.

i used it November, Dec and Jan cooking outdoor.
Live in the East coast but turn propane heater on, outdoor fireplace and we kept out coats on. as long as it is not raining or snowing, 50 degrees or so.
I use a 12 inch sertodo alicante tin lined copper for cooking indoor for just the family

i used it November, Dec and Jan cooking outdoor.Live in the East coast but turn propane heater on, outdoor fireplace and we kept out coats on. as long as it is not raining or snowing, 50 degrees or so. I use a 12 inch sertodo alicante tin lined copper for cooking indoor for just the family

We are Californians. Anything less than 60 and we hibernate indoors.

It has been raining pretty much non-stop over the winter here. But spring’s finally here so its time to put the pan to good use.

In winter, I cook the paella on the induction. Since I bought a pan a bit too big, couldn’t put in the oven. My recent paella a week ago! Enough to feed 6-8 people!

Sorry for that. I heard the gloves is not 100% bulletproof. When I’m using the mandolin, i go slow. But a few days ago, I had an accident with the microplane grater, nothing serious, sounds even a bit stupid, took an hour to stop the bleeding. Meal tonight was reheating the mussels paella I did yesterday. It was good strong taste of safran and smoked paprika and peppers [image] Added more mussels the second night, still good! [image]

how do you download(?) pictures here?
I take pictures from I phone, send it to my email address but can only forward it to another person’s email address but could not figure how to send it here. Educate me as to how I can transfer it to this site?
Thanks

You can upload pictures directly from your iPhone. After typing the text on mobile version of Hungry Onion, you saw the button “reply” on the left and upload button on the right. A menu shows up and you choose “photos” and the pict you want to upload. When you see the upload is finished you press “save”. That’s it. (Not talking about the interface on the iPhone, but The typing keyboard in safari in HO.)

Just arrived home , long weekend away
Packed my IPAD instead of my lap top but could not respond thru IPAD, repeatedly asking me to register again.

I am not rcomputer savvy, only use my IPHONE to make phone calls
I can take pictures from it, also from my IPAD but only store it in them .
Neither do I text using the IPHONE bec I am handicapped with ulnar dystrophy , unsuccessful surgery as well as osteoarthritis.

Still love to cook, had at one time thought of going to culinary school when I retire but gave up since these problems. in 2008. Growing up, learned how to cook watching my mother ( you should see her chop vegetables, just like the Japanese chefs at Benihana), then ,had to cook when my husband was diagnosed with gluten enteropathy in 1972. Had to get challenged as he loves eating! He passed away from MDS in 2012.

Now, I basically cook for my son who invites his friends over when he is not traveling. He says that my paella is the best although he lived in Spain many months a year for 12-15 years or so! I will ask him if he can send pictures of the paella ( 12 inch on my sertodo alicante copper pan, 18 inch n my pata negra cooked on the infra red grill and 36 inch on my emperor firepit) .My son’s taste are quit different from my husband’s who not only like ethnic food but his sauces. He loves rich food whereas my son is more of the paleo
type. Butter, cream, duck fat etc is no problem for Bill as he is a coeliac. When he was diagnosed in 1972, gluten free product or cookbook was basically non existent. I was asked to write a cookbook for NIH but declined bec I was busy with my practice , also never measure when I cook. Instead, I was always available to offer cooking advise to anyone who they refer to me.

When I went away for this past long weekend, I packed one my small traditional cataplana dish to cook top of my sister’s gas stove top. Cooked squid, shrimp, clams in basic sofritto ( recipe used for my paella- brown chorizo sauteed with caramelized onion, garlic tomatoes, carrots, peppers,) , add some white wine and the sea food steam for 14 minutes!) I actually have 4 of them. Plan to sell one on EBAY at my cost ( imported from Portugal) used only once but no taker so far. It retails 329 on amazon although I advertised it for 135. Will withdraw it as I am not going down further. I decided to have two custom made ( 100% man made with thicker copper) instead.