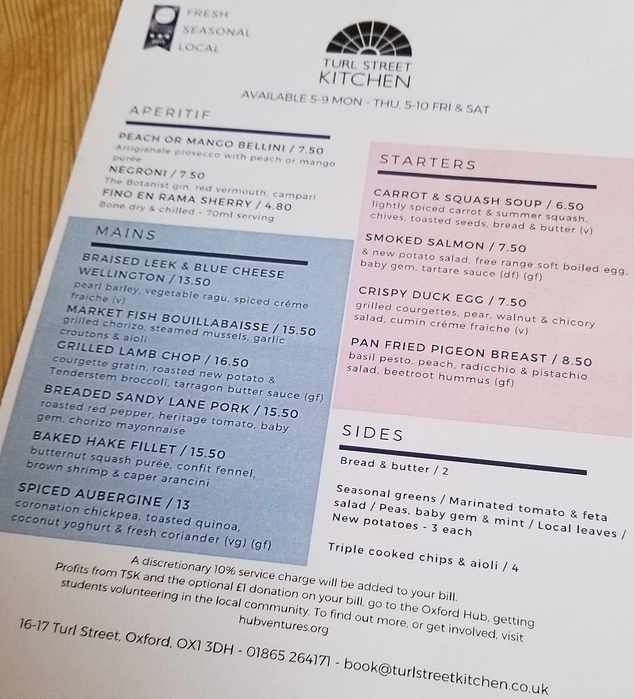 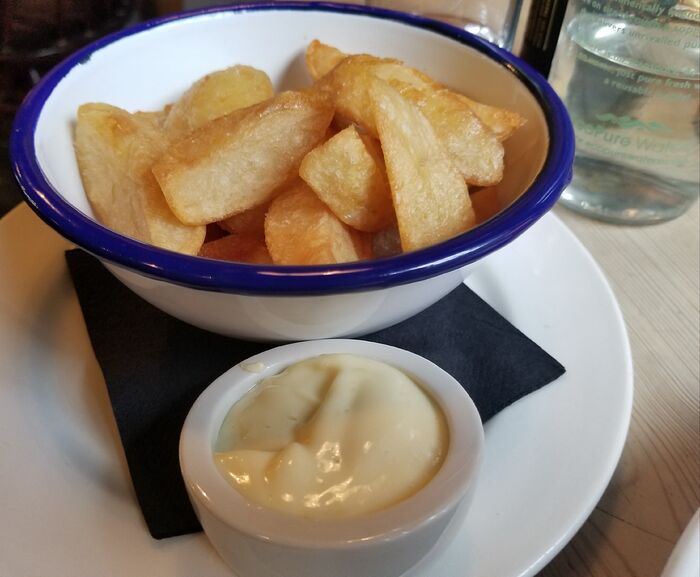 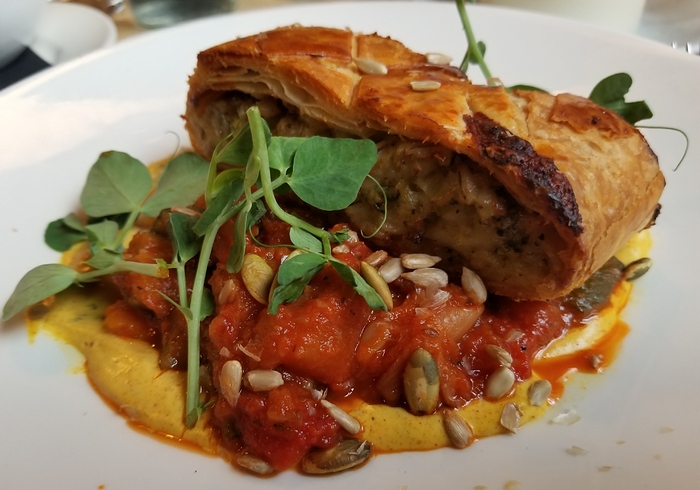 Cauliflower Panzanella with burrata at No 1 Ship St 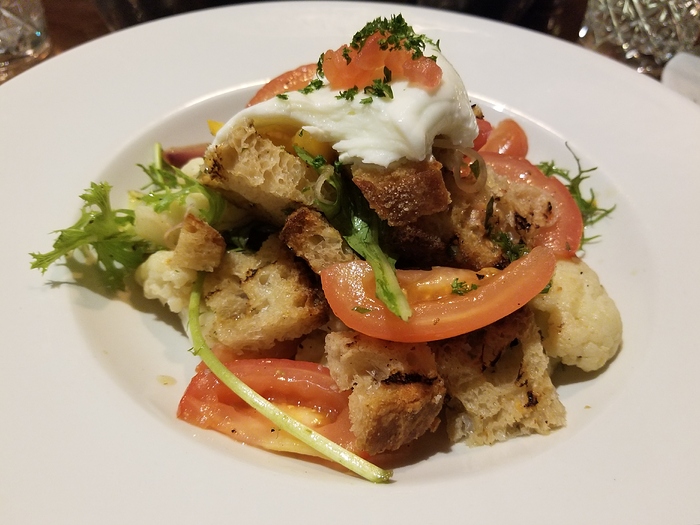 Maybe thrice fried but they still look under cooked to me. Southerners, eh? Shouldnt be allowed near a chip fryer.

haha
still much better than Cdn chips. I’ll be closer to the real deal soon!

I’ll tack on our other Oxford meals here.
Breakfast at the Vaults and Gardens Café. Vegetarian breakfast for 8.5 GBP. Good cappuccino . Neat spot. 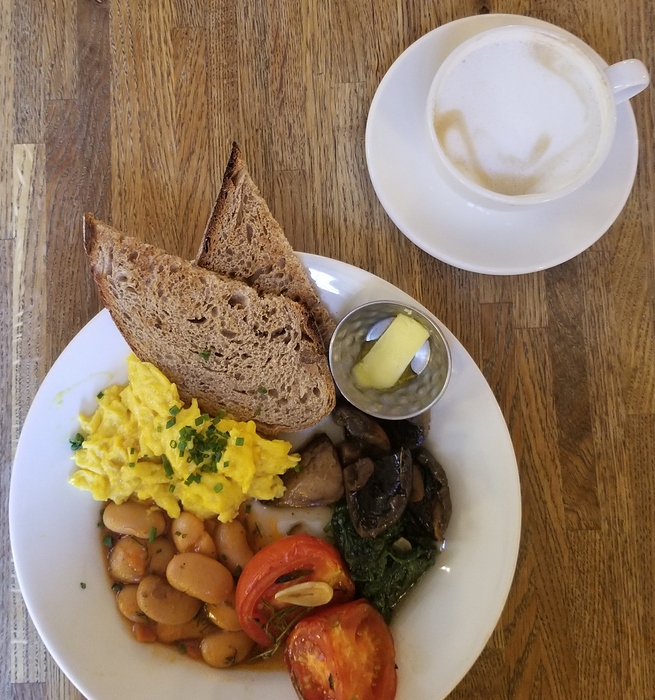 Lunch at The Nosebag. I had an grilled veg artichoke bocconcini salad (heavy on the marinade/dressing) and a peanut wheatberry salad, my DC had a leek and potato soup with bread. Cakes looked good. Bang for the buck. Cafeteria-style spot.
Decided to go to the Mitre for old time’s sake. Wasn’t in the mood for anything fancy or anything pushing any envelopes, and my DC preferred a traditional British menu tonight. Fish and chips were fair ( would be at the same level as an average pub fish and chips served anywhere in Canada, but I’m ok w that, was not expecting more) Sticky toffee pudding was surprisingly very good.

Our fellow poster, @PhilD, once offered advice about ordering fish & chips in pubs. There is, disappointingly, some considerable merit in the advice which runs generally as:

Only order it if the pub is (1) within sight of the sea and (2) has a reputation for good fish & chips.

(By the by, unless I’ve missed something, Phil doesnt seem to have posted in ages. I wonder what’s become of him. Or, for that matter, zuriga who also hasnt been around for ages. )

I think that’s a rule for people who live within an hour of the sea.

I see fish and chips like pizza or coffee. I appreciate the very best (the 10s), but I’m content with the 4s, 5s and 6s, especially if I just want a quick meal.

If I lived in Newfoundland, Nova Scotia, the UK or Ireland, I’d be fussier. I live in TO, and I ate fish and chips at pubs, even crappy chain pubs, when I lived in Calgary, and I order fish tacos at ski resorts in Colorado.

The best I’ve had, have been in Halifax NS, St Johns NFLD, Budleigh Salterton and Torquay. I also have love for Captain Highliner.

I knew these would be mediocre. I don’t like the word meh so I use fair.

I would much rather order from frozen fish and from frozen chips at a pub, rather than a veggie burger or a quesadilla when I’m in England. I haven’t been ordering much meat lately as I transition back to pescatarianism after 12 years of eating everything. Over the last 5 days, the grouse at Rules, a sausage roll at the Bloomsbury Hotel’s bar, and beef at a college dinner are the only meat dishes I’ve eaten. I have to keep my cheese intake to a minimum while traveling, so I don’t tend to have more than one cheesecentric main a day.

I had debated leaving out the fact I had fish and chips at a pub/family resto with pub food, since I didn’t have anything nice to say, and the fact I ordered them at a spot that’s a very middle of the road option wouldn’t give me much food cred on this board. I decided to mention it since I’m working at being less food focused after years of obsessing online about where to eat on trips. I think the Red Lion or The Bear maybe would have had better pub food.

Fish and chips or panfried salmon were the only 2 mains I would have ordered on that particular menu tonight.

My rules for the UK and EU, as a Cdn visitor

It’s too bad PhilD and zuriga have not migrated over here.

Hi John - limited posting I am afraid. I have become a bit of a climate warrior and tend to battle the anti renewables pro coal posters that appear on various forums. Coal is one of Australi’s significant assets so there is a lot of cash floating around to keep it front and centre in the electricity mix…I do my little bit to restore balance.

On the eating front we have visited every Australian capitol city this year to test the restaurant scene. Very mixed results. Melbourne is by far the best which contrasted with Darwin where the best food was in the airport lounge on the way home…!

Fair point. I suspect even most Britons don’t realise none of us live more than 70 miles from the coast. And your rules for travelling hold good for any traveller - on our only visit to Canada, Mrs H was particularly pleased to see and try Ontario wines. Maybe not as pleased as I was to see moose on the menu!

@PhilD
Phil - welcome back, mate. Been missing your contributions. I have an e-pal from a non-foody forum who used to be a cop in Melbourne and always used to write about how it was such a nice city. He’s retired now and moved to somewhere near Brisbane

Melbourne is by far the best

I think I am testing the limits of the UK Forum but I’m curious about this. I was born in Sydney, and when I lived there Melbourne was known for good food, but Sydney was too. Sydney especially for Asian food. Has Melbourne really stormed ahead far ahead of Sydney recently?

Dean - I am sad to say it has as I live in Sydney. I think Sydney has gone for the more luxe restaurants, or those that are heavily themed - the concept being more important than the food. Whilst Melbourne seems a bit more food centric with both more breadth and depth (and cheaper). The Merrivale Group tends to dominate Sydney with some really great chefs and restaurants but I must admit they are getting formulaic in their set up (although all themed differently), whilst Melbourne has lots of great old pubs with local character and some top chefs cooking (or supervising).

As you say Sydney was the place for Asian food but Melbourne seems to now have the edge. ChinChin is a Melbourne hit that just opened in Sydney with massive queues. And places like Supernormal are very good. Indian is also hot and trendy in Melbourne - Tonka, Hello Aunty, and Babu Ju. But in Sydney one of the top Harris Park Indians opened in the city and proudly declared it had de-spiced dishes for the city tastes…!

I think I am testing the limits of the UK Forum

No worries, mate. We’re tolerant of the colonials.