On the Deck (Atlantic Highlands, NJ)

Despite working in Atlantic Highlands in one form or another for 10 years, last night was my first visit to On the Deck. I went with a friend who is a regular. They have both inside and outside bars and seating areas which overlook the bay and marina. I had been to their sister restaurant Off the Hook a few years ago and it was decent enough. Their menus are nearly identical.

The place was absolutely packed with a 30 minute wait for a table. We snagged the last two seats at the bar and grabbed a drink. 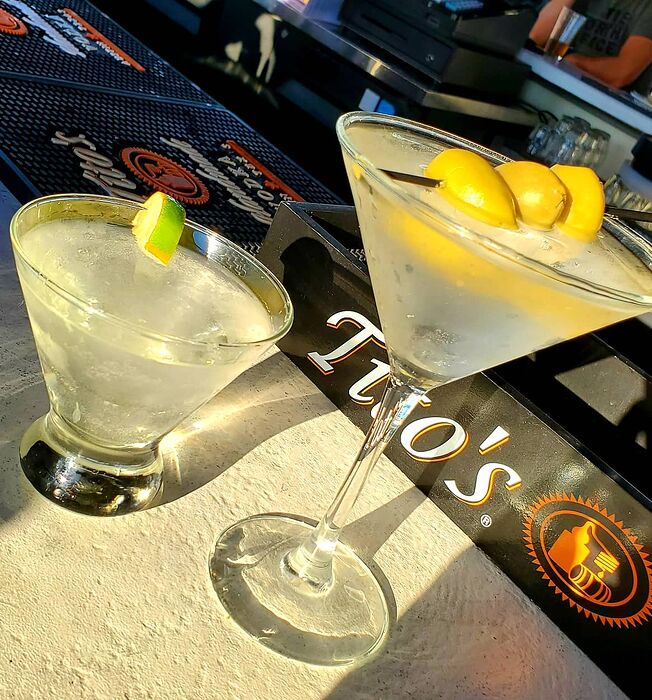 When we were called for a table, it ended up being inside but right at the windows with a perfect view (and air conditioning). We shared the lobster stuffed avocado which is one of their house specialties. Both halves of the avocado were loaded with crab meat, and not too much mayo and celery. This could have been a meal in itself. Very refreshing. 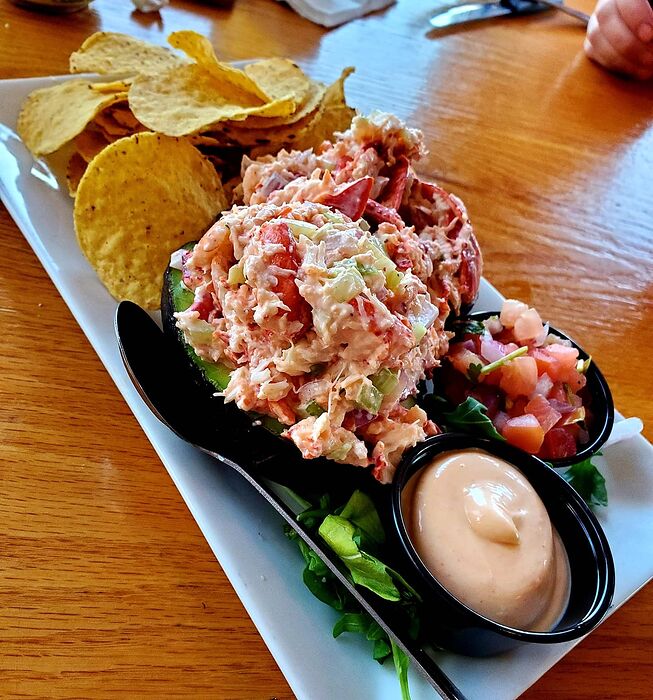 For meals, I had a crab cake sandwich and she had fried flounder. Mine was good-- not standout, but at least plenty of crab meat and definitely not frozen. 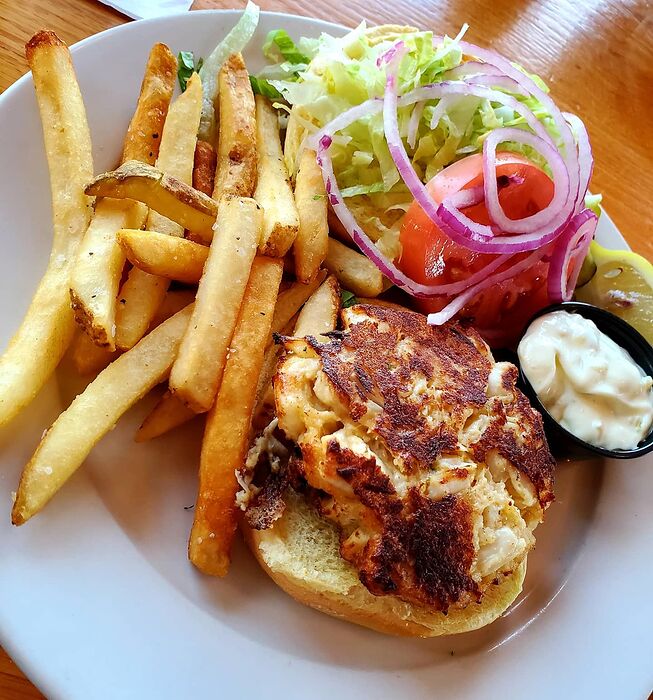 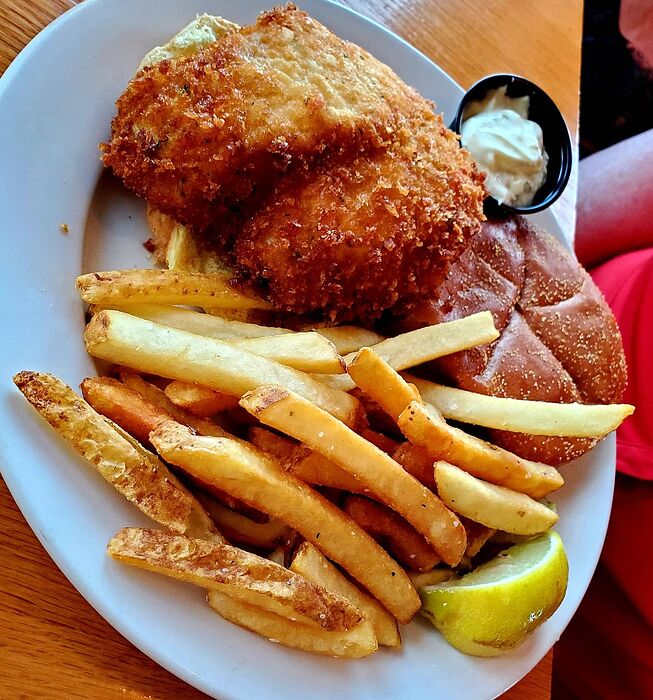 Like their other restaurant, you are there more for drinks and a view than food, but the food at least was above average. That lobster avocado is the real centerpiece of the menu. The rest of the apps would probably qualify as pub grub, and the sandwiches/entrees are run-of-the-mill for a waterfront restaurant on the bay.

I would return. It was nice to be part of a crowd. 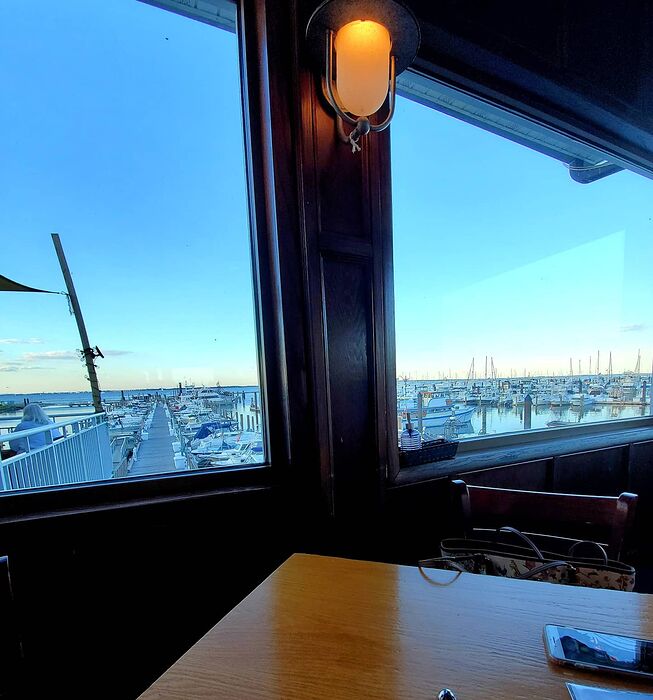 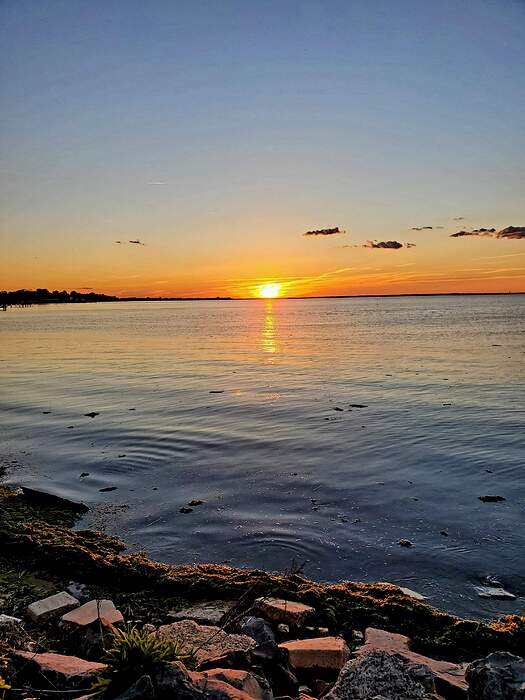 Lovely lovely photographs. Have a healthy and wonderful summer.

My son played sports over at Croydon Hall so Off The Hook became my hangout between 6-9pm Mon-Friday. This was during football/off season but they put a nicely heated tent over the deck (way before covid) and kept the outside bar open year round. Two things I remember $5.00 Stoli Martini’s and their fried grouper fingers were very good.

Otherwise like you said everything else was ok-good but the bar was definitely the draw. I met a lot of interesting people there, including the head chef at Monmouth University.

You had me at

That’s pretty much when they got me too!!!

No joke though about 6-7 years ago that was their off season martini price.

I would still go back any day of the week because the views are great, the food is decent/good but what @gcaggiano failed to mention is the reasonable prices. It’s a good deal for the location(s).

Thank you. Same to you!

We went to On the Deck for the first time today. For us, a late lunch. Usually at that hour, restaurants are not very busy. However, at 3 p.m., On the Deck was hoppin’ probably because it’s a Federal holiday (Juneteenth), and lots of folks have the day off.

The weather could not have been more perfect for dining outdoors.

We both started with New England clam chowder followed by fish and chips (an order for each of us). For dessert, we shared Key Lime pie. Mr. R. had an IPA while I had lemonade.

The quality of the food was far above our expectations. The chowder was one of the best we’ve had. Rich flavor with lots of clams and potatoes. The beer-battered coating on the haddock was impressive. Extremely crispy with no hint of oiliness. The Key Lime pie was excellent, the perfect ending to a great meal.

We’ll definitely be back!

I love to hear when a place does fish and chips right!

Glad to hear they are still putting out decent/good food! Also, glad you enjoyed!

Before going there, I took into consideration what you and @gcaggiano said about the food. For the kind of place it is and the type of menu, which I would describe as pub food, what we had was definitely a cut above.

We sat in the entirely open air section of the deck, first at a table in the sun and then moved to a shady table. As you said, great views, including the Verrazano Bridge in the distance.

Maybe the food has improved. Was there a couple of weeks ago for drinks and had nachos as a snack which were good but not standout. Can’t beat the view at sunset though. 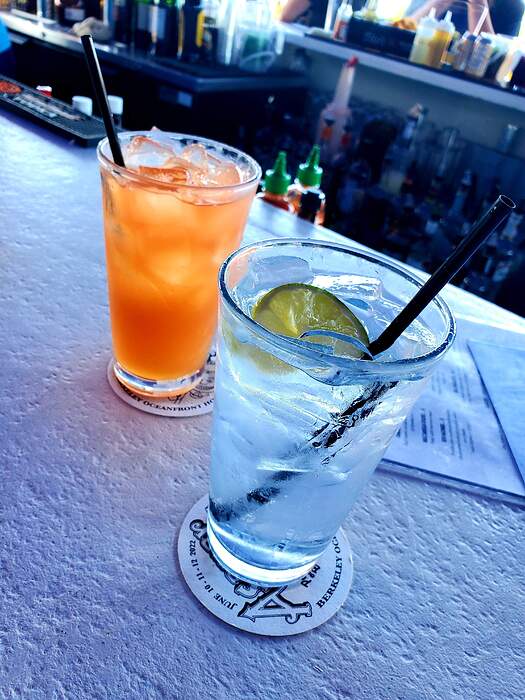 It’s possible they do some things on their menu better than others. We don’t eat nachos — not at home or in a restaurant. But since you do, you are able to judge how good their nachos are compared to other places. Also, there is the question of consistency. For example, if we order fish and chips again, will it be as good? TBD….

This post is in regards to On the Deck’s sister restaurant a few miles away, Off the Hook. I didn’t want to create an entirely new thread.

Anyway, we ordered lunch from there the other day at work. I didn’t get anything. My coworkers’ various meals looked “meh” at the very least. I call attention to one meal in particular, pictured below, which was the calamari salad (the greens are in a separate container). The menu advertised sautéed calamari, but if you look very closely (it was easier to see-- and feel, of course-- in person), you will see little bits of breading on the calamari. 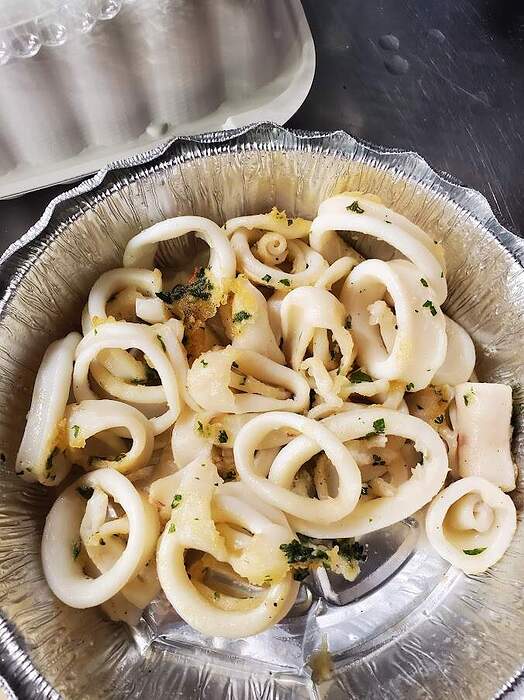 It appears as if they deep fried breaded calamari as you would for a fried calamari appetizer and then attempted to remove the breading (or removed breading before sautéing). My coworker was just not having this and called and asked if that was the case. The manager or whoever they spoke to got very defensive and said that they do not have fried calamari on the menu (which is true) and they do not deep fry their calamari. This also may be true, but my coworker explained she would not eat this because of the breading and offered to send a picture. “You can bring it back to us, that’s what you can do”, the manager snapped. Being at work, she was unable, so another coworker who was about to leave drove the calamari back to Off the Hook along with the credit card and got the refund. It was there that the manager reiterated that it was not breaded calamari, but then explained, “If there was any breading on it, it was because there was already breading in the pan from a previous dish they cooked.”

Does that make it any better?!?!?! Sautéing one meal after another in the same pan? What if someone with Celiac or a gluten sensitivity ordered this and didn’t notice before taking a bite? A very bizarre situation. The person was refunded, so that’s that. But just a very nasty overall attitude and a terrible way to handle ingredients.

I’d like to pretend to be shocked, but this is exactly why friends of mine who have dairy and gluten allergies are rarely willing to eat anything they haven’t prepared for themselves.

So put that on a place I’m not going too.