I found this article Helen Rosner wrote for the New Yorker interesting.

I’m posting it under NY et al, since I think I might be one of the only people posting from Eastern Canada. As of last Saturday, no indoor dining will be allowed at restaurants, pubs and bars in Toronto, Peel Region (several cities and burbs west of Toronto) and Ottawa, for at least 28 days.

I’ve only had 3 indoor meals since March, and I was fairly anxious when there were more than a couple other diners. Lots of restaurants have been investing in heaters for their patios, to extend patio season. Truth is, I’m even anxious on patios, so I only visit patios that are relatively empty, with tables that are 10 plus feet apart. That means mostly pubs with backyard patios. 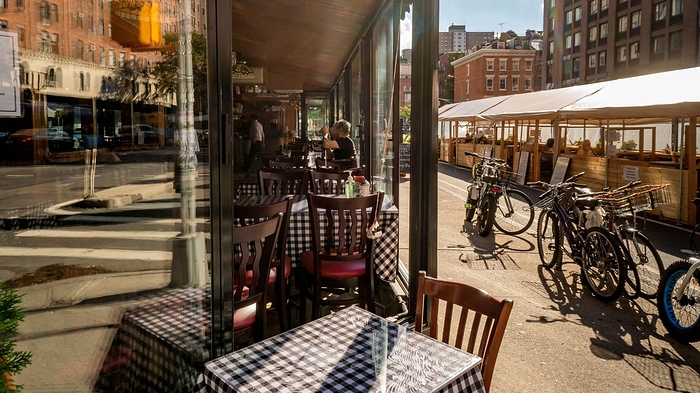 The Uncertain Promises of Indoor Dining in New York City

Restaurants—and customers—take another teetering step on the city’s jagged path to recovery.

Reading this is so heartbreaking. I have started going into my office in Midtown Manhattan every couple of weeks recently, and the number of empty storefronts is just tragic. I ordered lunch from a sushi joint in Hell’s Kitchen last week and noticed as I was browsing Seamless that quite a few of my usual spots are no longer there - whether they are closed permanently or temporarily is sometimes unclear, but the signs are not good.

Personally, I have no problem with outdoor dining - around here, most people are quite good about wearing masks when not seated at their tables and restaurants have done a good job spacing out tables and keeping things spic and span. We have only dined indoors a couple of times and never in NYC - I honestly don’t know how any restaurant in the city could set up their tables safely or provide adequate ventilation. Until the weather gets uncomfortably cold, we will continue to stick mainly with outdoor dining; after that, we’ll see where the numbers are and whether the risk feels worth the reward.

It’s not like the national media cares much about the Left Coast (ok, we get more love than canada), but in my area, indoor dining has just been approved (based on which county and their stats). Frankly, I won’t be doing it anytime soon, and haven’t done it since March. We get a fair amount of take-out and have a fair number of sit-down-outdoor meals, the benefit of our climate, but my look at the science says I’d rather spend my “risk budget” other ways than indoor meals, like having friends over in a carefully choreographed outdoor dance of utensils and BYOT (bring your own table). We’re now approved for outdoor gatherings up to three families now, and I’ve carefully prepared the yard and put out lights and had the tree trimmed so we’re where one of our circles of friends comes together. The grill’s seen enough use that I’m now cleared to replace due to age, and repairs must be made for the small patio heater although we have a warm spell coming up this weekend.

In my exact region we have small cute downtown areas which correspond to train stations from San Francisco to San Jose. Each and every of these stations has a small restaurant and shopping district, and I’ve always wanted them to close the street to cars and have a real pedestrian experience. Why did we ever need cars on that one street? No one can park on that street, deliveries are made through the back, parking is on the sidestreets or garages. Since COVID, every single downtown has closed its streets to some extent, and we now have an extraordinarily pleasant downtowns where people can stroll and have a bite. A few favorite restaurants suddenly have more tables than they ever used to. Some have fancy decked-out parklets, some are lower key. The change to pedestrian walkways was long overdue, really, silver linings anyone?

What’s happened to our restaurants? I wouldn’t use words like Heartbreaking, at least not here. It’s not. 30 years ago we had fewer restaurants, now we do again. Prices at restaurants are much higher, the dining public has been willing to “support” and look the other way at prices that might have been considered eyebrow raising previously — I think they will need to come down. I’ve lost a few favorites, but I’ve come to find favorites of mine that weren’t doing so hot financially. Most are weathering the storm. I might be heartbroken if my sentimental favorite Moshi Moshi up in sf (which you’ll never see on a michelin list) closed, but the transition to outdoor dining wasn’t marred by NYC’s changing rules. Our local New Orleans place busted out a pretty cool airstream bar - I had worried about them, but they have signs of life now. I notice most neighborhood spots have reduced hours, especially closing around 7:30 or 8, and the owner and family are working every single day. Hard on them, hard on displaced staff. Some terrible service - I’ve several times found a waitperson who were on literally first days, drafted because they are family and get things horribly fouled - I make a point of finding the owner and laughing it off.

I think it’s certainly true that our excellent weather helped immeasurably; the flexibility of cities and the state ABC to relax rules and approve “parklets” (takeover of a parking space) has been key. If any restaurant wants to “go extra ghetto” with their parklet, it’s easy. Just rent a bunch of “jersey barriers”, have them brought in by truck (road construction often requires renting these barriers on short notice, there’s a whole business in that), and put out folding tables. One of our favorite places did just that and doesn’t have table service, which is fine by us. We still get a table and a beer and a burger, and what’s wrong with that.

We’ve had new openings - I went to a new place last week - and there’s a new Singapore place opened last week that’s On The List. We’ve occasionally been meeting friends for outdoor meals too - there’s a Taiwan style Night Market, met some friends and sat at other ends of a long table, had strange fried things and dumplings.