My sister and I had omakase at Café Sushi last Friday night but I have not had time to post about it till now. Wow. The price for omakase has gone up to $90 but at the same time, they have taken things to a different level. There are not a lot of meals I am willing to drop $90 for, but all I can say is that I felt I got my money’s worth.
Where in the past each piece of pristine sashimi or nigiri that is part of omakase has had a garnish, now most have multiple tiny garnishes and while you can taste them, they never mask the deliciousness of the fish but only seem to amplify it or add an interesting texture. There were also more pieces of fish that had been cured or smoked somehow, and again that never masked the essential flavors of the fish. But clearly it is all more labor-intensive than it used to be. I have learned to make reservations at the sushi bar and specify when I make them that it is for omakase. That way you get seated in front of the two chefs who seem to make all of it, which is really fun.
(By the way, some of us have wondered in the past how it is that omakase at Café Sushi is so special but the regular sushi menu is not. The answer I think is that the regular sushi menu is made by different chefs than omakase and the items labeled “chef’s special”. It is almost as though there are two different sushi restaurants being run there.)
I did not take enough pictures because I was so in love with my food, nor do I remember specifics (pics 2 and 3 are of the tsukemono (?) course that they often serve) but I can whole-heartedly recommend the experience.
http://www.cafesushicambridge.com/ 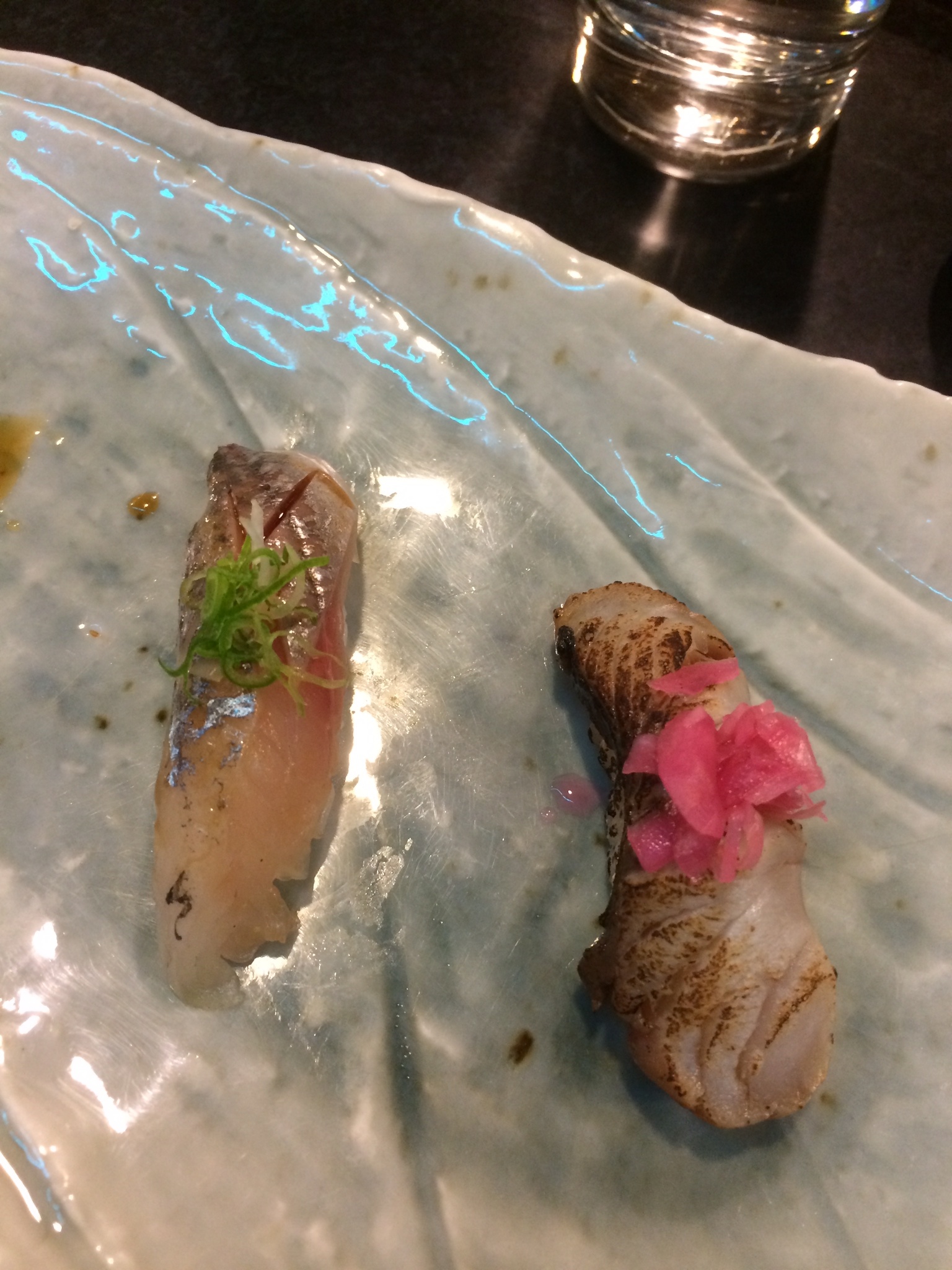 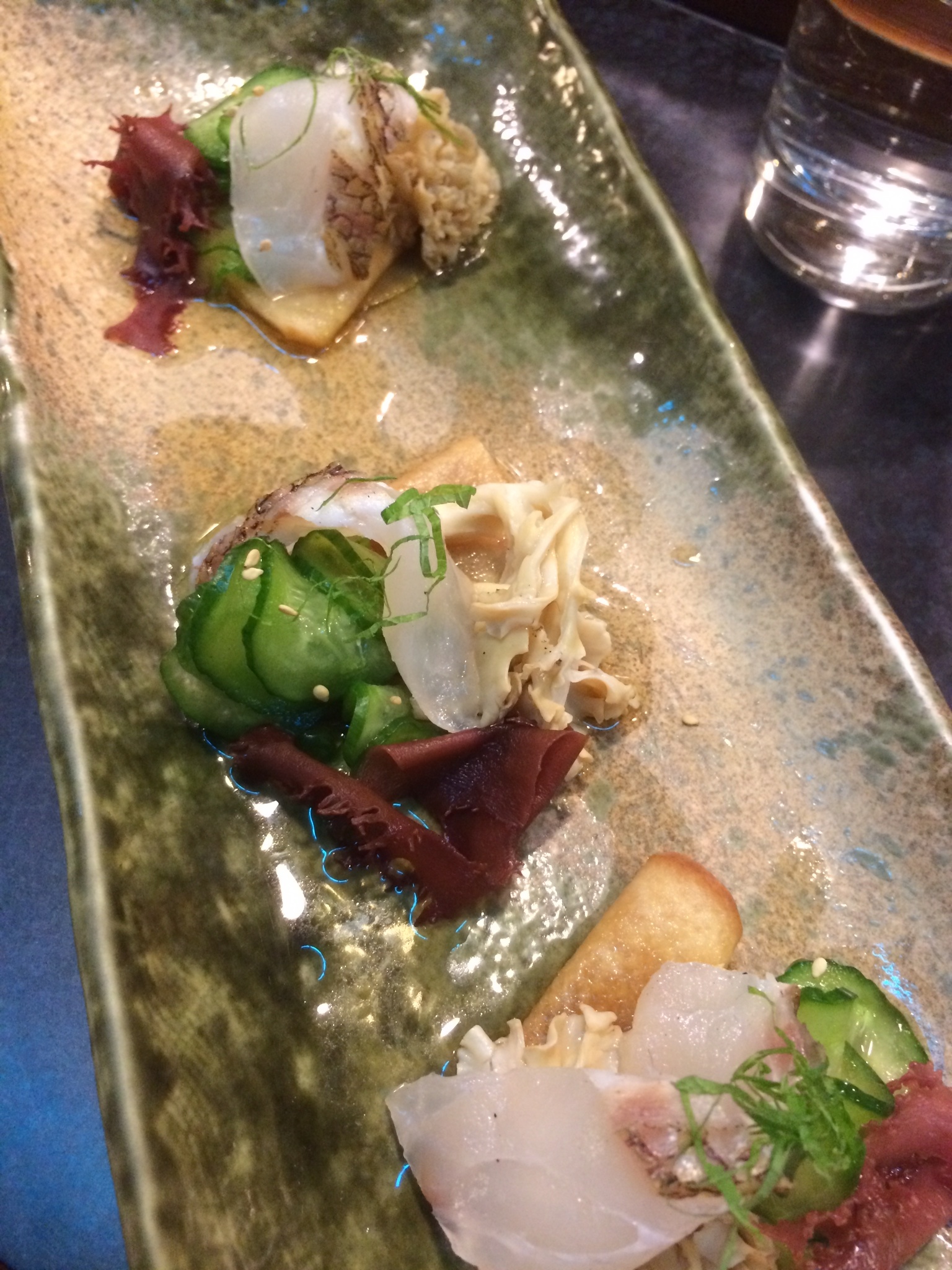 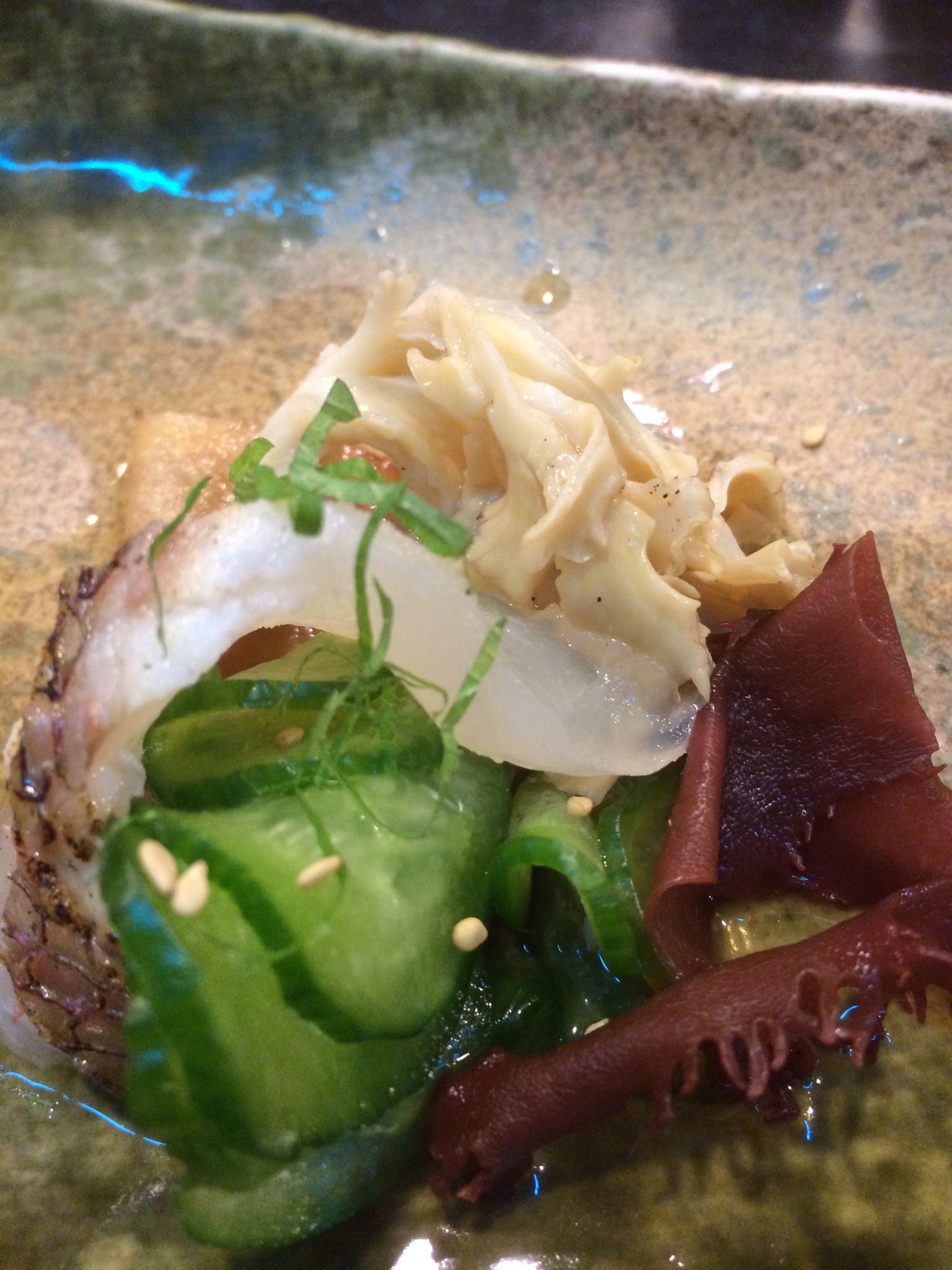 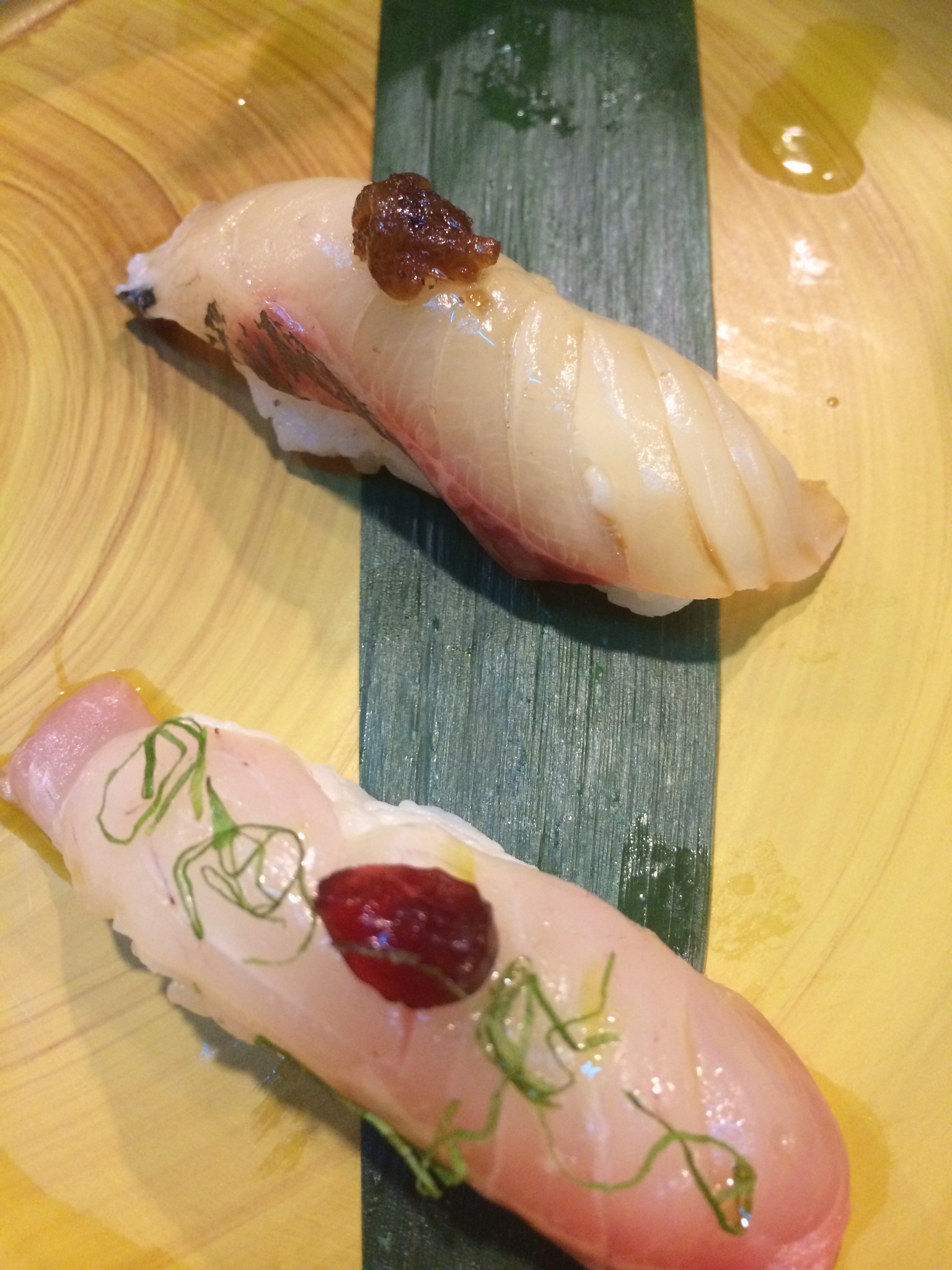 Beautiful! Thanks for posting.

I just made reservations for tonight on the strength of those pictures!

I’ve actually never been to Cafe Sushi. Will have to change that (I’m missing my omakase at Fuji in the Philly-NJ suburbs).

I don’t really remember it getting a lot of notice when I lived in Boston 5+ years ago (Oishii was the place, and of course new at the time O Ya). Has it really improved in that time? Is Omakase a recent thing there?

BBE, I think omakase at Cafe Sushi is a fairly recent (maybe 2 years) thing but other know better than I, I’m sure. As mentioned, several of us have had very different (not as happy) experiences with regular off-the-menu sushi here: omakase (and the chef’s specialty items) are clearly the way to go.

mirage, hope you have a wonderful time and take more pictures than I did!

We did have a wonderful time, but neglected to take pictures. I went with my daughter who told me she’d never had saki! So we indulged in the saki pairing with the omakase. Everything was terrific.

Those plates look absolutely thrilling. The pieces seem large though. Were they?

Gio, the nigiri were just the right size, not too big. The middle pics of the tsukemono (?) course we did need to eat the gorgeous piles of fish, seaweed, cucumber, mushroom and pickled nectarine slices in a few bites.

The son of the owner went to california for a few years, working at the acclaimed Sushi Ran in Sausalito, then came back to Cambridge and revitalized the program at Cafe Sushi (somewhat reminiscent of Strip T’s revitalization.) Now i wish he would come back to California! I ate regularly off the blackboard specials at Cafe Sushi ~ 3 years ago and always enjoyed them.

barleywino, you can’t have him back! It is amazing what they are doing there. And thanks for explaining, it does sound a lot like the Strip-T’s situation, and with equally delicious results.

i see Aki-san (from O Ya) is now at the Clio/ Uni sashimi bar. Have you been lately by any chance? Curious whether their preparations have changed (prices were always exorbitant unfortunately)

Was forced (ha!) to go again last night with an out of town friend. It seems I gave you all bad info about the pricing as last night our omakase was $75, not $90. And I was not drunk either time so cannot explain the discrepancy. In any event, it was just as divine last night although of course much of it was different. What was consistent across the two visits (besides the overall excellence) was that the first course was sashimi (first picture: barracuda with kuri squash puree, chanterelles, slivered scallion and fried shallots) and a middle course was tsumo nomo (not sure I got that right although I asked and he told me, it is Japanese for vinegar thing) which is the second picture – it has some vinegar and pickled things and seaweed and is intended to be a palate cleanser, and the last course was something really fatty and unctuous (last time, torched salmon belly, this time house-prepared anago, no pictures of either). Pigs that we both are, we wanted one more “dessert course” which turned out to be torched salmon belly and torched avocado in a sort of deconstructed nigiri format (last picture) - absolutely fabulous. The omakase sushi chefs are just a delight to talk to as well as making magic with the sushi. I took more pictures this time but missed 2 or 3 courses. 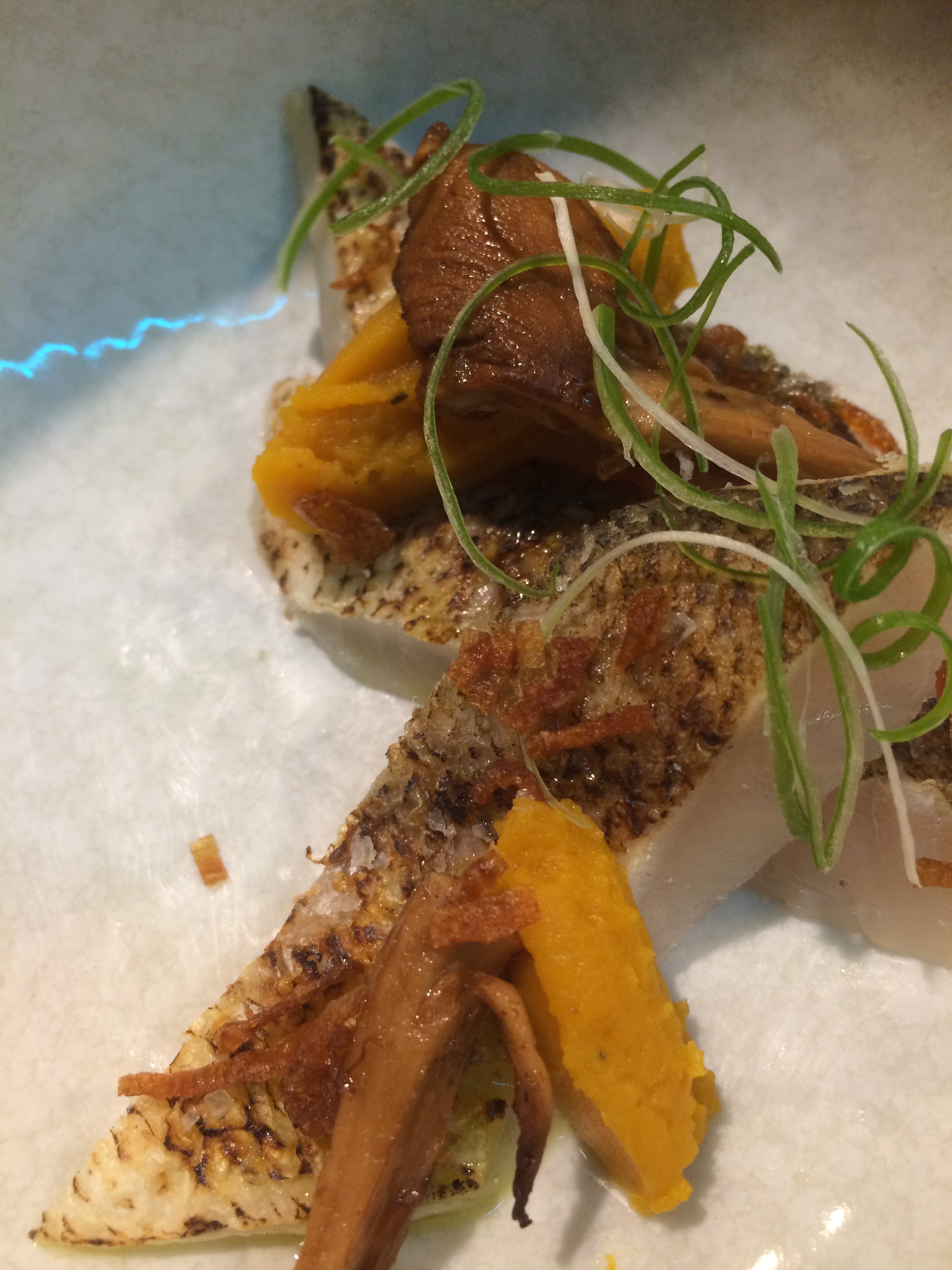 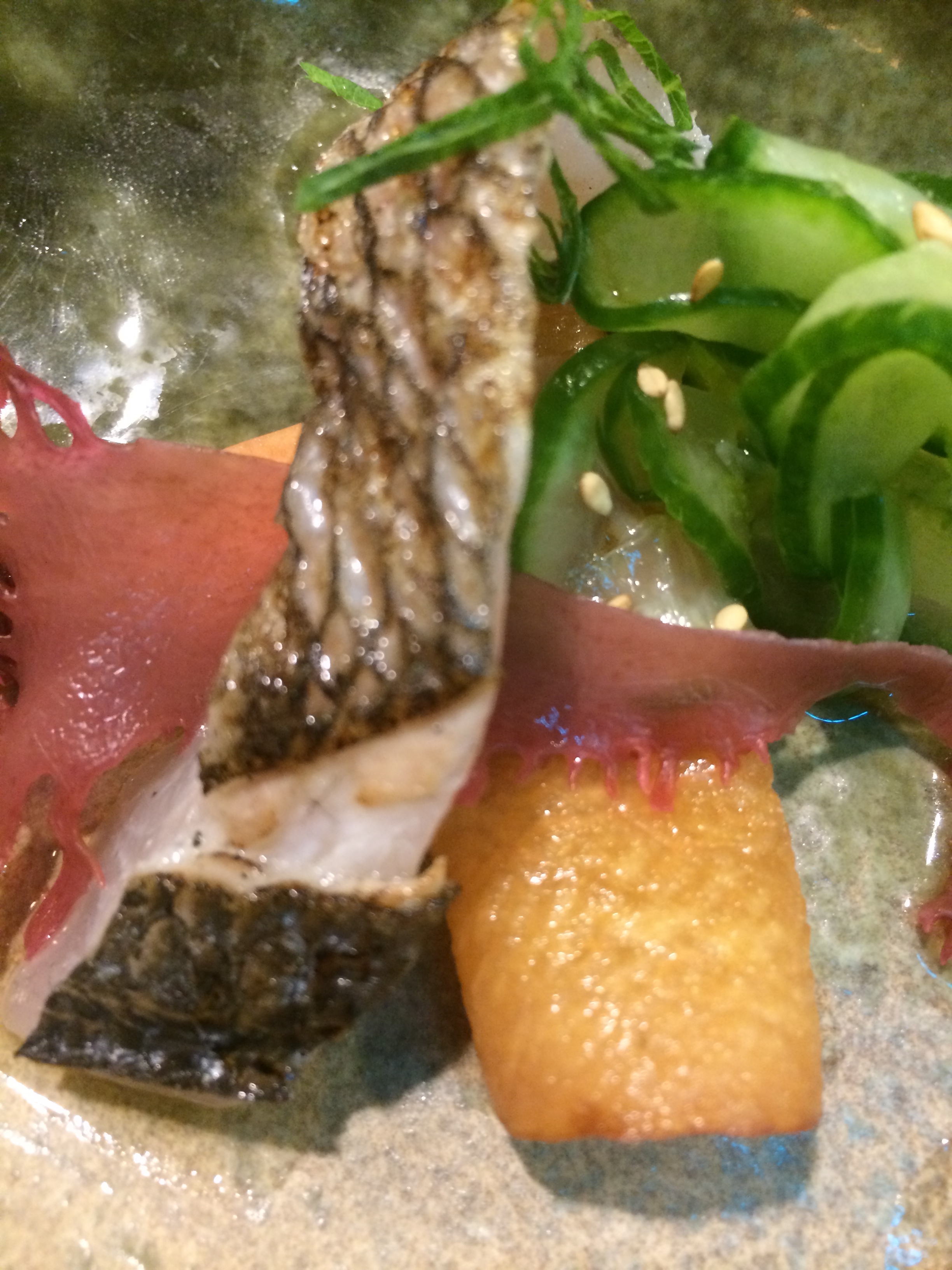 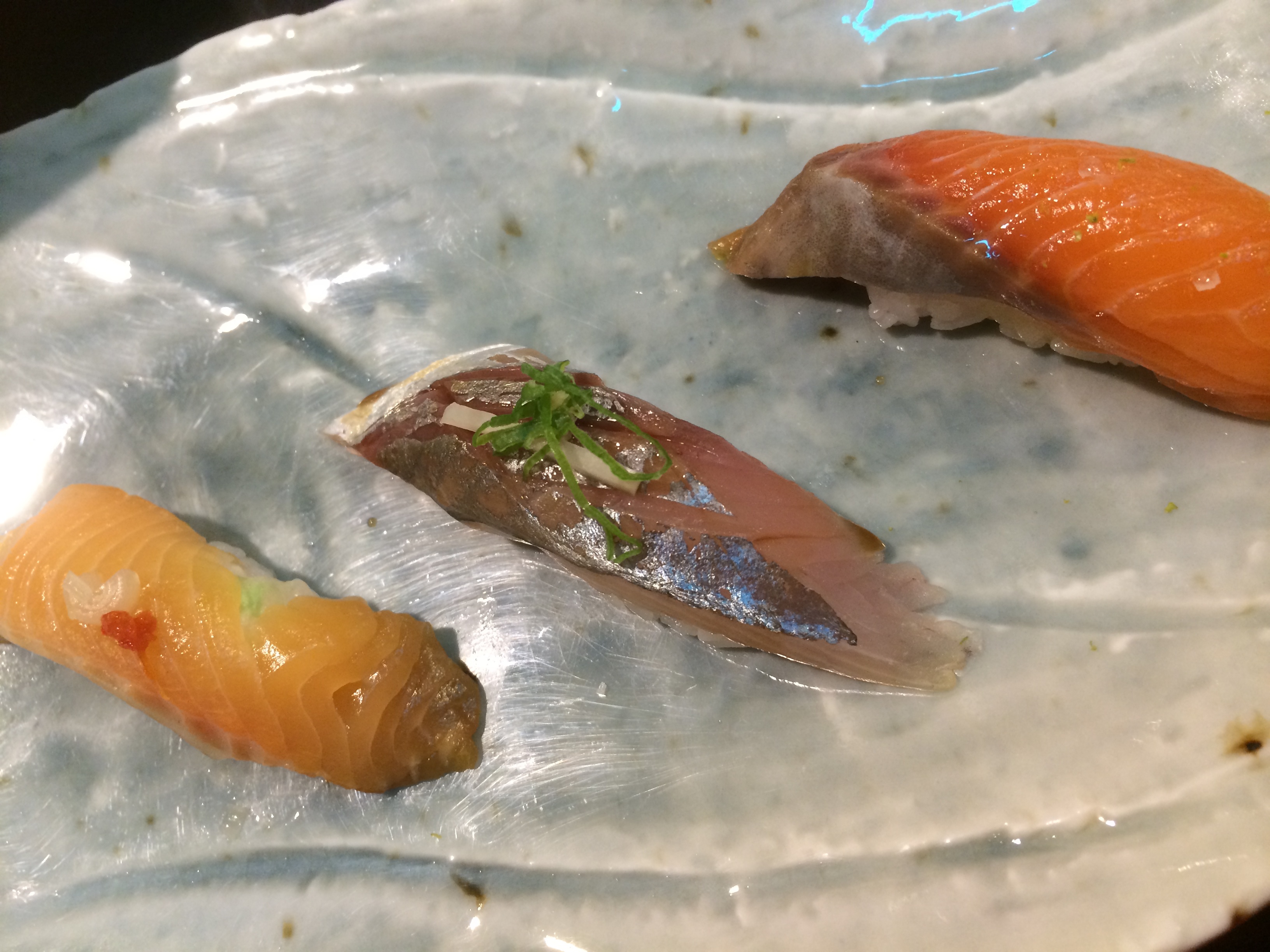 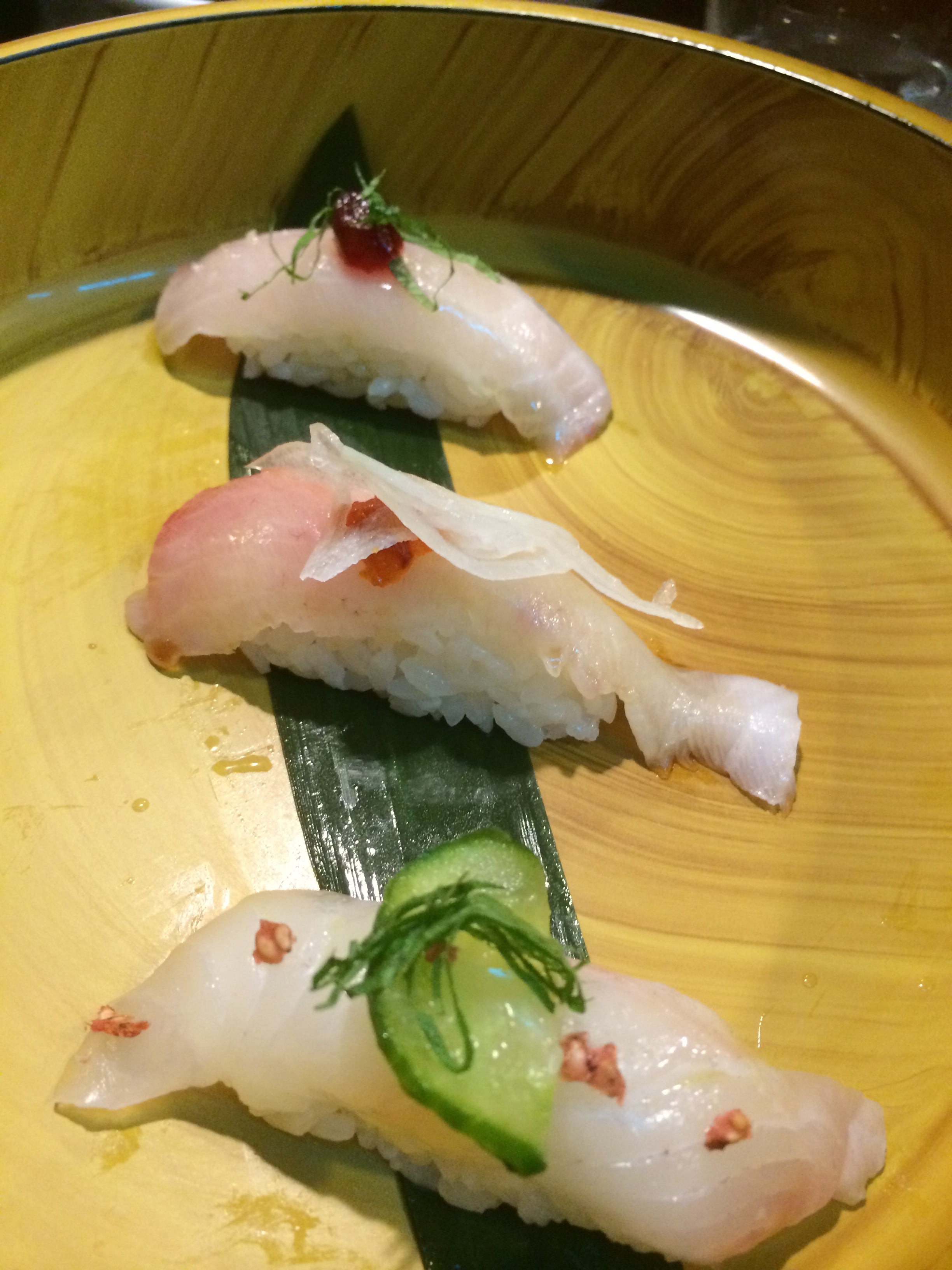 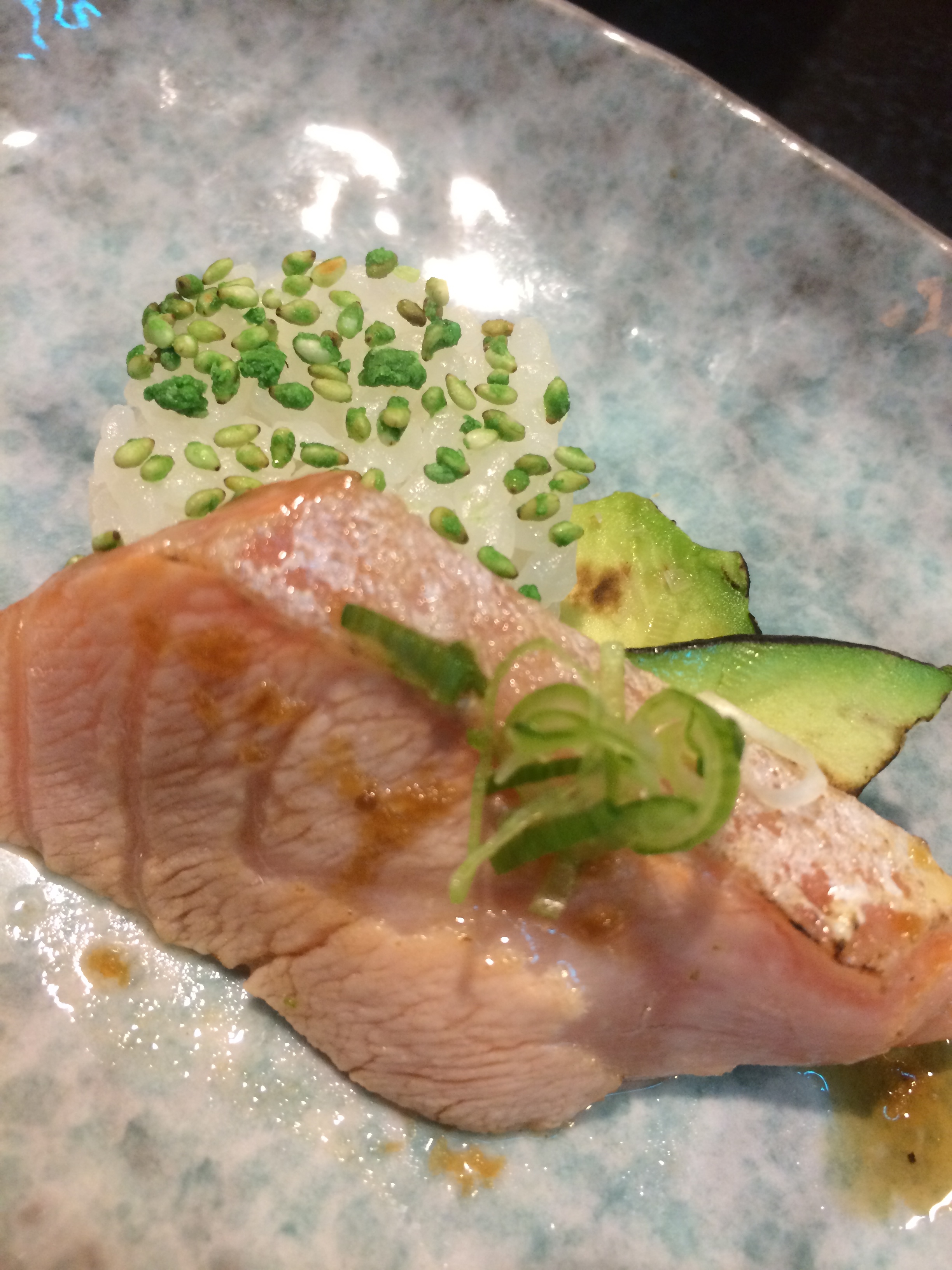 sounds like sunomono was your palate cleanser. maybe next time you can ask them whether they can add some karasumi or tatami iwashi…

Ah, thank you for the correct spelling! I tend to just let them decide and have not been disappointed yet. But maybe I need to indicate that I am adventurous, is that your implication? Not a bad idea I suppose. I am hampered by shellfish allergy sadly.

no implication intended, just to encourage the chefs to experiment with even more ingredients

is it possible the price varies from day-to-day depending on what is being served? either that or you are losing your mind.

Amazing pictures, Gretchen. Thanks for the reports.

I couldn’t agree more. Cafe Sushi is our favorite omakase in Boston. The price has crept up, but the quality and variety is there. They also have a sneaky well procured sake list. It;s been over a month, time to get back there…

Yet another fantastic omakase at Cafe Sushi this past weekend. The fish was fresh and varied with subtle preparations that allow the flavor of the fish to come through. However they have stepped up their game another notch with subtle but noticeable enhancements. They have switched to a new Japanese rice that is perfectly cooked and seasoned. For me while good fish is a given, perfect nigiri is arguably more dependent on the rice than the fish. Texture, flavor, consistency - it’s all there in this rice. Cafe Sushi has always been fantastic. Their nigiri is now approaching perfection. Another new dish featured beautiful house made tofu that was creamy, just a bit runny and delicious. Seizi and team continue to set the bar higher and higher.