I bet you did not know this place existed. The Ocean Alley Deli is the epitome of a hole-in-the-wall. I practically live down the street and passed the location hundreds of times. About a year ago, a sign went up in a tiny, nondescript strip of businesses on Palmer Avenue that read “Luncheonette”. However, every time I drove by, I couldn’t tell if they were actually open or not. Then, a couple of weeks ago, I decided to look it up online and found that they have a rather large menu consisting of the breakfast and lunch usuals but also Mexican food, both authentic and more Americanized. Pictures online looked delicious. Today, I got to see what the mystery was about.

There are only five or six tables inside. All but one was taken. The customers seemed to all be there on their lunch break. They also seemed to be a die-hard band of regulars, friendly with the family that owns and runs the place. We were greeted by all three people behind the counter—two cooking and one at the register. We took a look at the menu, and while I was in the mood for breakfast (a Montecristo was calling my name), my eyes wandered to the Mexican section. There were so many options to choose from that I stood there for probably 10 minutes. Just as I was about to get an order of soft tacos (either chorizo or lengua), the chef set down two freshly made taco bowls near the grill. It was at that moment, that Justin and I put down our menus and decided to order the same thing: the taco salad bowl with grilled chicken.

Should I have been more adventurous or cultural? Perhaps. But if you saw what these shells looked like (and see my pictures here), then you would probably understand. The shells were still warm, fresh out of the fryer. They were delicate, not greasy, and humongous. The bowls were then stuffed with lettuce, tomatoes, peppers, onions, pinto beans, roasted corn, and the chicken. It was topped with shredded cheese and we also asked if they could include some rice inside, which they did at no extra charge. There was also a side of sour cream.

Just look at that!

When they arrived at the table, our jaws dropped. These were indeed behemoths, so large that we probably could have shared one . I took my fork and crackled the bowl open. The freshness was apparent, as it chipped away rather than developing a fault line breaking it in pieces. The chicken was perfectly grilled and seasoned. There were plenty of all contents described—the roasting of the corn added even more flavor. The server also brought over two different salsas for us to use, spicy and verde. I had to stop eating halfway through simply because of how full I was. There was a lot of flavor and texture packed into this bowl. The price? $8.99

Justin was equally satisfied and impressed. I couldn’t believe how many times I passed this place by without realizing what would be contained inside. All of the employees (presumably the family that owns it) were so friendly and pleasant to deal with. I am going to give Ocean Alley Deli a 4 out of 5 stars. This is a place that should be more well-known in the area. As it stands right now, you have to know they are there, which is not easy—it would be difficult just to stumble on it. In talking to our server, she said they have been there for about a year. If you are looking for anything from chocolate chip pancakes or a turkey sub to some outrageously yummy Mexican food in the Hazlet/Holmdel/Middletown-area, this would be the destination. I’m so happy I live close by. I can’t wait to come back. I wish them the best of luck and continued success!

Sweet & kind review. Great food photos.
The Tables & Chairs remind me of every one of the “Work” cafeterias I ate in for 30 some years in the auto industry…

Glad to hear you found a hidden gem. I’d like to hear your review on the red store. I think you will like their food, if not love it.

Been back here two more times since. Had an excellent grilled chicken torta and these steak tacos. Everything remains incredibly fresh and the family is just so warm and welcoming. I talked with the owner briefly and he said that they are downsizing the breakfast and American menu because most people are ordering the Mexican food. No surprise there. Between here and Puebla Magico, we are very lucky in this area. 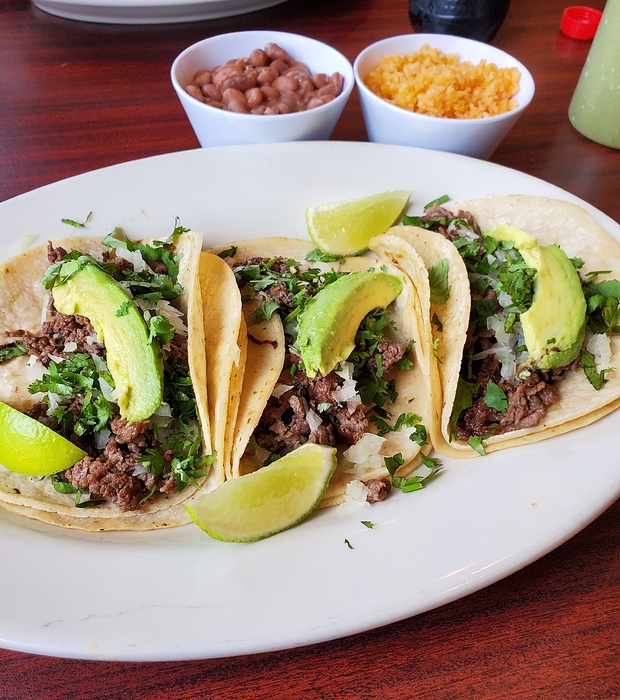 @joonjoon you should try this place ASAP.

Thanks for the tag! I have a weird love for local divey luncheonette places, unreasonably so when they also do Mexican. I think I saw this place and another one called Al’s on Yelp and have been meaning to check it out.

I kind of feel like I’d be cheating on Bradley Cafe but I’m a free man damnit! (which, btw if you haven’t been, you really must!)

Yes it is a pizza place but the manager is Guatamalan and they make tacos and other things…as well as bbq. The smoked kielbasa is pretty damn good!

Is this for fucking real? A pizza bbq Mexican place? Sign me up!

Two more excellent meals today. Now on first-name basis with the chef/owner. I told him we could taste the love in his cooking and he was very happy. 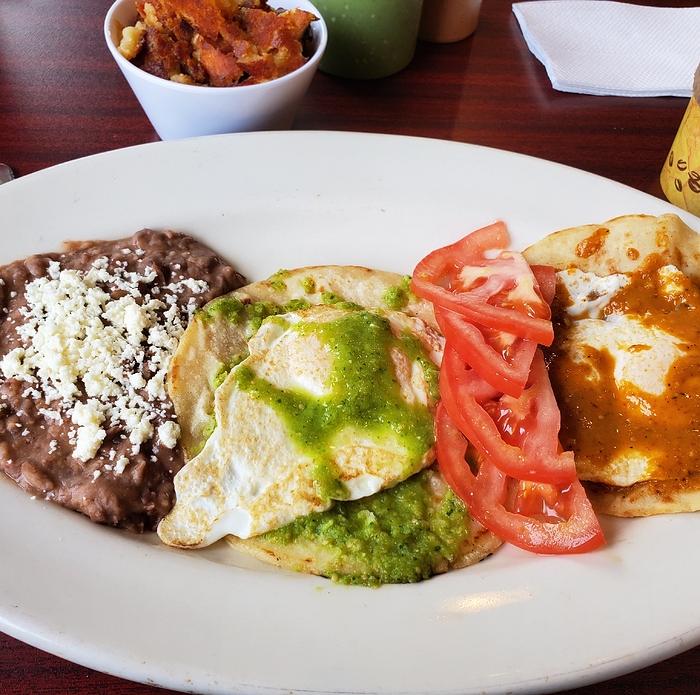 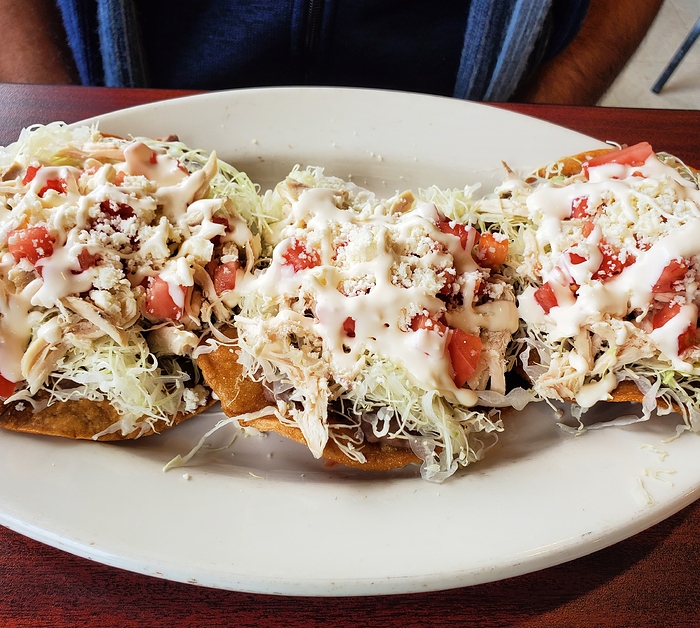 Takeout breakfast today after a windy walk down at an isolated Union Beach. Huevos Ranchos for me (with a sweat-inducing hot salsa) and a Belgian waffle for Justin. 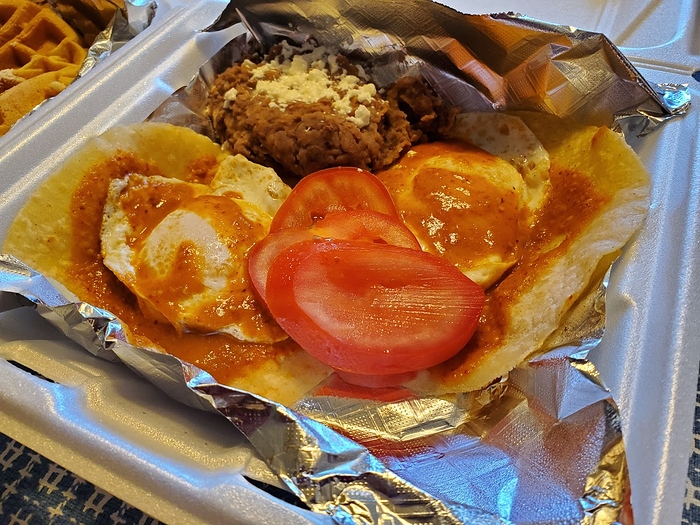 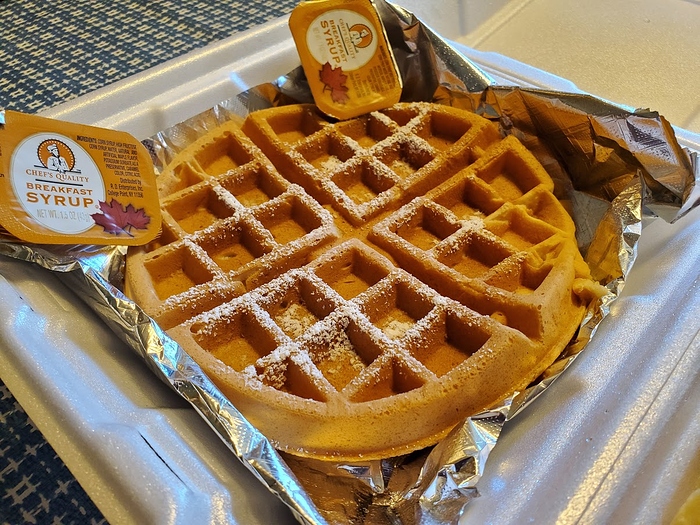 I asked the husband/wife team who owns the place how they are doing and she responded, “Not good, but we’re still here”. Still cranking out good food, though.