Cinnamon Tree, a dim sum and Cantonese restaurant situated in the iconic former Legendary Palace location at 708 Franklin at 7th Street, was completely dark as I walked by today around lunchtime. Yelp is reporting that it has closed after being in business there since about October, 2015.

Legendary Palace had occupied that spot for about fifty years until 2015 in a building described as “Chinese-style” which had originally opened around 1924.

There was also a tall building crane being operated directly across the street working on part of the Salvation Army Store on 7th Street.

Here is some history of the building located at the northeast corner of Franklin and 7th Streets: 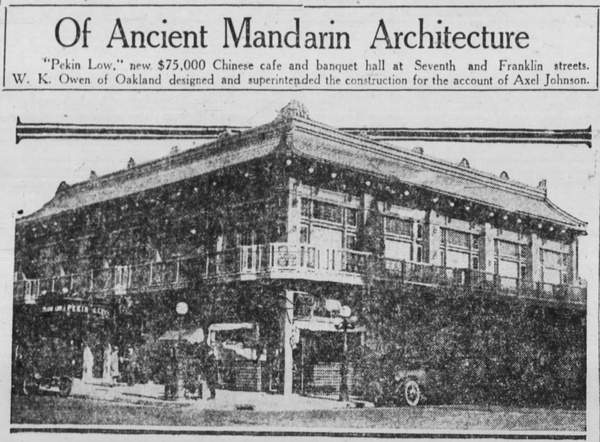 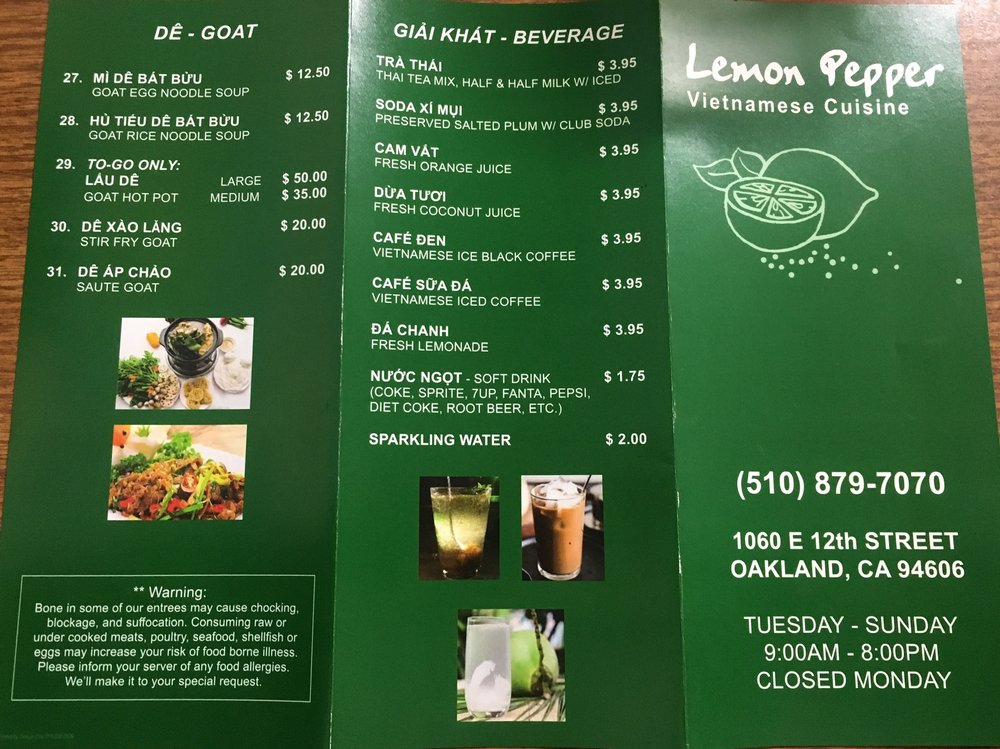 Cam Anh is now open at 920 Webster in Oakland Chinatown serving much the same menu as Cam Huang did at that location for decades. Prices for banh mi are about $4.50 each. 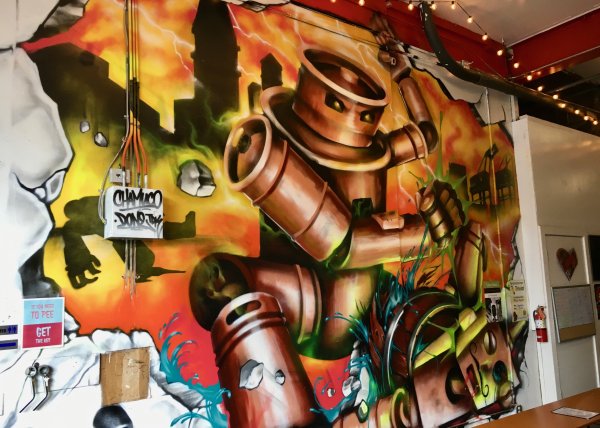 Oakland United Beerworks is the newest brewery to land in the Jack London Square neighborhood.

The opening of Oakland United Beerworks‘ new taproom at 262 Second St., near Jack London Square, at the end of March is great news for beer lovers. With four breweries in that area, the Beerworks has teamed up with Federation Brewing, Independent Brewing and Original Pattern Brewing to create the Jack London Brewing District. Soon you’ll be able to pick up a district beer map at any of the breweries, as well as at the Visit Oakland offices in Jack London Square.

There’s a cider bar in the area, too: Crooked City Cider Taphouse at 222 Broadway, with a taps lineup that includes their own cider, along with other local ciders and craft beers. 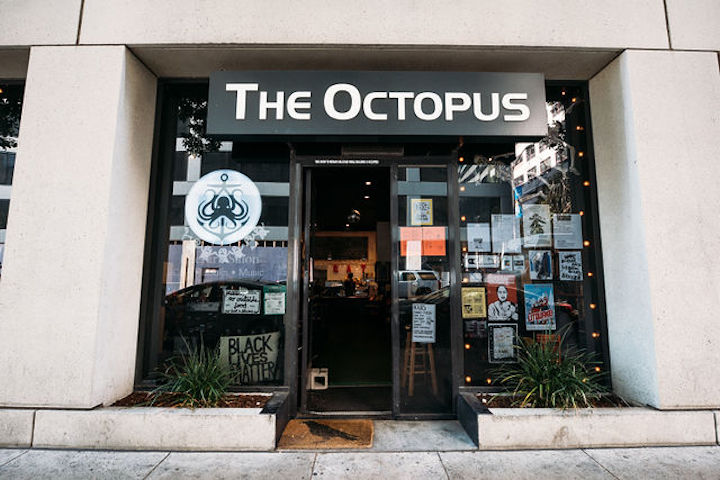 The Octopus Literary Salon offers comfort food and a hub for book lovers and...

The Downtown Oakland café, bookstore and venue has earned a loyal following for its kale Caesar and its weekly schedule of diverse events, but the owners need help paying off a hefty construction loan. 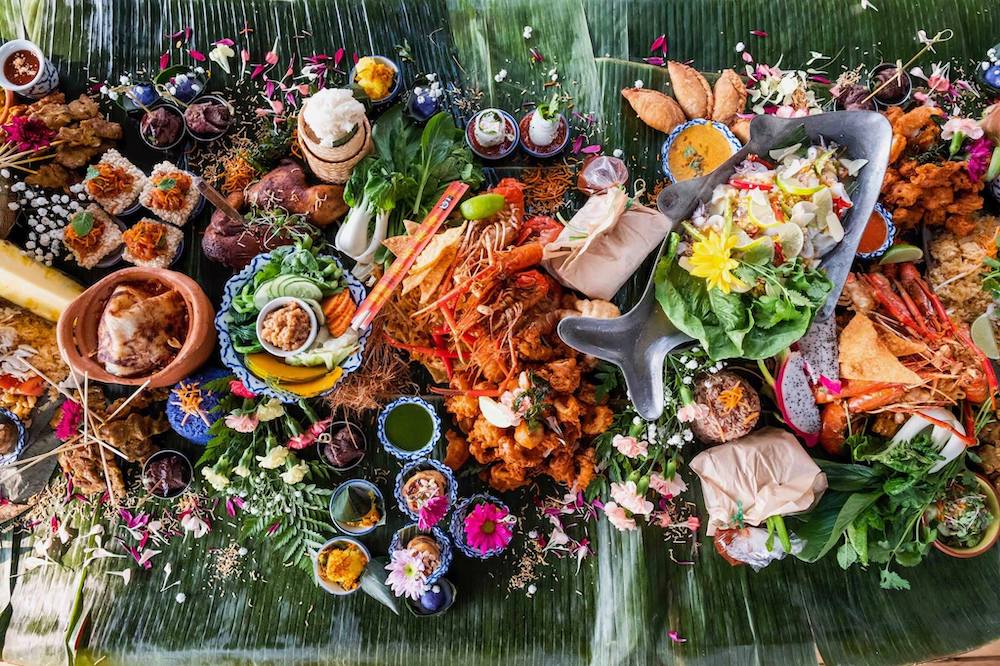 The Jack London Square restaurant teams up with dozens of Bay Area restaurants, vendors, and artisans for the Thai, Lao, Myanmar and Cambodian New Year festivities; plus, Songkran at the Berkeley Thai Temple.

Songkran will be celebrated at Jack London Square for the first time, with an all-day event happening 9:30 a.m. to 5 p.m., Saturday, April 27, in front of Farmhouse Kitchen Thai Cuisine [ 336 Water St
Oakland, CA].

…
Although the event is free, those seeking a special Songkran experience should RSVP in advance for a seat at the VIP Lao Table. Farmhouse Kitchen will set up a long communal table topped with tempting Thai and Lao fare served family-style and eaten with hands.

…
and a som tum dancing competition, where people make the traditional spicy green papaya salad and dance at the same time. 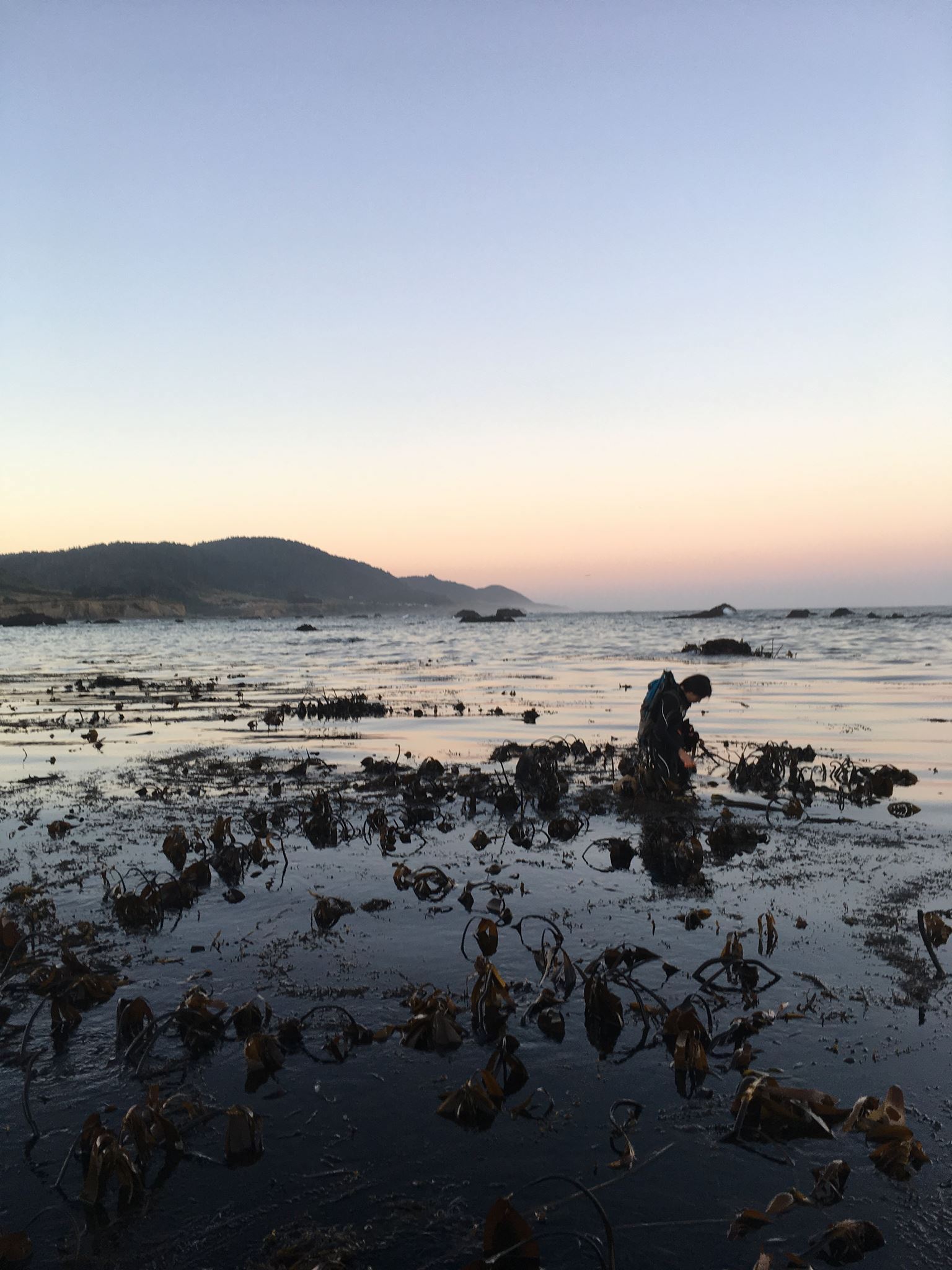 The three women of Salt Point Seaweed hand-gather their products off the Mendocino coast, but are piloting research on the environmental benefits of sustainable seaweed farms.

Way back in 1934, an enterprising, young Armenian-American street hot dog vendor in Chicago named Kasper Castigian, like a lot of people at the time, heeded the call to “go West, young man.” And so he did, bringing his own special brand of hot dogs to the fertile streets of Oakland. Business boomed, and soon his cousins showed up and followed suit. Before long, brick-and-mortar stores named Kasper’s began to spring, and an East Bay hot dog empire was born. 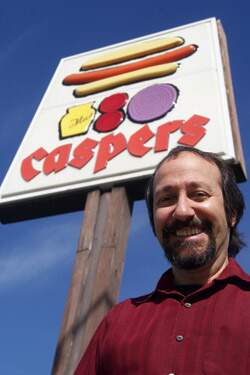 PK: I can understand why it’s difficult for you to comment. I can’t even remember the last time I put ketchup on a hot dog. And in Chicago, it’s sacrilegious to request ketchup on your hot dog.

PR: Yeah, I mean we didn’t offer ketchup until probably the '60s or '70s because the concept is that’s what the tomatoes are for. What do you need tomato paste, basically, on your hot dog when you have fresh tomatoes? That was probably one of the first things that got added after the four main ingredients. I imagine that was the first like, ‘Oh, all right. We’ll put ketchup in the stores.’ And then it went to cheese, and I will say that we still grate our own cheese in-house.

BORN ON THE BAYOU Oakland’s White Horse Liquors is now home to Krispy Krunchy Chicken, a Louisiana-based fried chicken chain known for opening franchise locations within convenience stores. Opening a restaurant inside a liquor store or bodega might be a novelty for us in the West Coast, but it’s commonplace to find some of the best eats (like boudin and po’boys) at gas stations and convenience stores in Lafayette, Lousiana, where Krispy Krunchy got its start in 1989. 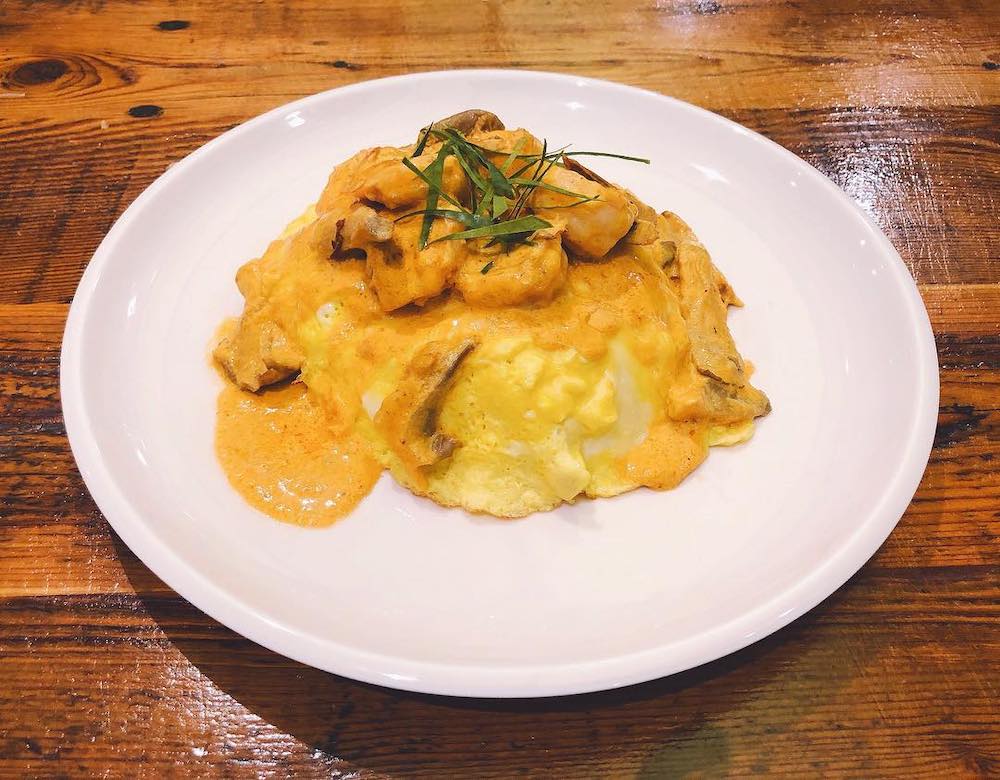 They must be making a push around here. M & B Market at 6310 Market St, Emeryville also has a Krispy Krunchy Chicken Sign up. 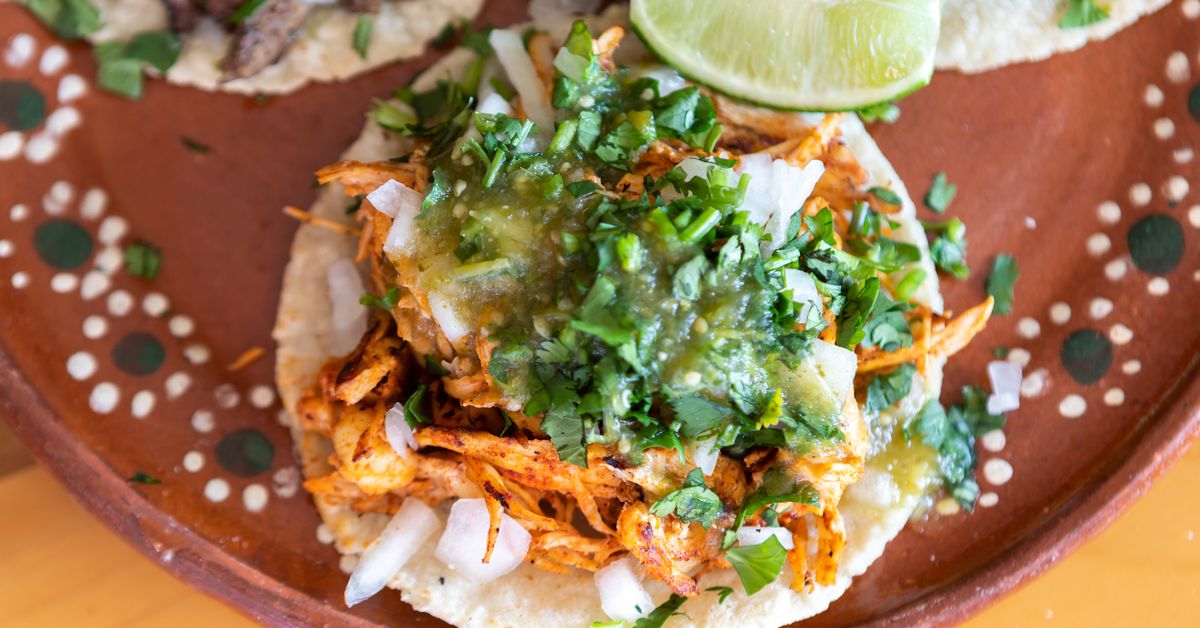 The Oakland Restaurant Giving Zacatecan Immigrants a Taste of Their Home

Look closer, though, and you’ll see that the list of stews for gorditas and meats for tacos aren’t just your run-of-the-mill carnitas or carne asada. There’s chicharrón en salsa roja, a braised pork skin preparation that Chairez says is a typical gordita filling in Zacatecas. There’s a stew of pork and nopales that is a specialty of her hometown of Valparaíso. On weekends, there’s tender beef barbacoa done as a guisado (stew), a triumph of slow-cooking that Chairez serves with enormous handmade tortillas, each one big enough to feed a family of four. And for Lent, she started offering a Zacatecan-style chiles relleno, served with a side of stewed nopales, and gorditas filled with scrambled eggs stained red with dried chiles—a traditional Valparaíso breakfast dish. Everything tastes even better with a squirt of the restaurant’s smoky chile de árbol salsa. 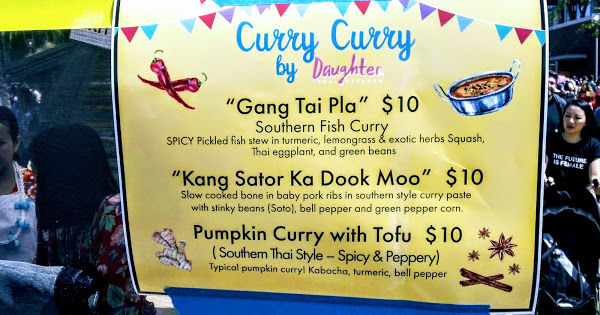 same photos but in a slideshow with special effects and music soundtrack, about 2:40 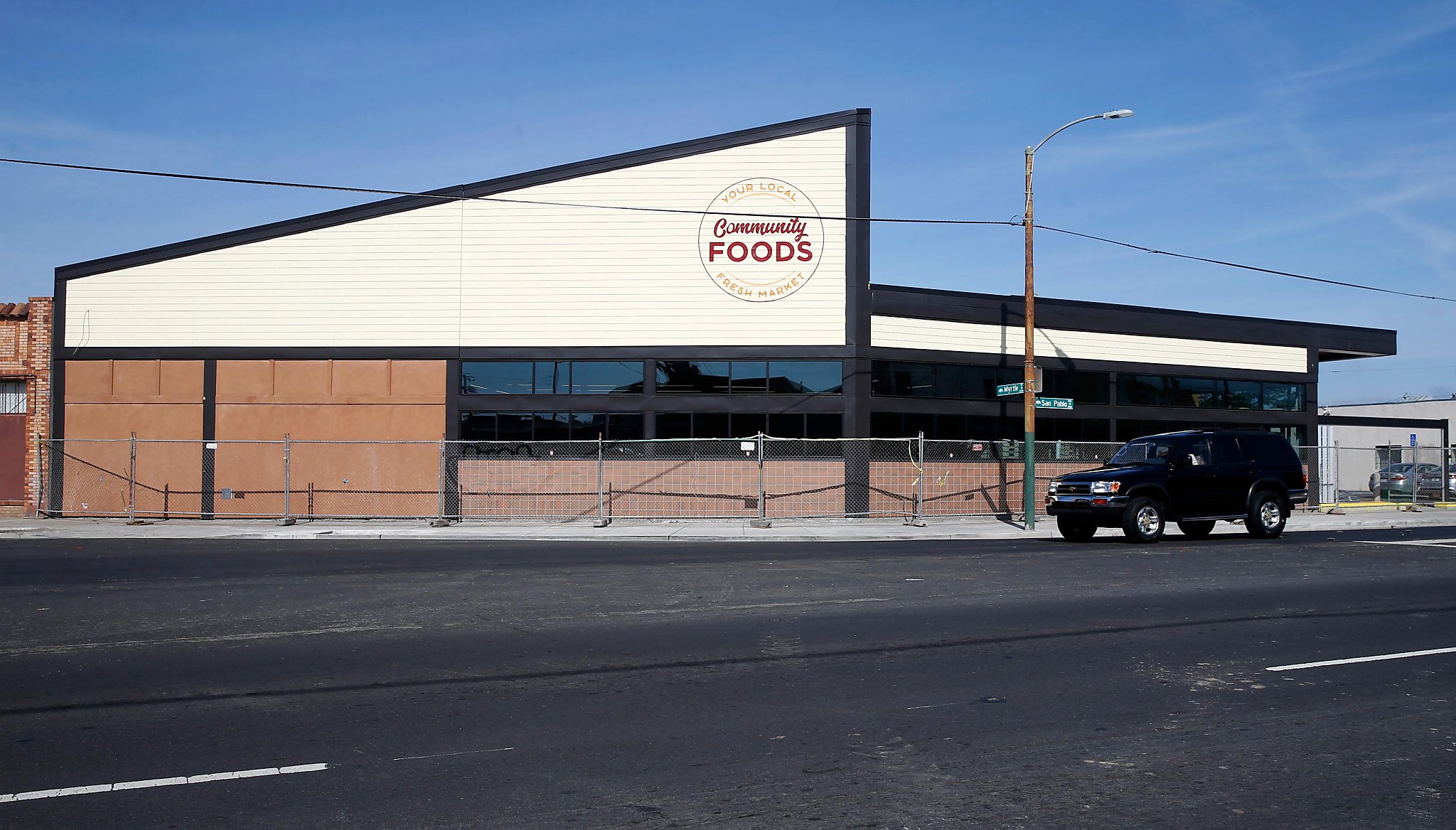 After years of delays, Community Foods Market is almost ready to open with fresh produce and a cafe for West Oakland, a neighborhood that’s long been considered a food desert.

To handle the produce, Ahmadi brought on Bill Fujimoto, who worked as a manager at Berkeley’s Monterey Market for roughly 30 years. Because of the way Community Foods Market was funded, plus its relatively small size and its social enterprise ethos, it can keep prices low. A bunch of kale, for example, will cost $1.49 for organic and 99 cents for conventional — about half the price of many local stores.

On the mezzanine, nonprofits will provide free services to customers: Cooking Matters will offer cooking classes and store tours, while LifeLong Medical Care is expected to do health screenings and consultations.

Community Foods Market
(due to open in early May)
3105 San Pablo Ave.
Oakland 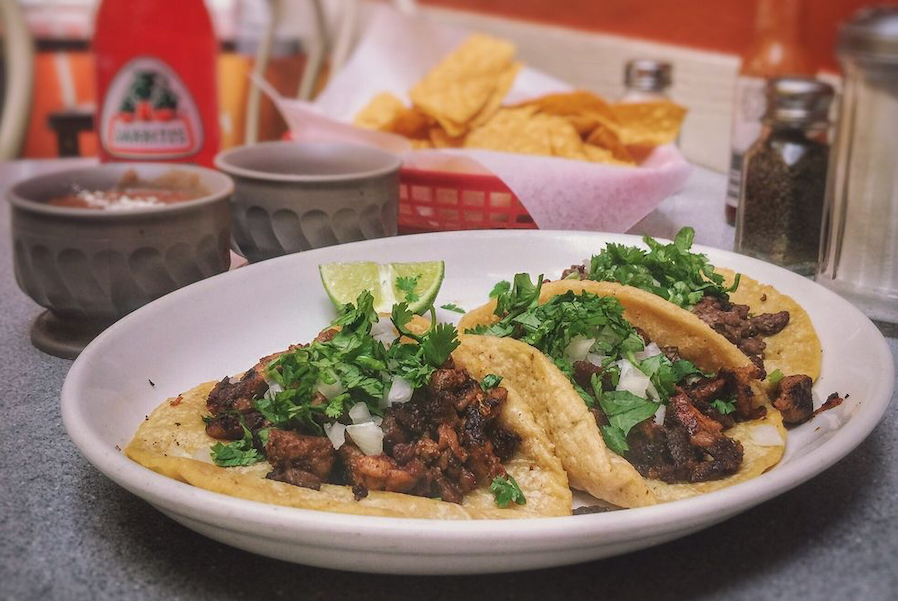 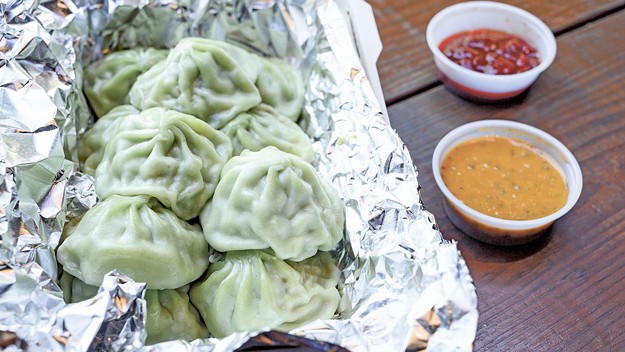 The veggie momos came in a green wrapper, making it easy to tell the difference between the two varieties. I loved the filling, which consisted of paneer, cabbage, onion, and cilantro. The paneer lent the momos a creamy, savory taste, which helped tie together the flavors of the crunchy vegetables. A touch of ginger and garlic added comforting, warm notes. Though these momos, too, had a tendency to fall apart, I’d gladly get them again — and would choose them over their chicken counterparts. 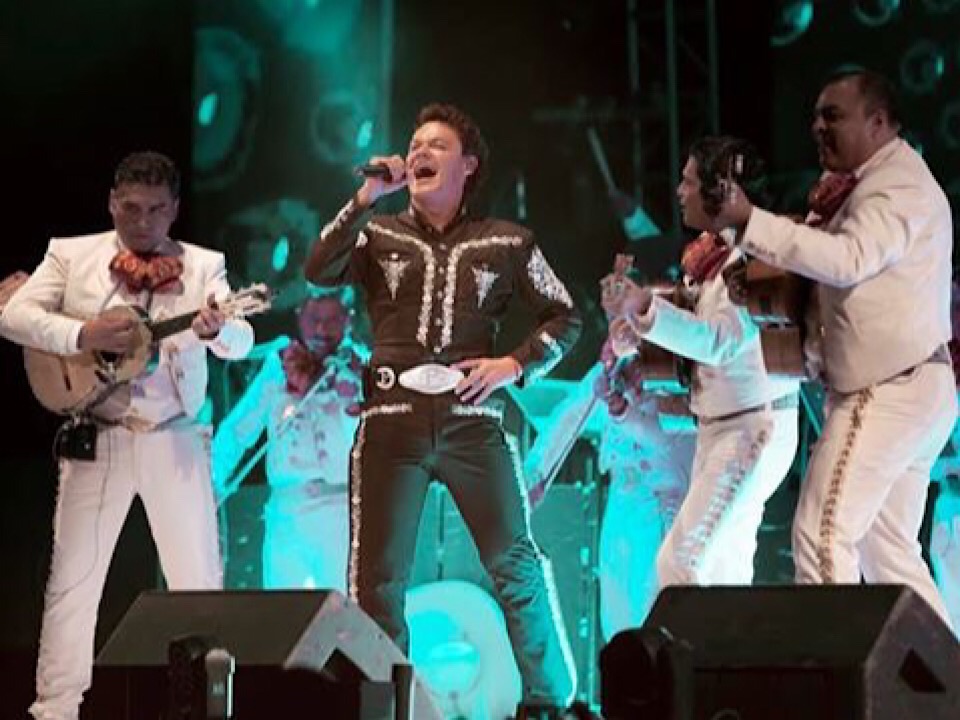 Attend a cultural food festival, or catch some laughs at a massive rotating comedy show in Oakland this weekend.

Celebrate the cuisine and culture of Armenia at this special event, which features everything from kebabs to stuffed grape leaves to vegetarian fare, along with Armenian coffee and desserts. The event will also feature local vendors, games for kids, and live music and dancing. Catch a free shuttle to the festivities from the from Oakland High School and Trinity Lutheran Church parking lots.

“The Diet of The Chinese Railroad Builders”

Learn about the culinary findings of the early Chinese pioneers who built the Transcontinental railroad and the birth of present day Chinese American culture. Chef David SooHoo was born in San Francisco to Cantonese immigrants who owned Chinese-American restaurants in Sacramento. With more than 50 years behind the wok, SooHoo was the first chef from Sacramento invited to the Beard House, and most recent personal chef to Barron Hilton at his Venice Island Duck Club located in the reclaimed swampland of the San Joaquin Delta by the Chinese after the gold rush.

What kind of food did they eat?

The workers insisted on eating Chinese food: rice, dried vegetables, dried oysters, dried abalone fish, and some pork and poultry. Much of these foodstuffs came from California sources, such as fresh vegetables. They also drank tea and hot water, and occasionally they drank wine; they also smoked opium. The Irish or white workers were fed mainly meat and potatoes along with whiskey. The Chinese diet and especially the use of boiled water reduced the outbreak of dysentery and other diseases. In order to provide food for the workers, a network of growers, and local Chinese importers established a trans-Pacific supply chain. Food included rice, preserved meats; dried fish, shrimp, and other shellfish; dried legumes; dried noodles, preserved vegetables, dried seaweeds, and teas. Evidence at work sites indicated that the workers ate far more meat – such as chicken and pork deer, along with bear and other game – than they would have back home. The Central Pacific made an arrangement with one of the labor contractors, Sisson, Wallace & Company, who had exclusive right to sell food and other supplies to the Chinese workers. As the work moved through Nevada, the Central Pacific had two train cars labeled “China Store,” from which goods could be purchased. Because the demand for tea was so high, the contractor decided to bypass the middlemen and had their agents in their Hong Kong office purchase the tea directly from growers in China. Food was so important that the Chinese cooks were paid more than unskilled workers. A Chinese physician often accompanied labor teams.