Since this year we got the membership to the Children’s Fairyland, we are showing up in Oakland and the area around Lake Merritt more often. After a recent trip, we grabbed a small meal at Moroccan Palace Restaurant, recommended by Janelle Bitker.

We had a lamb/ vegetable cous cous and the chicken basteeya. The cous cous was light and fluffy, with chunks of tender lamb. It was seasoned with restrained hands and the distinctive combination of mellow and harmonic spicing mildly permeating from each bite. Pretty good.

The ~5" basteeya had powdered sugar sprinkled on top. It was well made, crispy phyllo dough outside and chicken seasoned with the Moroccan spices and almond mixture inside. We quite enjoyed it. Its a good combination of savory, sweet and aromatic. Minor quibble would be that its on the sweeter side, and if they used the darker chicken meat instead of breast meat it would be more moist. Not quite the level of Lahlou’s basteeya from my memory of a meal at Aziza years ago, but one of the better ones around here.

House bread rolls with olive spread was pretty good too. Mopped up all the spread.

Owner was from Casablanca. Only got a picture of the basteeya: 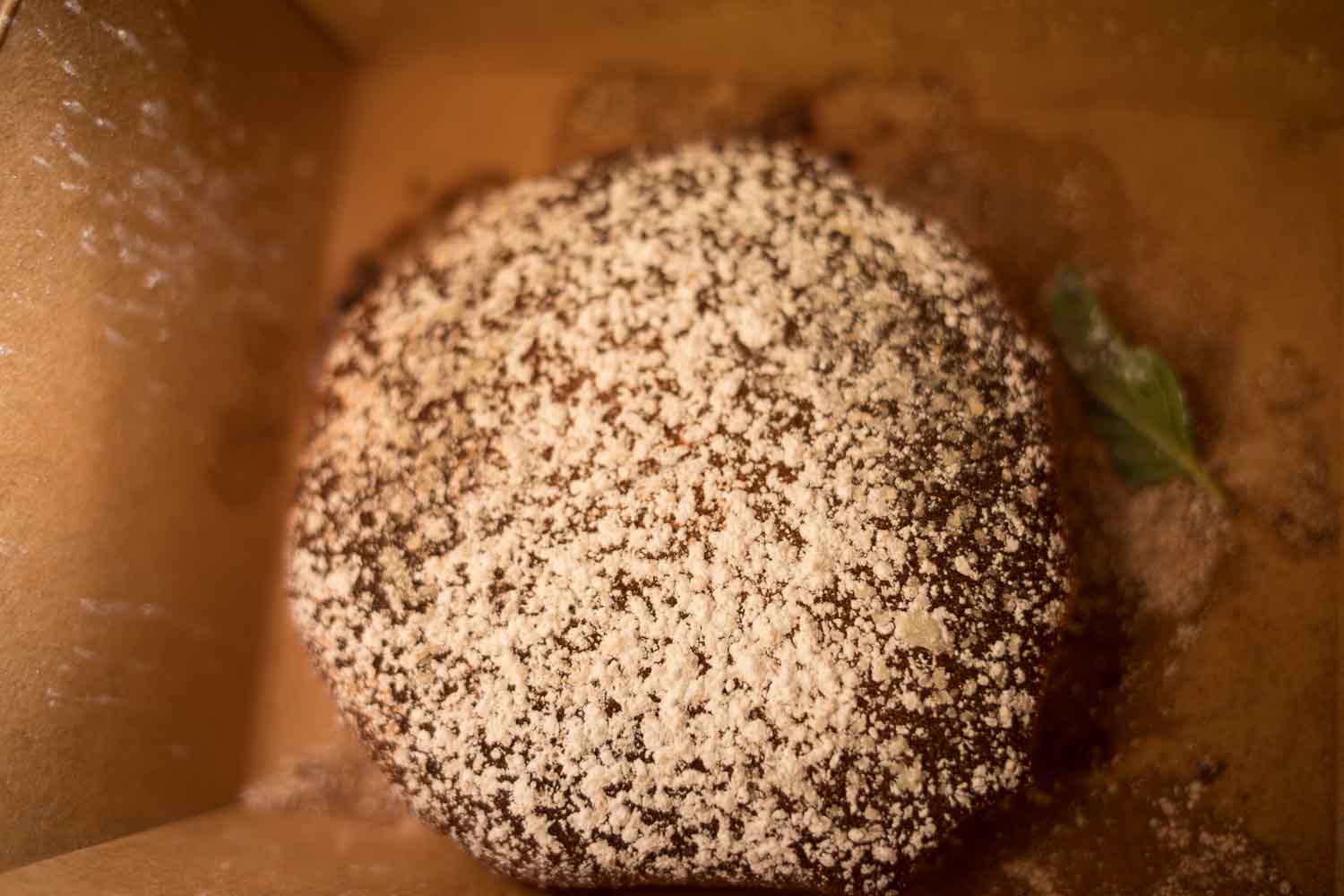 What else is recommended here? I think I need to head back some time to try more of their stuff. We’ve been looking for good Moroccan food here since travelling there years ago. We still haven’t been to Mourad (I wanted to try the family meal but a little hesitant about the prices). Aziza has closed. I haven’t been to many around here but the spicing usually here was pretty ‘crude’ and ‘harsh’ versus the harmonic combination usually found in Morocco, or seemingly at Moroccan Palace for at least the cous cous.

Funny thing is when we traveled all over Morocco including the desert, by necessity we had to eat tajine and cous cous pretty much every meal. We were pretty sick of this stuff by the end of the trip. But now we are not there any more we found that its really not easy to find good ones around the Bay Area. So any recommendations or dis-recommendations will be much appreciated.

We loved Aziza (and have visited throughout its various menu changes), but Mourad not so much. Mourad is like Taj: Californian with a tiny bit of ethnic accent. That said, the chicken with olives looked good at Mourad, better than the lamb we had which was simply dull and uninteresting. Shockingly, we did not like the brown butter couscous although at Aziza it was always a ‘must have’.

We have dined at eight different Moroccan restaurants since the very first one, Marrakech, opened in SF back in the late 1970’s. Aziza and El Mansour saw multiple visits from us over the years. The best traditional Moroccan was the long-gone Mamounia/SF, on Broadway.

Moroccan Palace does a nice job but a limited menu. Very heavy food (apparently nobody has learned anything from Aziza’s/Mourad Lahlou’s example). 99.9% of Moroccan restaurant menus are exactly the same today as when we first read the menu at Marrakech fifty years ago.

Dropped are such stand-bys as the honeyed chicken or (my favorite) lamb with almonds and olives. Fish is available only on Fridays, as a special. Oddly, there is no starch served with the tagines. Several are available: bread, couscous, or French fries(!). They may be extra cost; we didn’t ask.

Zaalook salad: Roasted eggplant purée with a tangy flavor. Served with warm bread rolls which are good but not quite identical in texture to the traditional breads, khobz. The salad was good, but it tired the palate after a while. There’s an excess of red bell peppers in it, making it rather unbalanced in flavor.

Royal Couscous: One of the more, ahem…interesting presentations of the traditional “Couscous Royale” banquet dish. Its appearance is impressive, although the merguez standing up straight, speared on a skewer on top of the constructed couscous, makes a rather…well, pointed statement (see the Yelp photo: https://www.yelp.com/moroccan-palace-restaurant)! This is the Moroccan version of an Indian biryani. Not very exciting in flavor. The steaming of the couscous keeps the meat edible; there’s a large cube of lamb, one of beef, and an entire chicken quarter (leg and thigh). We love merguez sausage but it’s only available here in two dishes, the Royal Couscous and the Mixed Kebabs. Next time I’d ask if they have any harissa sauce. The couscous was rather moist from the thick slices of zucchini around the rim, as well as a heap of sliced cabbage and carrots. Both are well cooked, as are the meats. Spouse likes his couscous moist, however, so this was fine with him. For purists, the couscous in this barely escapes being soggy.

Lamb shank braised with prunes and honey: On top of the shank, there’s a generous draping of finely sliced, caramelized sweet onions and raisins. This dish requires the gaminess of lamb meat and a rich au jus to offset the sweet ingredients, else it becomes cloying. MP’s version has the right balance – perhaps a little more shaded to the sweet side than I would prefer, but Spouse enjoyed it very much.

Bastilla: A good quantity of shredded chicken, with sautéed onions and a small amount of chopped almonds. There was no scrambled egg mixed in that we could see or taste, so minus marks to MP on that omission. The filo was three or four layers thick, which is sufficient to give the needed crisp textural contrast to the filling. This was heavily sprinkled with powdered sugar and Vietnamese cassia on top. Traditionally the squab filling is also flavored with sweet spices, but doing so is best reserved for using true, or Ceylon, cinnamon. Cassia is too hot and aggressive to be used in the filling as well as on top, so it was a good decision to be restrained with it. Spouse enjoyed MP’s version. We have gotten some truly mediocre versions of bastilla over the last few years and it always been one of his favorites. Despite the lack of scrambled egg and minimal chopped almonds, we would order this again. It is not the equal of Cafe Zitouna/SF, however. Aziza’s duck bastilla was getting skimpier ever year; we did not try it at Mourad.

Dessert: Sampler Platter. This is the only dessert. It’s laudable that they don’t want to do the “same-old, same-old” baklava, but surely something light and interesting could be accomplished with CA fruit and filo pastry. The sampler holds three little pastries, and the overall effect is too dry/hard. One is cornelles de gazelle, a crescent-shaped pastry with an almond paste filling that wasn’t very sweet, flavored with orange water. The dough is thick and as hard as a rock. A second is almond briwat, almost identical to the first but instead of being baked, the thinner warqa dough, similar to filo, is wrapped into a fat triangle; deep-fried, then glazed with honey and sesame seeds. The third was the special, a soft, crumbly cookie flavored with rosewater. Spouse didn’t like any of them. I thought the rosewater cookie was the best and with a hot tea this last cookie was a decent ending.

We didn’t have high expectations for Moroccan Palace, but we were very pleased overall. We would definitely return for the bastilla and the lamb, and look forward to trying a few more items on the menu.

However, we’re not sure Oaklanders are ready to support this fine little restaurant. It has taken decades for the Ethiopian restaurants to be accepted, and there is no denying the traditional Moroccan restaurant menu is frankly on the heavy side. This is unfortunate; true Moroccan cuisine offers a wide variety of salads, both green and fruit, as part of the everyday meal. But you’d never know that from the standard Bay Area restaurant menus.

The other issue is price. This is not a bargain cuisine; there is a cost not only for the meat-heavy dishes but the labor-intensive recipes. El Mansour wisely offers its diners the alternative of an attractive five course prix fixe, and this is something Moroccan Palace should seriously consider doing.

(Note: I haven’t gotten around to posting this to Yelp yet; I tend to be several months behind. We visited Moroccan Palace September 2017)

Royal Couscous: One of the more, ahem…interesting presentations of the traditional “Couscous Royale” banquet dish. Its appearance is impressive, although the merguez standing up straight, speared on a skewer on top of the constructed couscous, makes a rather…well, pointed statement

An alternative interpretation of the presentation of the royal cous cous is that it just may be a middle finger to Morocco’s neighbor and bickering partner, Algeria (note: I personally have nothing against Algeria): 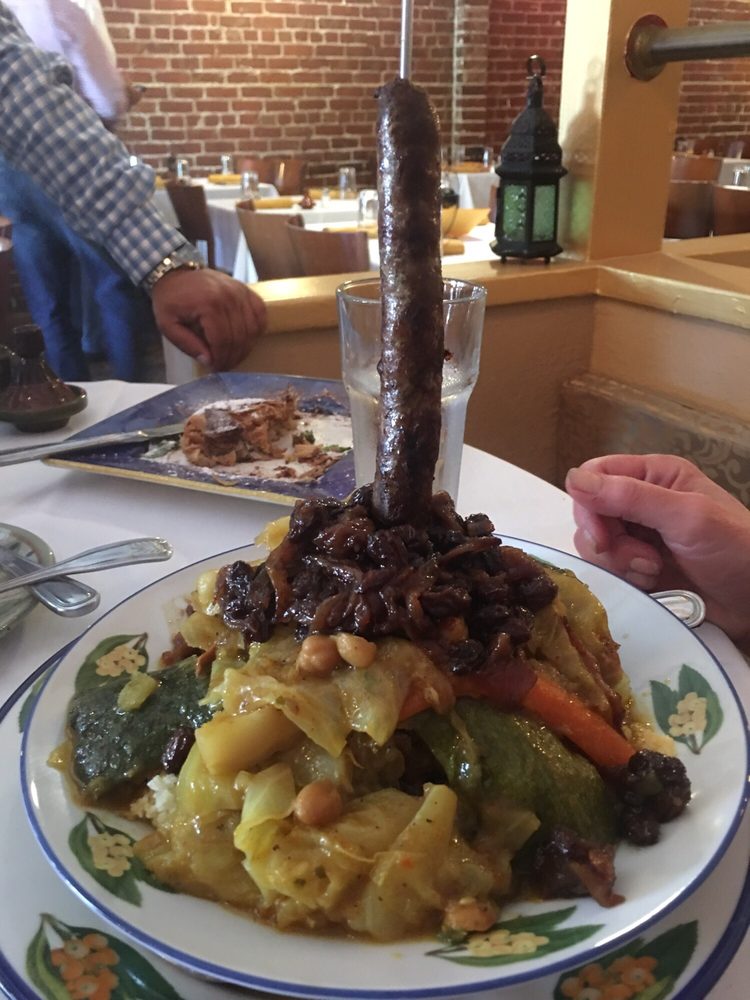 I will reply to the other parts of the post separately.

It is not the equal of Cafe Zitouna/SF, however. Aziza’s duck bastilla was getting skimpier ever year; we did not try it at Mourad.

Last time I missed out at getting the bastilla at Zitouna when we inquired at the end of a meal and they said it took 20 minutes. Is the Tunisian version different from the Moroccan version?

The other issue is price. This is not a bargain cuisine; there is a cost not only for the meat-heavy dishes but the labor-intensive recipes.

I agree. I was a bit surprised that the lamb cous cous was over $30 when the chicken version was low twenties. I understand the labor, but seems like $8 for a switch of meat is a bit much.

Fish is available only on Fridays, as a special.

I’d be curious what kind of ‘Moroccan’ prep they do. I’ve only been to the touristy seafood shacks in coastal towns, and they just grill the seafood with salt, so it’s not very exciting.

I’d make sure to get the lamb shank next time too. Thanks!

Tunisian vs Moroccan: can’t say, sorry. Can only report Zitouna’s bastilla was the way everybody used to make “back in the old days”; e.g., the '80’s.

The Royal Couscous is a really big serving. There is a ton of couscous in that bowl. I had enough couscous to give some to my spouse for his lamb shank; plus we took enough of the Royal home for a full dinner. At home I added a few links of merguez and a small bowl of curried lentil soup, and the leftovers fed both of us.

You and me both, LOL. Fish doesn’t seem to be a popular choice at Moroccan restaurants - even Aziza at its most fusion-y only offered a couple of seafood choices. OTOH, really fresh fish doesn’t need much “gilding on the lily”!

We loved Aziza (and have visited throughout its various menu changes), but Mourad not so much. Mourad is like Taj: Californian with a tiny bit of ethnic accent.

What about Mourad’s shared ‘family meal’?

Can only report Zitouna’s bastilla was the way everybody used to make “back in the old days”; e.g., the '80’s.

Mourad’s Family Meal - didn’t notice if there was one in particular. All the entrees are shareable. The lamb was enough that DH and I brought half of it home, even though we are big meat eaters.

Bastilla is an expensive banquet dish, not the starter that everybody thinks it is, LOL. The bad versions: