We went to Reem’s, which is right next to the Fruitvale Bart station in Oakland, had the mana’eesh that they are known for, as well a number of other baked goods.

The highlight: the Draymond Green . No, not the dude from Golden State Warriors. Its a seasonal man’oushe named after him that will be served until next week. We got the version with basturma, an air dried cured bacon that added a smoky and salty crunch to the wrap. The flat bread was seasoned with herbs, and fresh off the saj (the dome mounted on top of a griddle in their shop), along with mozzarella, goat cheese, herbs and dressing. Its one delicious wrap, though certainly not cheap at $14 for ours with basturma. Its filling. 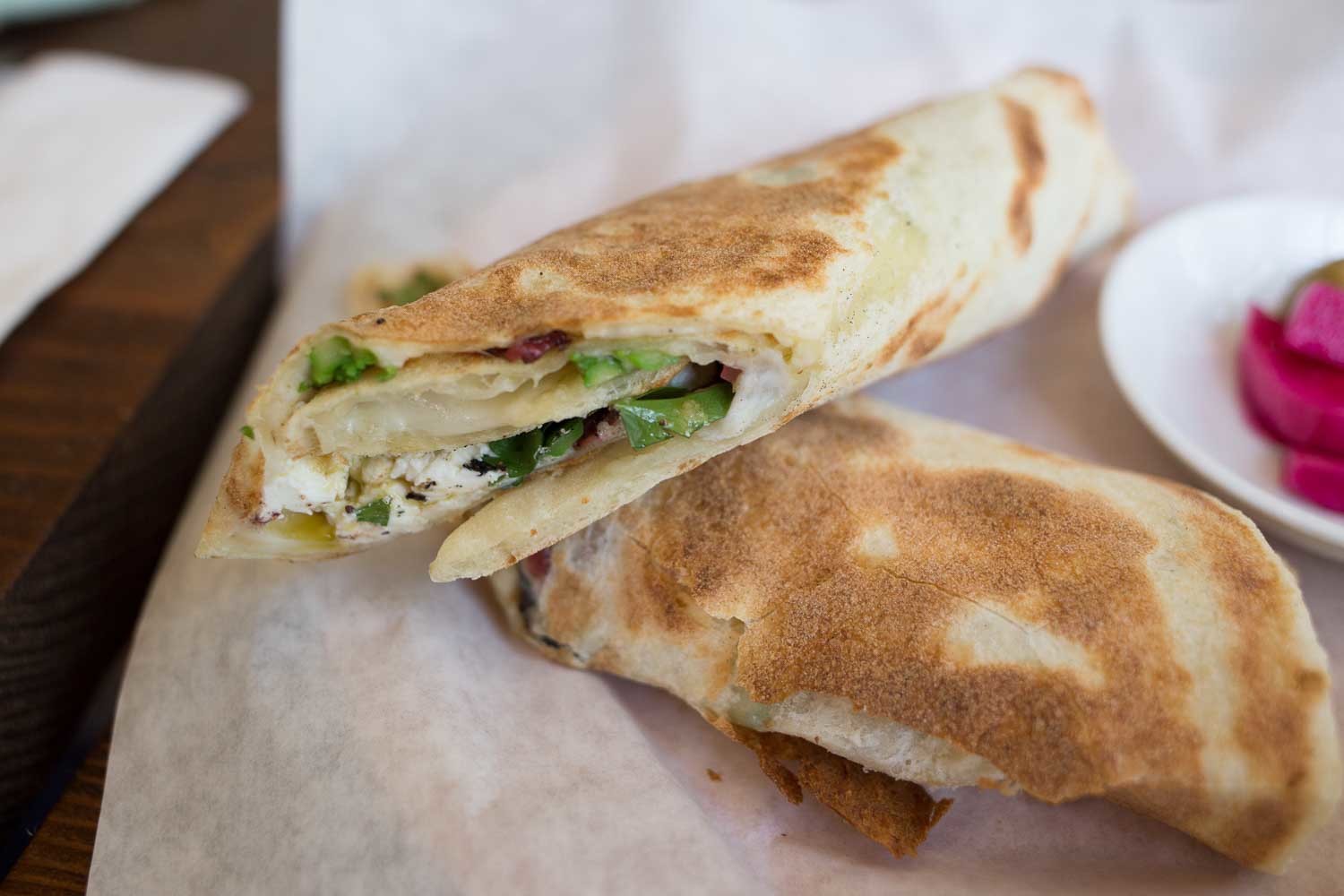 A piece of basturma: 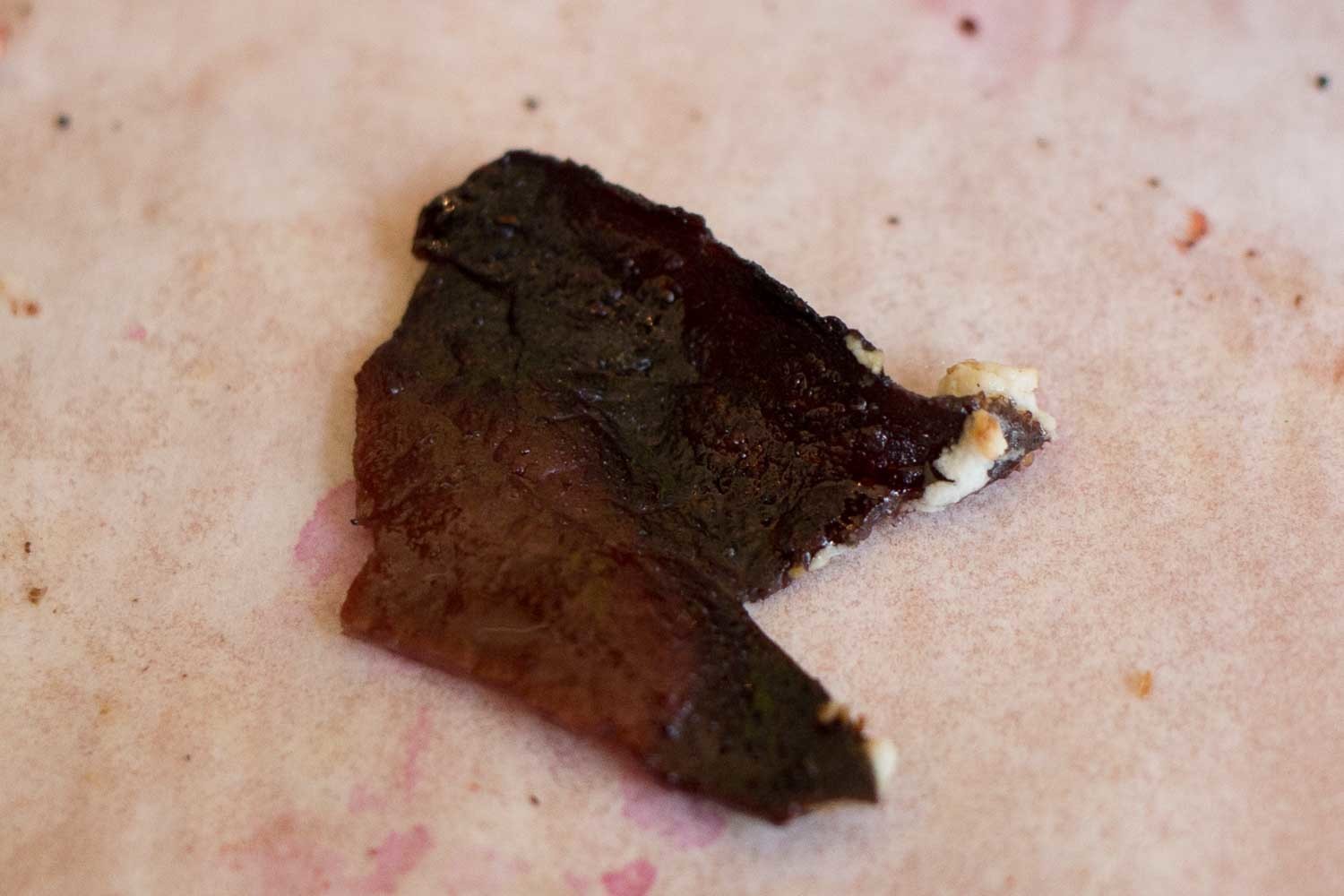 The semolina cookie with date, mildly sweet, was also delicious. Its a Eid special celebrating the end of Ramadan. 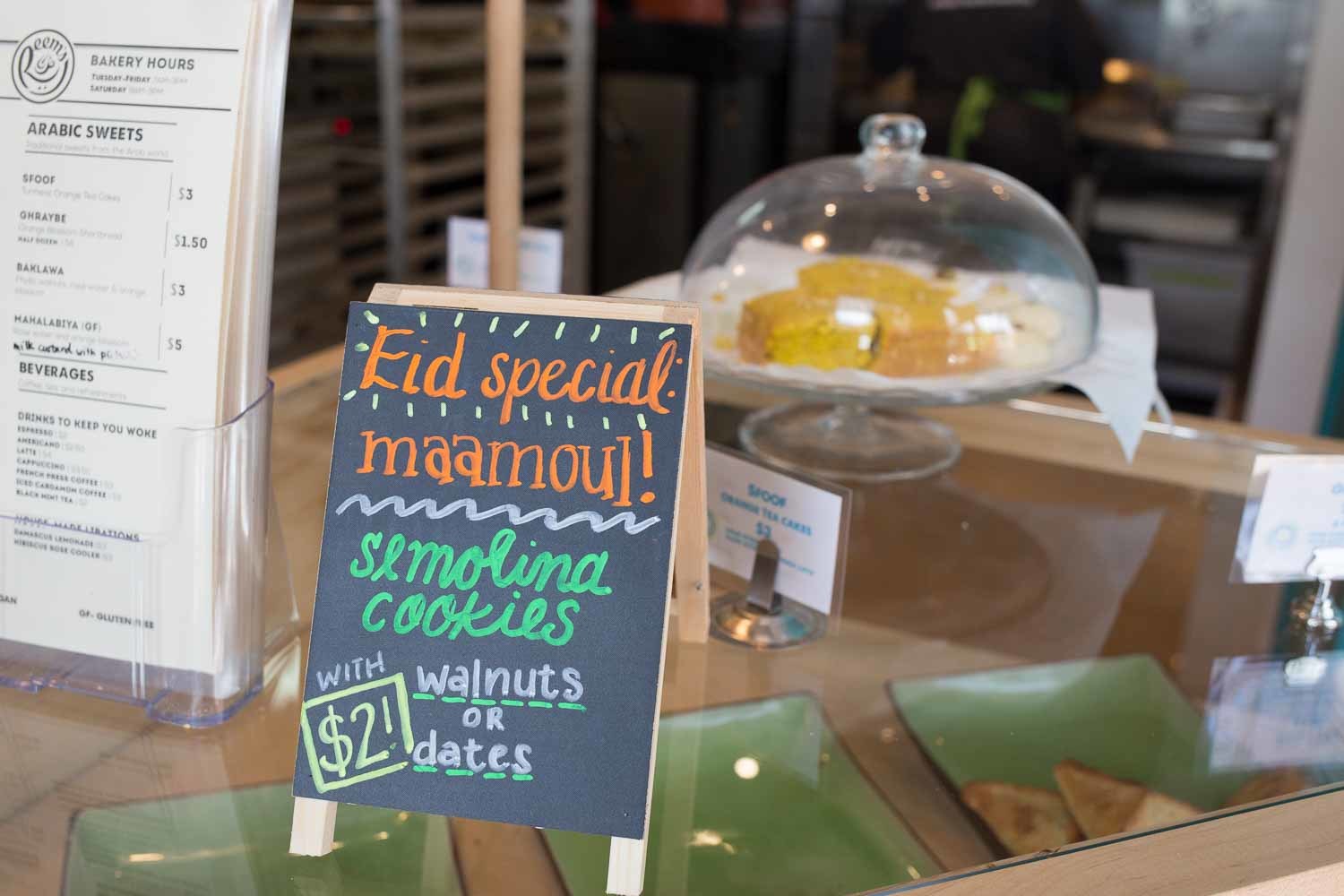 The Pali Cali is a man’oushe with sumac-braised chicken breast. The meat was a bit dry. Would have loved thighs instead. 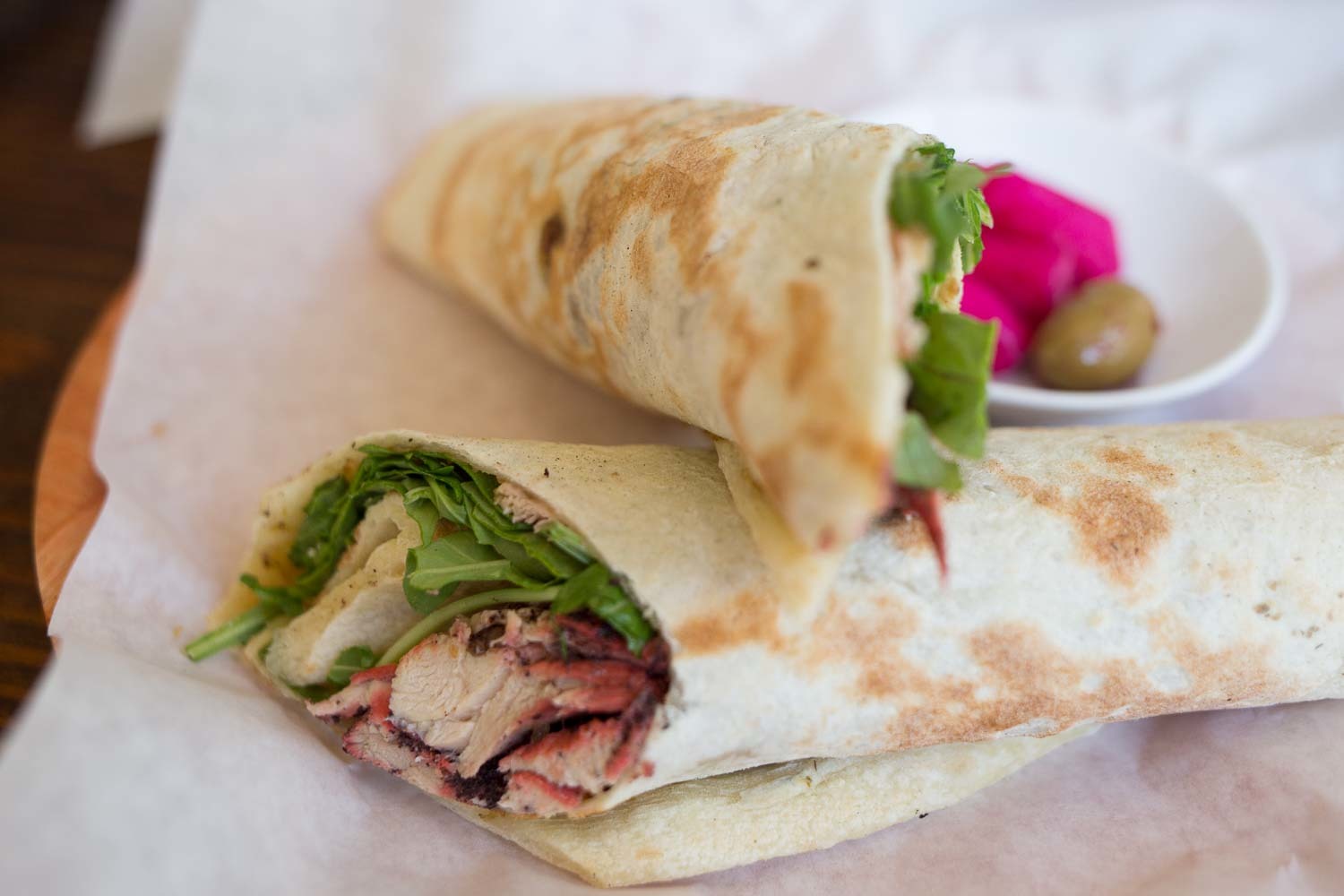 The spinach and onion turnover, the sfoof (tumeric orange tea cake), orange blossom short bread were decent. Baklava had a hint of rose water and was fragrant in addition to sweet. 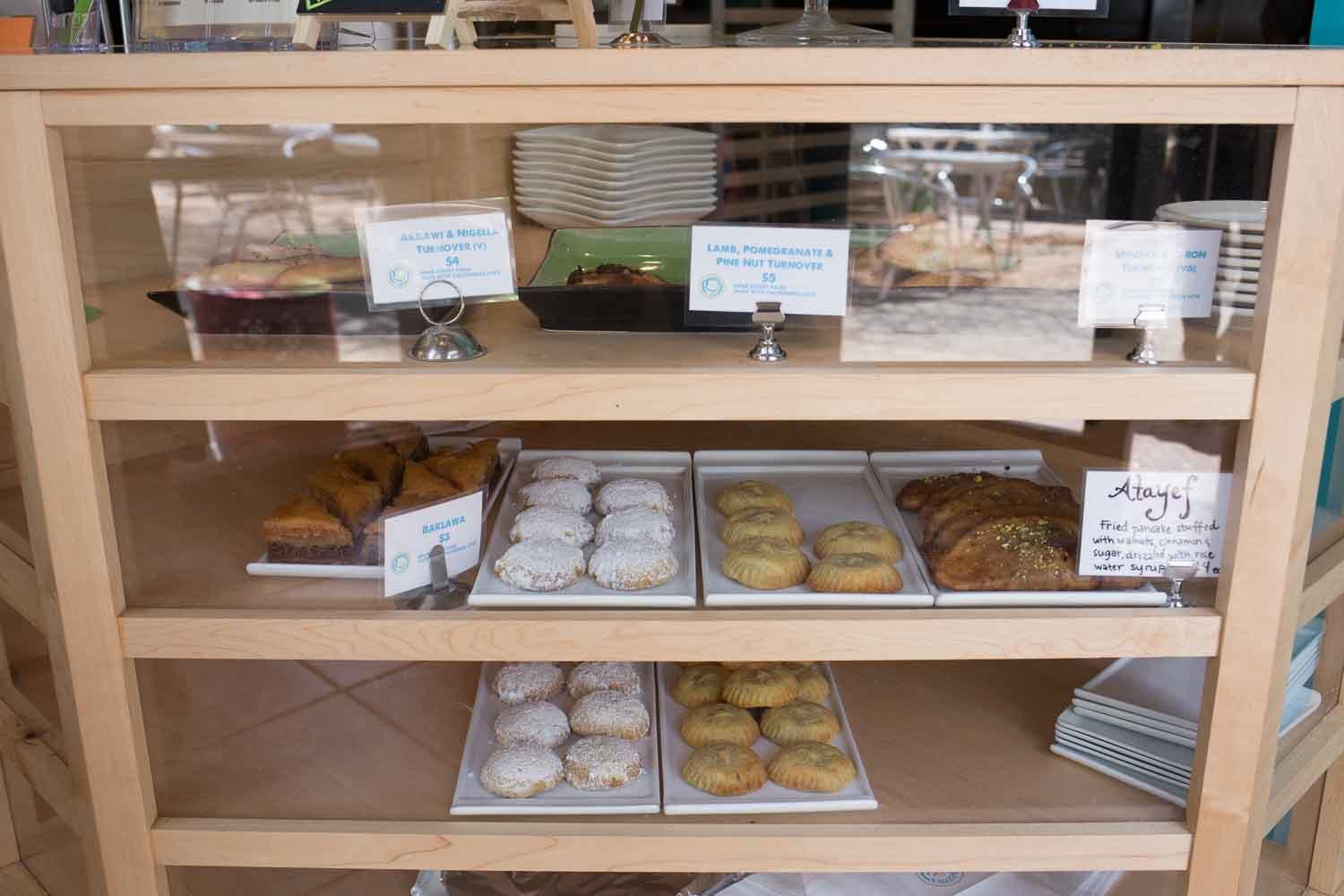 Forgot what this was called. But its a custard type dessert with ground pistachio sprinkled on top. Its adequate. 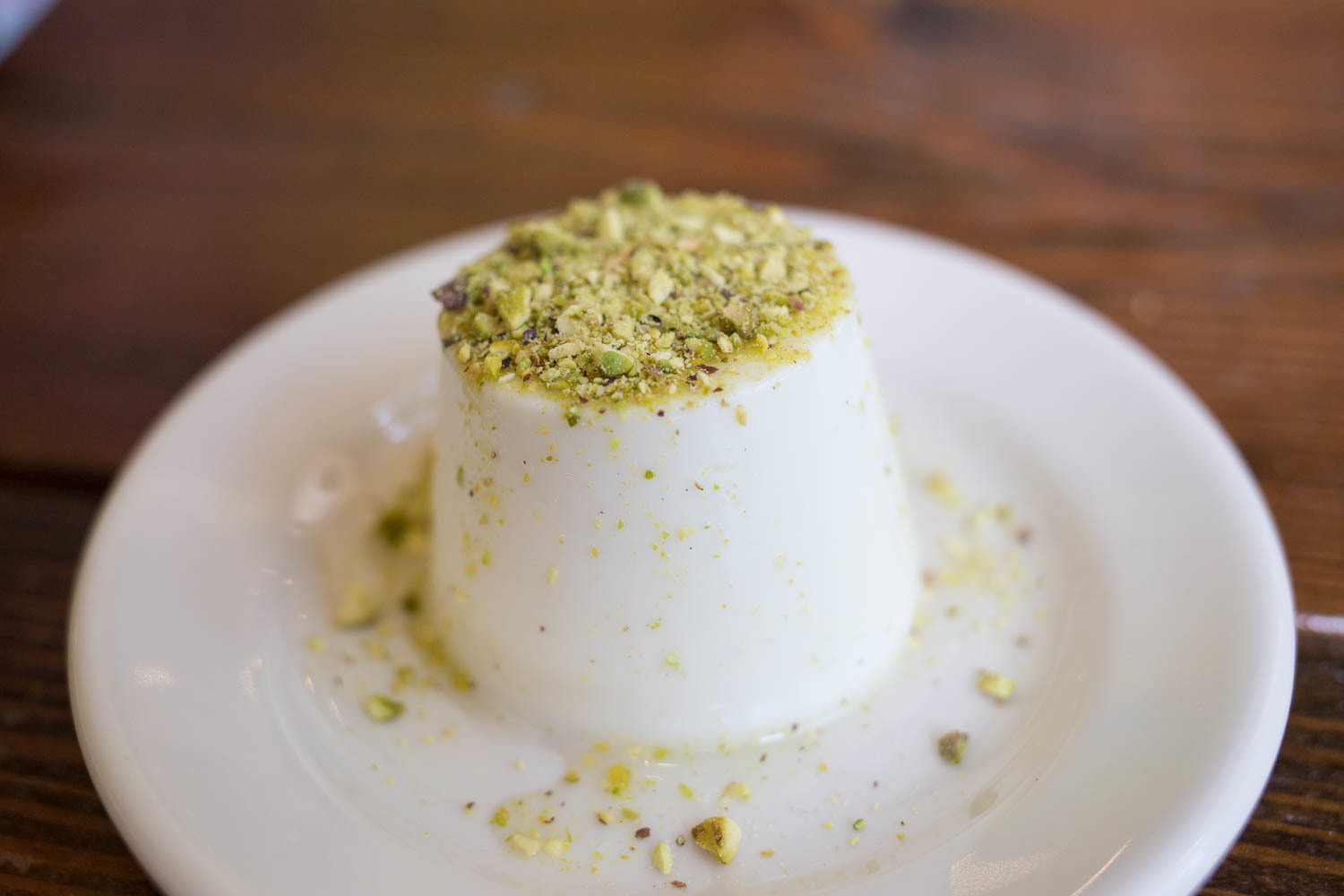 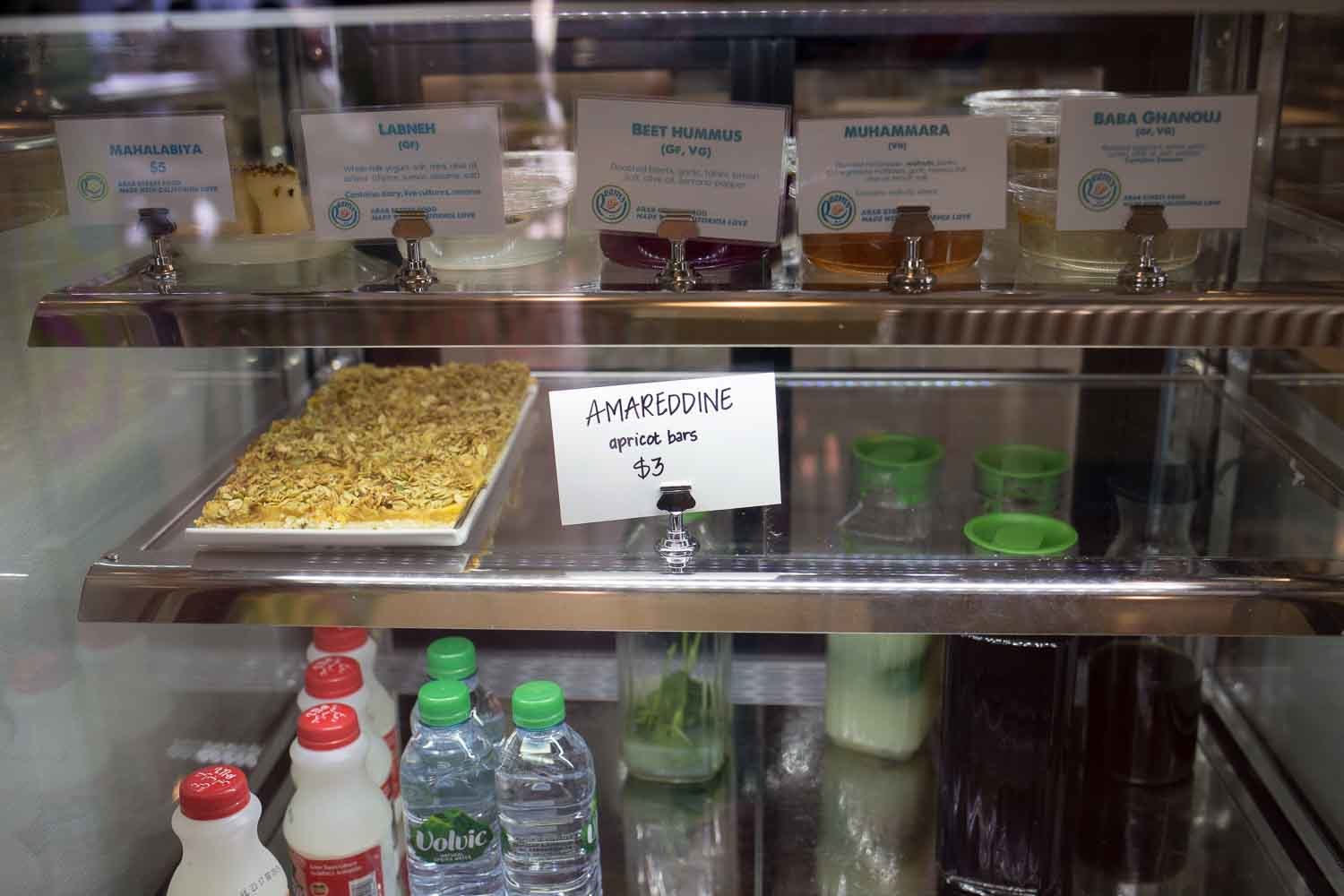 Reem Assil in the open kitchen. Saj on the left, used for mana’eesh during lunch. Oven on the right, used for breakfast. 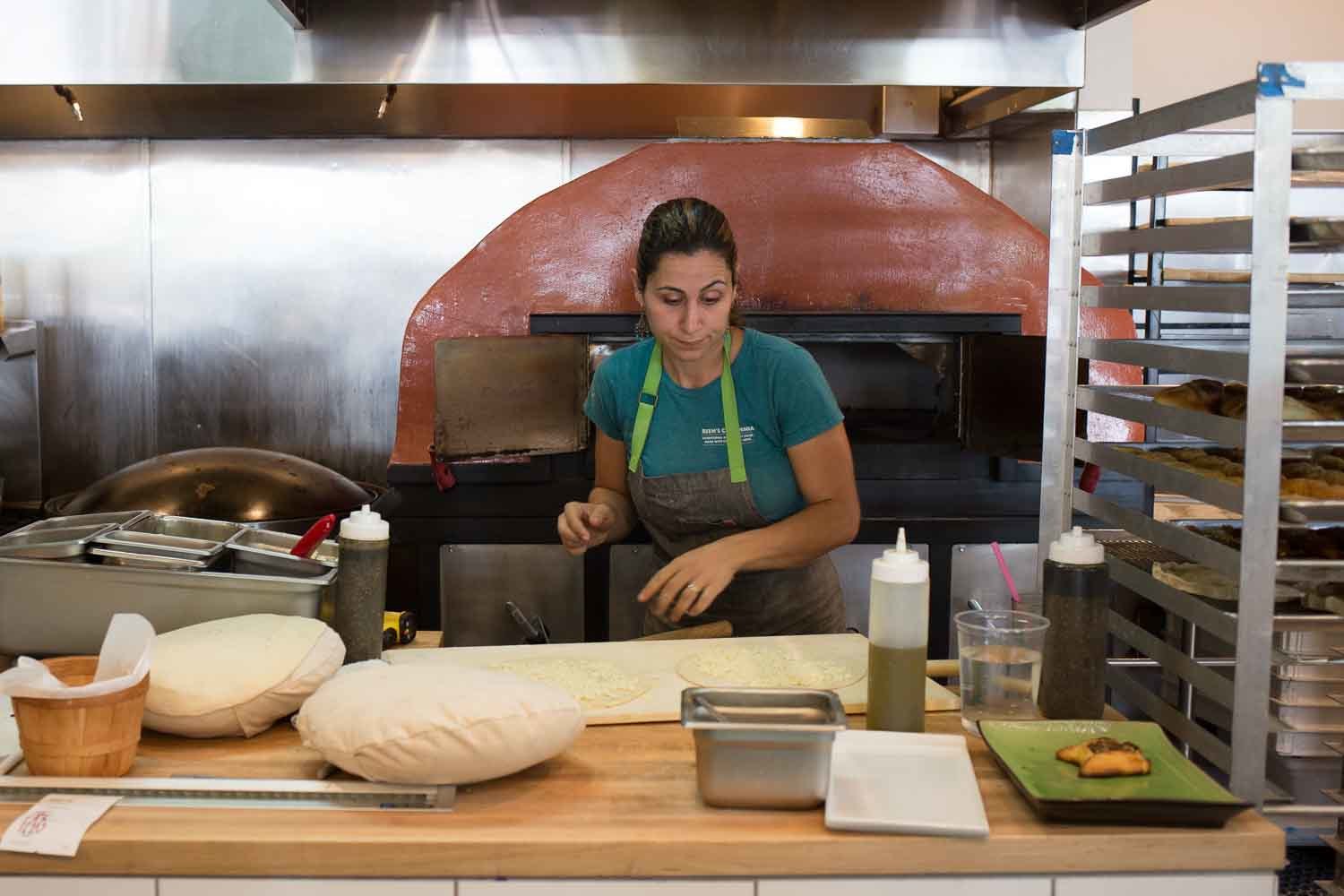 Reem’s had been on the list to try for a while. When I looked into what to eat there the day before we went, I saw that there was a uproar about the mural of Palestinian activist Rasmea Odeh in the eatery right by the Fruitvale BART station that prompted a flood of negative Yelp reviews and article comments. Oscar Grant at the bottom of the mural. I 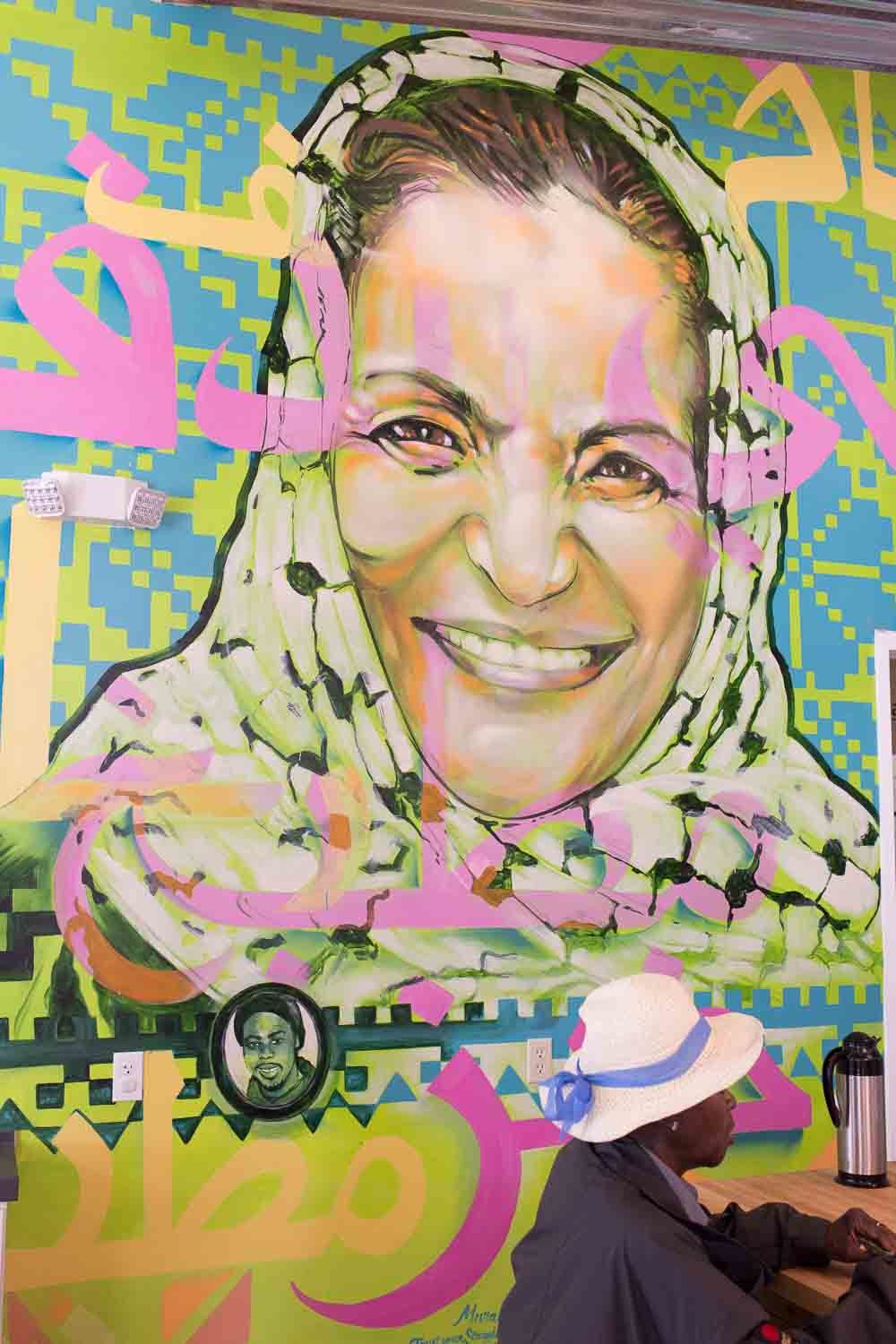 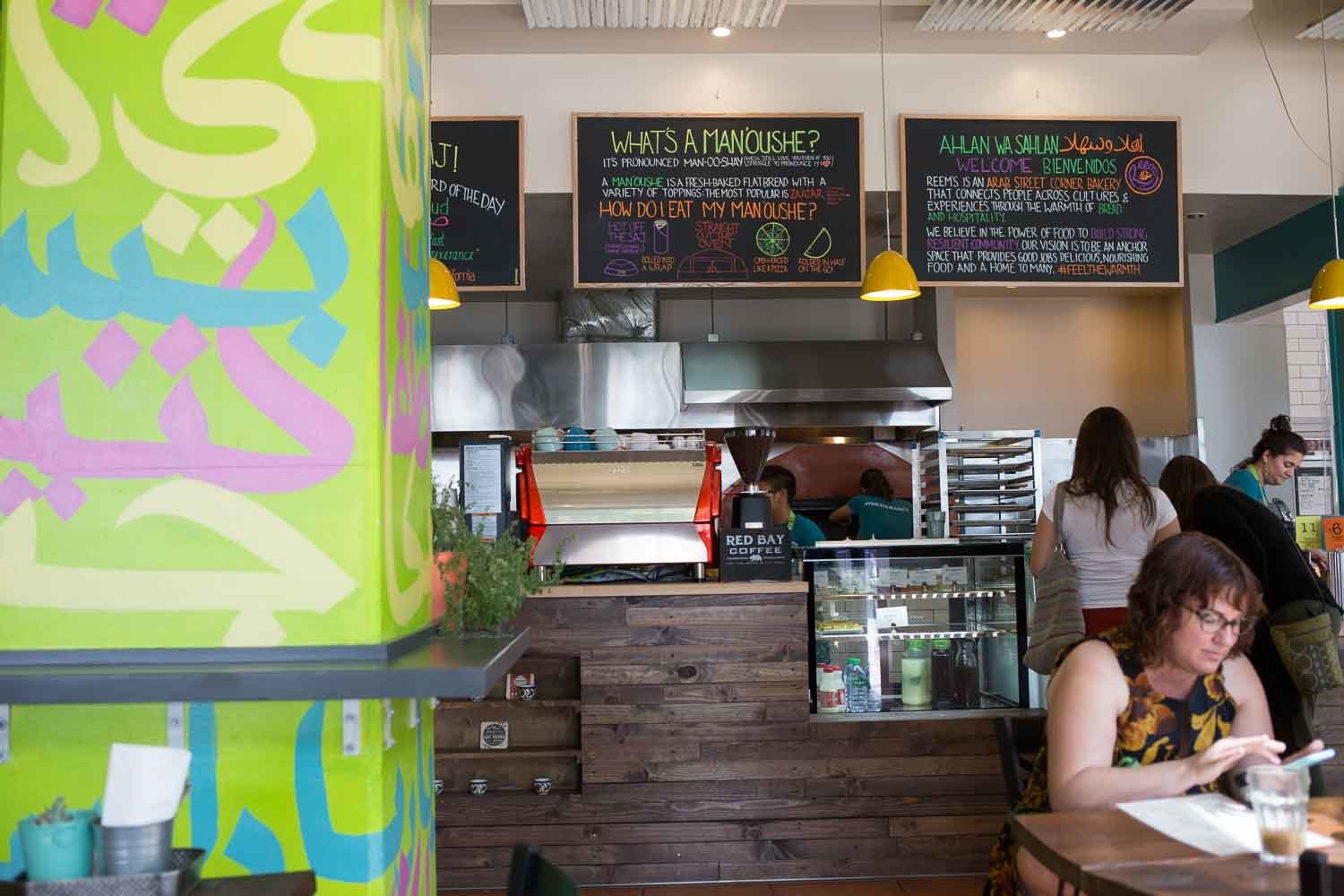 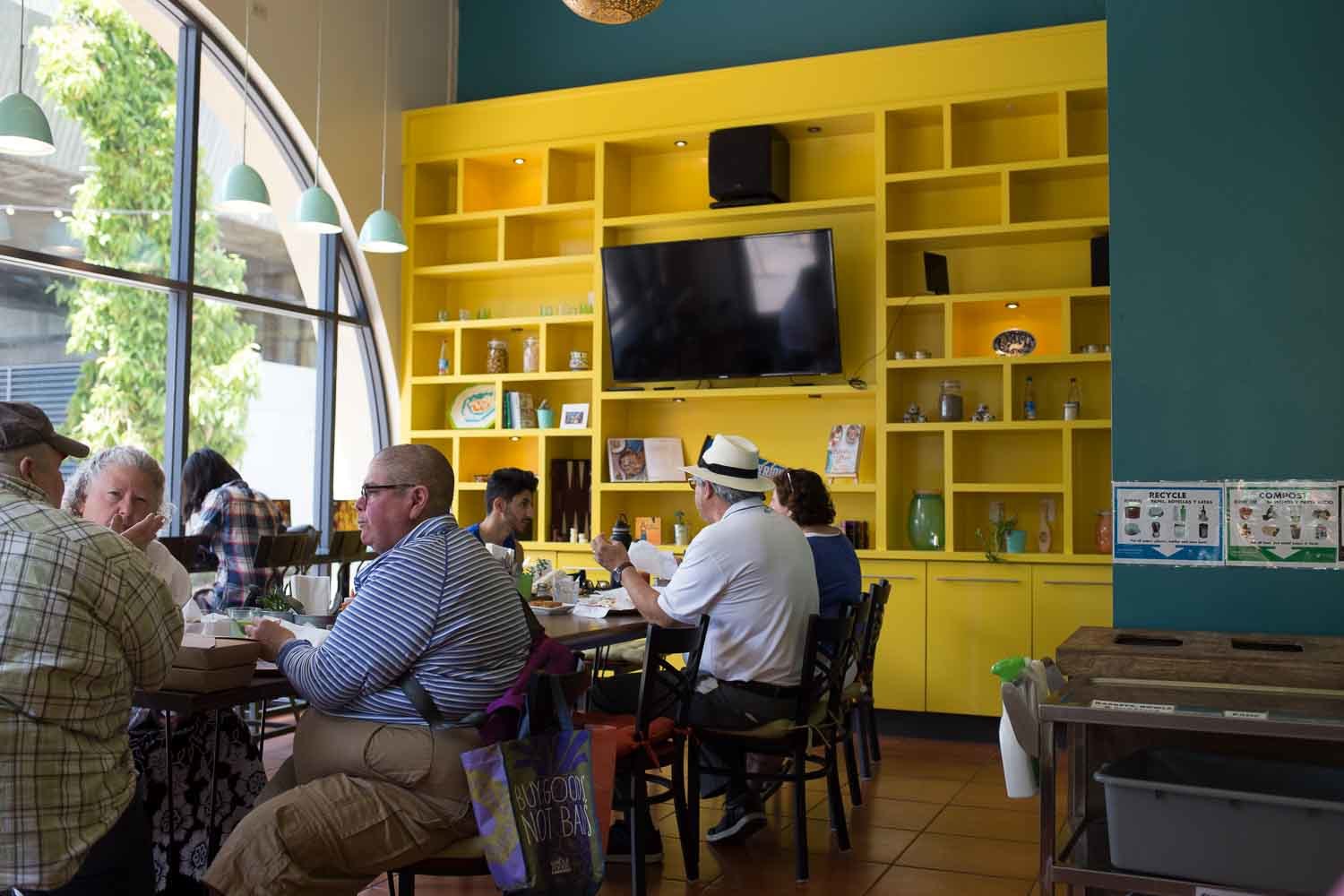 6 Likes
Underrepresented national cuisines in the SFBA
2 Days in BA. Where would you eat like a local?
East Bay Street Food Recommendations
tm.tm (Therese) June 25, 2017, 9:37pm #2

I also stopped by this weekend. Things are on the pricy side, but quite good. (And things are expensive everywhere now.) The breads are being made fresh.

In addition to a wrap, I got an atayef. Filled with walnuts and drizzled with a sweet syrup, it was the best I’ve ever tasted (though I haven’t sampled many). Even with the syrup it wasn’t too sweet for me, and the pancake remained soft yet with a pleasantly firm texture at the edges and the spiced walnut filling was great. This is a treat typically served during Ramadan, so who knows if it will make a reappearance. 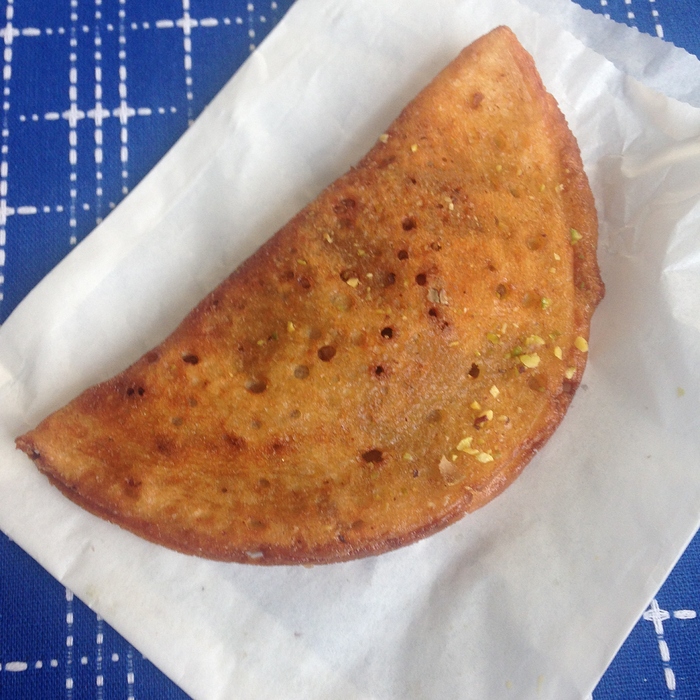 I’ve enjoyed Reem’s goods at Mission Mercado and I hope she will be successful in her B&M and that HOers will patronize the business whenever they are in the area. EaterSF tried to hype the “controversy” over the Rasmea Odeh mural, which I think was a disservice because the only prominent objections the website cited were an op-ed in a Jewish newspaper (by a venture capitalist in Israeli tech), and the Breitbart web site. which labeled Reem’s as an “Arab culture-inspired bakery" (the horror!).

I’ve read that pastrami evolved from Romanian basturma. Most Russians/eastern European markets in the Richmond district sell it as well as Samiramis.

Is Reem’s still selling at the ferry building on Saturday? I hope so – the bread she uses in her wraps is fantastic and in company with other Bay Area carb all stars.

I also tried this place for the first time this past week. Overall I really liked it.

I too had the Pali Cali, and I also felt the meat was a bit dry. The caramelized onions on it were good but were spread quite thin. I felt like if the sandwich had a sauce on it (yogurt-based? tahini-based? garlic sauce?) it would have made it better and more complete. Or just more substantial caramelized onions. However, having said all this, I definitely enjoyed it.

The pickles and olives are phenomenal. 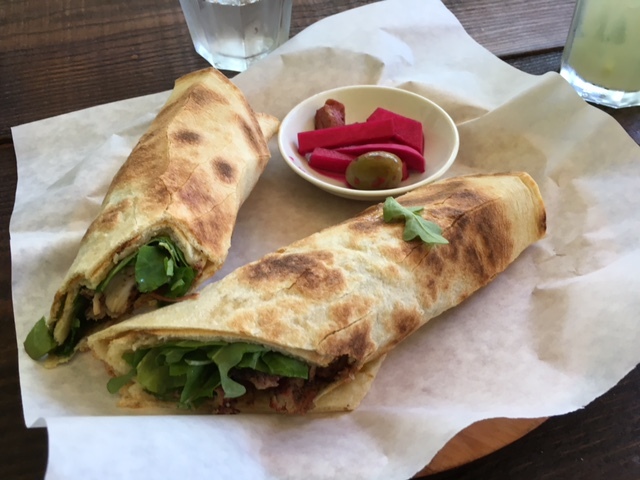 Leaving, I purchased the simsim, and I thought this was great—just as good as the excellent version of this that I had in Istanbul. I would happily go back just to buy this as a snack! Looking forward to trying other baked goods here as well.

The lemonade w/ orange blossom and mint was pretty strong but good. Would be nice to mix it with some seltzer, and I’ll try this next time. 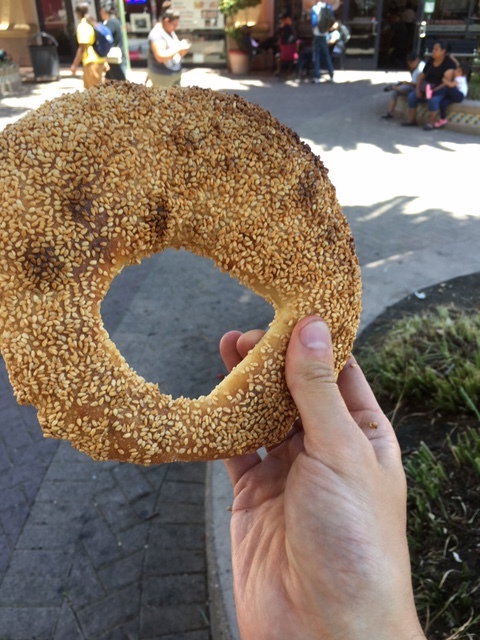 I avoid the Ferry Building like the plague on Saturdays so I have no idea who sells there.

Yes indeed. I forgot to point that out. What an oversight on my part.

In addition to a wrap,

Which wrap did you try? Thoughts?

What items do you like most? I am trying to think what to branch out to next time. This time I ate some items Peter Lawrence Kane mentioned in SF Weekly, except for the specials.

I believe the man’oushe (several varieties) was the only thing they had at the Mercado when I was there though I might have overlooked any pre-packaged items they might have had for sale. 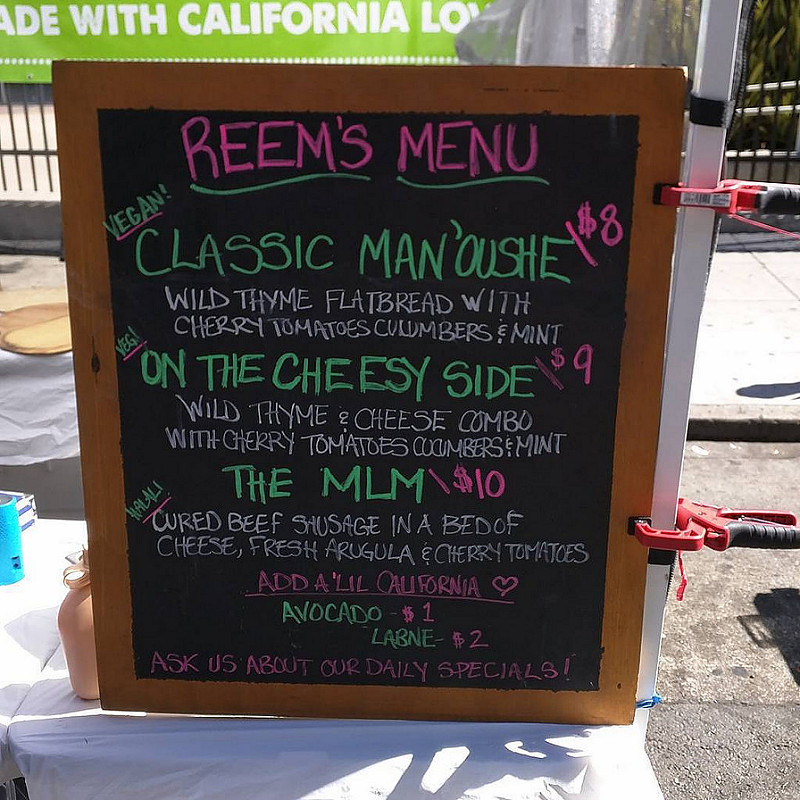 Big fuss or not, the mural is of a terrorist murderer, not an “activist.”

Much as the food sounds good, the owner is open about pushing her political views through the restaurant and so I won’t be eating there.

At the B&M, mana’eesh was the only dish cooked to order, besides breakfast. Other things like hummus are pre-packaged. 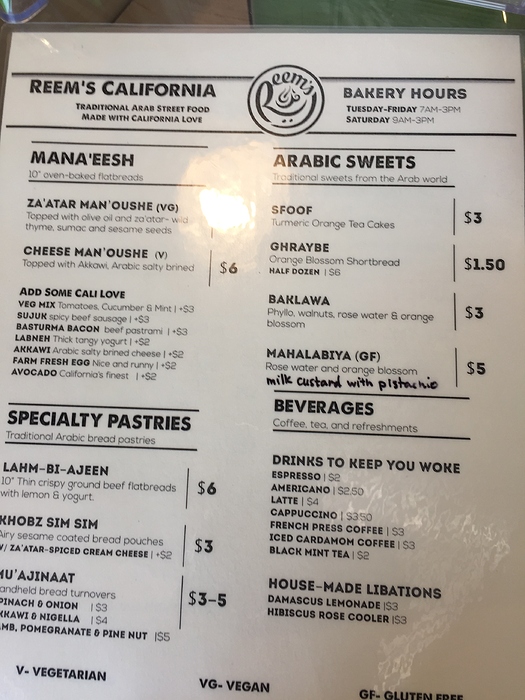 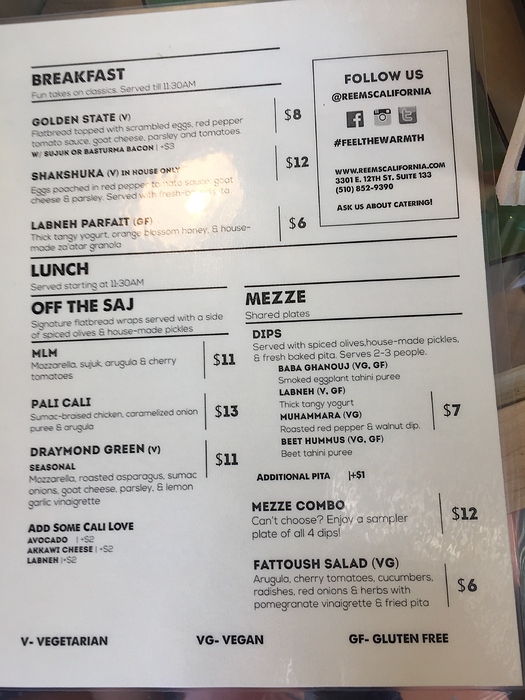 I was wondering about the change in spelling, but apparently mana’eesh is just the plural of man’oushe. Why This Lebanese Street Food Is Gaining Traction in the U.S.

It’s not as popular as pizza or falafel, but someday it could be.

I’ve had the wraps at one of the pop-up stalls around town, and I agree that the chicken was a bit dry, but the beef “bacon” was tasty. Planning on going for lunch this weekend, I’m excited to try some of the new baked goods on offer (I’m currently obsessed with nigella seeds). Thanks for the write up!

They still run their Saturday morning ferry building farmers market stall. I got the classic mana’eesh has zaatar, olive oil, cherry tomatoes, cucumbers and mint. As a bready product, this is on par with some of SF’s best pizzas. I love how the toppings fuse with the crunchy, elastic bread, and that each bite of vegetables spreads the flavors of charred wheat and seasonings.

Who’s cooking there? Last time I was at their Fruitvale place for a Saturday lunch, Reem was the cook. I am glad the standards hold up if someone else is cooking at the Ferry Building market.

Good question! I was too transfixed by their set up to look at who was cooking— those sloping griddles are pretty cool ( also, I was running back-and-forth between them and El Molina Central which had some rockin squash blossom quesadillas)

I tried their eggplant mana’eesh this Saturday at the ferry building. It’s delicious as all hell, strong on the eggplant flavor and garlicky oil, but I felt that the flavor of the flat bread didn’t come across as well as in the other wraps.

As much as I like their Ferry Building offerings, I like that they offer simpler items at the brick and mortar like the Khobz Sim Sim turnover you mentioned, a pouch slit at the top filled with Akkawi and nigella seeds. I find the combination of the toasty bread, briny curdy cheese, and aromatic seeds irresistible —- it bridges two food memories of my youth—- everything bagels with cream cheese and farmer’s cheese pierogies. 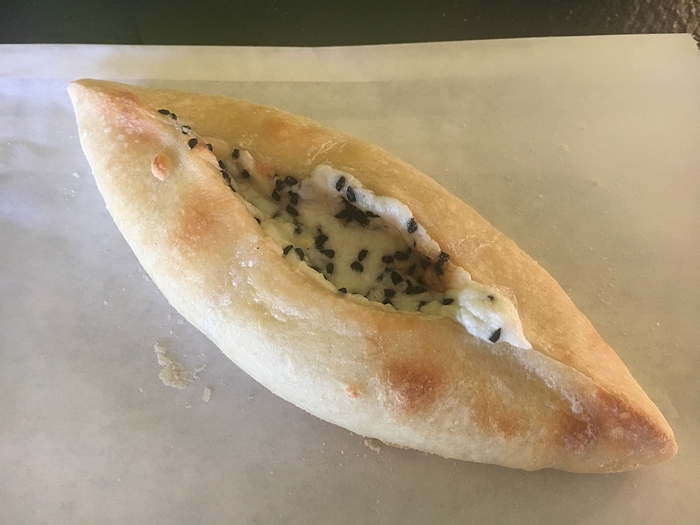 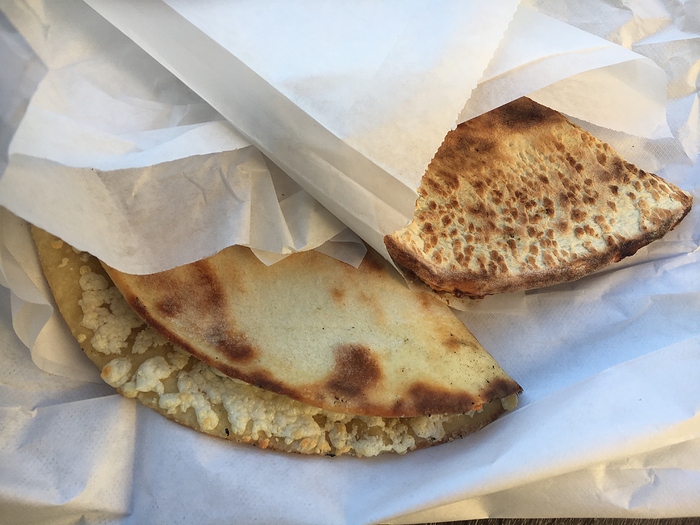 They were closed that day. But here’re the dinner and Saturday menus. Has anyone tried the ful akhdor (fava bean and lamb stew) from the dinner menu? I’d imagine how well this stew dish is will tell us a bit about how Dyafa’s non-flatbread dishes will be. 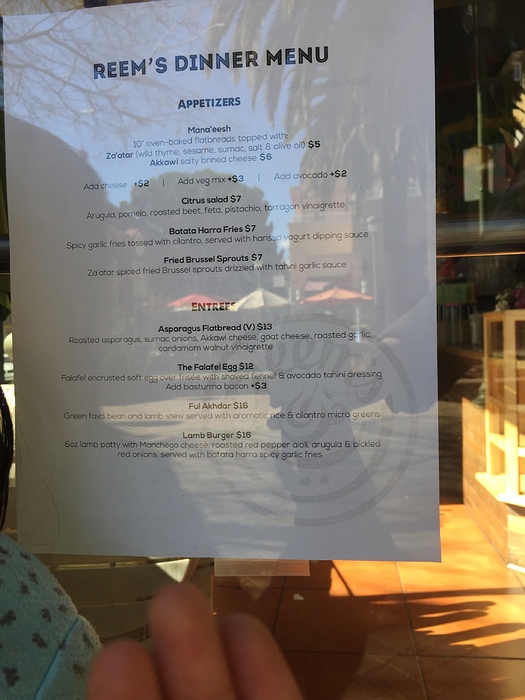 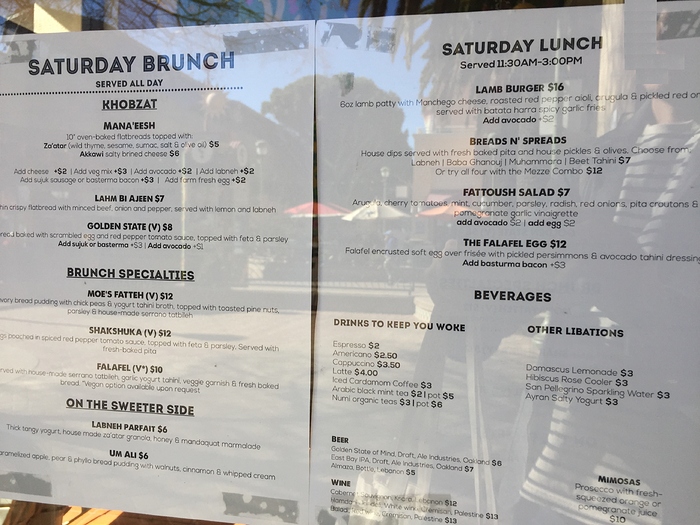