tonight mission pie hosted a pop up by nyum bai, a local cambodian enterprise working with la cocina. it was a little hectic, with a large turnout, limited seating, and a bit of confusion service wise, but pretty solid fare from a cuisine with otherwise very little presence in this city.

the skewers looked like they would be dried out, but rather they were a little chewy but quite tender. typing this right now i’m chewing on the leftovers cold, and they’re still good. slight heat, strong lemongrass flavor. came with shredded carrots, cucumbers and green papaya pickle relish.

the khmer bao came four to an order, with a generous filling of ground pork strewn with bits of rice noodle, wood ear mushroom, lap cheong, and a slice of hard cooked egg. i’m too lazy to resteam them to soften the now dense dough, but they came out hot and fluffy.

but i was there for the kuy tio. i’ve also seen this dish romanized as kuy teav, ka teav, among other spellings. i first had this at a little spot in stockton and i’ve been trying to find it in the city since then, but no dice. you can find it at viet places as hu tieu nam vang, but…those are viet places. i don’t know if this qualifies as cambodia’s national dish, but it seems to come close.

this version seemed pretty spartan as far as garnishes go. no shrimp, fish cake, squid, liver, just about the pork. ground pork and two slices of slow cooked shoulder, cilantro, green onion, and toasted minced garlic over a generous (i would say over generous) mound of thin rice noodles with mung bean sprouts in a clear, clean pork broth with a bit of dried seafood sweetness and funk. i wanted more broth, less noodles. i couldn’t finish the whole bowl but i may have been the only one in my party to have that problem. the dish also came with a lime wedge on the side and slices of you tiao.

to spice things up, there was a dark brown hot sauce (tamarind based?), pickled whole bird chiles, and sliced pickled fresno chiles. my cambodian friend (who told me about the event) handed me a bottle of hoisin and said it goes really well with the soup. i grabbed the bottle but stopped, saying, “i don’t really like hoisin.” she said that cambodians tend to sweeten their dishes up as she squirted a healthy spiral of hoisin over her noodles.

which came really late, unfortunately. the system is order at the counter and they bring you your food at the table. i ordered first and received my food first, and she ordered second. there were six of us in our party and she received her bowl of noodles well after everyone else got their orders, and only after nagging staff a few times. i’m not sure if all of the monday night dinners at mission pie are this hectic, but the staff seemed overwhelmed.

for the price ($11-12, can’t remember exactly) i wish there had been more than two slices of pork. it was delicious, and tender, but it felt a little skimpy. or, the addition of some of the other toppings i mentioned above would be nice. there were too many noodles for the amount of soup, and i thought that was too bad because i loved the broth. but i will definitely be checking nyum bai’s site for future events. they cater as well.

oh and tonight they also had two kinds of cambodian jook, one chicken and one veggie. an ice cream sandwich, and a salad with tamarind dressing. 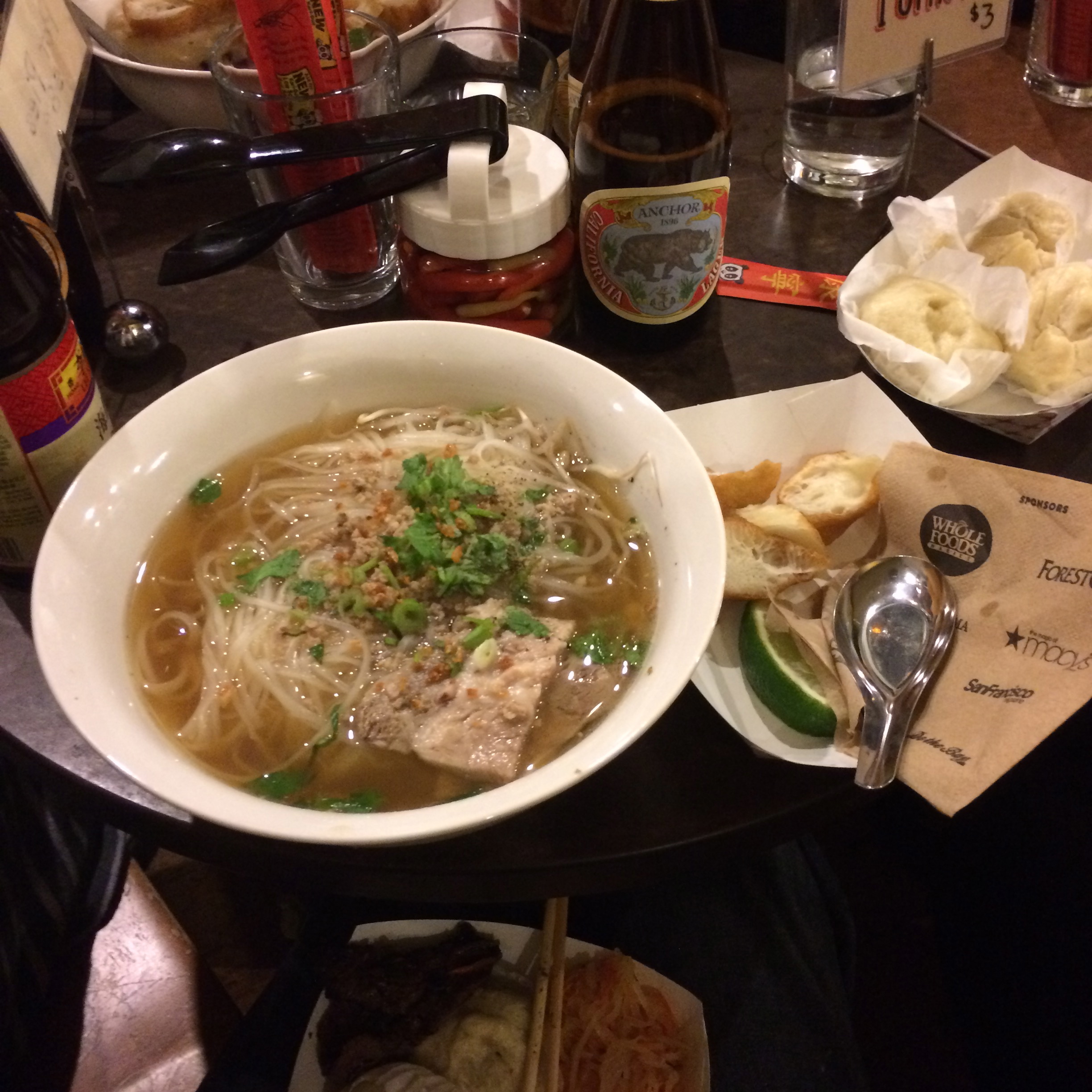 I was also there tonight. I had the Kuy Tio Phnom Penh as well, and the Nom Paow (Cambodia’s take on pork buns). The Kuy Tio was $12, and yes, light on the protein toppings, especially when compared to the Vietnamese version served at Ha Nam Ninh. I wasn’t shocked at the price, because the economics of a pop-up are a little different. Like you, I thought the broth was superbly complex, but I’m also the last guy to complain about too many noodles. They were cooked just right, remaining firm to the end, and none stuck together as sometimes is the case with rice noodles. I thought the plate of youtiao (or whatever it’s called in Cambodia) slices for the soup was nice touch as well.

I got to talk a bit with Nite Yun, the woman behind Nyumbai. She said Kuy Tio is sometimes served dry with broth on the side (like Ha Nam Ninh’s famous #25), and she may do it that way at some future event. She has another pop-up event next Sunday the 25th at Wise Sons. I’m not sure of the time or format, but I’m sure it will be posted in the social media.

I wasn’t too enamored of the Cambodian pork buns. The sausage filling was tasty enough, but too solid and chewy for a bao filling, and the piece of hard boiled egg was just kind if stuck in there 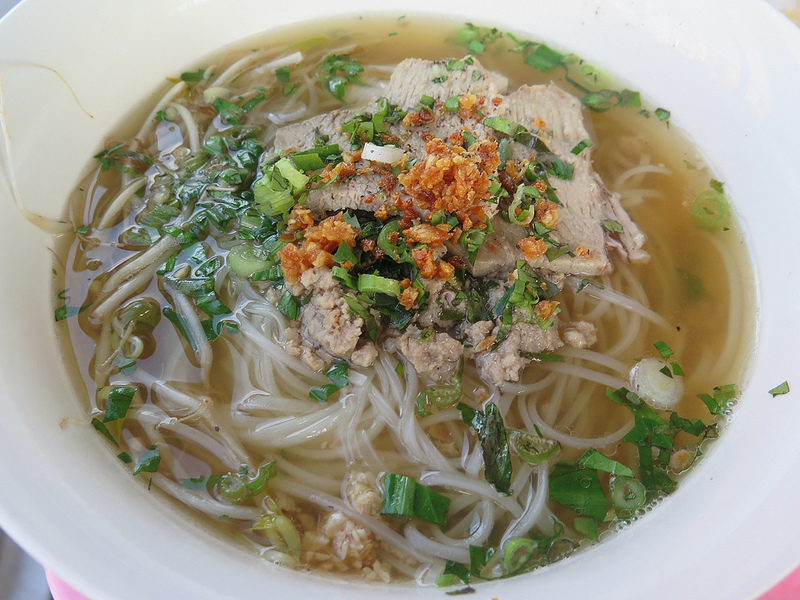 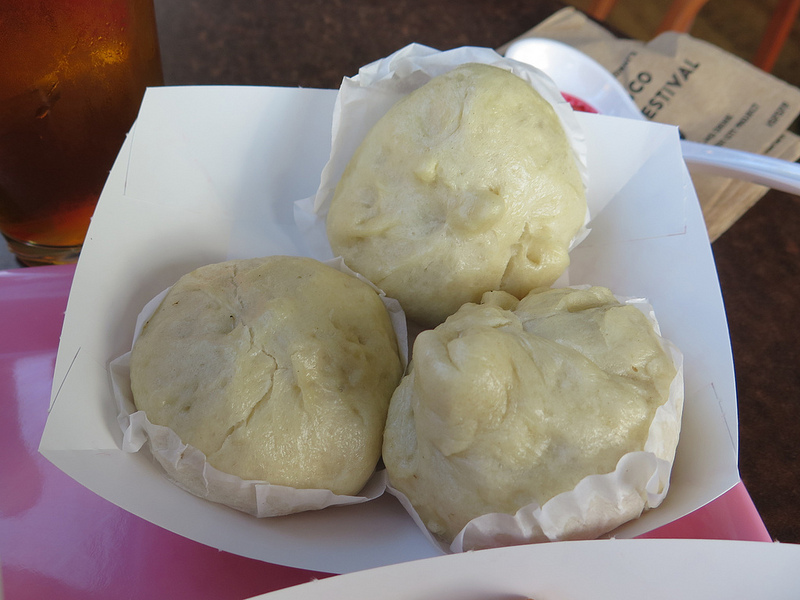 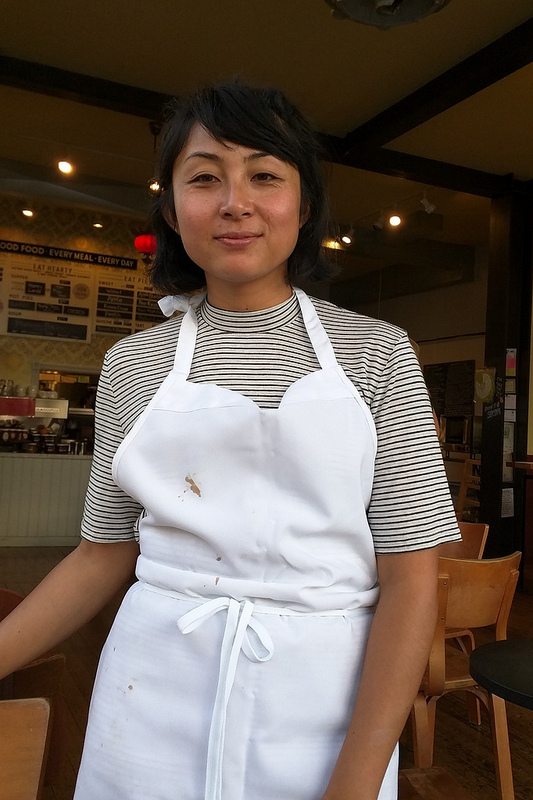 According to Nyum Bai’s Facebook page, it will become a regular pop-up every Monday and Tuesday night (6-10 PM) at Gashead Tavern (2351 Mission). Chef Nite Yun promises a different menu every week. 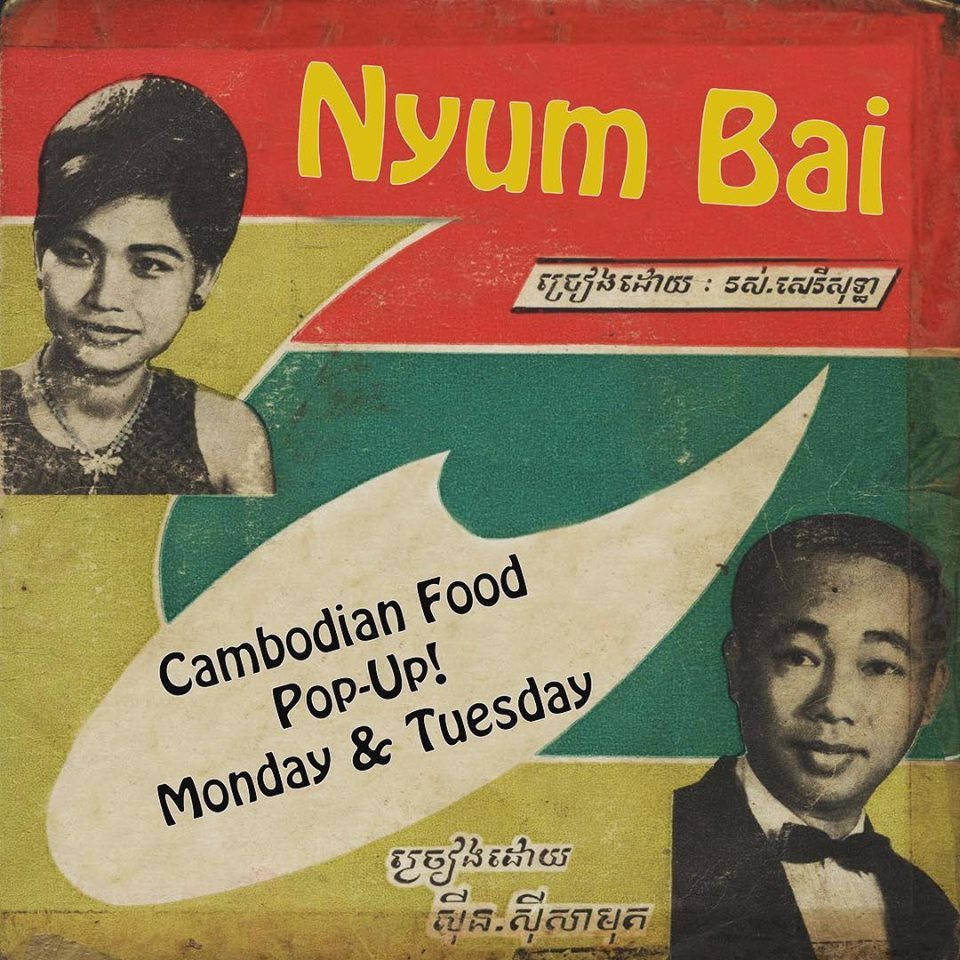 Looks like they have some more semi-permanent pop-ups scheduled:

They opened Monday in the Emeryville Public Market. 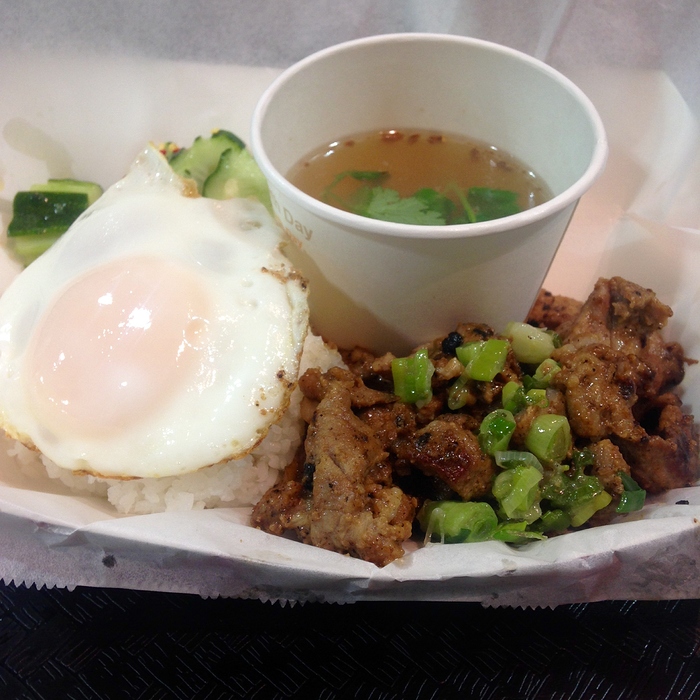 I really enjoyed the pork and bai (rice) this evening. The Kampot peppercorn pork was the star of the show–tender yet caramelized, lightly sweet, porky, and savory. The broth served on the side was the best version of this pork and shrimp broth I’ve had, usually from Vietnamese hu tieu Nam Vang. I’ll be back here to try the original version, Phenom Penh noodle soup.

Good meal. But where did the Phenom Penh noodle soup go?! 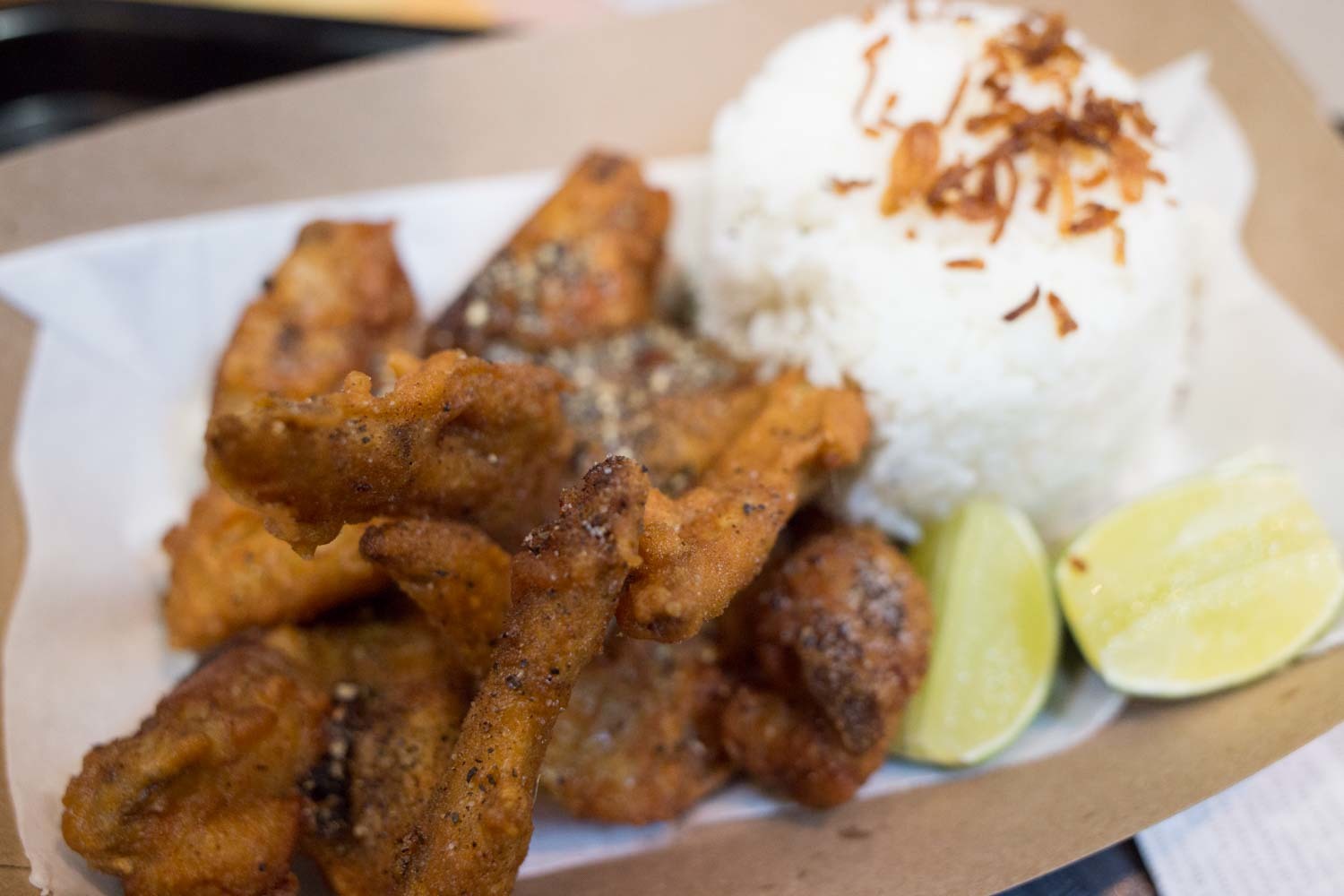 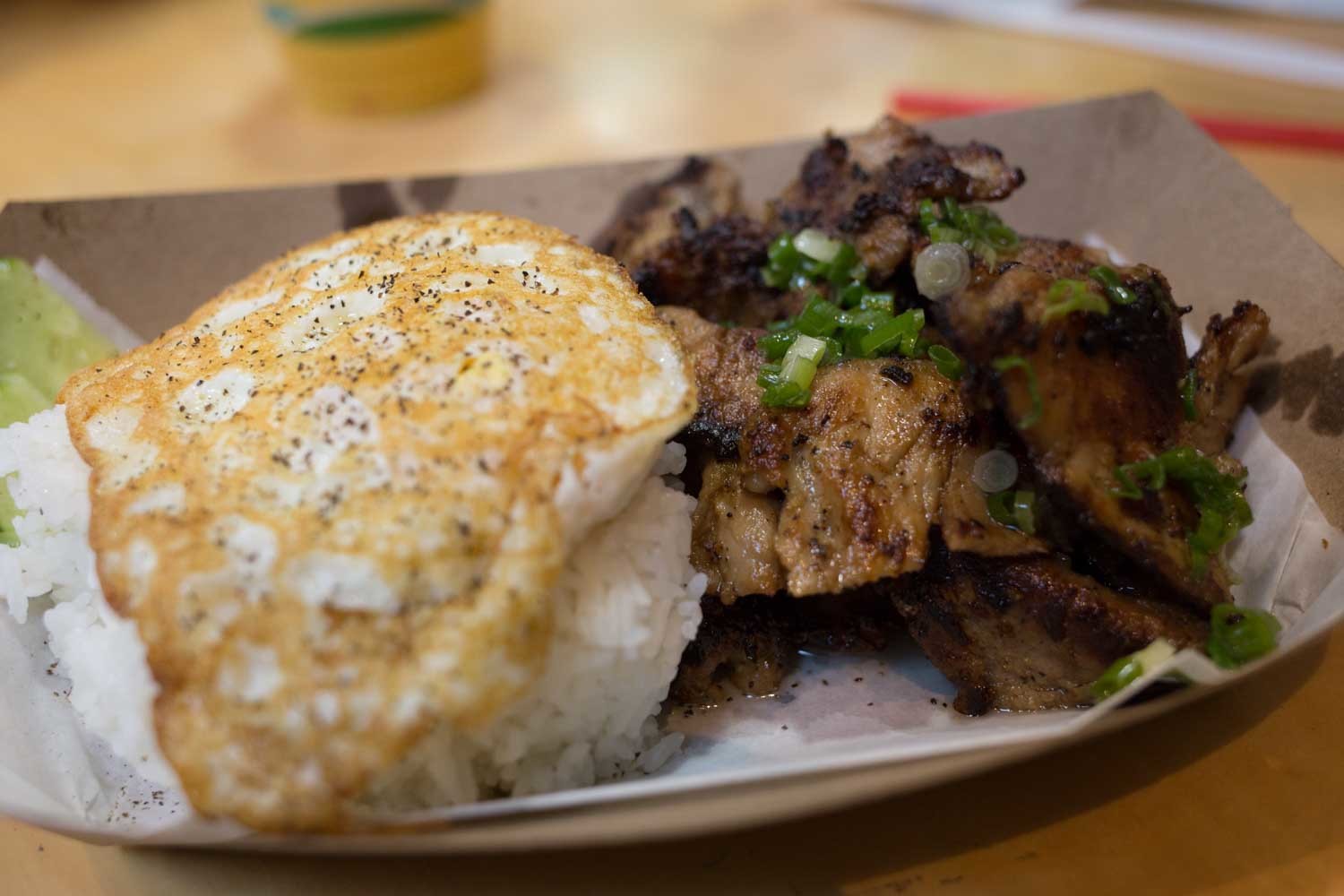 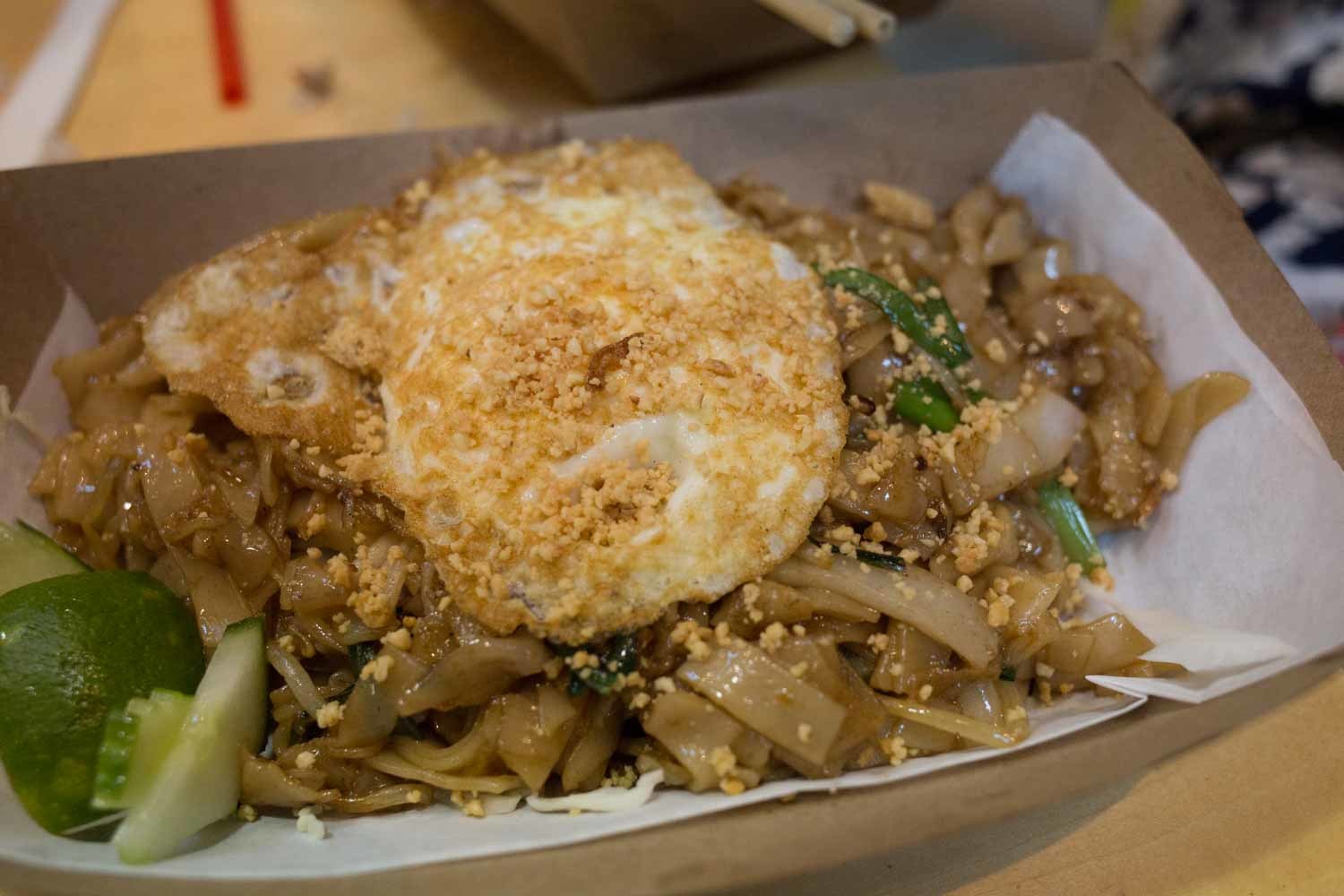 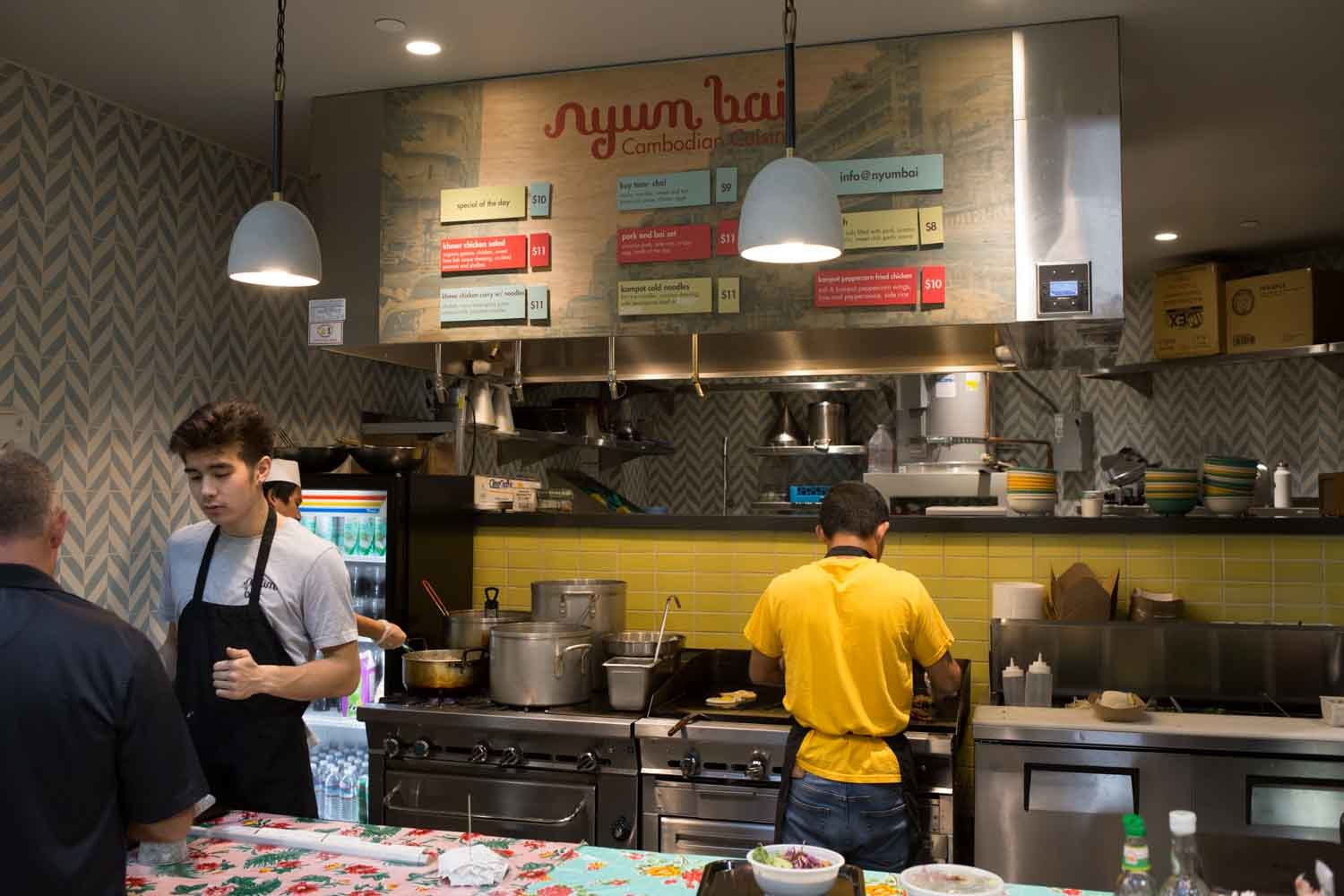 They were also out of soup when I stopped by a few months ago!

They didn’t even have the item on the wall menu when I visited. I asked about it and they pointed me to another noodle.

Permanently off the menu or do they rotate? 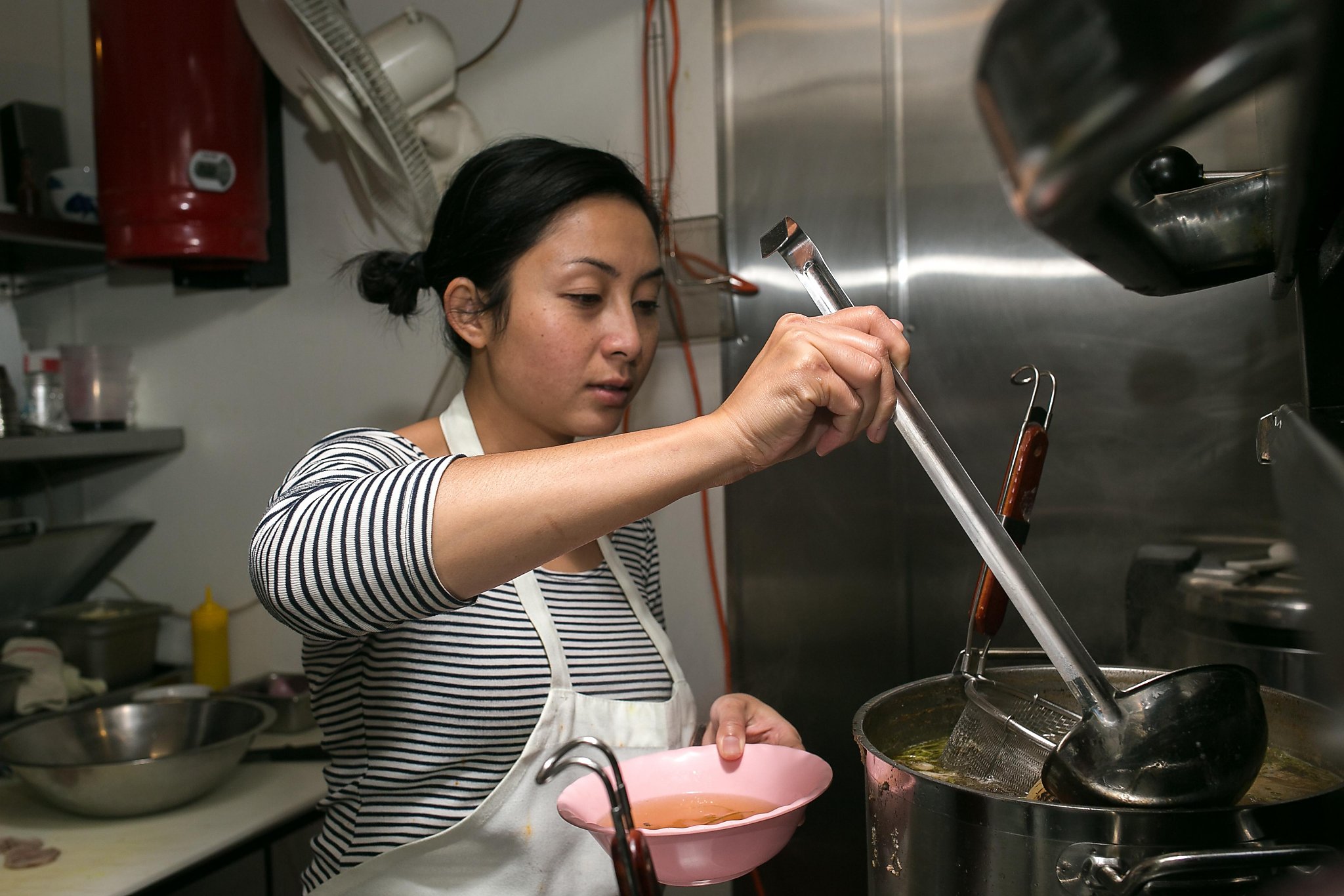 From pop-up to Emeryville kiosk to brick and mortar, the story of Oakland’s Nyum Bai has entered a new chapter. The Cambodian street eats concept is moving into the former Half Orange space in Oakland’s Fruitvale Village. It could be up and running... 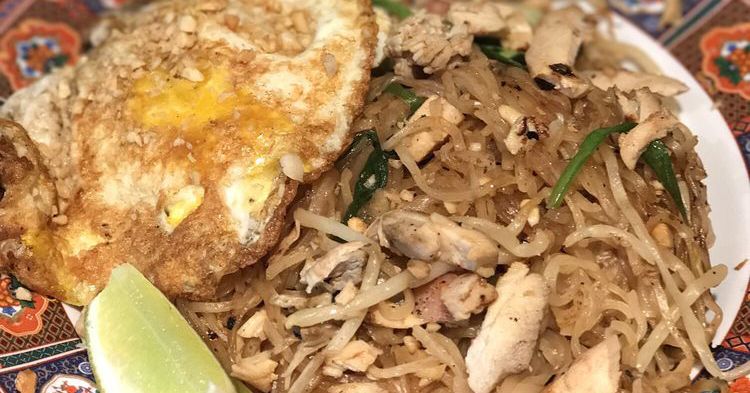 Headed to the Half Orange space in Fruitvale

My lunch report of the Fruitvale location. Soft opening since last Thursday. I think it is fully opened now?

We grabbed lunch at the newly opened Nyum Bai in Fruitvale Village, across the street from the Fruitvale Bart. Their new space is smallish inside- about 20 seats total across a few tables and counters. There is an outdoor seating area outside the front door that sits another ~20. Kuri mon: Chicken curry with kroeung paste, coconut milk. The curry was deeply aromatic from presumably the galangal, kaffir lime leaves and turmeric inside the kroeung paste. It was mildly hot. The sweet potato…