NYTimes- The Flavors That Unite Syrians

Interesting article about Syrians, their cooking, ingredients, recipes and the refugee situation. 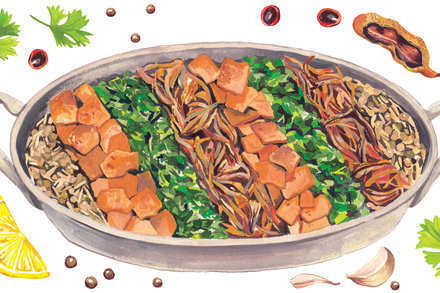 Opinion | Recipes From the Syrian Kitchen

Dishes and stories from people displaced by years of conflict.

I missed that piece. Thanks for the heads up!

Thanks, that was lovely. There are a lot of people from the Middle East (especially the Levantine countries) and North Africa here in Montréal, from all the religious communities and many origins. And Syria is particularly known for its exquisite food.

I’m reminded of an apocryphal story from the early 80’s Detroit.

At that time the best middle eastern restaurant in Detroit was run by a Lebanese acquaintance.

One day the Syrian counsel called him up to order a banquet with a whole lamb prepared in the Syrian manner. The counsel was very insistent on this point, and made sure my friend repeated his order precisely as regarded the Syrian lamb.

The evening of the big event arrived and commenced with belly dancing and numerous courses of mezes and plenty of raki.

Finally the big moment arrived and the lamb in all its greasy glory surrounded by safron pilaf and dates arrived on a huge platter that was placed in front of the counsel.

The counsel lifted the brain case to offer this choicest of morsels to his guest of honor, only to find the case was empty.

He called for my friend and inquired what in hades was going on.

To which my Lebanese friend replied, “Well you were very specific that you wanted the lamb prepared in the Syrian manner…”