NYTimes' article on the wait at Franklin's, Austin

The article is not a review of the meat, but about the long wait to get the meat. 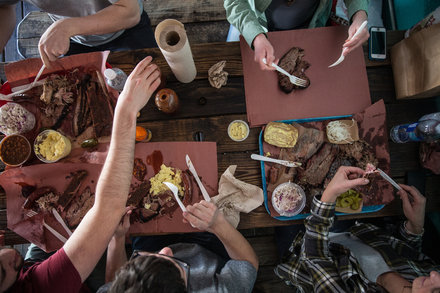 Want Some of This Texas Barbecue? Get in Line. For 3 Hours or Longer.

Waiting for hours in the food line at Franklin Barbecue in Austin, Tex., is a rite of passage for the famished and the faithful from all over.

Went to see my daughter in Austin. Drove from the airport to Franklins and at around 10:30am there was already a 3+ hr wait. We ended up going to La BBQ and waited an hour. La was very good. Stood in line with a BBQ guy from I think Sonoma who had paid someone to wait at franklins the day before. He said he would give franklins a very small edge on the brisket but was being very critical. The brisket and ribs were excellent at La. No remorse for not going to Franklins. i just couldn’t justify the wait.

I don’t wait in lines anymore. He seems like a nice enough guy, but Jeez. I’m not sure anything to eat is that desirable.

There’s been so much said about Franklin’s that I don’t think it could possibly live up to my now inflated expectation. I did drive by at 11 one day while in Austin and immediately discarded the idea to pick some up. Mueller in Austin makes a wonderful brisket.

I did the line about four years ago. We arrived at 9:30 am and were tenth or so in line. By 10:30 they already had walked the line taking not orders, but estimates and had put up the sold out sign. I have heard since that occasionally you can arrive at 1:30 and have a pretty short line. Of course, they may be out of some things by then, but they usually have brisket.

That said, I will usually go to John Mueller’s which I think is what Lambsy is talking about. It’s just a couple of blocks from Franklin and may have a short line, but just a short line. I really think it’s every bit as good though. His beef ribs are just something special.